Trending
You are at:Home»Herbs and Spices»12 Health benefits of Belladonna (deadly nightshade) 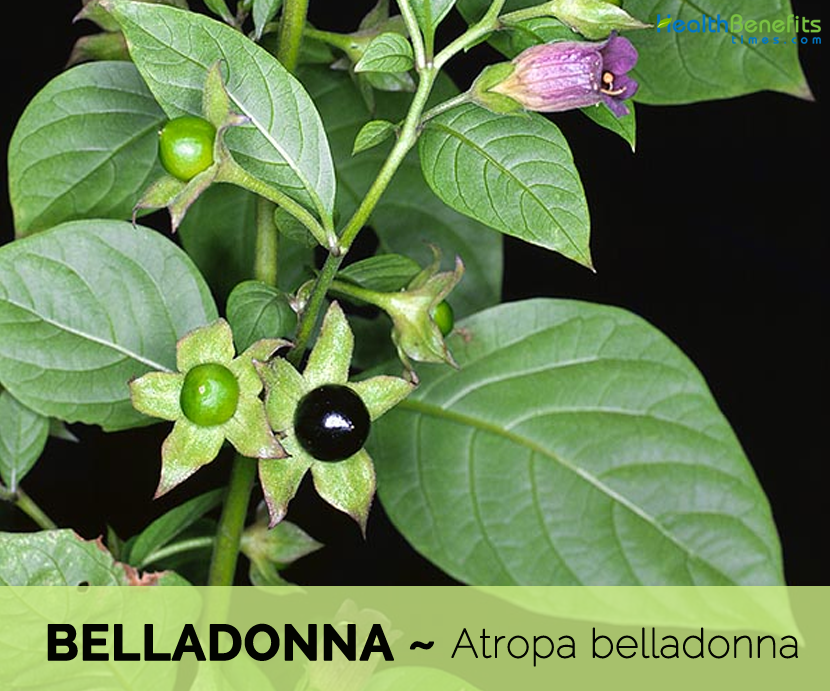 tropa belladonna, commonly known as belladonna, devil’s berries,  beautiful death, deadly nightshade Naughty Man’s Cherries, Divale, Black Cherry,  Devil’s Herb, Great Morel, Dwayberry, sorcerer’s berries, murderer’s berries, witches berries, is one of the most toxic plants native to Europe, SW Asia and NW Africa. It is a member of the nightshade (Salonaceae) family), which also includes eggplant, tomatoes, potatoes, and chili peppers. Its species name belladonna means beautiful lady in Italian. It is typically found in woods and thickets, but is also often found in disturbed areas, waste places, and roadsides where it typically spreads rapidly in a weed-like manner. It has naturalized in certain parts of the U.S., mostly in dumps, quarries and disturbed ground in parts of New York, Michigan, California, Oregon and Washington.

Foliage and berries are extremely toxic, containing tropane alkaloids. These toxins include atropine, scopolamine and hyoscyamine, which cause a bizarre delirium and hallucinations, and are also used as pharmaceutical anti-cholinergic. The herb when prepared and handled properly did have some valuable effects that could be considered “beneficial” for human health. Tinctures, decoctions, and powders derived from the belladonna plant have been in use for centuries, but due to the extreme toxicity of the plant, it is always recommended that you consult an herbalist or a medical professional before pursuing this ancient remedy.

Belladonna is a branching herbaceous perennial rhizomatous hemicryptophyte plant that grows often 1-1.5 m (occasionally up to 2 m) in height. The plant thrives in humid temperate climates to highly arid climates; they prefer mostly semi-arid climates and grow well in damp soil. Roots are branched, thick, fleshy, and white in color and about 15 cm or more in length. It has a purplish stem that is densely covered in short, fine hairs.  The fresh plant, when crushed, exhales a unpleasant odor, almost disappearing on drying, and the leaves have a bitter taste, when both fresh and dry.

The leaves are dull, darkish green in color and of unequal size, 3 to 10 inches long, the lower leaves solitary, the upper ones in pairs alternately from opposite sides of the stem, one leaf of each pair much larger than the other, oval in shape, acute at the apex, entire and attenuated into short petioles.

Flower appears singly, in the axils of the leaves, and are of a dark and dingy purplish color, tinged with green, large (about an inch long), pendent, bell-shaped, furrowed, the corolla with five large teeth or lobes, slightly reflexed. Flowering normally takes place in between June and September.

The Belladonna plant produces shiny, black berries size like small cherry and about 1.5 centimeters (0.59 in) in diameter. It is full of sweet, dark, ink-like juice. They are green when young turning to shiny shade of black as they mature. They have sweet taste and consist of hundreds of seeds that look similar to tomato seeds. The berries are often consumed by animals as a way of seed dispersal despite their toxicity to humans.

Atropa belladonna is native to south central Europe, northwestern Africa, and southwestern Asia. The distribution limits are between 32° and 55° N latitude, from sea level in the north of its range (e.g. England) to 1700 m or more in the Mediterranean region. It primarily occurs in areas with well-drained, calcareous soil and shaded woodland habitats, but can also occur on dry, sunny scrubland sites.

It has been introduced and naturalized in a few other areas, and is occasionally found as a weedy species north to southern Scandinavia.

Belladonna, also called Atropa Belladonna, is a commonly used herb for the management of several diseases such as arrhythmias, asthma, and joint problems. However, in spite of its toxicity, this herb offers several health benefits. The chemicals derived from belladonna can also be used as pharmaceutical anti-cholinergic in the management of several diseases. Listed below are few of the health benefits of belladonna

Although consuming deadly nightshade may not sound like the most pleasant experience, belladonna has been known to cut down on mucus production in the sinuses, and helps to clear out the respiratory tracts of excess phlegm. This helps to reduce respiratory illnesses, as many of the bacteria that get stuck in that phlegm and mucus cause those conditions.(1)

A bit of the belladonna tincture when applied to the temples can rapidly alleviate headaches and migraines. The powerful compounds should be kept away from the eyes and mouth, however, particularly when used in a concentrated form as a topical solution.(2)

The sedative nature of belladonna does tend to make it quite effective for reducing strain, stress, and anxiety in people suffering from chronic cases. It can also work to improve mood and alleviate feelings of depression. While this can be a slightly dangerous herbal additive if you are already taking sedatives or anti-depressants, belladonna is related with releasing certain pleasure hormones, like dopamine, which can induce this feeling of mental peace.(3)

Hormone levels in a woman’s body can fluctuate dramatically before and after menstruation and menopause, causing a number of physical and psychological changes. Throughout history, Atropa belladonna has been recommended for treating the symptoms of these two feminine issues, mainly hot flashes, cramping, mood swings, and cravings.(4)

Continuous irritation of the Vagus nerve is a common cause of persistent hiccups. Though hiccups seem to be a mild disorder, it may cause severe discomfort. It also causes pain in the chest and abdomen due to the constant twitching of the diaphragm and the muscles in these regions.

Atropa belladonna can help to reduce the bouts of hiccups by producing a soothing effect on the diaphragm. It also reduces the irritation of the nerve. It relaxes the muscles and prevents continuous twitching thus relieving hiccups.

Numerous people are suffering from Irritable Bowel Syndrome and other gastrointestinal issues, but belladonna tinctures have been shown to considerably soothe the stomach and reduce the cramping and discomfort that IBS often causes in so many people. It is due to the anti-inflammatory and sedative properties of the plant, which not only make them beneficial, but also deadly in too large of a quantity.(5)

Atropa belladonna has also been turned throughout history to improve quality of sleep. Using too much may give you the big sleep, but in suitable doses, you can cure insomnia and restlessness problems, which are all too common in today’s fast-paced world.(6)

Belladonna is an effective cure for the management of fibromyalgia. It possesses muscle relaxant property. It helps to reduce the spasm of the muscles and relieves pain and muscular stiffness. It can also be used to obtain relief from muscle cramps.

Some of the antispasmodic benefits were explained earlier, but another important effect of this particular quality of Atropa belladonna is its prevention of muscle spasms, which protects the entire body, including the heart and the bowels (digestion).(7)

Whether topically or orally consumed (in small, measured quantities), Atropa belladonna can significantly reduce pain and acts as a powerful analgesic. This use of belladonna may be one of the oldest known applications, with the exception of making poison-tipped arrows, of course. Whether you’ve strained a muscle during an athletic ability or suffer chronic pain somewhere else in the body, belladonna can help.(8)

Research has shown that Atropa belladonna’s effects on the respiratory system also make it an effective remedy for certain allergic reactions, mainly hay fever. By decreasing spasms and clearing out the sinuses, deadly nightshade might be just the thing to get rid of those sneezing attacks come spring!(9)

When you suffer from an affliction of the nervous system, it can often be an uncontrollable and embarrassing process where you truly feel that there is nothing you can do. Spasms, muscular issues, and general functional can decrease. Luckily, as an antispasmodic and sedative substance, nightshade has been known to soothe the nervous system and relieve the symptoms from major nervous system disorders and diseases.(10)

Dosage of Atropa Belladonna (Deadly Nightshade) depends on the parts and derivatives used in the different systems of medicines. Here are some examples of belladonna dosage for your references.

The dosage of belladonna given above is a single dosage. Herbalist can recommend twice or thrice a day according to your health problems and symptoms.n