by Glossary
in D
0 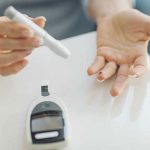 A metabolic disorder associated with inadequate secretion or utilization of insulin and characterized by frequent urination and persistent thirst.

A hereditary metabolic disease, characterized by an inadequate activity of insulin, affecting the regulation of normal blood glucose levels.

Metabolic disorder resulting in high blood sugar and discharge of large amounts of sugar in the urine.

Properly diabetes mellitus, it is a disease characterized by high blood sugar levels and sugar in the urine. Diabetes is really several disorders, generally broken down into juvenile onset and adult onset. The first, currently called insulin-dependent diabetes mellitus (IDDM or Type I), is somewhat hereditary, and results from inadequate synthesis of native insulin or sometimes from autoimmunity or a virus, and occurs most frequently in tissue-types HLA, DR3, and DR4. These folks tend to be lean. The other main group is known as noninsulin-dependent diabetes mellitus (NIDDM or Type II). It is caused by a combination of heredity, constitution, and lifestyle, where high blood sugar and high blood fats often occur at the same time, and where hyperglycemic episodes have continued for so many years that fuel-engorged cells start to refuse glucose, and the person is termed insulinresistant. These folks are usually overweight, tend to have fatty plaques in their arteries, and usually have chunky parents.

A disorder in which the body’s ability to use sugar is impaired because of inadequate production or utilization of the hormone insulin.

A disease that prevents the body from properly using sugar. The condition may result from the failure of the pancreas to produce insulin or the body’s inability to respond to the insulin it does produce. The most common form in older people is what has been traditionally called adult onset or noninsulin dependent. However, this type has become increasingly common in young people in recent years.

One of a group of diseases which cause the body to produce large amounts of urine.

A condition characterized by inability to regulate the use of glucose, often because of an insufficiency or ineffectiveness of insulin, a hormone secreted by the pancreas.

Any disorder of metabolism causing excessive thirst and the production of large volumes of urine. Used alone, the term most commonly refers to diabetes mellitus.