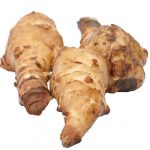 The Jordan almond is not from Jordan, but at least it is an almond. The Jerusalem artichoke, on the other hand, is not only not from Jerusalem, it is not even an artichoke. Instead, the Jerusalem artichoke is a tuber, much like a potato, and is native to North and South America. The vegetable was introduced to Europe in 1617 as topinambour, named after a tribe in South America; however, the Italians soon started calling it girasole articiocco, meaning sunflower artichoke, because it tasted like an artichoke and because its flower turned throughout the day to follow the path of the sun. Literally, the girasole part of girosole articiocco means sun turner, the gira part being related to our word gyre and the sole part to our word solar. However, this lovely origin was lost on the English who, around 1640, began mistaking the word girasole for Jerusalem and thus accidentally renamed the vegetable.