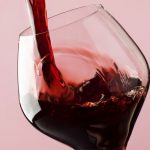 The ancient Romans called fermented grape juice vinum, the source not only of the English wine—first recorded in the ninth century—but also of the German wein, the Dutch wijn, the French, Swedish, and Danish vin, the Italian, Spanish, and Russian vino, and even the Welsh gwin. The Latin word for wine—vinum—also gave rise to vinea, the Roman name for a vineyard; French adopted this word as vigne and used it to mean trailing plant, which is the sense it retained when it entered English as vine in the fourteenth century. The French vigne gave rise to another important word: vignette, a book illustration surrounded by a border of twisting vine; English borrowed this word in the mid eighteenth century, first as the name of an ornamental illustration, and later as the name of a written sketch of an interesting event. Another word arose from the practice of allowing wine to undergo a second fermentation until it became what the French called vin egre, meaning sour wine. The French vin egre became, of course, the English vinegar, first recorded in the fourteenth century. Vinaigrette, literally meaning little vinegar, appeared in English in the late seventeenth century but referred not to a salad dressing but to a small two-wheeled carriage similar to the carts once pulled through the streets of Paris by vinegar merchants. It was not until the late nineteenth century that vinaigrette acquired its current culinary sense. Incidentally, the egre part of the French vin egre—the part that means sour—derives from the Latin acer, meaning sharp, which is also the source of eager, meaning to have a sharp or keen desire.