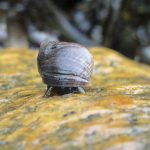 The winkle is a small, edible snail, one usually poached and then eaten with bread and butter. Its name, first recorded in the mid sixteenth century, is short for periwinkle, which dates back another fifty years to the early sixteenth century. Periwinkle in turn derives from the Old English pinewinde, meaning shellfish, formed by combining the Latin pina, the name of a species of mussel, with the Old English wincle, meaning winch; the name was inspired by the resemblance of the snail’s spiralling shell to a winch, a large spool used to reel in rope or chain. Also related to the Old English wincle is the word wink, the connection being that when you wink, your eyelid “curves” over your eye like an arc in a spiral. Periwinkle, incidentally, is also the name of a trailing plant better known as myrtle; this periwinkle, however, probably derives its name from the Latin per vincire, meaning to bind thoroughly, a name prompted by the plant’s ability to extend itself over a large area and stubbornly resist removal.