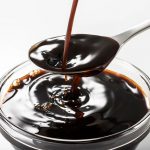 Worcestershire sauce takes its name from the English county—or shire—of Worcestershire, the home of the condiment’s inventor, Sir Marcus Sandys. With the assistance of the English grocers, Lea and Perrins, Sandys began selling his sauce in 1838, which by the 1860s had also come to be known as Worcester sauce, Worcester being the town that gave the county of Worcestershire its name. The town of Worcester derives its name from a compound formed from the Celtic weogoran, meaning dwellers near the winding river, and the Old English ceaster, meaning Roman camp, which in turn derives from the Latin castra, meaning camp. Accordingly, if Worcestershire sauce seems like a mouthful, be grateful that you do not have to ask your host to pass you the~county-of-the-Roman-camp-near-the-dwellers-by-the-winding-river sauce.