by Glossary
in Y
0 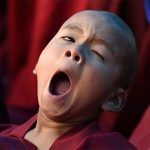 The act of opening the mouth wide without conscious control and slowly releasing a deep breath, usually a sign of tiredness or boredom.

Reflex, usually triggered by boredom, fatigue, drowsiness, or seeing someone else yawn; the mouth is opened wide and air is drawn in and released slowly.

Involuntary deep inhalation of air with the mouth open. Although its exact purpose is unclear, yawning frequently occurs at the same time as stretching and is usually caused by drowsiness, fatigue, or boredom. It is also often caused by suggestion — if an individual sees another person yawning, he or she may yawn as well. Repeated yawning is usually a sign of drowsiness, but it may also be a sign of depression.

A reflex action in which the mouth is opened wide and air is drawn into the lungs then slowly released. It is a result of drowsiness, fatigue, or boredom.

An involuntary opening of the mouth, which is accompanied by marked dilatation of the pharynx, a characteristic distortion of the face and usually stretching of the limbs. The cause and function of yawning are quite obscure. It is usually a sign of drowsiness or boredom, but it it may be the result of raised concentrations of carbon dioxide (CO2) in the blood the physiological aim being to cut the amount of CO2 and raise the level of oxygen in the blood.