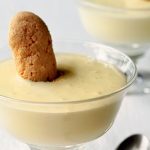 English has two names for the foamy dessert made by whisking together egg yolks, Marsala wine, and sugar: zabaglione and sabayon, both deriving from the same source but entering English via different routes. The common source of the words is probably the Latin sabaia, the name of a drink that originated along the eastern coast of the Adriatic Sea. In Italian, sabaia became zabaglione, the ione ending of the Italian word being an augmentative suffix that causes the word to mean big sabaia; English adopted this name of the dessert at the end of the nineteenth century. French, however, also adopted this Italian name, changing it to sabayon in the process; in the early twentieth century, English adopted this French name as well, and the two terms—sabayon and zabaglione—have existed side by side ever since.