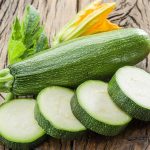 What North Americans call a zucchini, the British call a courgette. Although they derive from different languages, these two words are alike in so far as they are both diminutives of words meaning gourd: the Italian zucco and the French courge. Zucchini, however, is not only a diminutive but also a plural form: accordingly, if you are purchasing just one of these vegetables you should—in order to be precise, pedantic, and puzzling all at once—refer to it as a zucchino. The words zucchini and courgette appeared in English in the late 1920s when the vegetable was introduced to British and North American markets.