Trending
You are at:Home»Facts»Yeast benefits and nutrition 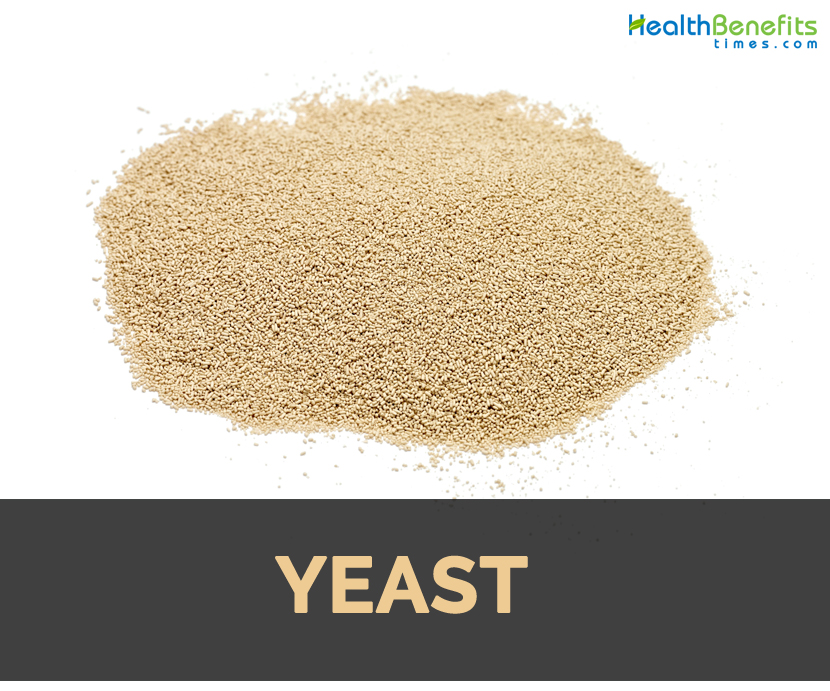 Yeasts are single celled and eukaryotic microorganisms which are classified to be the member of fungus kingdom. First yeast was originated hundreds of millions of years ago. Today, 1500 species are identified. They are unicellular organisms which evolve from multicellular ancestors having some species to develop multicellular characteristics by forming strings of related budding cells called false hyphae or pseudohyphae. The size of yeast depends on environment and species measuring 3 to 4 µm in diameter though some yeasts measures 40 µm in size. Yeast reproduces asexually by mitosis and many achieve by asymmetric division process called budding. It has single celled growth habit that could be contrasted with molds which grow hyphae. The species which take both forms are known as dimorphic fungi.

The yeast species Saccharomyces cerevisiae, by fermentation, changes carbohydrates to carbon dioxide or alcohols. For 1000 years, carbon dioxide is used in baking or alcohol in alcoholic beverages. Yeasts does not form phylogenetic or single taxonomic grouping. Yeast is used in manufacturing food to cause fermentation or leavening.

The term yeast is derived from Old English gyst, gist or from Indo-European root yes which means foam, boil or bubble. Perhaps yeast microbes are earliest domesticated organisms. Archaeologists found baking chambers and early grinding stones for yeast raised bread and drawings of 4000 year old breweries and bakeries. Anton van Leeuwenhoek, a Dutch naturalist, microscopically observed yeast but it was not considered to be living organisms but a globular structures. They were in doubt that whether yeasts were fungi or algae but Theodor Schwann in 1837 identified them as fungi.

In the late 18th century, two yeast strains have been identified for brewing: S. carlsbergensis (bottom-fermenting yeast) and Saccharomyces cerevisiae (top-fermenting yeast). Commercially, S.cerevisiae has been sold by Dutch for making bread since 1780 but around 1800, Germans started to produce S.cerevisiae in form of cream. Yeast blocks industrial production was reinforced by introduction of filter press in 1867. Baron Max de Springer advanced manufacturing process for forming granulated yeast, a technique which was used till First World War. In United States, airborne yeasts are used exclusively till commercial yeast was displayed in Philadelphia at Centennial Exposition in 1876. Charles L. Fleischmann viewed the product and process to use it and serving resultant baked bread. The yeast species, Saccharomyces cerevisiae has been used for long time. It is used as an additive for fermenting alcoholic drinks such as beer. It is regarded as a model organism for modern cell biology.

Let us know about the health benefits which yeast offers:

Talking about probiotic foods and yogurt, lactic acid based bacteria are most common. Similarly yeast provides similar safety against toxins and pathogens. Beta glucan fibers found in cell walls of yeast provide favorable effects on immune system. Yeast is much easy to make and is healthy too. In addition, yeast has more diverse enzyme profile referring yeast could provide more diverse benefits to immune system. It is a perfect substitute for those having lactose intolerance.

Research have explored that use of baker’s yeast helps to protect from cancer. The consumption of yeast results in death of tumor cells and is observed in both colon and tongue cancer cells. It assures an alternative therapeutic option for gastrointestinal cancer. Study shows that heat destroyed non-pathogenic yeast such as brewer’s yeast and baker’s yeast which persuaded apoptosis of breast cancer cells. It clues that yeas has the potential to hold the spread of cancer.

Yeast contains selenium which is a vital mineral containing antioxidant properties counteracting the free radical effects/damage to the body. Insufficient presence of selenium in the body avails the chances of heart diseases and even cancer. Ample amounts help the body to prevent damage associated with toxins in food and environment. Yeast is a smart way to add this nutrient in smaller amounts.

It is the mixture of yeast and starch having moisture content about 70%. They should be kept refrigerated. It is creamy white or crumbly having fresh and yeasty smell.

This yeast has all the moisture been removed by air. It makes the yeast dormant and could be stored in dry storage without refrigeration for several months. The active dry yeast is rehydrated in water having temperature of 40’C (105-110’F). It is known as activating yeast. The foam in surface of water with yeast means it is active and could be added to dough.

It is not needed to get activated. Instant dry yeast may not dissolve fully during mixing. Then the yeast is moistened in 5 times its weight in water.