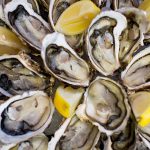 Although ostracism and Osterizer both resemble the word oyster, only one of them is actually related to the name of that tasty mollusc. The ancient Greek word for oyster was ostreon, a word that derived from an Indo-European source meaning bone. From the same Indo-European source developed the Greek word os, meaning bone (as in osteopath), and the Greek word ostrakon, a word denoting shell-like fragments of broken pottery. Far from being trash, such pottery fragments were useful because they could be written on, as they were when the members of the Greek assembly cast their votes on whether some troublemaker should be sent into exile; if, after counting, enough of the pottery shards had been inscribed with the unpopular fellow’s name, he was banished from the state for ten years. This process became known as the ostrakismos, which became the English ostracism in the sixteenth century, about two hundred years after the word oyster was adopted in the mid fourteenth century. The food processor known as the Osterizer, on the other hand, takes its name from the man who patented it, John Oster; Oster’s ancestors acquired their surname not because they were molluscs, but because they were hostlers, people who looked after the horses belonging to a hotel’s guests.