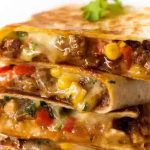 In Spanish, the word queso means cheese, and the endings ilia and illo are suffixes used to form the feminine or masculine diminutives of a word, just as French and English often use the diminutive ette, as in kitchenette. Thus, quesadilla, the name of a turnover filled with cheese, means little cheese. The ilia diminutive is also found on Spanish words such as tortilla, vanilla, and sarsaparilla (also spelt sassparilla), all of which are little versions of something bigger. The word quesadilla first appeared in English in 1944.