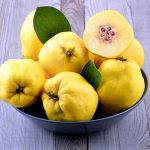 The quince, a relative of the apple and pear but too bitter to be eaten uncooked, derives its name from Cydonia, a port on the coast of Crete now known as Khania. Because the fruit was exported from Cydonia, the ancient Greeks called it melon Kudonion, meaning Cydonian apple. This name entered Latin as cydoneum, which later became cotoneum and was then adopted by French as cooin. In the late fourteenth century, English borrowed this French name, spelling it quine and creating a plural form spelt quince. Before long, however, people forgot that quince was supposed to be the plural form and began using it as a singular.