Trending
You are at:Home»Herbs and Spices»Facts and benefits of Aga (Fly Agaric) 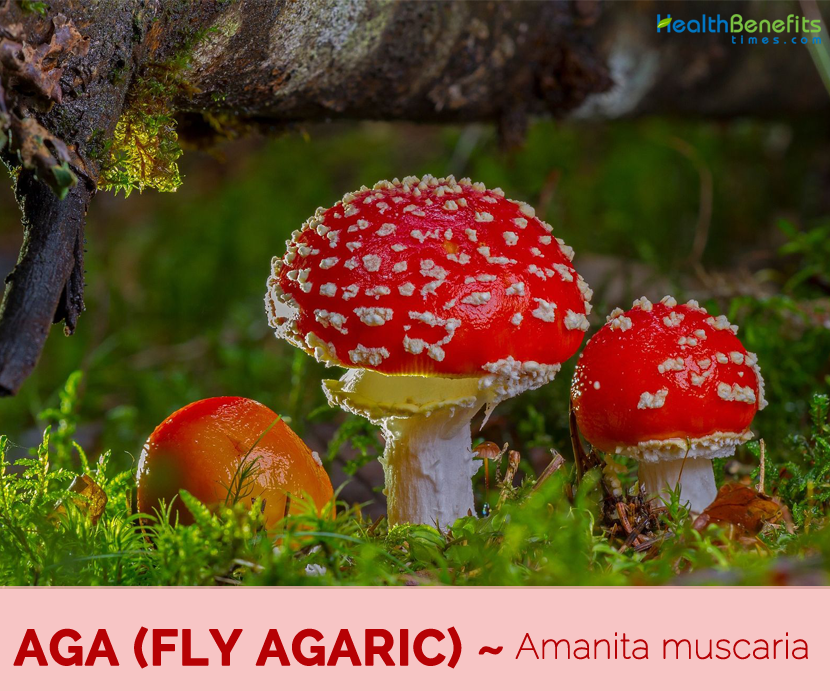 Amanita muscaria, also known as fly agaric, fly Amanita, bug Agaric, Amanite Tue-Mouches, Fausse Oronge, Matamoscas and Soma, and is a psychoactive mushroom which is found growing widely in the temperate and boreal regions of the Northern Hemisphere. The mushroom has been widely transported into the southern hemisphere, including New Zealand, Australia, South America and South Africa, generally to be found under introduced pine trees. Although un-related to other psychoactive fungi such as the Psilocybe species it has also been used in shamanic cultures to connect with the spirit world. The main psychoactive compound in this mushroom is muscimol, and its effects are different to those of psilocybin-containing mushrooms.

It is a poisonous and psychoactive basidiomycete fungus, one of many in the genus Amanita. The name fly agaric derives from the fact that since medieval times it was commonly used as a fly killer, broken up in milk or sprinkled with sugar.

Fly Agaric is a poisonous and psychoactive basidiomycete fungus that forms a symbiotic relationship with various coniferous and deciduous trees such as birches, pines, and spruces, and can often be found growing near them. It is normally found growing in sandy and acidic soils.  There are many different varieties of amanita muscaria with varying appearances.

Fly agaric fruiting bodies emerge from the soil looking like a white egg, covered in the white warty material of the universal veil. Dissecting the mushroom at this stage will expose a characteristic yellowish layer of skin under the veil which assists in identification. As the fungus grows, the red color appears through the broken veil and the warts become less prominent; they do not change in size but are reduced relative to the expanding skin area. The cap changes from globose to hemispherical, and finally to plate-like and flat in mature specimens. Fully grown, the bright red cap is usually around 8–20 cm (3–8 in) in diameter, although larger specimens have been found. The red color may fade after rain and in older mushrooms.  After emerging from the ground, the cap is covered with numerous small white to yellow pyramid-shaped warts. These are remnants of the universal veil, a membrane that encloses the entire mushroom when it is still very young.

The free gills are white, as is the spore print. The oval spores measure 9–13 by 6.5–9 μm, and are non-amyloid, that is, they do not turn blue with the application of iodine.

The stipe is white, 5–20 cm high (2–8 in) by 1–2 cm (0.4–0.8 in) wide, white, cylindrical, usually slightly felty-scaly, with a well-developed, white or yellow-edged ring or annulus, and a bulbous base bearing scale-like remains of the volva. Between the basal universal veil remnants and gills are remnants of the partial veil (which covers the gills during development) in the form of a white ring. It can be quite wide and flaccid with age. There is generally no associated smell other than a mild earthiness. 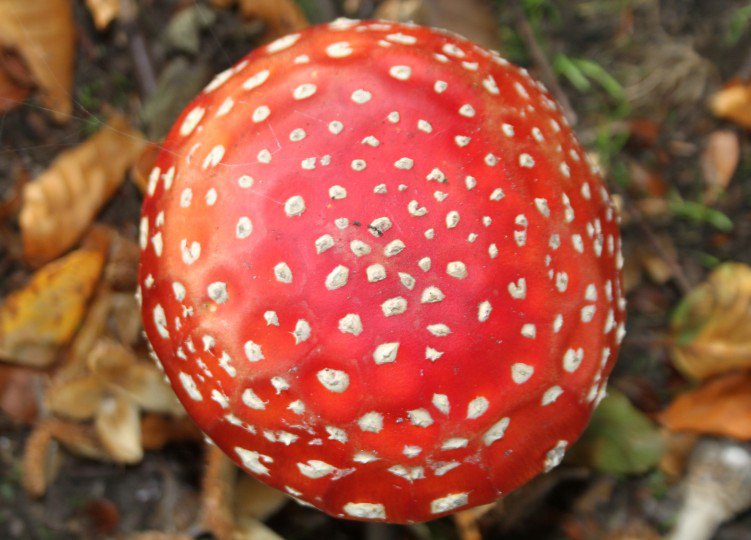 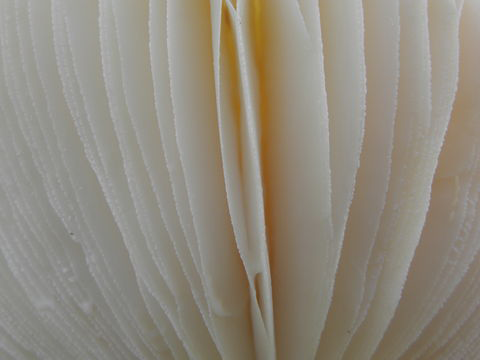 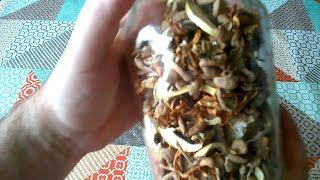 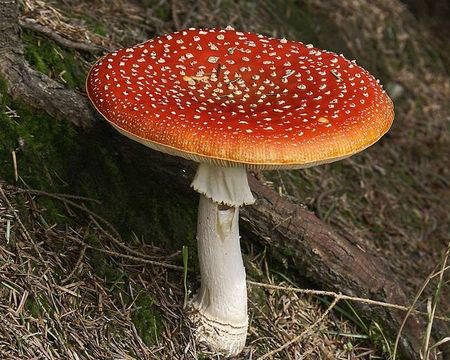 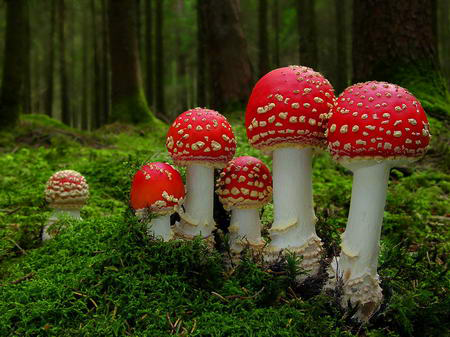 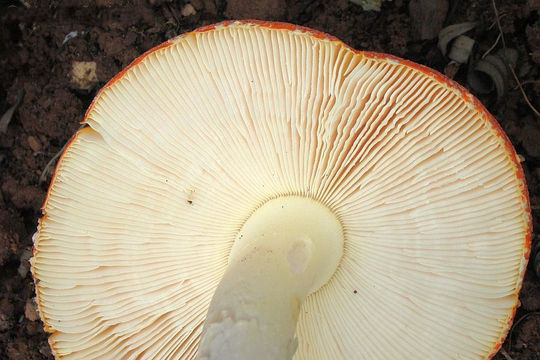 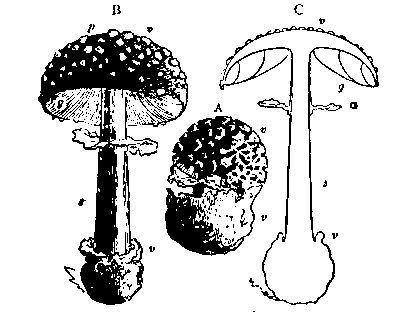 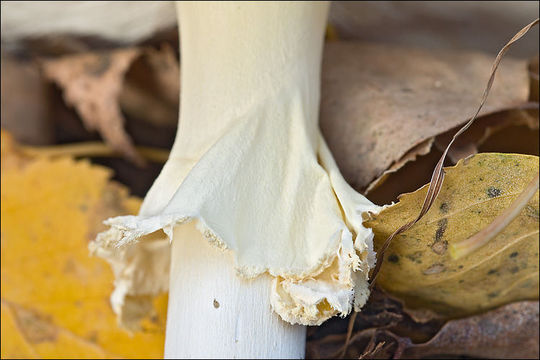 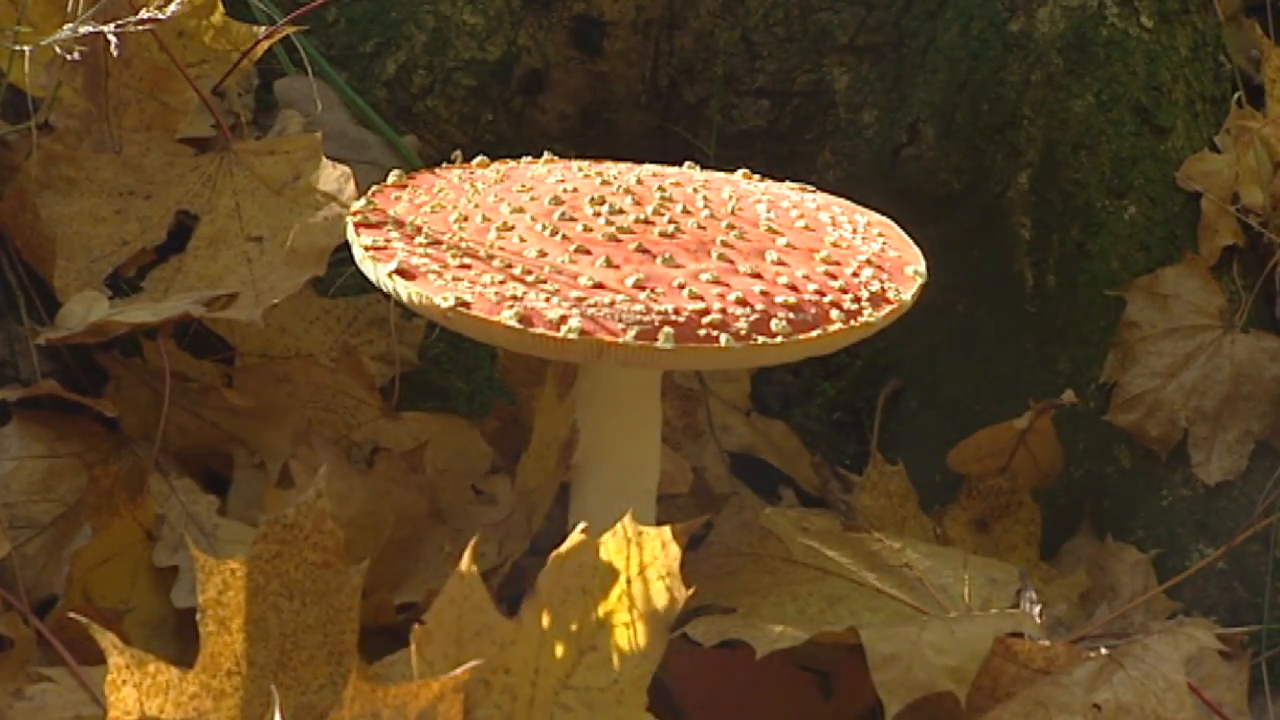 Wash the mushroom thoroughly. It doesn’t matter if the white spots wash off. Try not to get the gills wet though, as they take a long time to dry again.

Cut out any bad bits or bits with wormholes in. You can use these to spread the fly agaric spore to another birch, oak or pine.

There are different ways to prepare and preserve the mushroom:

Use a skewer or thin stick to pierce the mushroom along its central axis. Leave on the skewer or thread onto a string. The image shows a Siberian rig. Dry in the hot air above a fire. This will take several hours, perhaps even more than a day. Once dry, keep in an airtight container, preferably with some desiccant in.

Break off pieces as required eating or crumbling into tea.

Cut the mushroom into thin pieces, around 2mm thick. They will dry more easily and quickly this way. Dry in a food dehydrator, or in the warm air above a fire, or in a warm airing cupboard.

Overall it is probably recommended to use a food dehydrator. They’re so easy to use. You can dry all sorts of other things in them as well, other plants to help treat your chronic illness, or fruit and vegetables for healthy treats. An open fire in the center of a yurt would be best, but without that option, or an always-hot Aga, nothing is as easy as a food dehydrator.

Dry until the mushroom pieces are like crisp bread, with all moisture gone. This will take several hours. After that store it in an airtight container preferably with some desiccant. Eat a piece or crumble into tea as required.

Cut the mushroom into small pieces (around 2cm square) and place in a jar. Cover with vodka or another 37-40% spirit. Shake a few times a day for 10-14 days. Filter through a muslin sheet. Store the mushroom vodka in a cool dark place.

Apply externally to relieve sciatica and other pain, including joint pain and swollen lymph nodes. The tincture can also be applied to external infections, for example nail fungus, and skin conditions found in Lyme disease.

Drops can be applied under the tongue to improve cognition in the short term.

The leftover mushroom pieces can be dried or cooked and eaten as required, though they won’t be as strong as the ones in choice 2 above.

Fry the mushroom, preferably in coconut oil, for around ten minutes on a medium heat. Cut into small pieces and freeze. Pieces can be eaten as required.

Three small fresh pieces of mukhomor is good for sore throat and cancer.

Preparation for arthritis: Place several young A. Muscaria into an airtight container. Put container into a cool dark place (like a basement) until liquid comes out of mushrooms. Take a mushroom in hand, squeeze out moisture and place the pulp on arthritis. Bandage overnight. Mushroom body can be replaced in liquid and will last a long time.

Dosage is an individual matter, changing not only from person to person, but also for the same person at different times, depending on their current neurotoxin load. The amount of muscarine (active acetylcholine chemical) present in the mushroom also varies, from one mushroom to another, and even within the same mushroom. It’s best to take a small amount at a time and monitor effects.

Rub in as much as is required to cover the target areas. If the pain or discomfort is relieved, this is likely to last for hours. Repeat as required.

Under the tongue – a few drops under the tongue. The effect will be almost immediate. Repeat as required, but don’t be desirous to overdo it.

Some Legal issues regarding Fly Agaric

A. muscaria grows naturally and is legal to grow, sell and consume in most parts of the world. It is, however, restricted within some countries.