Trending
You are at:Home»Herbs and Spices»Traditional uses and benefits of Climbing Dayflower 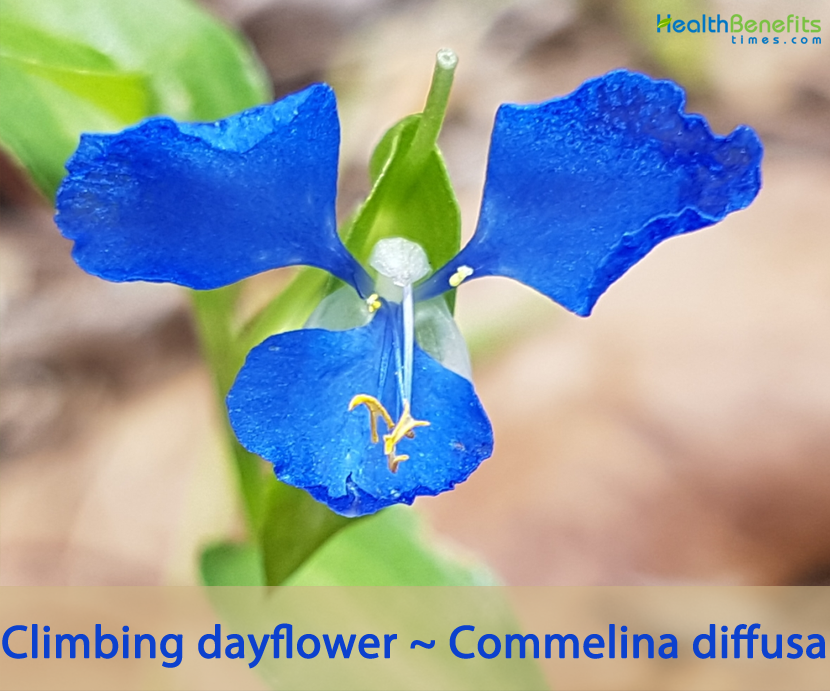 In China the plant is used medicinally as a febrifuge and a diuretic. Blue dye is also extracted from the flower for paints. In the Hawaiian Islands, it is known as “honohono grass”, although it is technically not a grass. “Honohono” refers to the alternating structure of the leaves. At least one publication lists it as an edible plant in New Guinea.

The soft stems are usually somewhat fleshy (i.e. slightly succulent) and are mostly hairless (i.e. glabrous). These stems are up to 40 cm or more long and regularly produce roots at their joints (i.e. nodes) if they are in contact with the soil surface (i.e. they are stoloniferous).

The alternately arranged leaves have a sheath at the base (1-2 cm long), which encloses the stem. At the top of this sheath is a line of short greenish or whitish-coloured hairs. The leaf blades are 3-12 cm long and 0.8-3 cm wide and are egg-shaped in outline (i.e. ovate) or somewhat elongated in shape (i.e. lanceolate) with entire margins and pointed tips (i.e. acute or acuminate apices). North American populations tend to have smaller leaf size, typically measuring 1.5 – 5 cm long and 0.5 -1.8 cm wide. These leaves are mostly hairless (i.e. glabrous) and are usually light green in color. The leaves are sub sessile (i.e. having a very small petiole) with a leaf sheath striped with red and covered with hispid pubescence.

The flowers are borne in small clusters (i.e. cymes) in the upper leaf forks that are subtended by a folded hairless bract (i.e. a glabrous spathe). This green spathe is 1-2 cm long and is fused together on one side, while the other side is open. The flowers have three small pale bluish coloured sepals and three larger bright blue (rarely white) petals. Two of the petals are very conspicuous (about 12 mm long), while the other is smaller (about 6 mm long). Each flower has three yellow stamens and two or three partially-formed stamens (i.e. staminodes). The flowers also have an ovary topped with a slender blue style. Flowering occurs in between July and September. 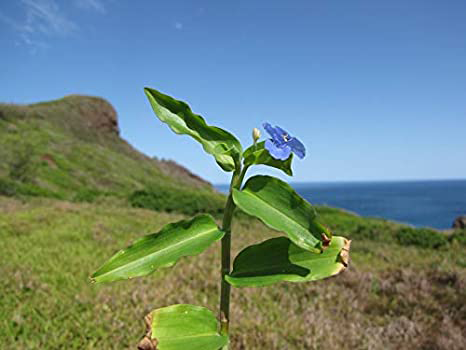 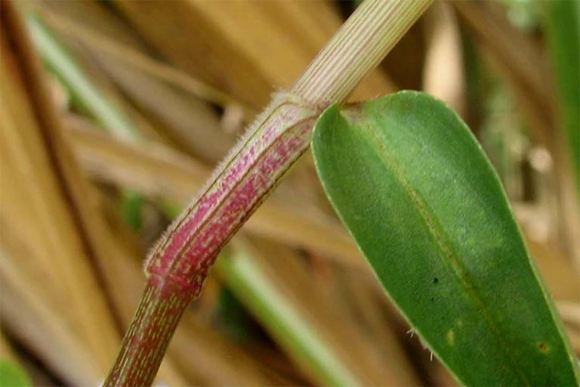 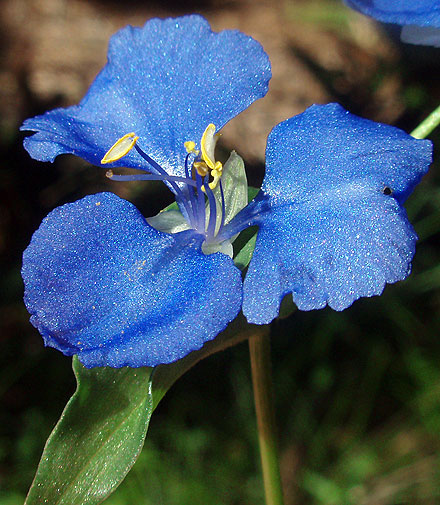 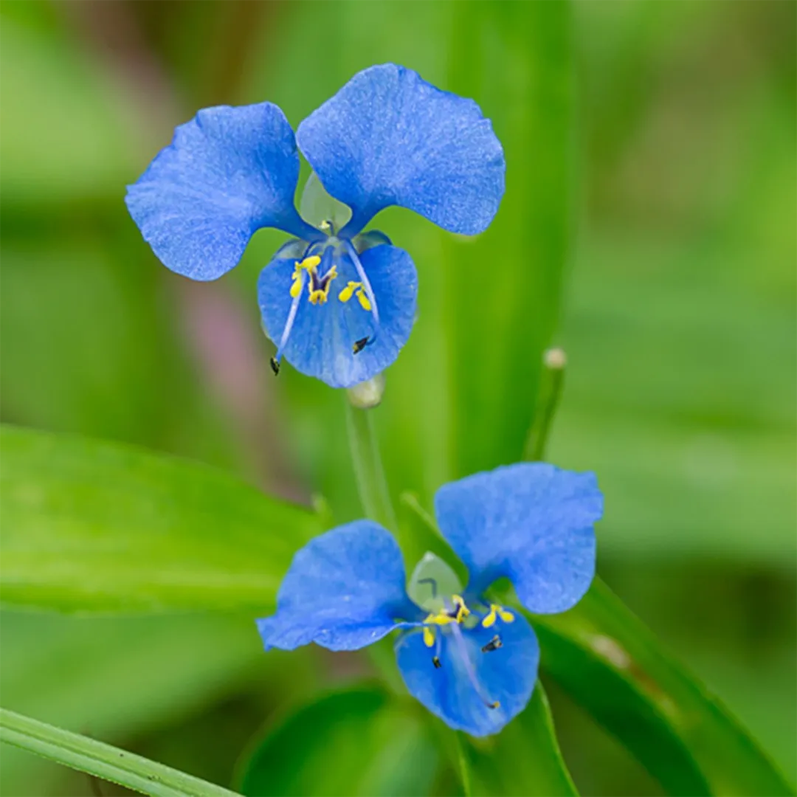 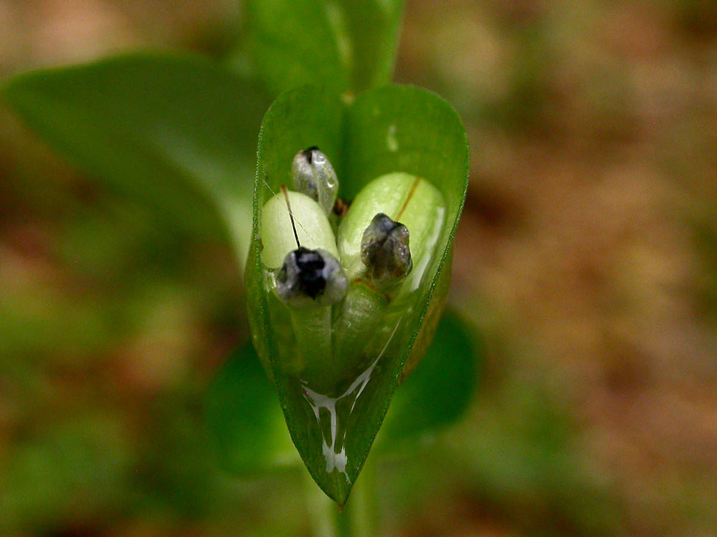 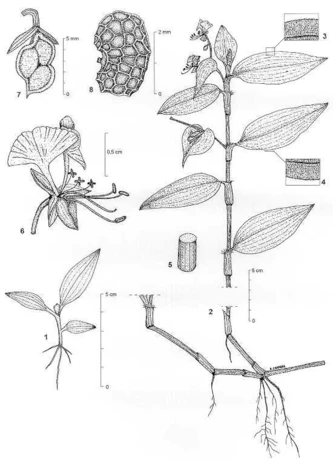 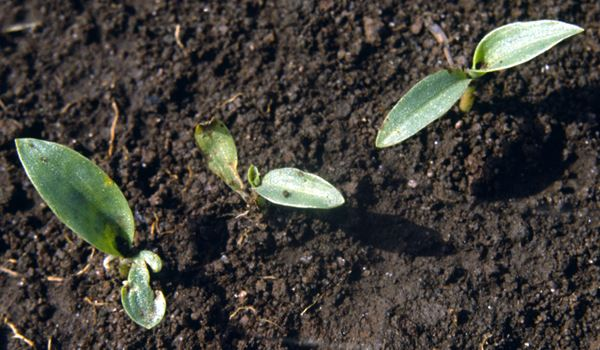 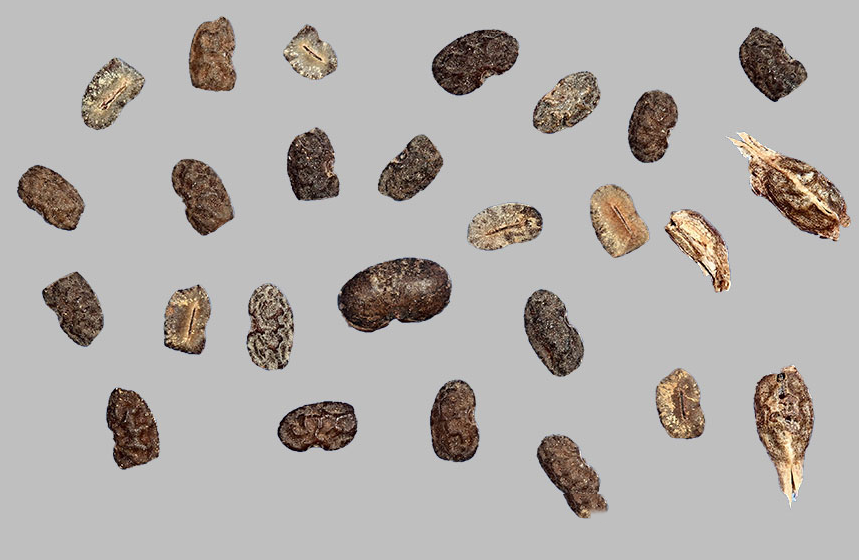 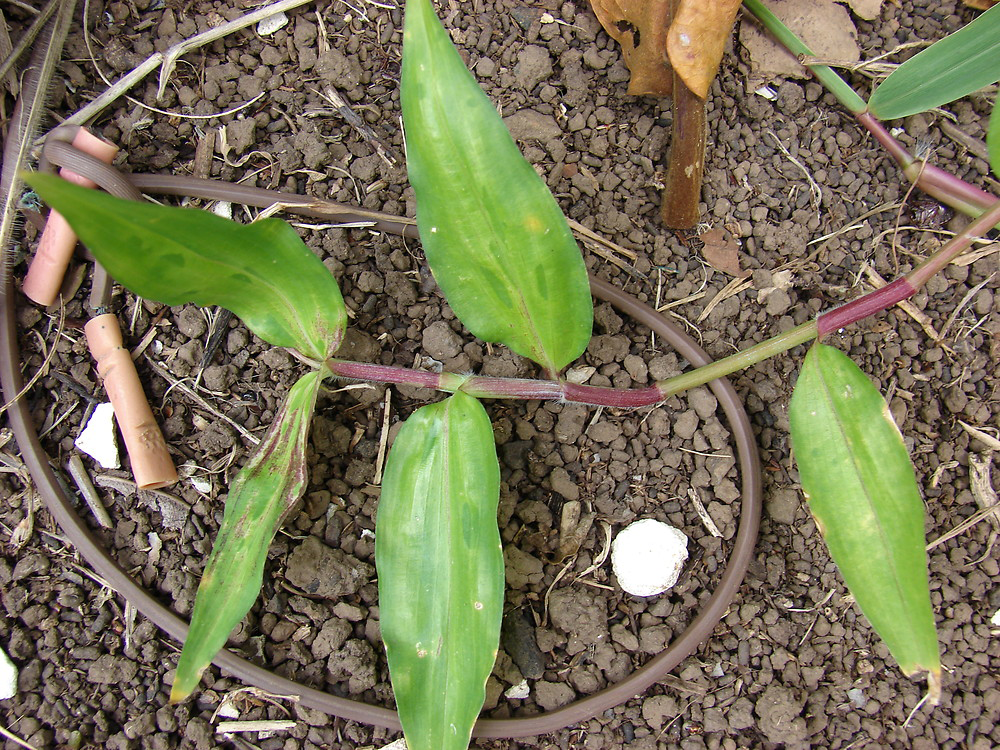 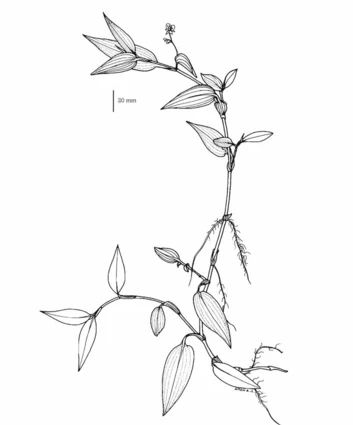 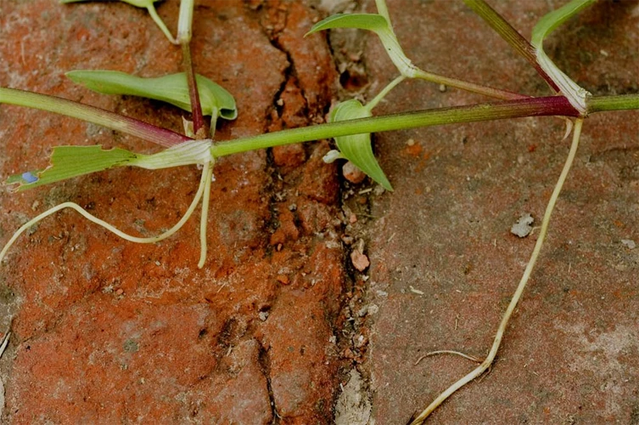 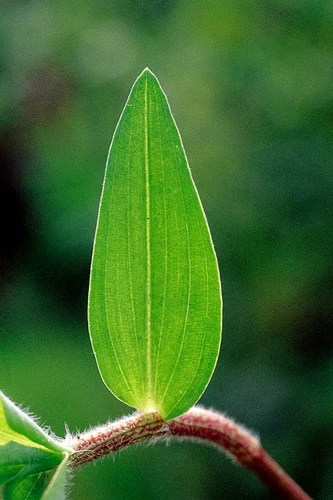 Fertile flowers are followed by small capsules which has three locules and 2 valves. These capsules measures 4 to 6.3 mm long and 3 to 4 mm wide, though it may be as narrow as 2.1 mm. Fruits are initially green turning to pale brown as they ripen and split open when fully mature (i.e. they are dehiscent).They consists of nearly five brown or blackish seeds that are 2 – 2.8, rarely up to 3.2 mm long, and 1.4 – 1.8 mm wide. They have pitted or furrowed surfaces and are deeply reticulated (i.e. net-like).

Climbing dayflower is very difficult to control manually as the stolons are cut into small pieces which easily regenerate. The weed should be removed from the field and then desiccated for more than 2 weeks. Most of the smallholder farmers in Asia and Africa use hand hoeing, hand pulling and use of animal-drawn cultivators.

Control using herbicides is variable depending on the herbicide, accuracy of leaf coverage and environmental conditions. As reviewed by Wilson, many standard herbicides have relatively low activity on species of Commelina: these include 2, 4-D, propanil, butachlor, trifluralin and pendimethalin. Herbicides with good activity on C. diffusa in rice include bentazone, molinate, oxyfluorfen and bifenox. Propanil alone gives poor control but combinations with the first three and others such as 2, 4-D, thiobencarb, oxadiazon and pendimethalin have given good results. In soybean, bentazone and metribuzin can both be effective. In plantation crops, paraquat is not always effective, but mixture with diuron is often advocated. Glyphosate is effective, but additives or mixtures may be needed for good results at moderate doses. Best results are always likely to be achieved when the weed is small. Prodiamine has been effective in ornamental fern beds.

There have not been any attempts to use biological control against Commelina spp. and the possibilities have not been explored. However, Waterhouse notes that although Commelina spp. are believed to be of Old World origin, it is curious that there are no records of agromyzid leaf miners, except from the Americas, and therefore tropical and subtropical areas of the Americas may be promising sources of candidate biological control agents.