Trending
You are at:Home»Herbs and Spices»Health benefits of Coleus Forskohlii 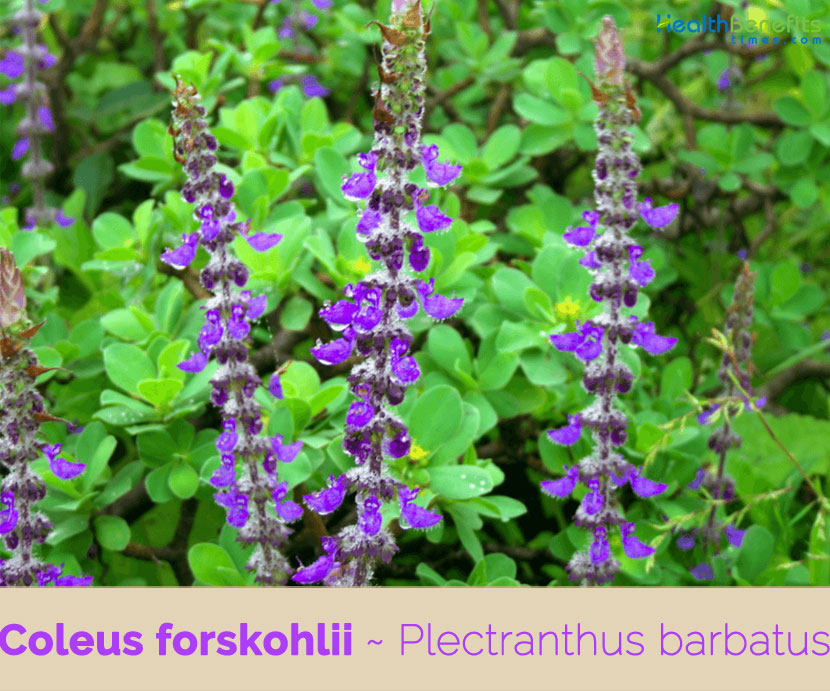 Plectranthus barbatus, also known by the synonym Coleus forskohlii is a tropical perennial plant related to the typical coleus species. It is composed of about 150 species under the Mint family of plants (Lamiaceae) and is closely related to spearmint, peppermint, basil, thyme, oregano and salvia. It produces forskolin, an extract useful for pharmaceutical preparations and research in cell biology. The plant is native to Pakistan, India, Nepal and Ceylon south through Arabia, Sudan, Eritrea, Ethiopia, Somalia, East African, South Tropical Africa and naturalized into southern Africa. It was popular as an ornamental plant in the 19th century and today is cultivated on a large scale in Gujarat, India, for use in pickles — approximately 980 tons (1,000 tons) are harvested yearly. Coleus, Flame Nettle, Painted Nettle, Painted Leaf, Poor Man’s Croton, Ahijado, Dafronaya, Malaina, Mayana, Indian Coleus, Kaffir Potatoe, Abyssinian Coleus, Marundhu Koorkan, False Boldo and Kikuyu Toilet Paper are some of the well-known names of the plant.

Genus name comes from the Greek words plectron meaning spur and anthos meaning flower in reference to the spur-shaped flowers of some members of the genus. Specific epithet means resembling the genus Scutellaria which comes from the Latin word scutella meaning a small dish or saucer in reference to the shape of the persistent calyx after the flowers fade. Coleus is used in Indian folk medicine rather than within the Ayurvedic tradition, and is a traditional digestive remedy. Research by an Indian/German company revealed that forskolin was a powerful medicine for various conditions, including heart failure, glaucoma, and bronchial asthma. Leaves have valuable medicinal properties and are also used in pickling.

Six other species of Coleus have been explored but only C. forskohlii consists of forskolin. Indian borage (C. amboinicus) is used traditionally within Ayurvedic and Unam Tibb herbal medicine to help reduce inflammation and is prescribed for bronchitis and asthma.

Leaves are ovate to oblong, blunt, rounded-toothed and short-stalked. They are arranged in opposite pairs perpendicular to each other, along a 1-3 ft. tall stem. They are 7.5 to 12.5 cm in length and 3 to 5 cm in width, usually pubescent, narrowed into petioles. The plant is strongly aromatic and the leaves have distinctive camphor like scent. Both root and leaves are harvested in autumn.

Inflorescence is raceme, 15 – 30 cm long.  Flowers are stout, up to 2 to 2.5 cm in size, tube bent abruptly downward, longer than the sepal cup. Flowers are 2-lipped, the upper lip is short, broadly ovate, turned back, 3-lobed, the lower much longer, boat-shaped, pointed. Sepal cup is hairy, bell-shaped, with lance shaped, prickly-tipped sepals. Bracts are broadly ovate, pointed, overlapping in bud, soon falling. The ovary is four parted and stigma is two lobed and the flower is cross-pollinated by wind or insects. Flowering normally takes place from August till October. 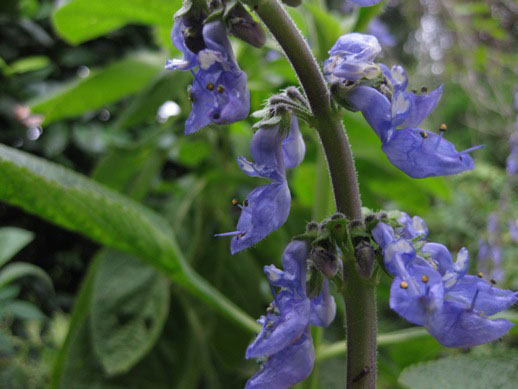 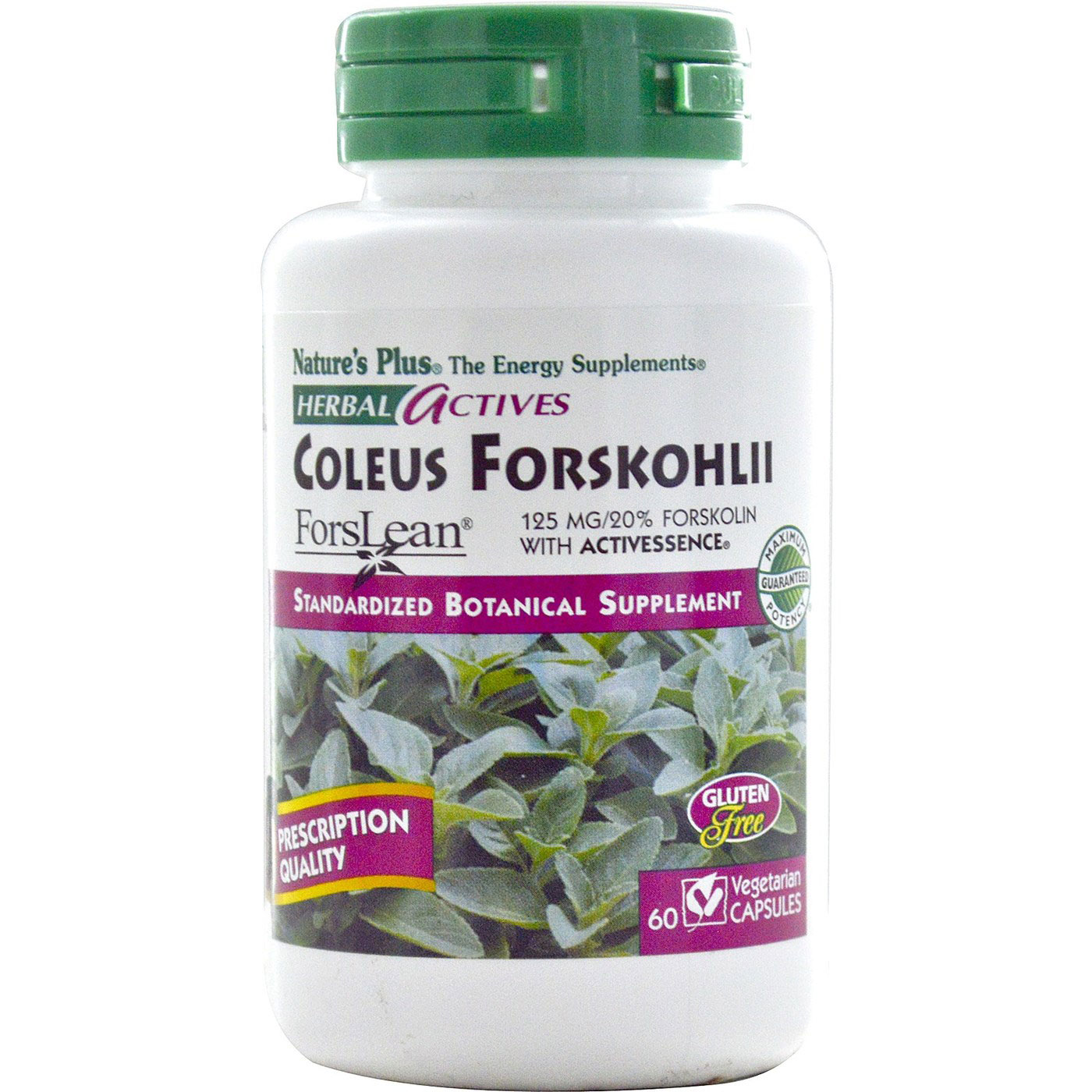 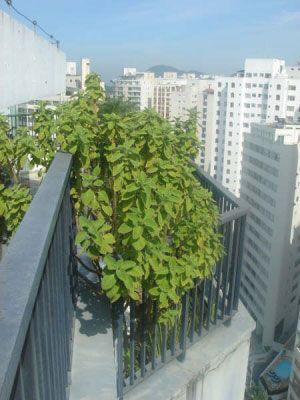 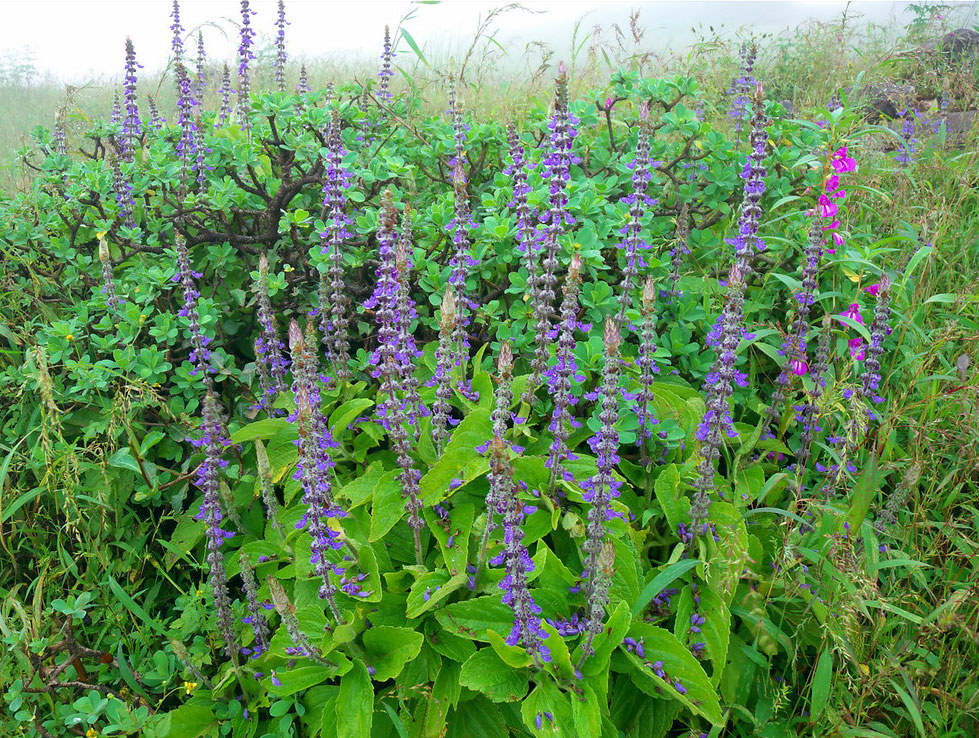 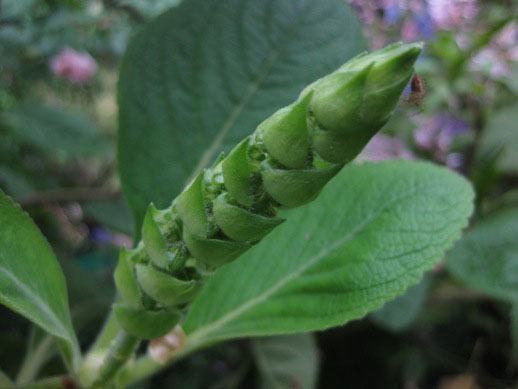 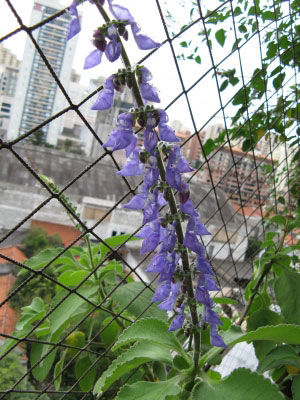 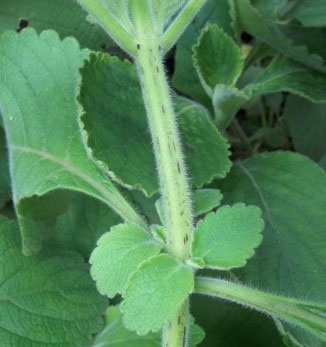 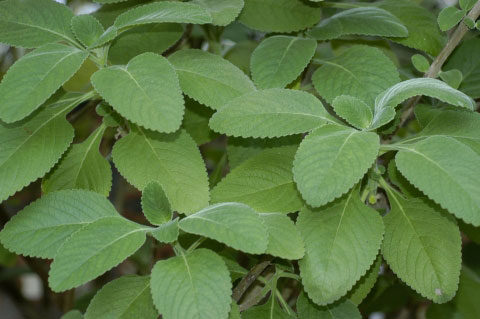 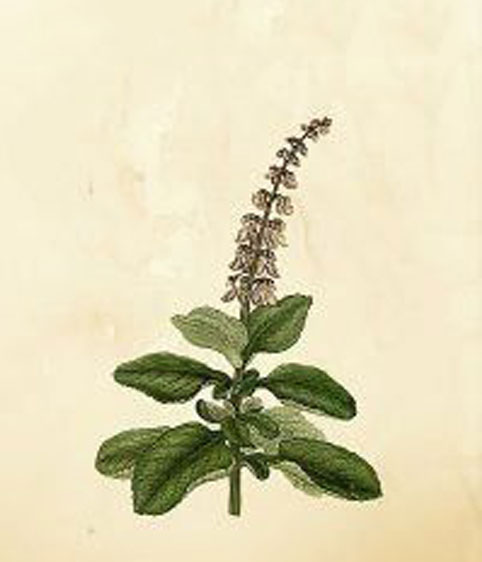 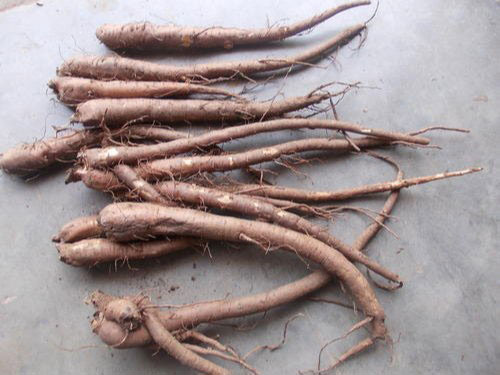 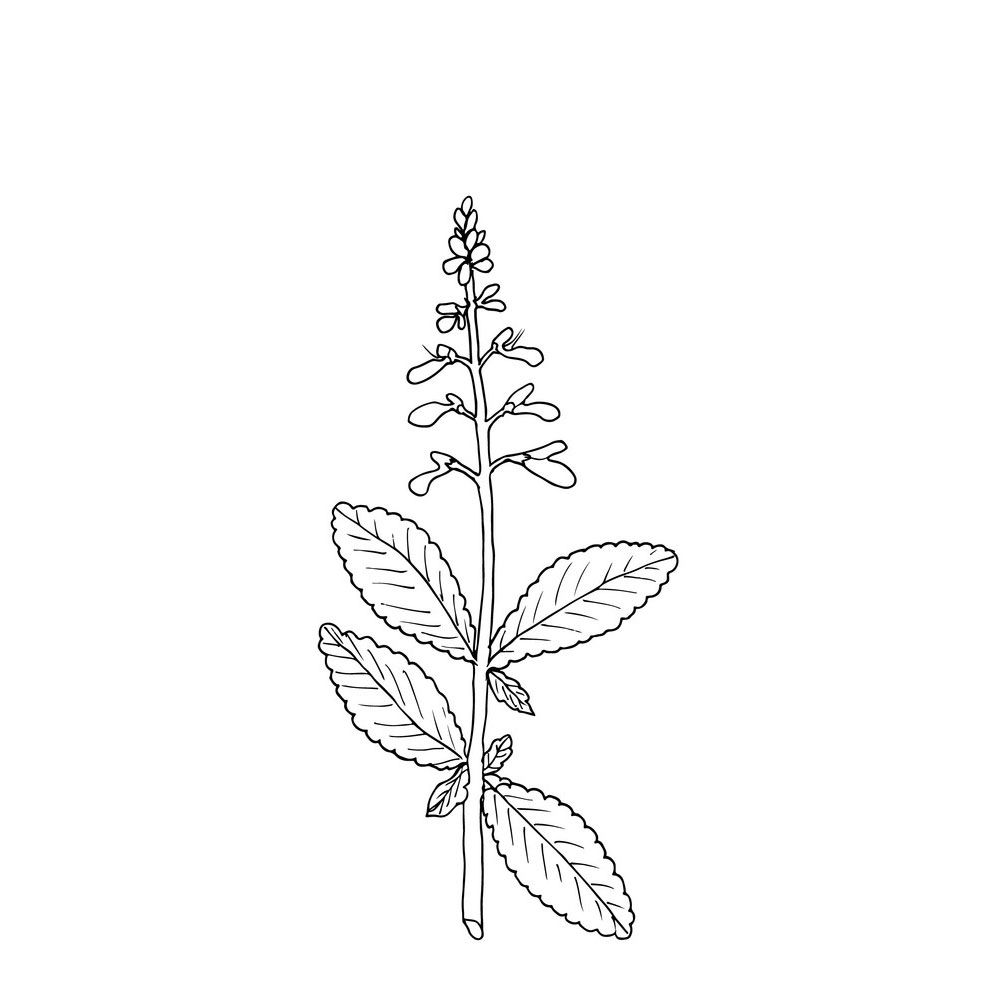 An important heart and circulatory tonic, coleus is used to treat congestive heart failure and poor coronary blood flow. It also improves circulation of blood to the brain.

Its antispasmodic action makes coleus valuable for respiratory complaints, including asthma and bronchitis.

Glaucoma is characterized by elevated intraocular pressure (IOP). It is a condition in which the pressure in the eye is too high, due to an imbalance between the formation of aqueous humor in the eye and its absorption in or drainage out of the eye. Eventually, as the pressure builds up, the blood vessels nourishing the optic nerve are constricted, resulting in irreversible damage to the nerve and impaired vision culminating in blindness, if left untreated.  Several animal and human research have demonstrated the ability of forskolin to lower IOP, possibly via cAMP activation and a reduction in aqueous flow.

Recent research confirmed that coleus consists of a powerful compound called forskolin that may have muscle relaxant properties and can dilate blood vessels thus has a capability to lower blood pressure (anti-hypertensive property). With dilated blood vessels the heart works less to pump blood throughout the body. Coleus can provide health benefit for patients suffering from cardiomyopathy.

Forskolin found in coleus has been found to regulate various enzymes and hormones in human body. It may be used to control and cure thyroid gland malfunctioning, particularly when the gland is under functioning (hypothyroidism).

Active chemical found in Coleus herb is forskolin has been found to promote weight loss in patients who are considered obese. Research has shown that forskolin in coleus can boost the production of enzyme called adenylate cyclase and as a result likewise boost another enzyme called cAMP. This dropping reaction of enzymes forces the fat cells to burn and release their stored energy.

By stabilizing body cells responsible for the release of histamines, which trigger allergies, and relaxing smooth tissues of the muscle, Coleus Forskohlii is important in the treatment of allergic respiratory conditions such as asthma.

Coleus Forskohlii is among the various nutritional supplements recommended for boosting the male hormone testosterone, responsible for sexual vigor. Additionally, by strengthening the heartbeat while lowering blood pressure, sexual performance has been shown to improve using extracts from the herb.

Psoriasis is a skin condition characterized by dry, rough, dead skin on the scalp, knees, groin or lower back. The exact cause is not exactly known but scientists suspect a weak immune system could be among the causes. Because of its ability to boost the body’s immune system, Coleus Forskohlii is among the various remedies prescribed for the skin condition.

It is closely related to providing relief against IBS, Coleus Forskohlii aids in the digestive process by boosting the production of stomach acids thus aiding in digestion thus improving our metabolism.