Trending
You are at:Home»Herbs and Spices»Health benefits of Common Madder 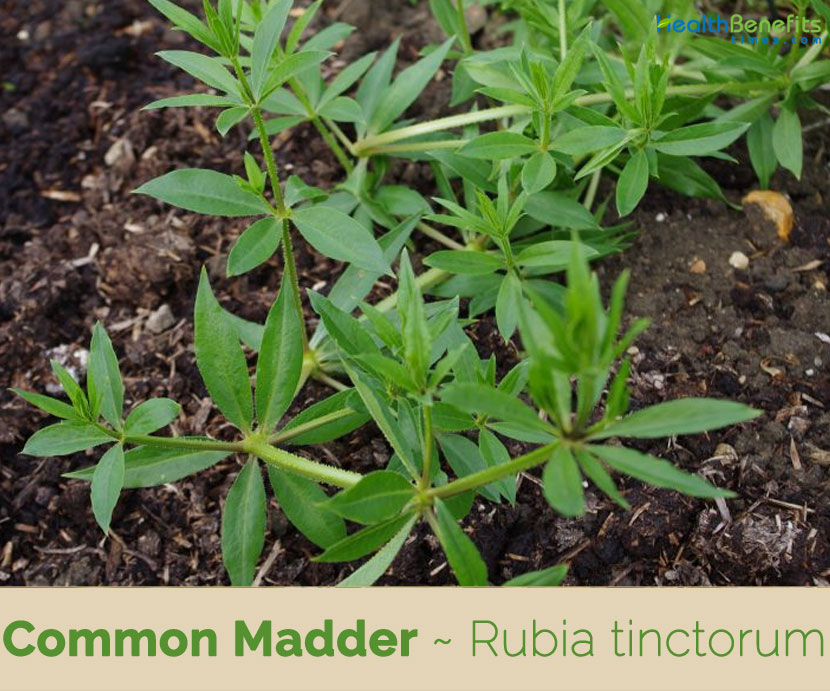 Rubia tinctorum, the common madder or dyer’s madder, is an herbaceous perennial plant species belonging to the bedstraw and coffee family Rubiaceae.  The plant is native to Southeastern Europe, Western Asia, and North Africa, but was early on introduced to the Central and Northwestern Europe where it became naturalized. Some of the well-known names of the plants are Alizarin, Common madder, Dyer’s madder, European madder, madder and Indian Madder.  The name Rubia is from the Latin word ruber meaning red, referring to the red dye from the plant’s roots.

Madder makes a permanent red dye called Turkey red that has been used traditionally to color Turkish fezzes, soldiers’ uniforms, and hunting jackets.  Madder root is a natural source of red, pink, orange, apricot, lilac, purple, brown, and black shades of dye, ink, and paint. The plant was originally exported from Turkey for cultivation in the main textile centers of Northern Europe.  In 1868, alizarin, the main pigment in madder root, was synthesized from coal tar, thus reducing market demand for the natural material. Madder is still used as a red dye in textiles.

Common madder is a perennial climbing plant that grows up to 1.5 m tall. The plant is found growing in neglected ground, hedgerows and among rubble. The plant thrives in well-drained loamy soil in full sun or semi-shade. Root are quite elongated and may measure up to more than a meter in length and be about 12 mm thick. Stems are several in numbers, herbaceous, diffuse, brittle, branched, tetragonal, and very rough, with sharp hooks.

The leaves of this plant are evergreen and grow up to 5-10 cm long and 2 – 3 cm width. About four to seven leaves emerge in whorls on the main or central stem and each of them have a shape similar to the stars. Leaves and stems have tiny hooks with the help of which the plant adheres to erect structures and climbs upwards.

Flowers of madder are very small and measure about 3 – 5 mm in diameter. Each flower has five yellow hued petals and they bloom between June and August. Fertile flowers give rise to small berries whose color varies between red and black. Each berry is about 4 mm to 6 mm in diameter. 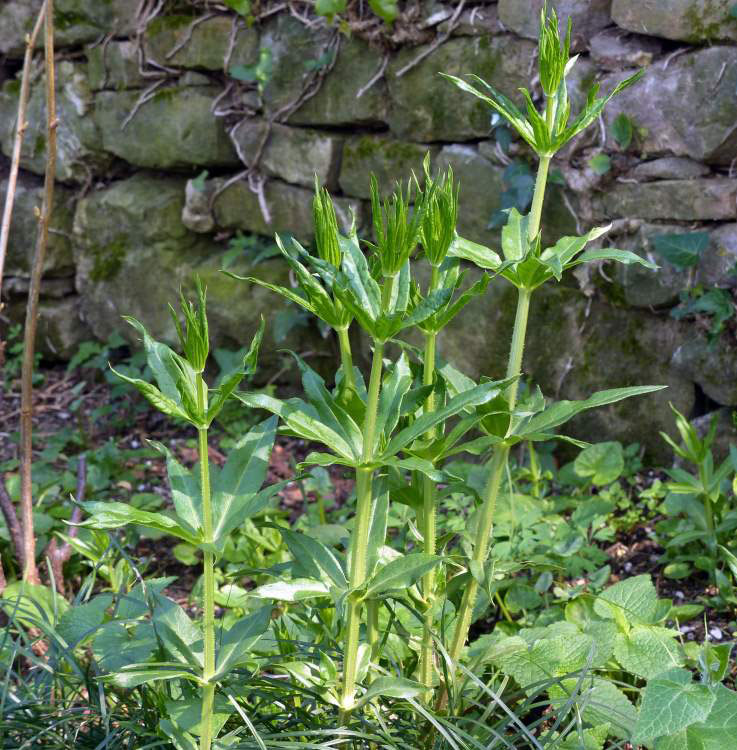 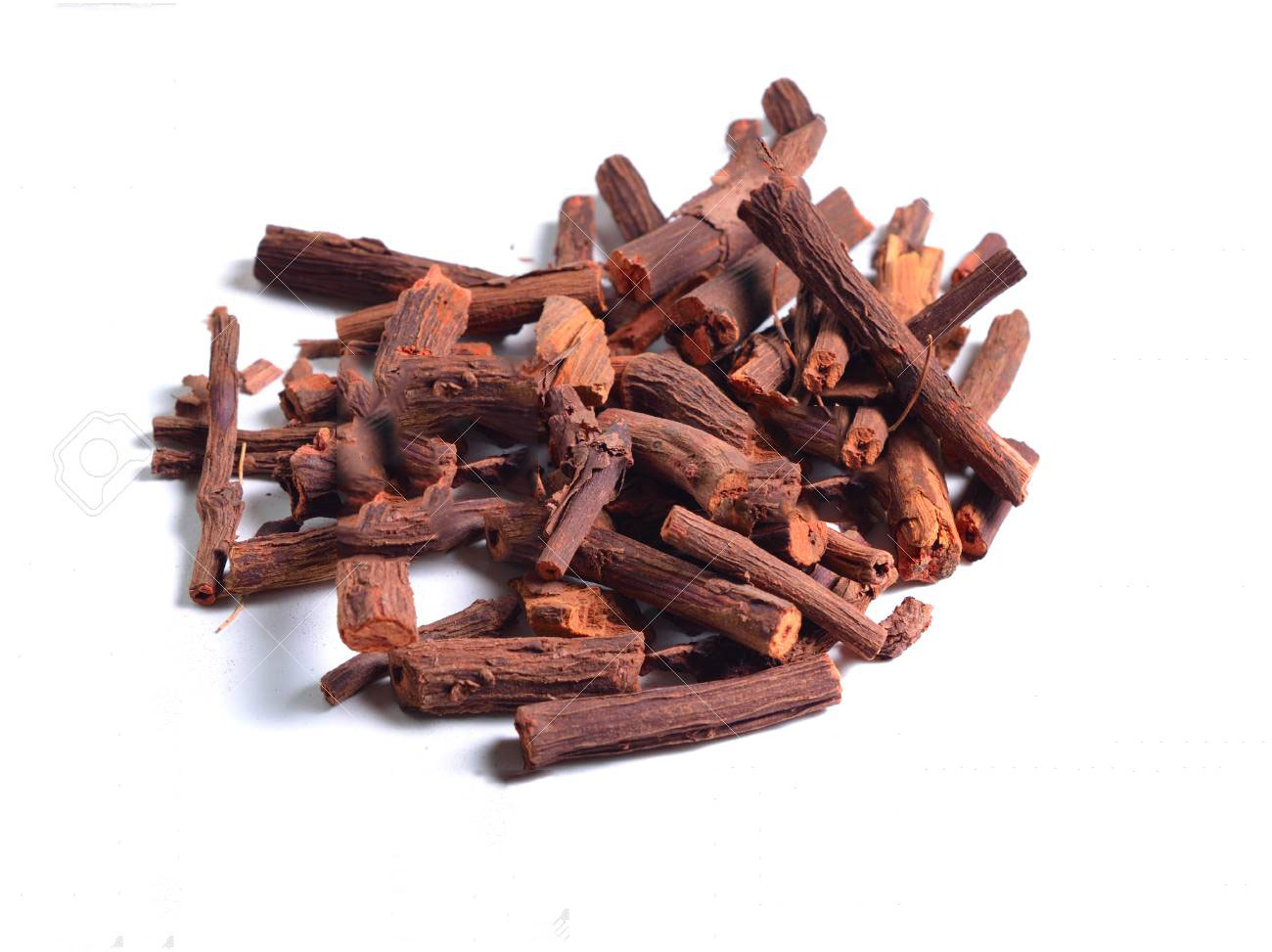 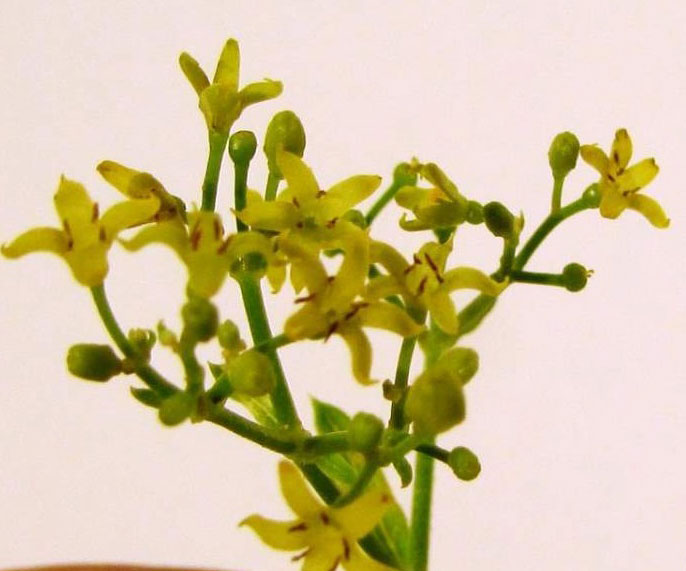 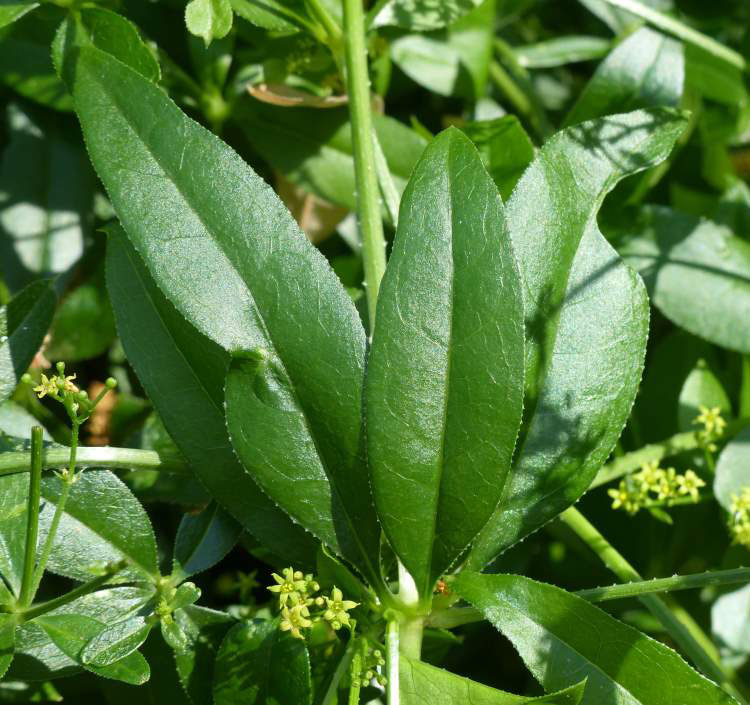 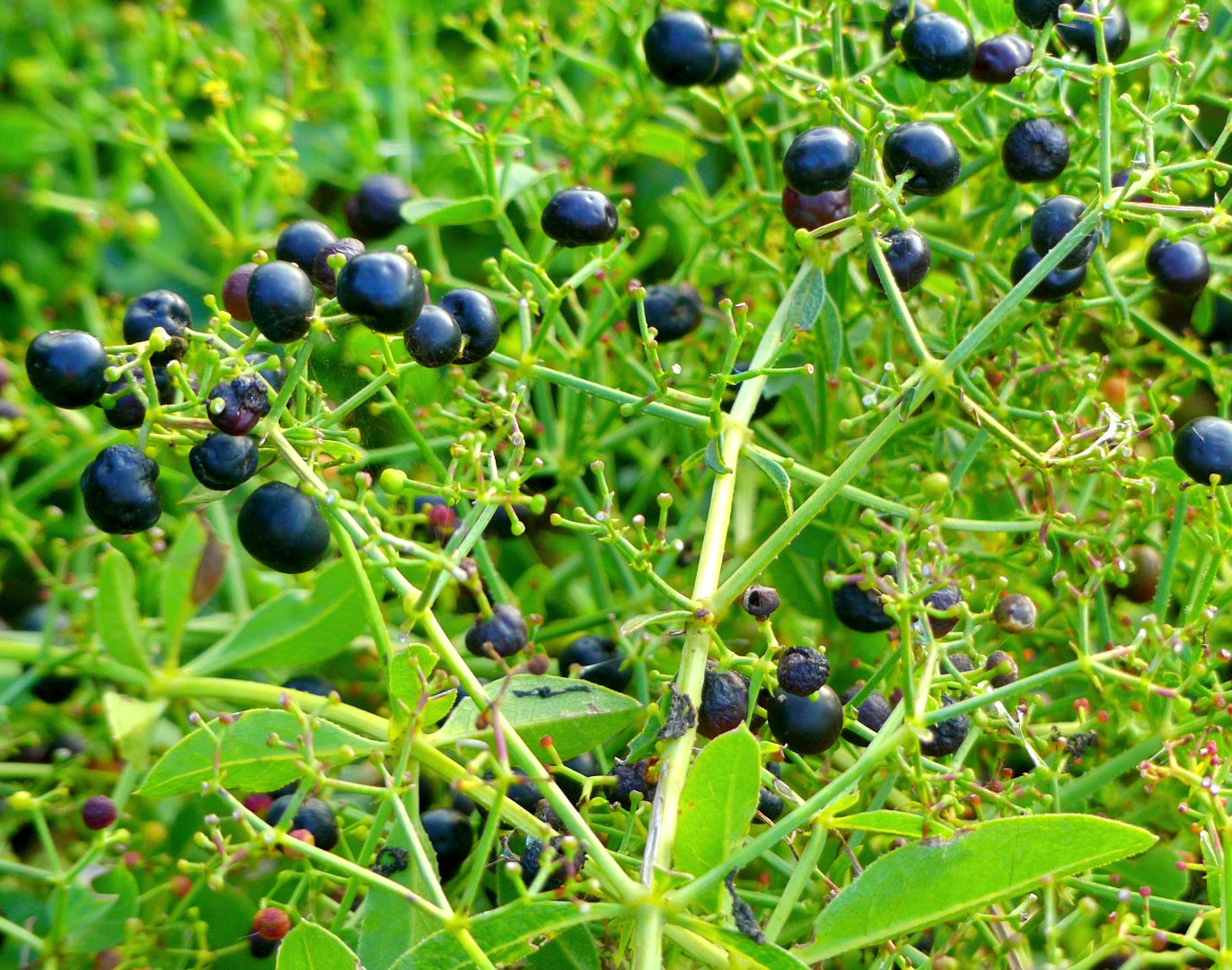 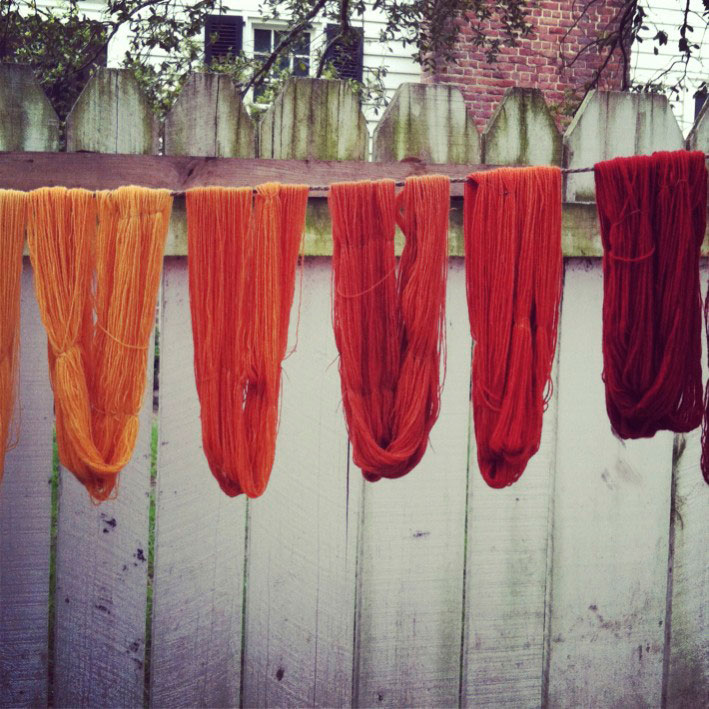 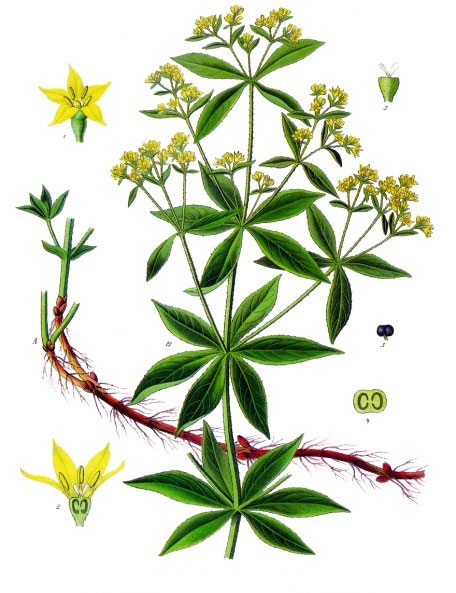 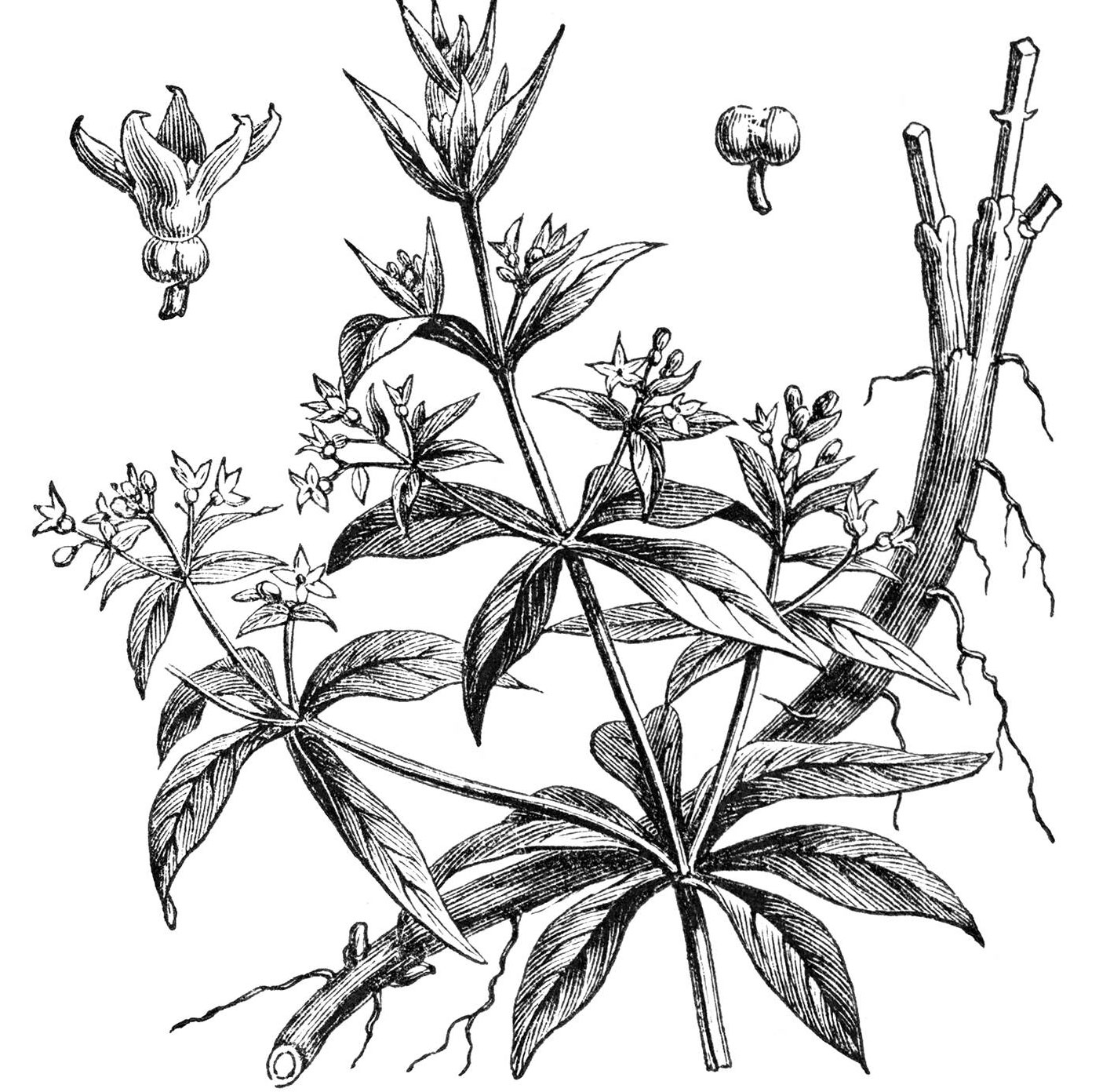 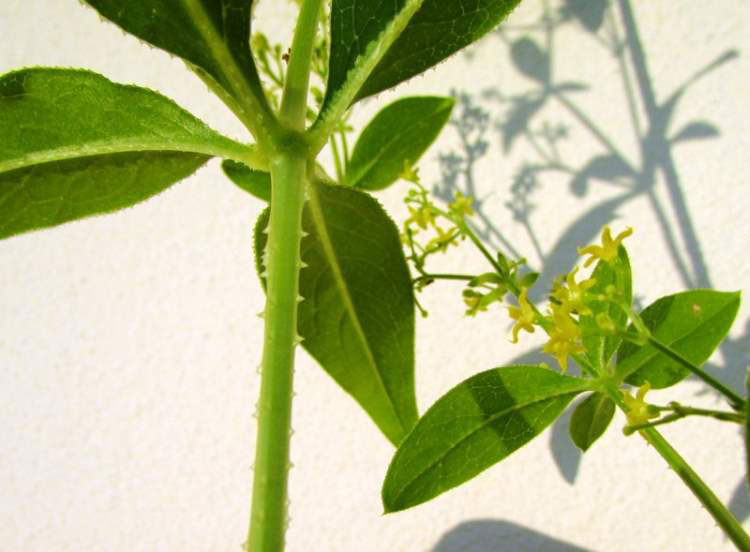 Let’s take a closer look at the many health benefits of madder root.

Madder root has the ability to treat jaundice. Jaundice means excess bilirubin in the blood and results in a discoloration of mucous membranes, the skin as well as the white parts of eyeballs into yellow.

The symptoms experienced by people with jaundice include dark urine, light-colored stools, mild rashes, yellow discoloration of the white part of eyeballs, skin, and mucous membranes. Jaundice can occur mostly due to liver-related diseases such as cirrhosis, hepatitis, thalassemia, and malaria.

Madder root helps to deal with urolithiasis also known as kidney stones. In fact, the herb is also effective for treating other forms of bladder diseases. Madder root consists of good amount of ruberythric acid, which helps to tone down magnesium and calcium as well as the formation of bladder stones in the long run. Additionally, madder root is an amazing antispasmodic agent that accelerates the easy passage of kidney stones through the urinary system.

Madder root is a powerful anti-inflammatory that is effective in the treatment of inflammatory conditions related with arthritis or other forms of joint pains. We all know how important it is for inflammation to be stopped because it usually indicates the early stage of most diseases. And so, if inflammation is not stopped early, then the chances of one falling really ill is very high.

Madder root has proven to be a good anti-inflammatory agent that helps with treating arthritis, joint pain, swelling, redness as well as pain in general. Like we said before, inflammation is the first sign of a disease and should be stopped before we become really sick.

An immunomodulator is a chemical agent that changes and adjusts the response or activity of the immune system. Immunomodulators like madder root are effective in preventing autoimmune diseases and inflammations.

Madder root helps to stop coughs as it is a natural expectorant that reacts very fast. An expectorant is a medicine that helps to encourage the release of sputum by the air passages. And just in case you didn’t know, sputum is actually a mixture of saliva and mucus formed in the respiratory tract, such as phlegm. This is why expectorants like madder root are very effective in the treatment of coughs.

8. Good for the Skin

Madder root is considered very effective for healing acne, skin rashes, boils, skin irritations, and other conditions of the skin. It can be applied topically to the affected area when made into a paste.

To make the paste more effective, simply mix about 100 grams of madder root powder with around 50 grams each of sandalwood, turmeric, and orange peel. Apply the paste on the skin and allow it to get dry before washing it off.

According to researches, animals that are fed with madder root usually get healed faster of diarrhea. As you already know, diarrhea is a frequent need to empty the bowels, and the stool is typically loose and watery. While diarrhea may automatically heal after some days, it is still an uncomfortable experience for its sufferers. However, studies suggest that madder root can effectively heal diarrhea and quickly too.

Appropriate dose of madder root for a person depends on certain factors such as the user’s health, age, and several other conditions. Currently, there is not enough scientific information on the right range of doses for madder root. But remember that herbal products are not necessarily safe and dosages can be essential. Always check with your doctor before using madder root.