Trending
You are at:Home»Herbs and Spices»Facts about Common Toadflax – Linaria vulgaris 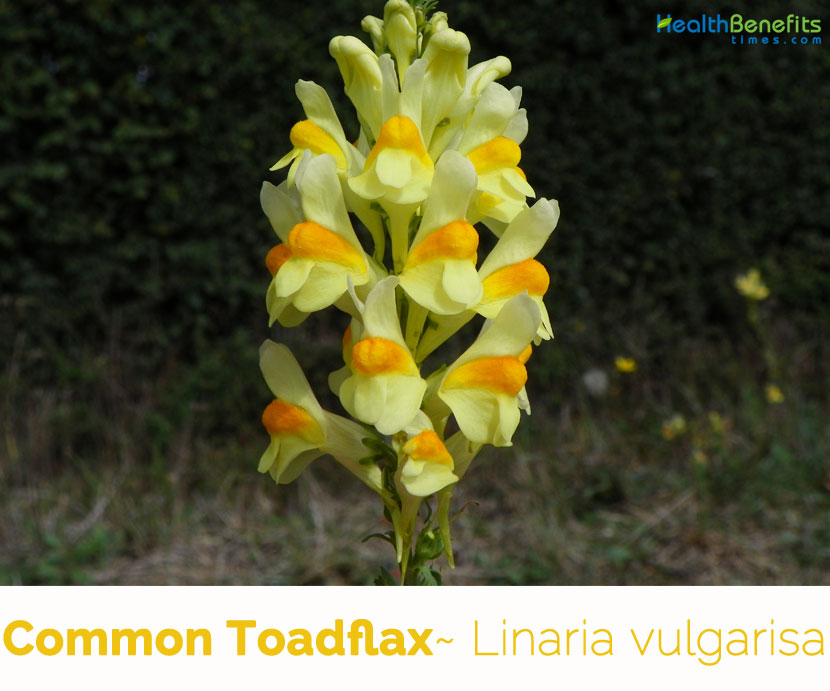 Common toadflax, is also known as yellow toadflax, the chilling ‘dead men’s bones’, and the descriptive, ‘butter and eggs’. The Latin name for this species of toadflax is Linaria vulgaris, with Linaria simply meaning toadflax, and vulgaris translating as common. It is a creeping perennial forb belonging to mustard family (Brassicaceae ⁄ Cruciferae). The plant is native to temperate areas of Europe and Asia; it has been widely introduced to North America, Australia, New Zealand and South Africa, and is considered as noxious in many of these countries. The name Toadflax is in reference to its similarity to flax and is derived from Tode Flax or wild flax. Carl Linnaeus derived the genus, Linaria, from Linum, the genus for Flax. The specific epithet, vulgaris means “common”.

Brideweed, bridewort, butter and eggs, butter haycocks, bread and butter, bunny haycocks, bunny mouths, calf’s snout, Continental weed, dead men’s bones, devil’s flax, devil’s flower, doggies, dragon bushes, eggs and bacon, eggs and butter, false flax and flaxweed are some of the well-known common names of the plant. The name Toadflax originated in the resemblance of the flower to little toads, there being also a resemblance between the mouth of the flower and the wide mouth of a toad. Coles says that the plant was called Toadflax, ‘because Toads will sometimes shelter themselves amongst the branches of it.’

Yellow toadflax was first introduced to North America by a Welsh Quaker as an ornamental plant. In addition to its beauty, it was also used for creating yellow dye, and as a lotion to help heal insect bites. This is a short-lived perennial that some people consider invasive while others welcome the beauty of this medicinal plant. Interestingly, when boiled in milk, the plant is said to yield an excellent fly poison; and an old country custom in parts of Sweden is to leave this milk infusion where flies are troublesome.

Yellow toadflax stems range from less than 1 ft. (31 cm) to nearly 3 ft. (0.9 m) tall, and are generally unbranched, or at most, sparsely branched. A single yellow toadflax plant can produce several woody stems. Mature plants may have 1 to 25 stems. The woody stems usually have a reddish color at the base, becoming more slender, succulent, and greener toward the growing tip. Stems are hairless

The plant has long, soft, thin leaves about 1 to 2 in (2.5 to 5 cm) long and 1/8 to 1/6 inch wide that are pointed at both ends with a narrow, tapering base; pale green with a silvery tinge. They are arranged alternately, but may grow so closely along the stem that they appear to be whorled or opposite. The leaf margins are entire, and the leaves are not hairy. Older leaves have a single vein visible on the underside. Leaves closely resemble those of leafy spurge, but yellow toadflax shoots do not contain a milky sap. 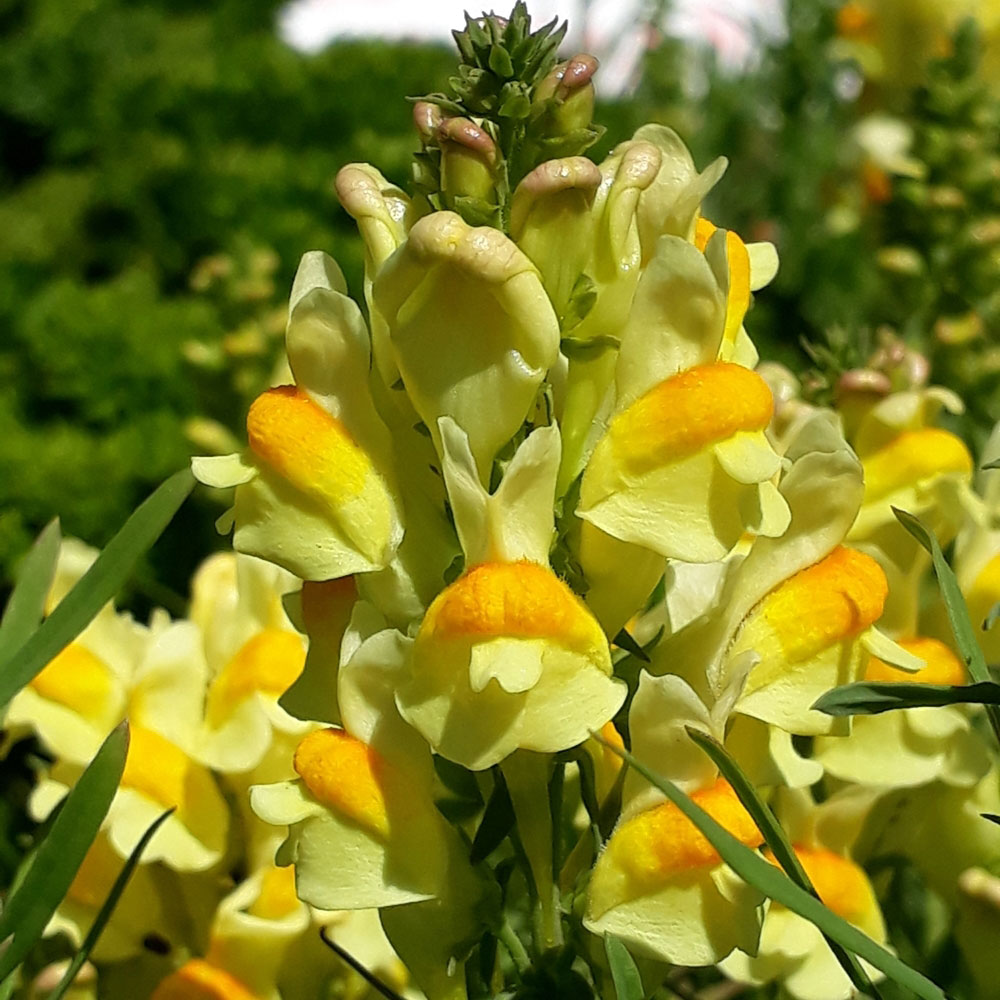 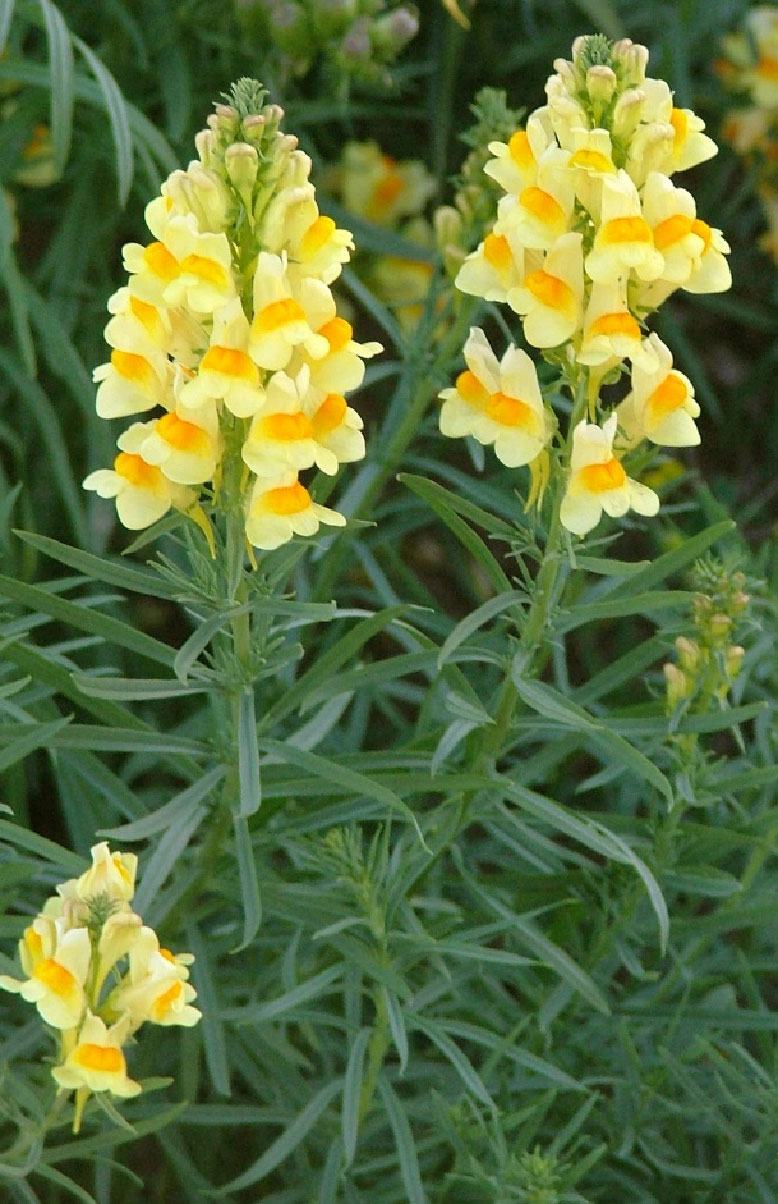 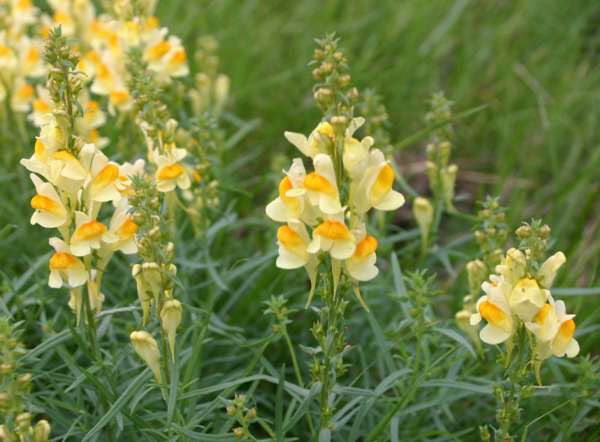 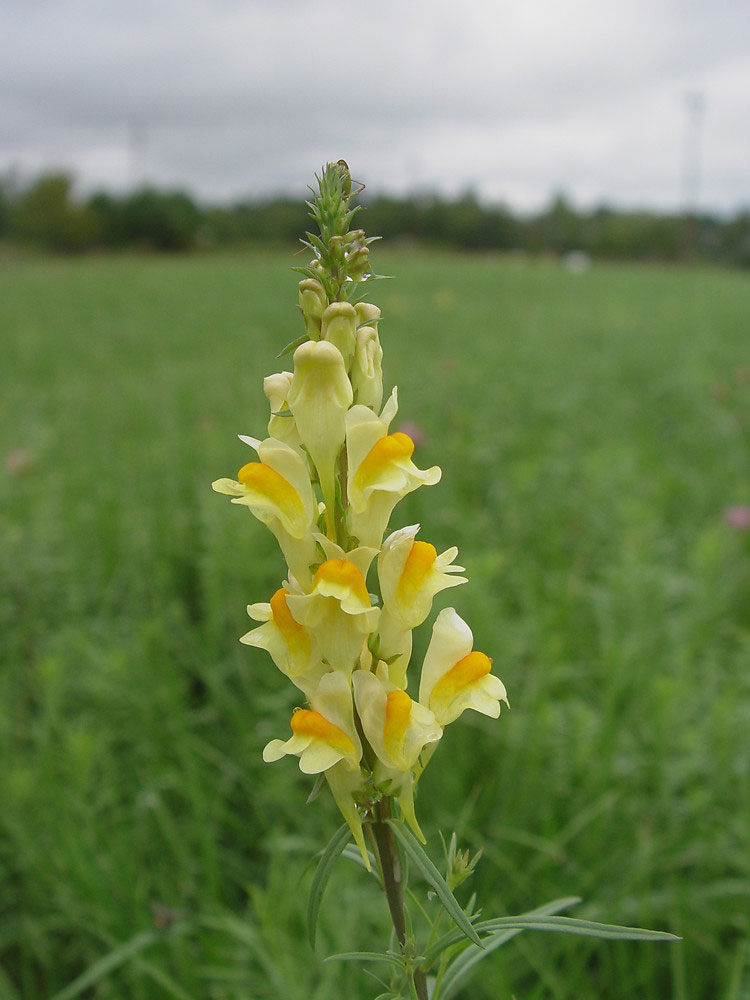 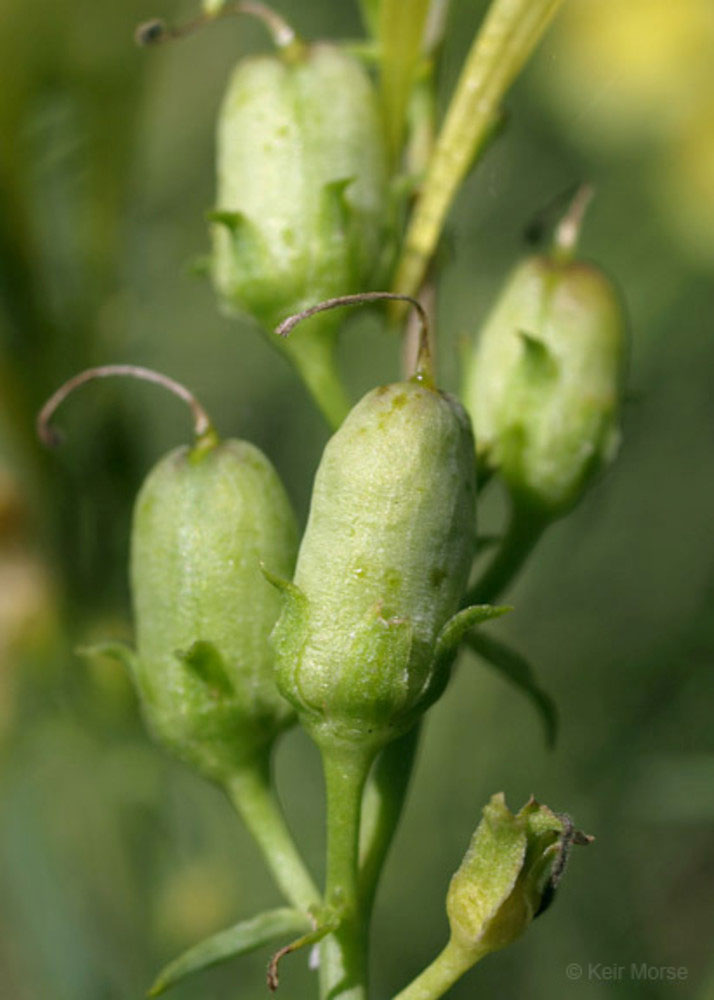 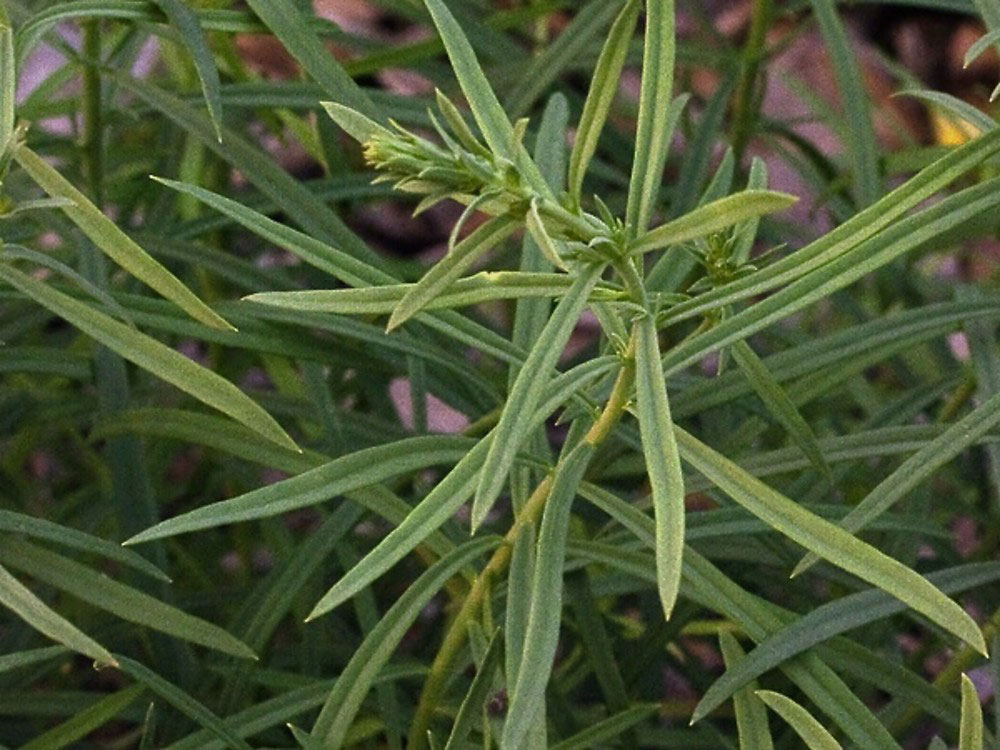 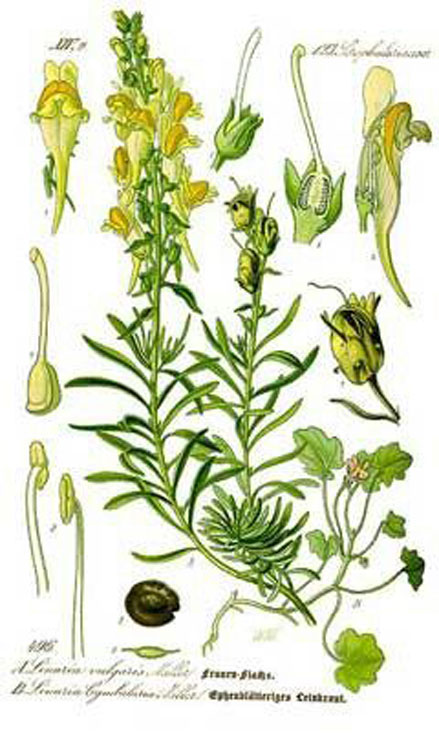 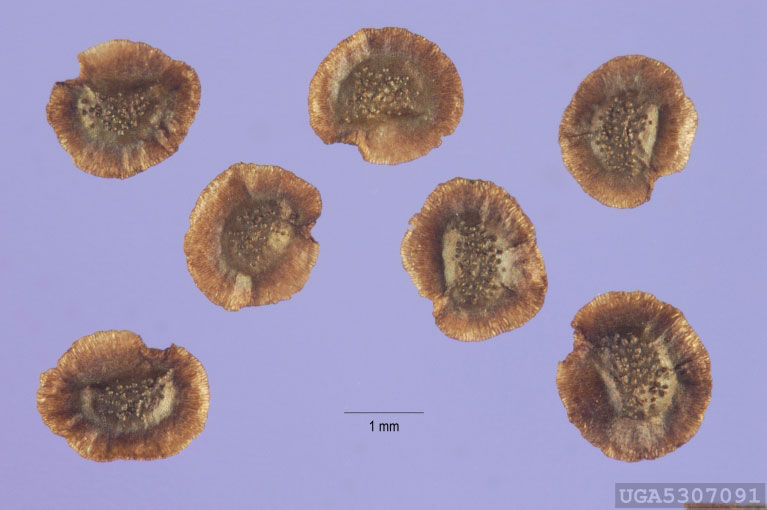 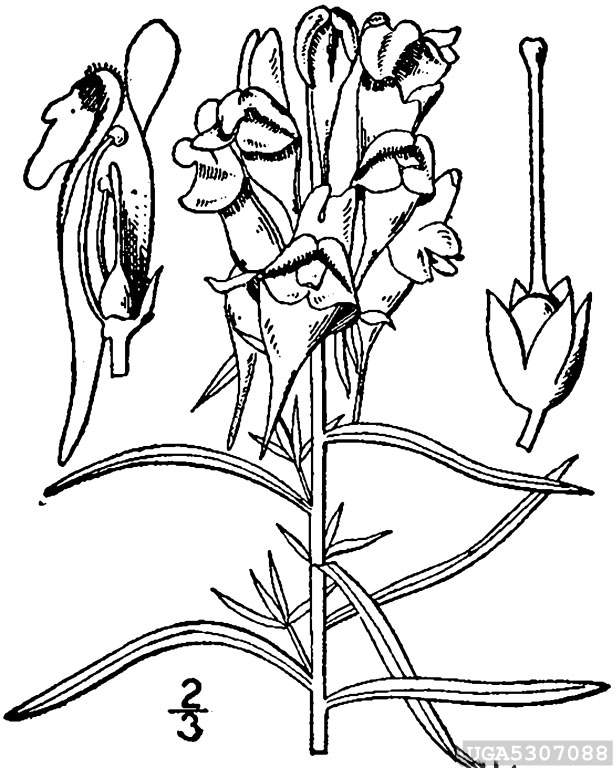 Common toadflax flowers are pale yellow, two-lipped, spurred, snapdragon-like blossoms that are 0.8 to 1.6 in (2 to 4 cm) long. The upper lip is double-lobed and the lower lip has three lobes. The long spur contains nectar. The bearded throat of yellow toadflax flowers is bright orange (hence the common name “butter-and-eggs”). Flowers appear as dense terminal elongated clusters at the top of the stem in groups of six to 30. The mouth of the flower is totally closed and never opens until a bee forces it open. They flower at different times depending on site conditions. Common toadflax blooms later in August and September. In high elevations they could flower as late as July. Droughty conditions may delay yellow toadflax flowering.

Toadflax is a native of Eurasia that was introduced into North America as a garden flower despite warnings of its weedy potential. Because it was regarded as a desirable wild flower, it was allowed to escape cultivation and spread. As a result, it is now naturalized throughout the U.S. and Canada. Toadflax is commonly found in eastern North America and along the Pacific Coast. It is distributed throughout Ohio. It can be found along roadsides, fence lines, waste places, pastures, rangeland, wood edges, and in cultivated fields. Reproduction is by seeds and creeping horizontal roots. The species is very adaptable and can be found growing in a wide range of conditions from sub-arctic to temperate, dry plateaus to damp rocks, mountain regions to grazed areas, and gravelly or sandy soils to fertile loams.

Prevention can be the easiest, cheapest, and most effective means of control. Stricter regulation of what agents, materials, or development can be brought or done into wilderness areas and public lands needs consideration. An example is the restriction of livestock in nature reserves should be considered. Monitoring is critical in knowing where invading populations occur and how abundant. It is easier to control small infestations before a population build-up. Education, awareness programs, advertising and community outreach are all excellent ways to stay informed at a local or regional level and allows earlier detection. Research is necessary in order to develop new methods and techniques of control and better understand the biology of the species.

Most physical methods of control for Linaria vulgaris alone are not satisfactory, and not recommended for medium to large stands. Mowing helps to prevent the plant from going to seed, but mowing also encourages vegetative reproduction from the lateral roots and rhizomes which can exasberate the problem further. Fire is also not effective because the underground rhizome system is not damaged and will just resprout shoots. Tilling on arable lands can be effective in eradicating L. vulgaris, but tilling needs to be done every 7-10 days over the course of the season and repeated yearly for several years in order to eradicate resprouting root fragments. Grazing by livestock is also not recommended as it stimulates vegetative growth with viable seeds passing through the digestive tract. Overgrazing can reduce competition and increase the disturbance to the site creating an ideal environment for toadflax establishment. The plant is not preferred by grazing livestock and contains poisonous glucosides that are moderately toxic to livestock.

Some cultural options for control of L. vulgaris is proper timing of seeding agricultural crops, over-seeding, fertilizing, using high quality seed, planting at high densities, and using species that are adapted to your region. Revegetating with native species in particular perennial grasses which are more competitive to perennial forbs is another option.

Chemicals that have shown to be effective in controlling L. vulgaris are glyphosates, a nonselective herbicide, and Telar and Tordon, two selective herbicides, among many others. Repeated applications may be required periodically every few years for up to twelve years. Applications should be timed around flowering when the plants are most vulnerable or after a hard frost. Integrated management by seeding competitive species shortly after a chemical application has shown to be effective in preventing reemergence (Beck, 2006). Always follow labeled instructions for any chemical and make sure that any chemical being applied is not going to kill or reduce the competitive ability of any native species.