Trending
You are at:Home»Fruits»Traditional uses and benefits of Coral berry 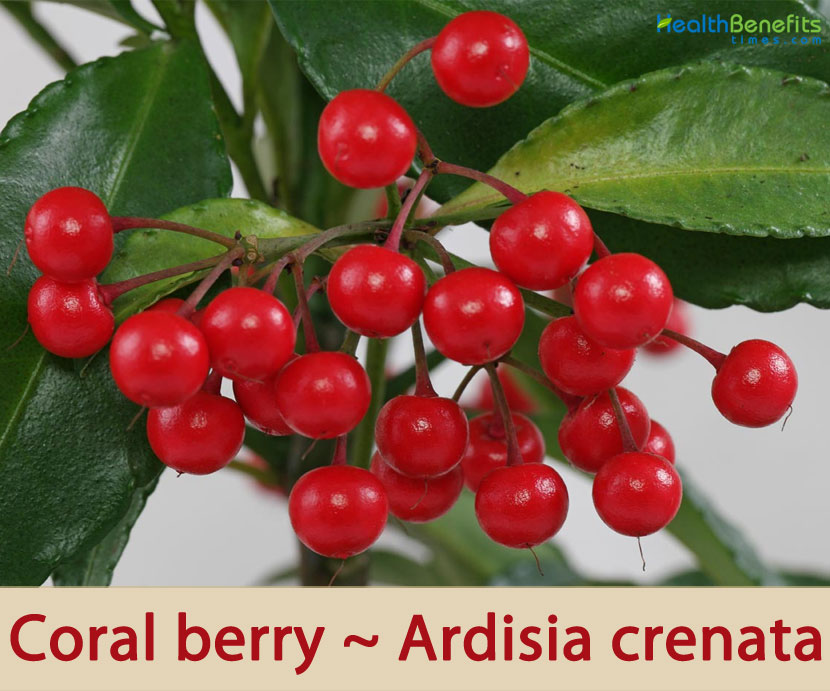 The genus name Ardisia comes from the Greek word aradis meaning a point in reference to the pointed anthers of these flowering trees and shrubs. Specific epithet crenata is the feminine form of the Latin word crenatus, which means with blunt teeth. This most likely refers to the plant’s crenulate or notched leaf margins. The plant is harvested from the wild for local use as a food and a medicine. It is often grown as an ornamental, valued especially for its dark foliage and red berries. It can also be grown as a hedge. Preparations made from the root of Ardisia crenata are used as an ingredient in traditional Chinese medicine.

The stems are usually only branched in the upper part of the plant. The younger branches are rounded about 3-4 mm thick and green in color. Stems and leaves are generally hairless (i.e. glabrous) throughout. Twigs are flexible, slender, and brown. The young twigs have curved white hairs, becoming smooth with age. Bark is brown, peeling into small, short flakes that are easily rubbed off or shredded into long, thin strips. The wood is soft, nearly white, with small pith.

The simple leaves are 5-20 cm long and 1-4 cm wide and are alternately arranged and dark green in color. They are relatively thick and leathery in nature and narrowly oval or elongated in shape (i.e. elliptic-lanceolate or oblanceolate. These leaves are glossy and dark green above with paler and duller undersides and have slightly toothed (i.e. crenulate) or finely wavy (i.e. undulate) margins. They are borne on short stalks (i.e. petioles) about 3-10 mm long and have pointed tips (i.e. acute to acuminate apices). Each leaf has a central vein with 12-18 pairs of side veins (i.e. lateral nerves), which are slightly raised on the lower surface and merge into a distinct vein along the leaf margin (i.e. a marginal nerve).

The flowers are small, white to reddish-pink in color, and fragrant. They are borne in clusters on flowering branches 4-16 cm long. These flowering branches usually divide into several smaller branches (i.e. rays) 2-4 cm long, each of which bear numerous flowers on stalks (i.e. pedicels) 5-10 mm long, which elongate further when in fruit. The flowers are 4-6 mm across and usually have five small sepals (1-2.5 mm long) with rounded tips (i.e. obtuse apices), five petals, and five stamens. The five white, or occasionally pinkish, petals are about 4 mm long and are slightly joined together at the base and have pointed tips (i.e. acute apices). Under close inspection, numerous tiny black spots can be seen on the flowers when they are young (i.e. they are black punctate). Flowering normally starts from April to October. 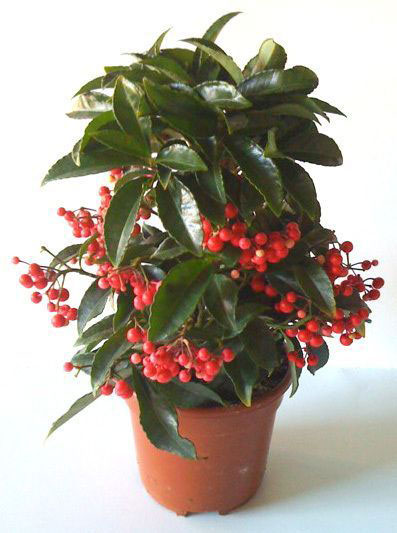 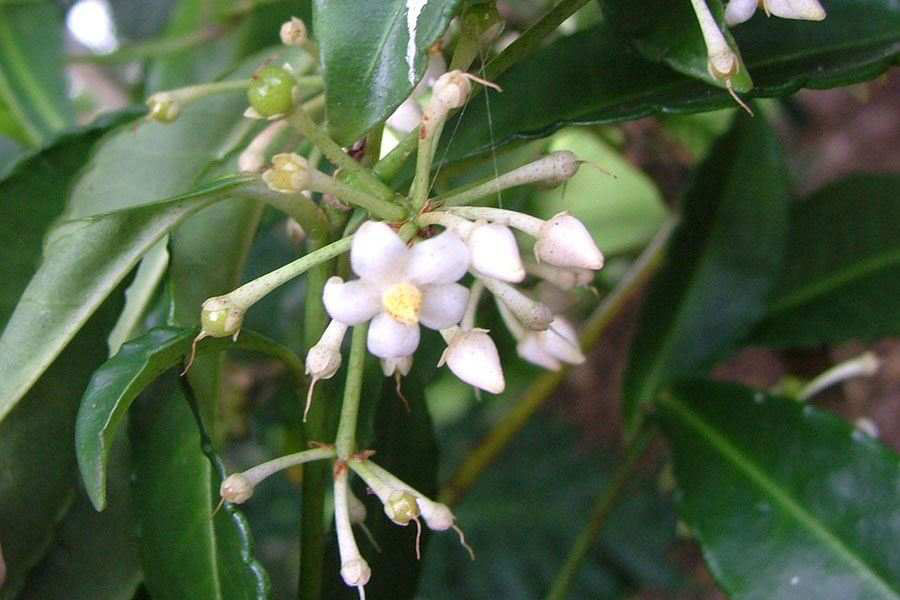 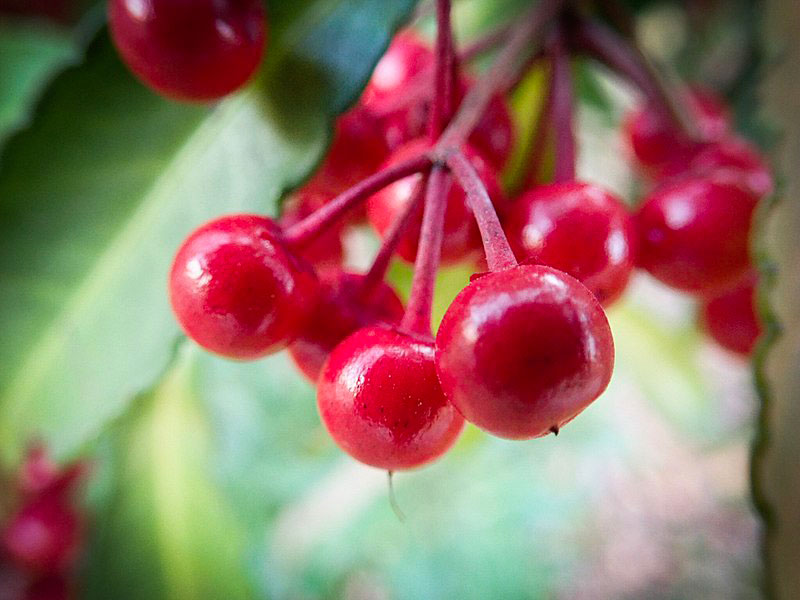 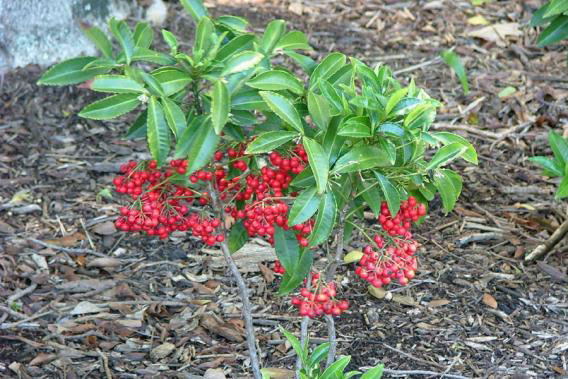 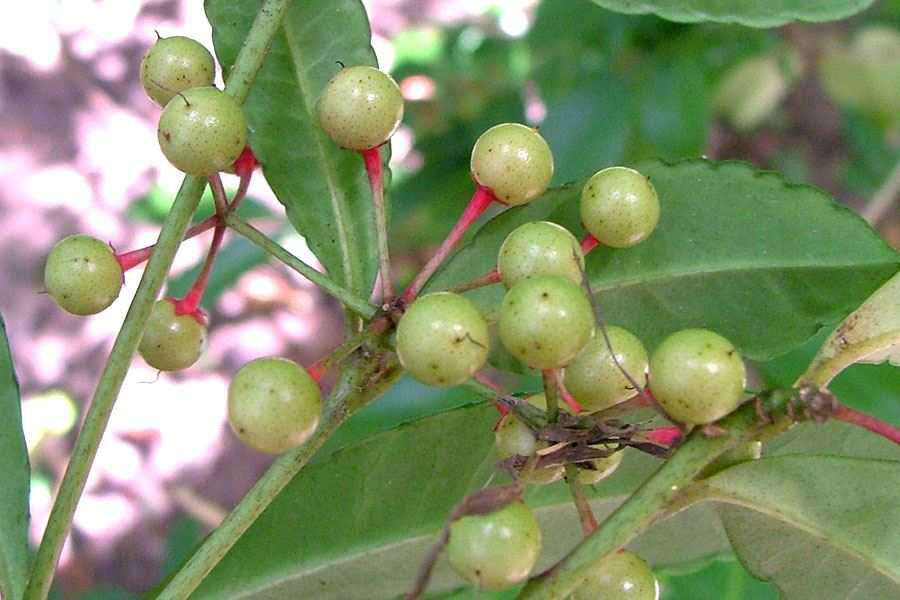 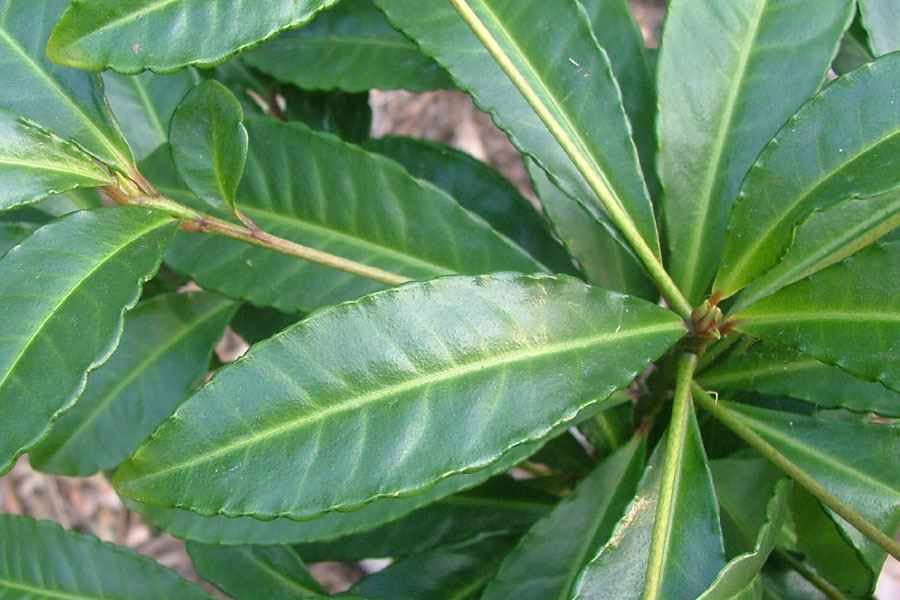 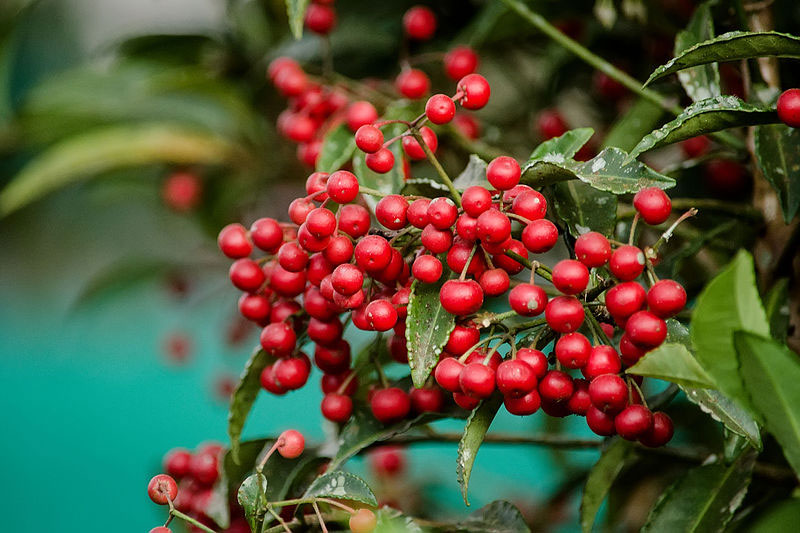 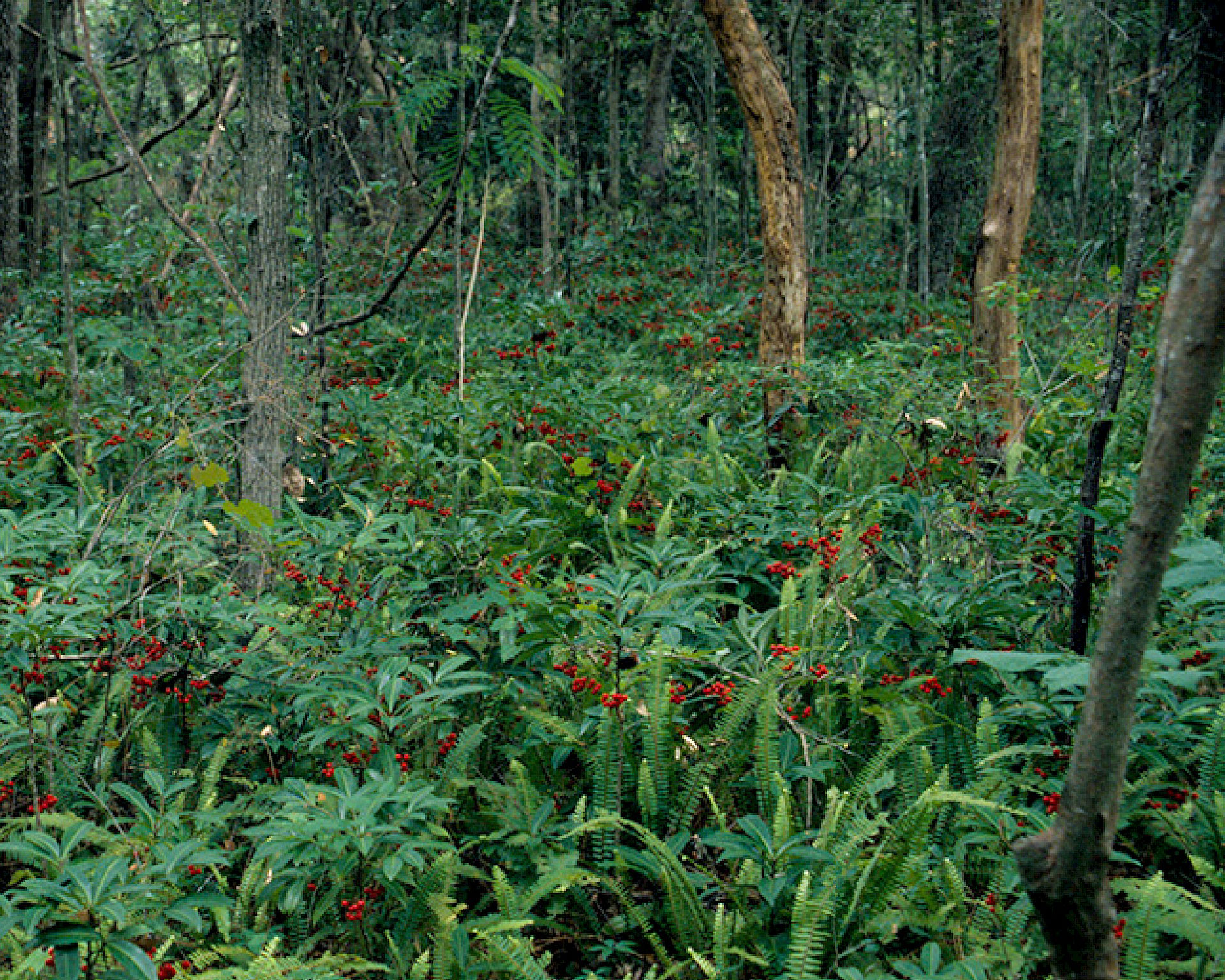 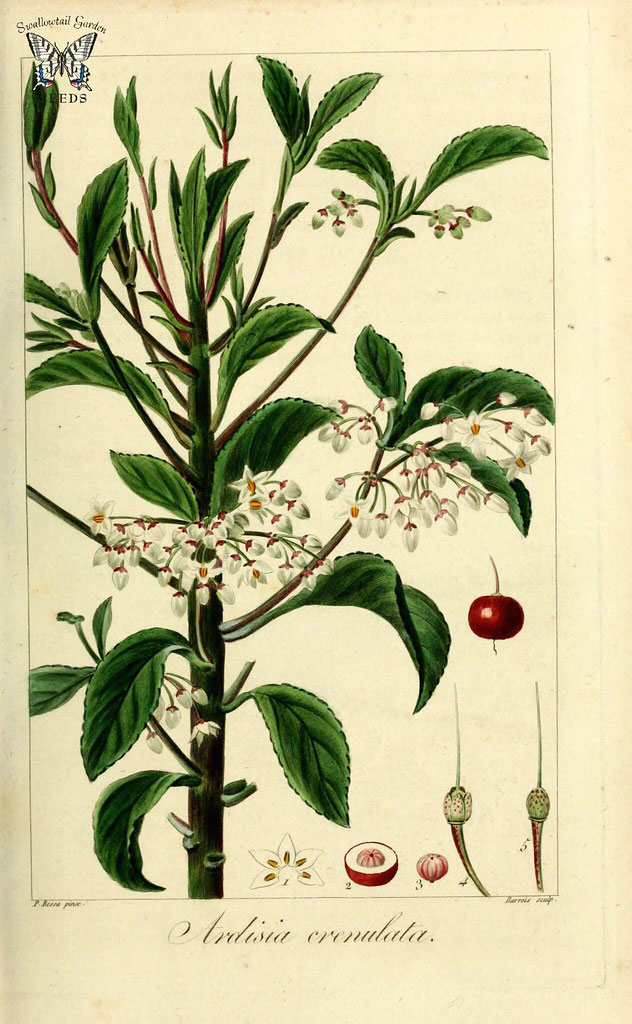 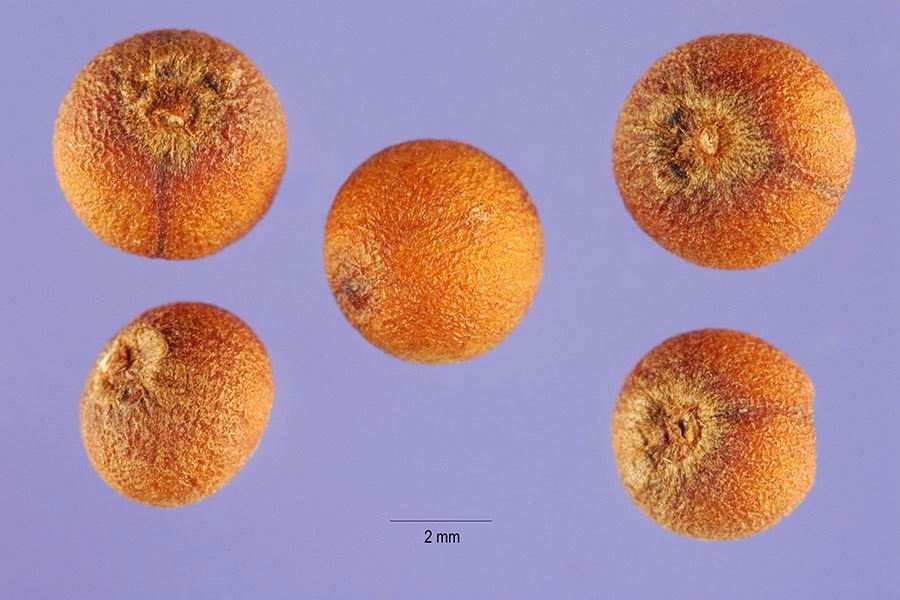 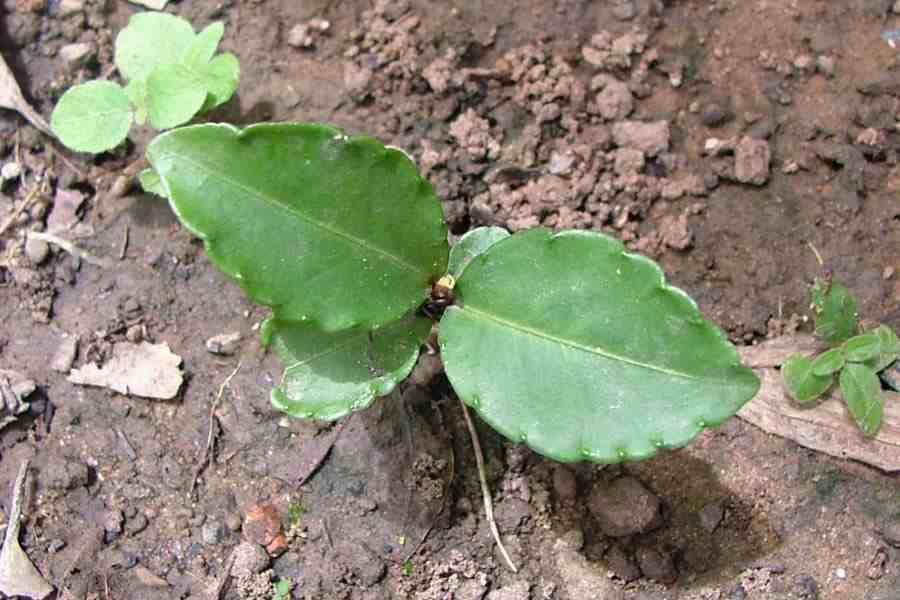 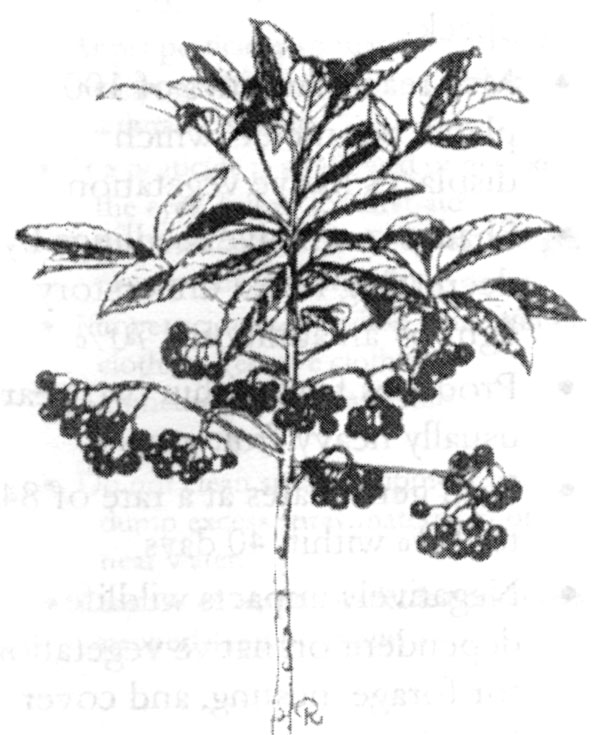 Fertile flowers are followed by showy bright to dark red berries actually drupes that can remain on the plant for several months. These fruit are initially green in color but turn various shades of red as they mature. Populations with white berries also exist. They are rounded (i.e. globose) in shape, glossy in appearance, and 5-8 mm across. Seeds are hard, egg-shaped, flattened on one side, white, and smooth. They are normally one seeded and seeds are able to germinate under a dense canopy and are dispersed by birds and humans. Berries are dispersed by birds and, when present, raccoons through consumption and subsequent excretion and also by water flow.

Limit planting and remove existing plants within the landscape. If possible, removal should occur before the plant produces seeds. As fruits containing seeds remain on plants for several months, care should be taken not to spread fruits and seeds during the removal process.

Humans are the primary mechanism for long-distance dispersal of A. crenata; therefore constraining transmission by human endeavor is the best way to restrict introduction and establishment of populations.

Cultural management is difficult once the plant has become established, but good ground cover would limit seedling establishment.

For small or isolated infestations, hand-pulling of plants is effective for seedling control. Larger plants can be cut or burned, but re-growth from roots and root crowns needs monitoring for at least a year. Roots are unable to re-sprout if they are severed from the root crown; therefore root crown removal is essential to prevent re-growth after mechanical control.

There are no known biological control agents for Ardisia crenata. However, because invading populations are thought to have originated in China, potential sources of biological control might be found there, within its native range.

Herbicides are effective, but the waxy leaves may prevent some uptake; care should be taken to avoid targeting desirable plants with herbicide applications. One herbicide trial found that application to mature plants suppressed plant cover for 12 months, with highly variable seedling cover within the same period; monitoring and re-treatment at 12 months was recommended for further suppression, especially for emerging seedlings.