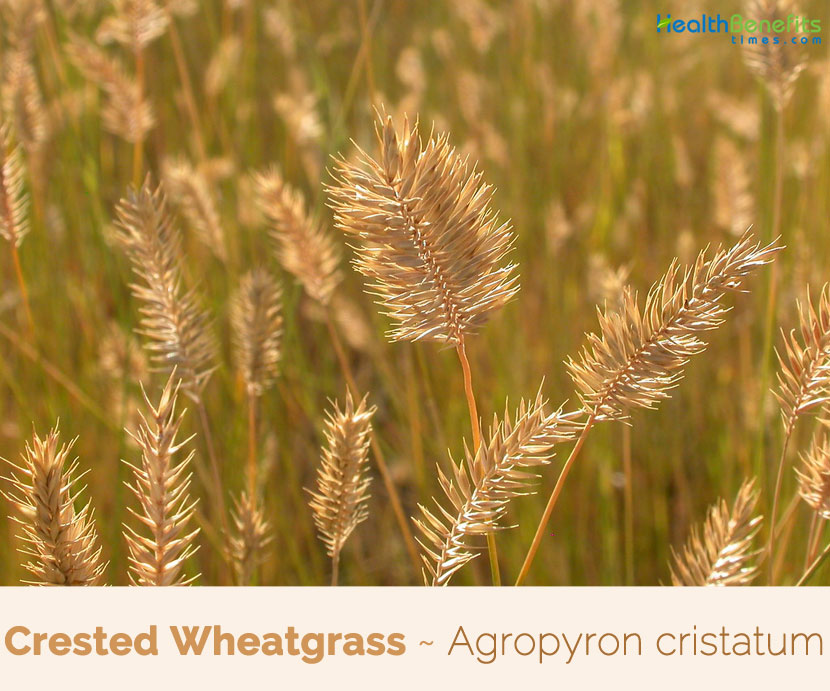 Crested wheatgrass is a long-lived, cool season, drought tolerant, introduced, and winter hardy densely tufted grass that grows about 30–50 cm high at maturity. The plant is found growing in carbonate slopes in the forest steppe belt, on dry and inundated terraces, and in steppe woodlands. It prefers well-drained, deep, loamy soils of fine, medium or moderately coarse texture, from sandy loams to clay loams. It does not grow well in loose sandy soils or heavy clays, preferring moderately alkaline conditions with low to medium fertility. Although it does not grow well on saline soils, it can tolerate salinity. It is extremely drought tolerant and does not tolerate prolonged flooding.

Leaves are alternate, 2 to 5 inches long, 1.5 to 6 mm (to ¼ inch) wide, stiff, and flat or rolled in along the edges (involute), hairless to variously hairy. Sheaths are mostly hairless. The ligule (membrane where the leaf joins the sheath) is about 1 mm long and not fringed with hairs. Nodes are smooth. Stems are hairless, erect or sometimes spreading from the base and rising at a lower node (genticulate). Plants are clump-forming but can form dense stands.

Spike-like cluster at the top of the stem, 1 to 4 inches long, the spikelets (flower clusters) ascending to spreading, alternately arranged on opposite sides of the stalk (2-ranked) and mostly evenly spaced like the teeth of a comb, though the upper spikelets may be more crowded and occasionally spikelets are more irregularly arranged. Spikelets are stalk less or nearly so, light green at flowering time, 7 to 16 mm (to ~2/3 inch) long, flattened, lance-elliptic in outline and have 3 to 6 florets; the floret at the tip may be sterile. The spike stalk (rachis) is often covered in long, apprised hairs.

Seed heads are flattened vertically, with compact overlapping spikelets. Grains (seeds) are oblong and hairy at the tip. Seeds produced may remain practical in the soil for up to five years. Crested wheatgrass is also able to spread vegetatively through the production of tillers. The plant may regrow in the fall if moisture is sufficient. 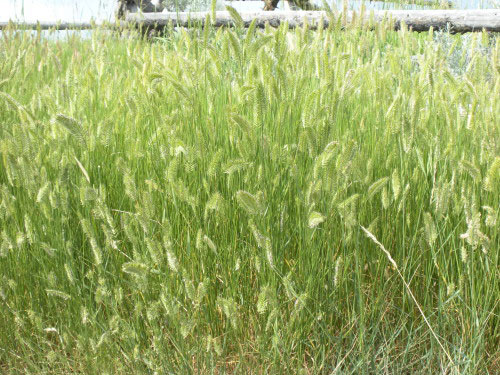 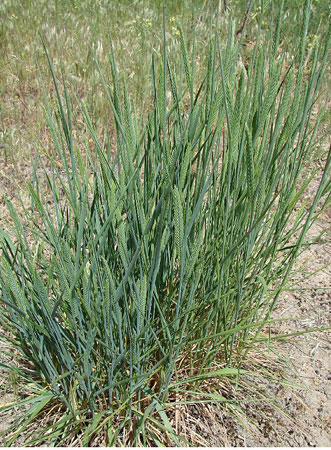 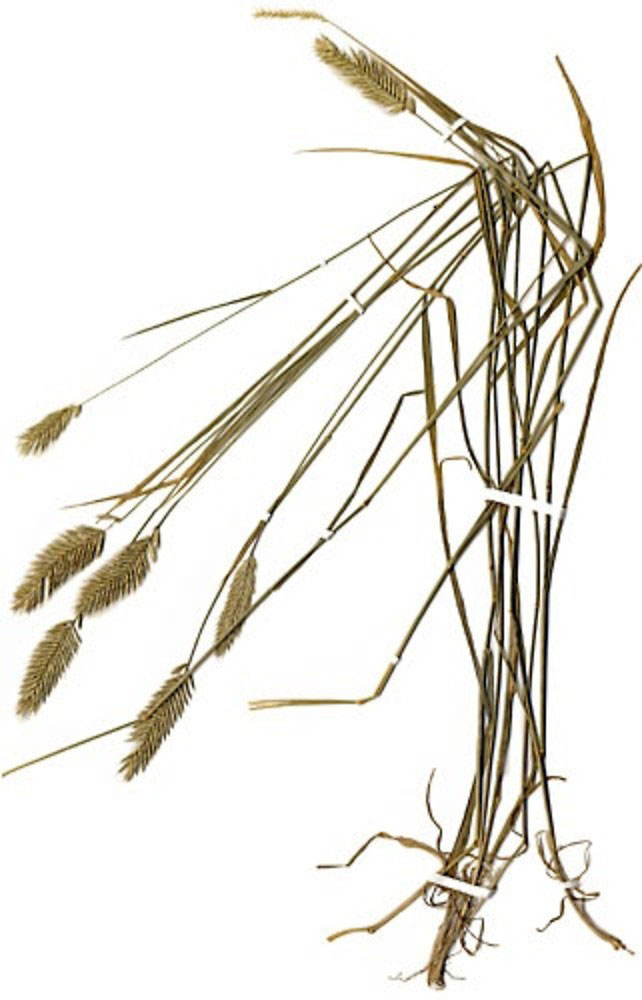 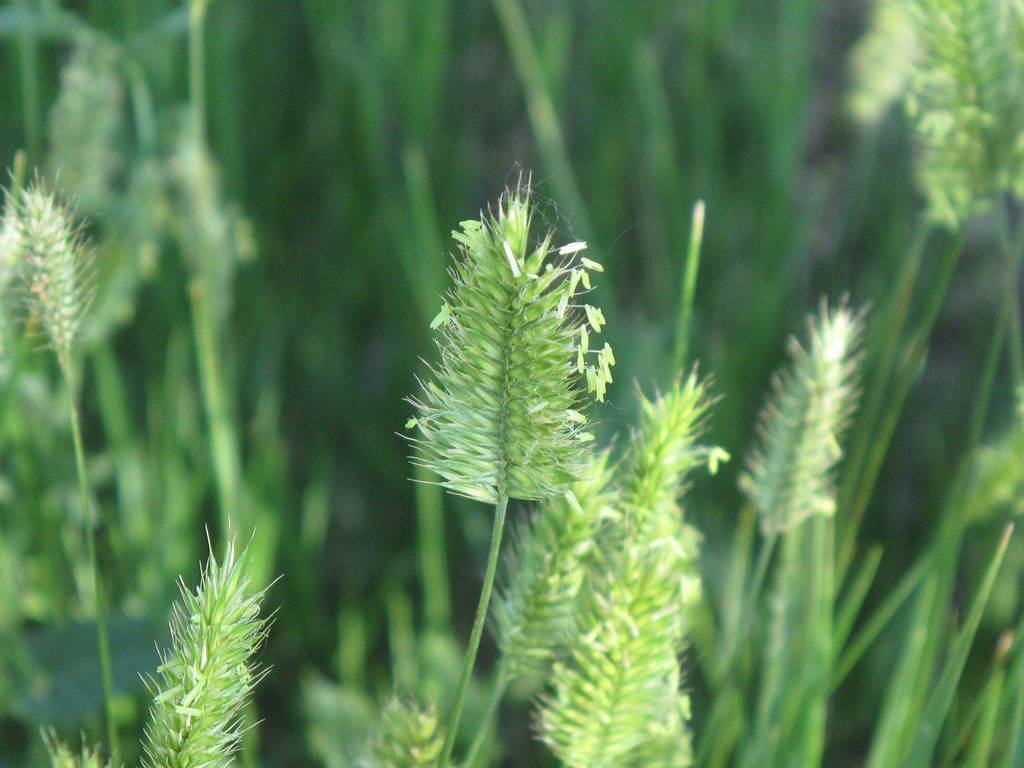 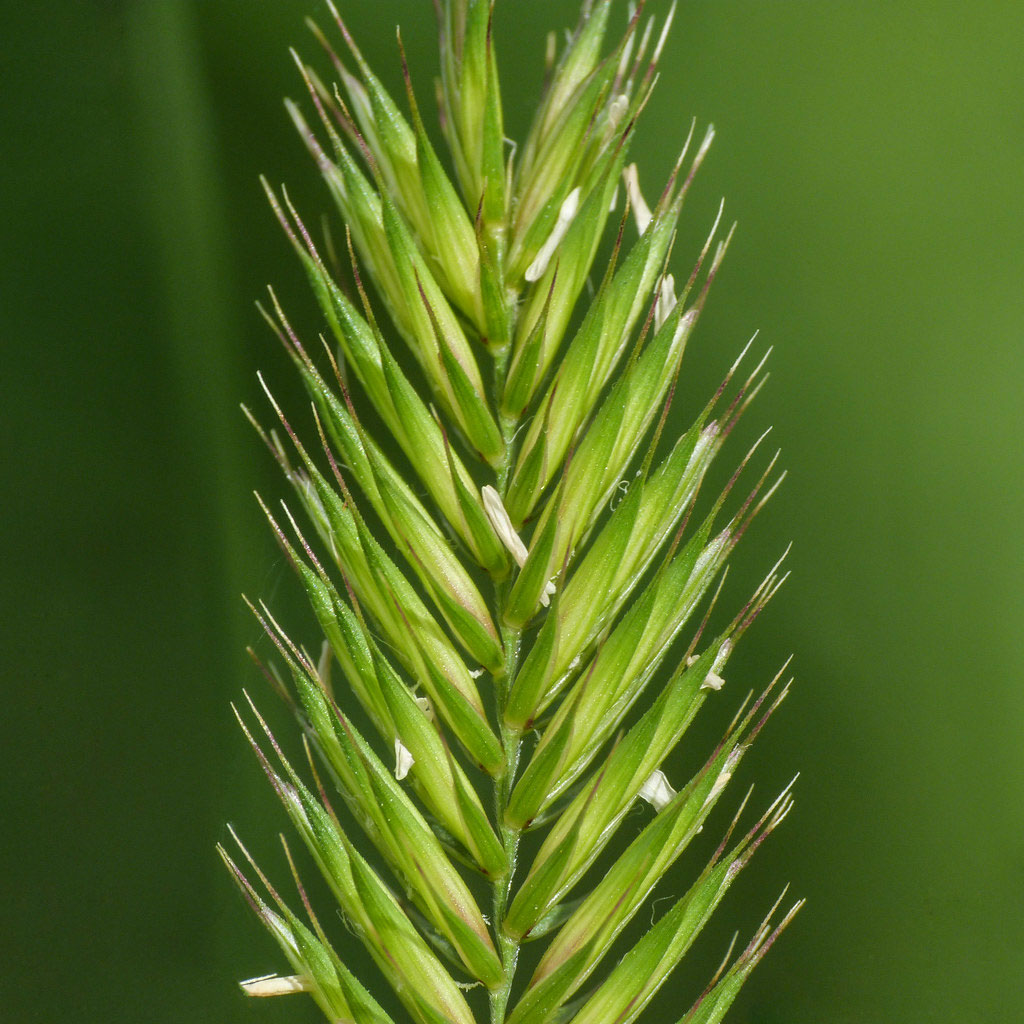 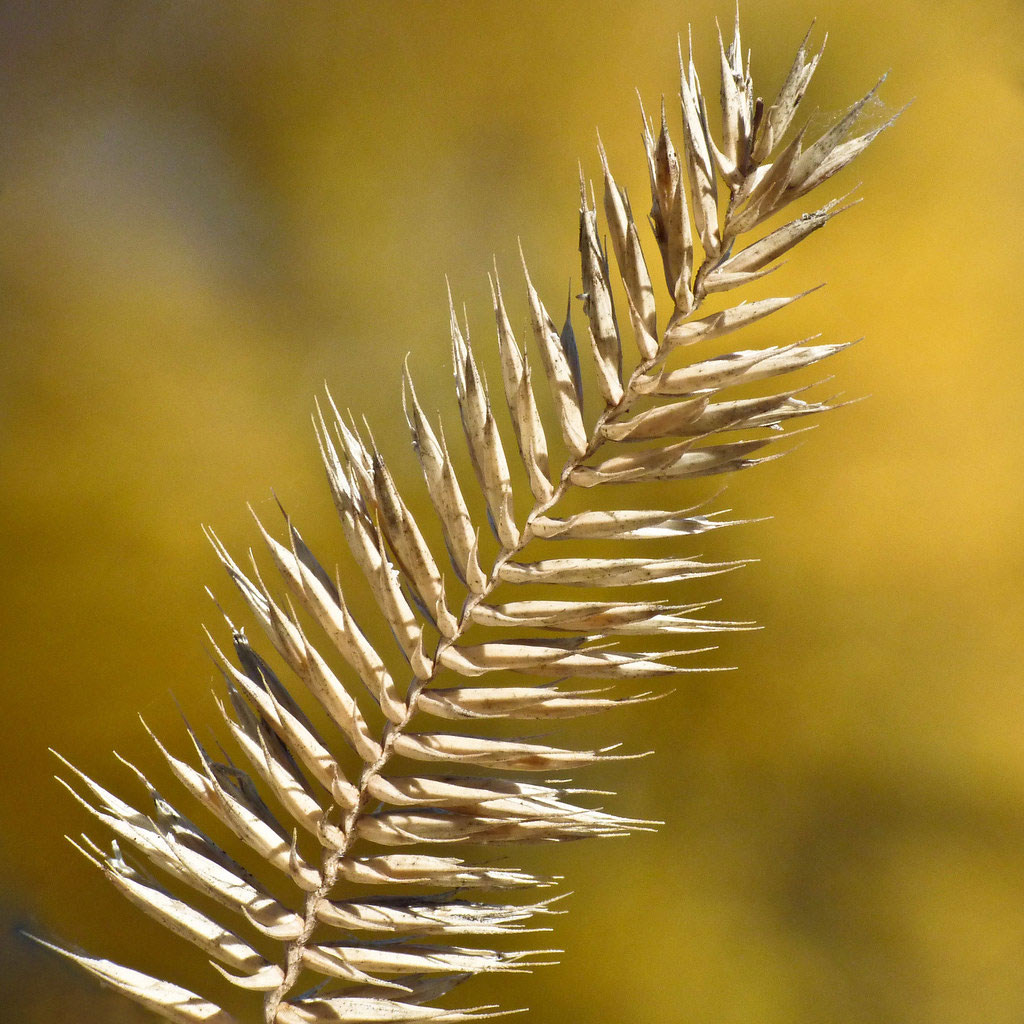 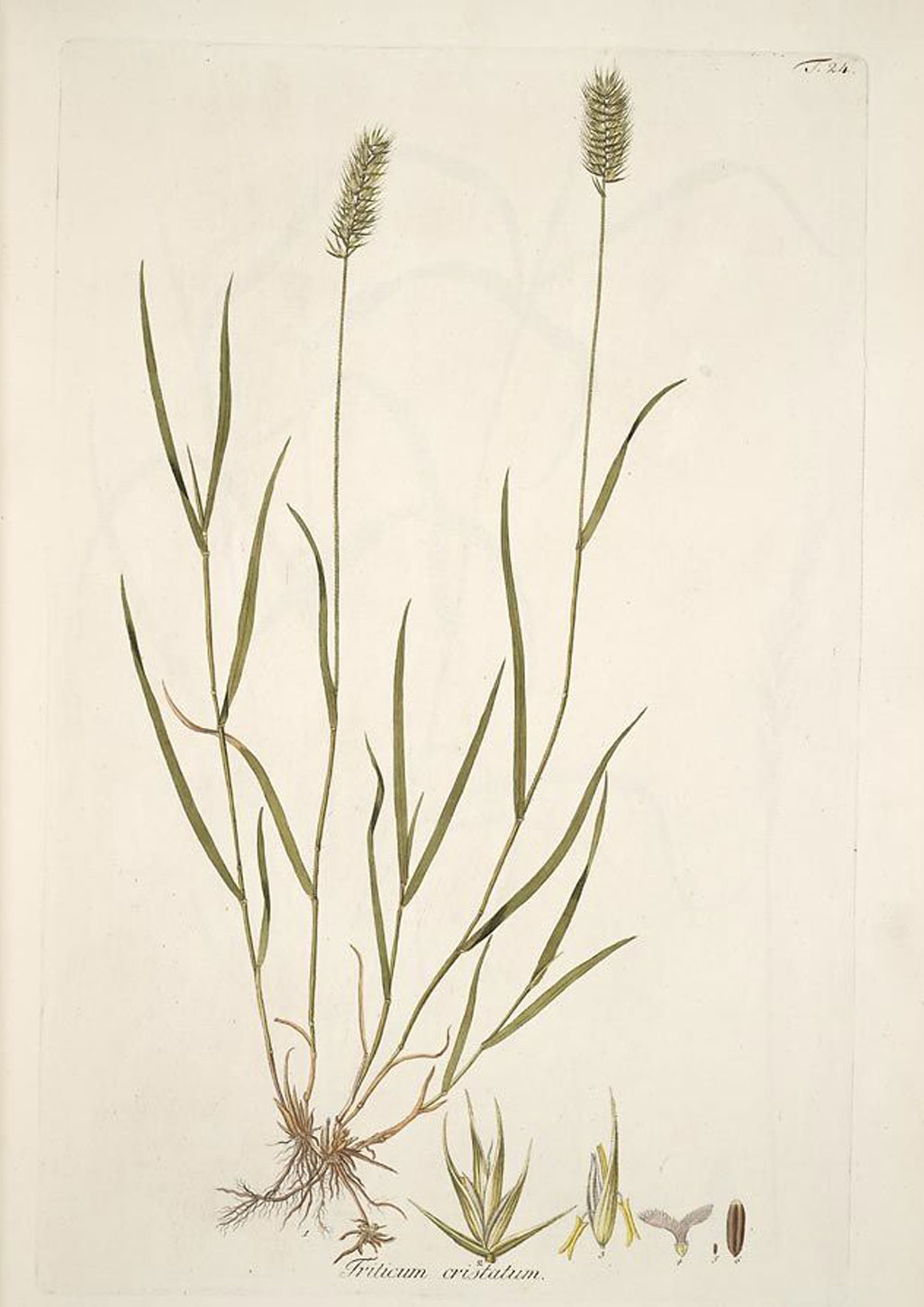 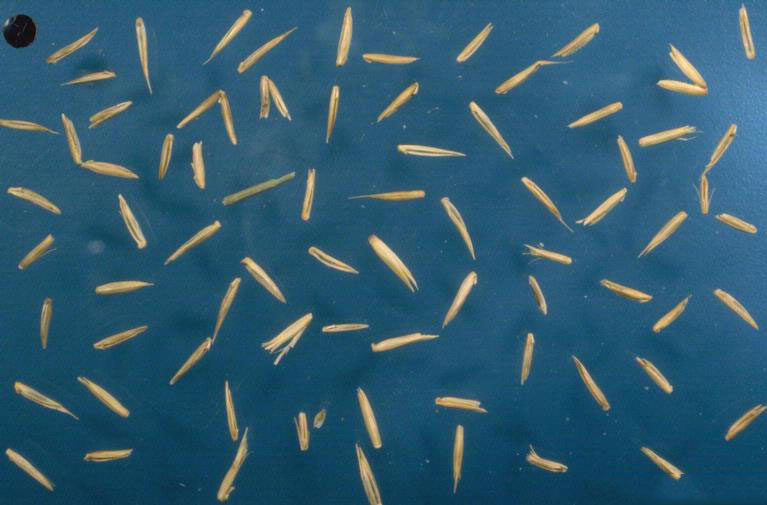 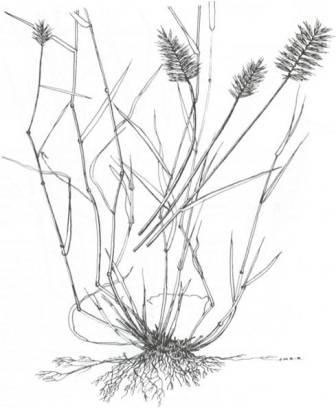 Crested wheatgrass is native to Russia or the desert regions of southern Siberia and is now considered naturalized in North America. The plant was introduced to North America in the 1930s, and has been planted as a forage species since. Crested wheatgrass was also seeded to reduce soil erosion on abandoned farmlands. The ability of the plant to establish and remain productive in an area for a long period of time has become a concern. In North Dakota, crested wheatgrass has been found throughout the state and has been reported in most counties.

It was introduced or released in 1983, from Ankara Turkey. Fairway has a rhizomatous growth habit which makes it well suited for soil stabilization.

It was released in 1994 and is a hybrid of four accessions. Quality forage value, high seedling vigor.

It was introduced or released in 1998 from Iran/Turkey. Roadcrest is shorter and has a finer leaf texture those other varieties, and as the name suggests, is used for roadside reclamation and low maintenance turf areas. It is more sod forming and less clumpy than other crested wheat grasses.

It was introduced or released from Siberia in 1297. It is a short and fine-stemmed and is capable of forming sod in dry land areas.

Crested wheatgrass is commonly recommended for forage production. It is edible to livestock and wildlife and is a desirable feed in spring and in the fall if it re-grows enough. It is used for cattle and horse winter forage, but protein supplements are required to ensure good animal health. It endures heavy grazing pressure (65% use and greater) once stands are established. The best forage types in order are Siberian, desertorum, and Hycrest.

Crested wheatgrass is useful for soil stabilization. They compete well with other aggressive introduced grasses, but because of this trait, they are not compatible in mixes with native species. Their drought tolerance, fibrous root systems, and good seedling vigor make these species ideal for reclamation in areas with 8 to 20 inches annual precipitation. These grasses can be used in urban areas where irrigation water is limited to provide ground cover and to stabilize ditch banks, dikes, pipelines, power lines and roadsides.

Management objectives for crested wheatgrass control should involve prevention, early detection, and containing established populations. Eliminating or reducing seed production and vegetative spread of established populations is also important. Seeds of crested wheatgrass can remain viable in the soil for up to five years; thus, infestations should be monitored for several consecutive growing seasons to prevent germination of new plants. Control methods should be combined into an integrated management system for the best long-term control of the plant. Management techniques should be site specific, determined by land use objectives, degree of crested wheatgrass infestations, desired plant community, and efficiency and limitations of available control measures. Control methods should be implemented to stress crested wheatgrass more than desirable, native species.

Mowing crested wheatgrass mid-season or when the plant is in the elongation stage can prevent the plant from going to seed, since carbohydrate reserves are being drawn down at this time for growth and reproductive structures. Consequently, regrowth may be minimal because carbohydrates may not be quickly refilled. Burning may be an effective control method if conducted prior to seed set and before the plant goes dormant. However, burning may only reduce the top growth of the plant, leaving underground tillers to survive. In North Dakota, crested wheat grass was reduced the first year in tall grass prairie sites, but was able to recover and was stimulated on some sites after a prescribed burn conducted in May. Prescribed burns may also unfavorably affect native grasses. Further research is desirable to determine the effects of prescribed burns for crested wheat grass control.

Several herbicides are available to control crested wheat grass, although most are not specific to the plant. Picloram, dicamba, glyphosate, and imazapic have all been successful. Contact your local county extension agent for recommended use rates, locations, and timing.