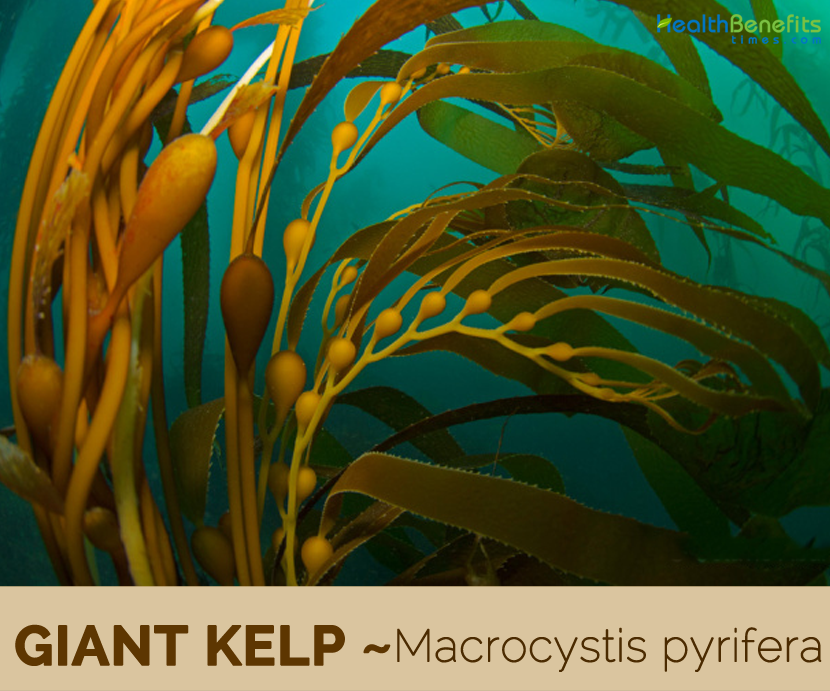 Macrocystis pyrifera, with many common names including Giant kelp, kelp, giant bladder kelp, Pacific kelp and brown kelp is actually a species of kelp (large brown algae), and one of four species in the genus Macrocystis. The plant belongs to the family Laminariaceae, the family of brown algal seaweed. Giant kelp is common along the coast of the eastern Pacific Ocean, from Baja California north to southeast Alaska, and is also found in the southern oceans near South America, South Africa, and Australia. Individual algae may grow to more than 45 meters (148 ft.) long at a rate of as much as 2 feet (61 cm) per day. Giant kelp grows in dense stands known as kelp forests, which are home to many marine animals that depend on the algae for food or shelter. Humans harvest kelp for it is rich in iodine, potassium, and other minerals, but the primary product obtained from giant kelp is alginate. Humans also harvest this species on a limited basis for use directly as food, as it is rich in iodine, potassium, and other minerals. It can be used in cooking in many of the ways other sea vegetables are used, and particularly serves to add flavor to bean dishes.

Giant Kelp is fastest-growing perennial seaweed that can grow at a rate of 2 ft. a day to reach over 40 to 65 meters (44 to 71 yards) in height in one growing season. The plant can be found growing on rocky shores of all world seas and oceans.  Giant kelp grows directly upon their parent female gametophyte. To establish itself, young kelp produces one or two primary blades, and begins a basic holdfast, which serves to anchor the plant to the rocky bottom. As the kelp grows, additional blades develop from the growing tip, while the holdfast enlarges and may entirely cover the rock to which it is attached. Growth occurs with lengthening of the stipe (central stalk), and splitting of the blades. At the growing tip is a single blade, at the base of which develop small gas bladders along one side. As the bladders and stipe grow, small tears develop in the attached blade. Once the tears have completed, each bladder supports a single separate blade along the stipe, with the bladders and their blades attached at irregular intervals. Giant kelp forests support and protect many marine species such as sea urchins, sea stars, crabs and many species of fish. 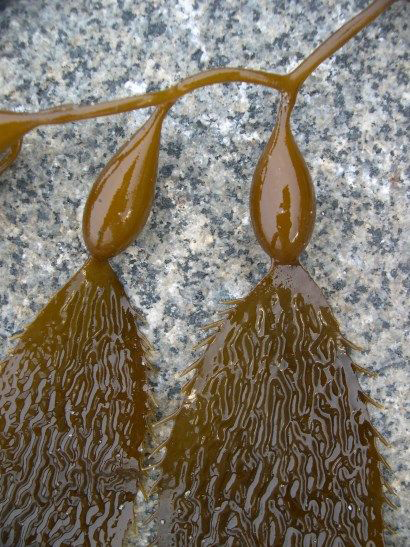 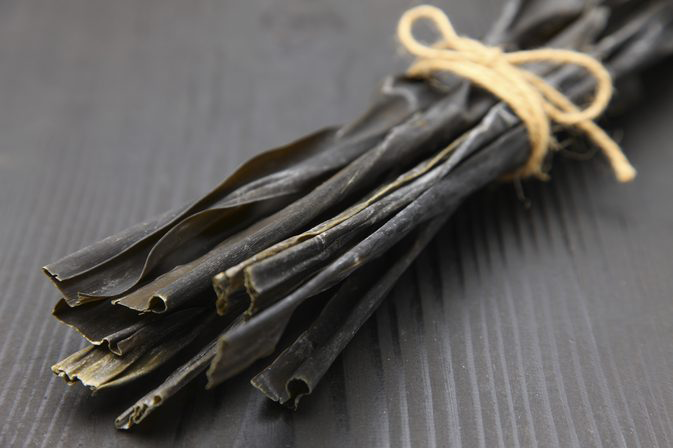 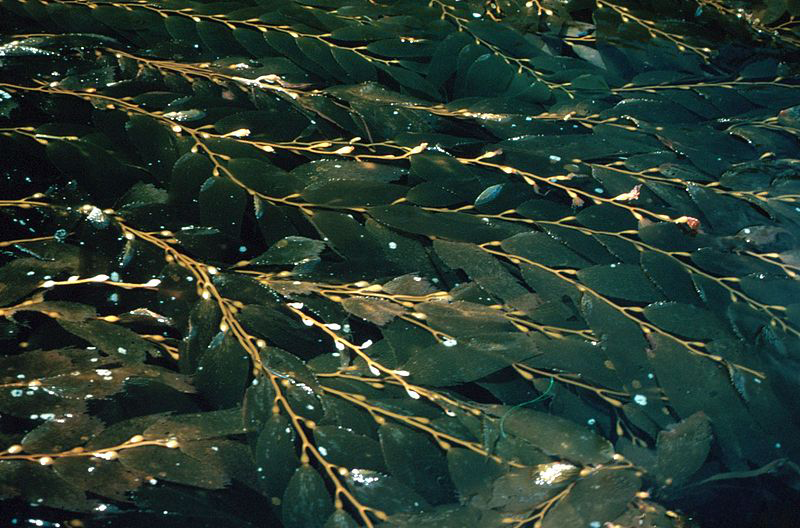 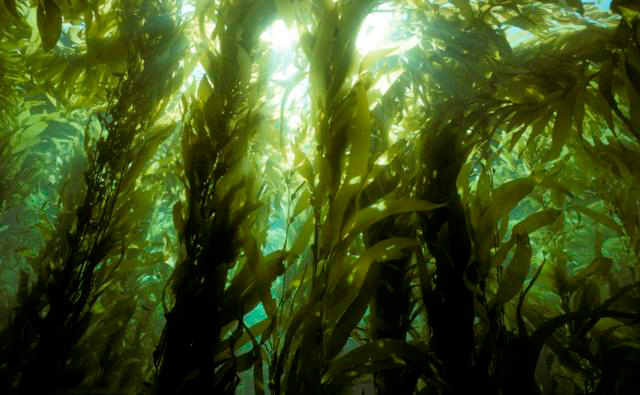 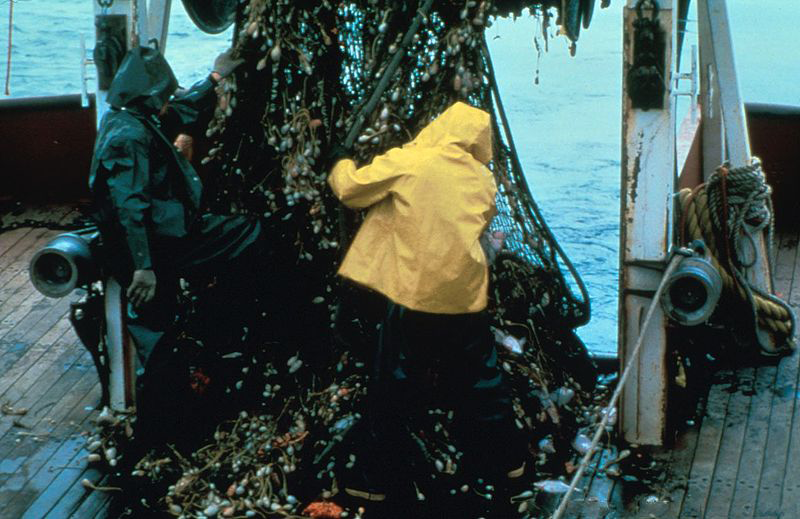 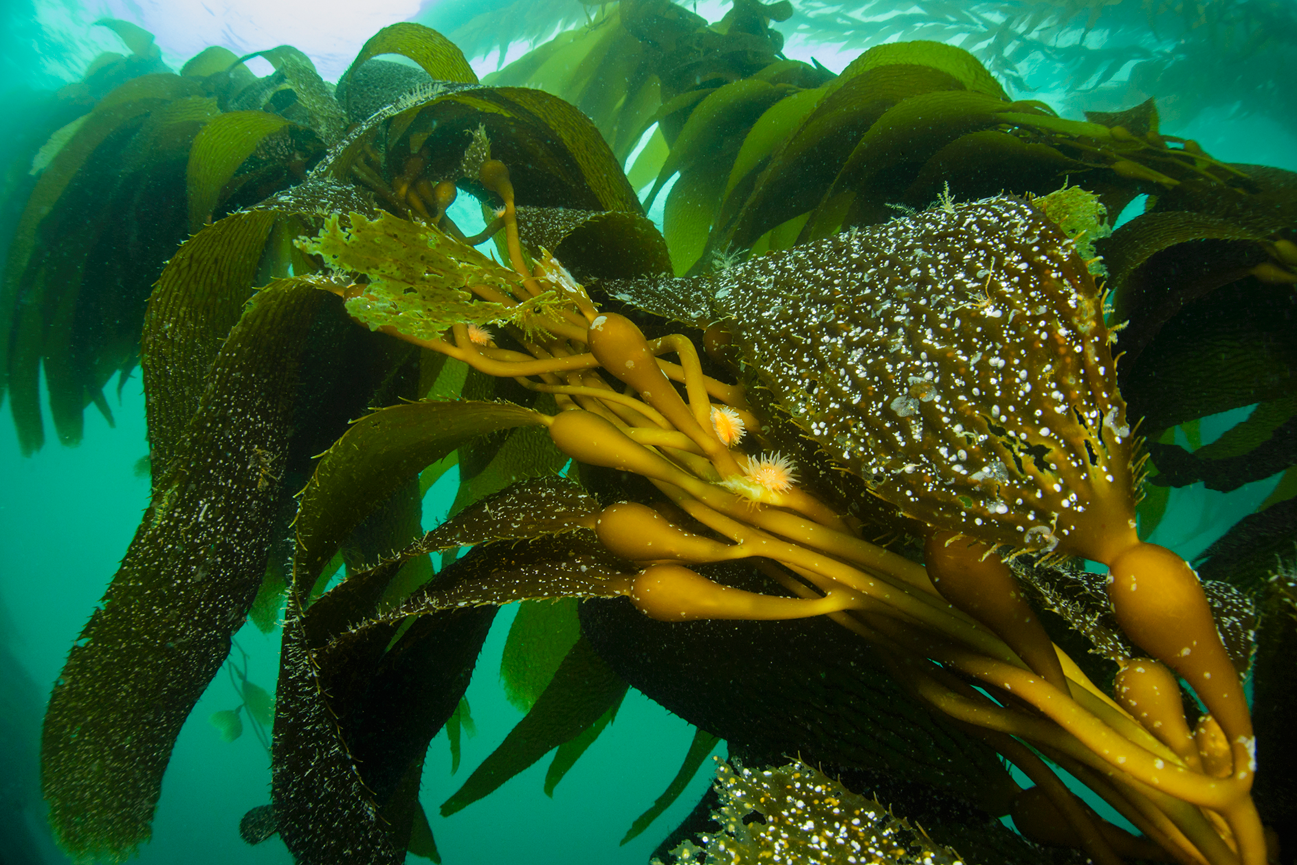 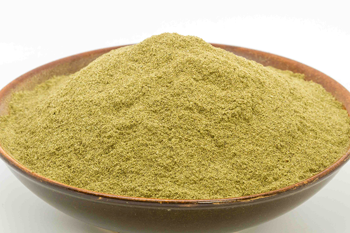 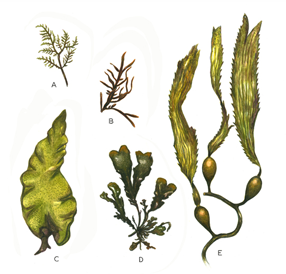 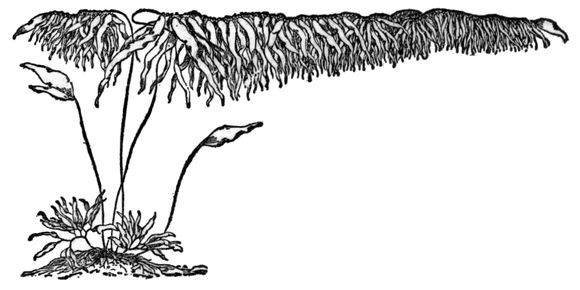 Giant Kelp is an edible brown seaweed that is rich in vitamins and minerals especially iodine. It has been traditionally used as natural iodine source and largely known for its health benefits for proper thyroid functions. It can also be used in cooking in many of the ways other sea vegetables are used, and particularly serves to add flavor to bean dishes. Let’s take a closer look at the health benefits that the plant provide to our body

Iodine is one of the most important elements in our thyroid gland and it helps to regulate hormonal function throughout the body. Giant kelp consists of good amount of iodine which helps in proper functioning of the thyroid health. Proper amounts of iodine guarantee a functional metabolism and proper enzymatic activity throughout the body. Giant kelp should be used frequently to solve all the thyroid related problems. (1)

Giant kelp consists of impressive amount of minerals (more than 40!), including essential minerals like calcium, boron, zinc, copper, and manganese all ensure that our bones remain strong and that any bone damage heals quickly. Healthy diet of giant kelp can help to prevent the start of osteoporosis or other bone mineral deficiencies. (2)

Talking about antioxidants, giant kelp is a wonderful source of vitamin C and other vitamins that are shown to be effective in seeking out free radicals and neutralizing them. Additionally, it contains “fucoidan”, which induces apoptosis, or cell death, in cancer cells, while leaving healthy cells alone. Giant kelp is often consumed specially by women in Asia because of its proven record against breast cancer. (3)

Giant Kelp consists of 16 different amino acids, which are the building blocks of protein. By helping to boost the protein content in our body, giant kelp help us regulate cellular growth, wound healing, muscle development, organ function, and a wide range of other necessary bodily processes that require proteins. (4), (5)

If you are trying to lose weight, giant kelp is one of the best options. Giant kelp has shown anti-obesity properties in many researches. The effect of fucoxanthin in fighting fat, however, is maximized by adding other elements like pomegranate oil to it.

As a distinctly alkaline food, giant kelp helps to maintain the acid-base balance in our body, which is vital for many bodily processes and digestion. (6)

7. Works against Inflammation and Bone Loss

Giant kelp consists of good amount of anti-inflammatory property. It is highly recommended to have foods that prevent inflammation to avoid many diseases including cancer. Here too fucoidan plays an important role. Apart from this property, having giant kelp as you age is very beneficial as it can prevent bone loss. It also increases bone density and bone ash weight.

As we have mentioned before giant kelp consists of high levels of iodine, which can actually prevent the uptake of irradiated iodine by the thyroid gland, thus protecting the body from the disastrous effects of radiation poisoning, which often leads to cancer. This herb is especially important in Japan, following the radiation disaster at Fukushima.