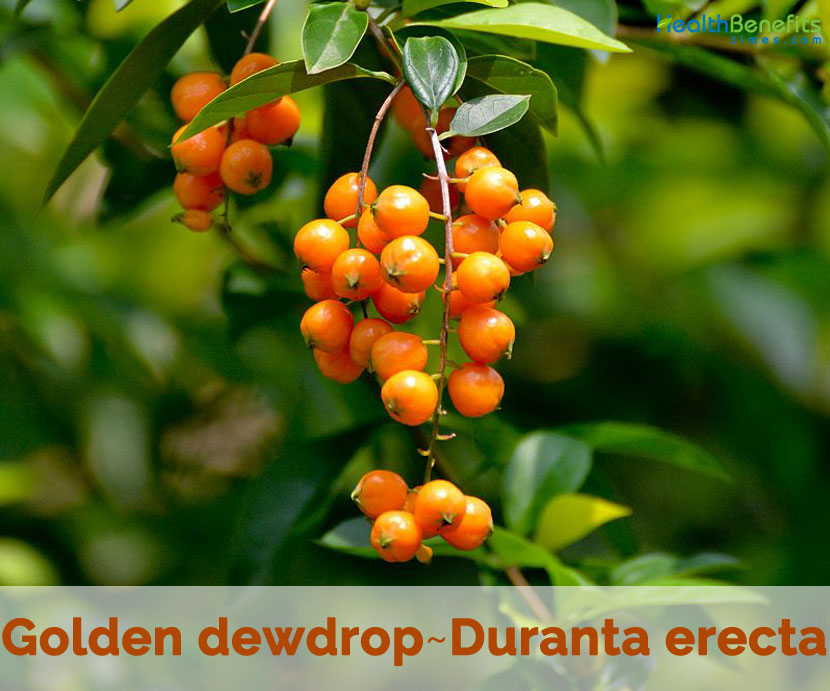 Duranta erecta popularly known as Golden dewdrop is a species of flowering shrub in the verbena family Verbenaceae. The plant is native from Mexico, Central America, and South America to Argentina, southern Florida (possibly naturalized), Bermuda, the Bahamas, and the West Indies. It is extensively cultivated as an ornamental plant in tropical and subtropical gardens throughout the world, and has become naturalized in many places. It is considered an invasive species in Australia, China, and South Africa and on several Pacific Islands. Popular common names include Golden dewdrops, Pigeon berry, Skyflower, Vanilla bush, Forget-me-not tree, duranta, golden eardrops, angels whisper, Brazilian sky flower, garden dew drop, golden tears, Creeping skin flower, forget-me-not bush and pidgeon berry. In Mexico, the native Nahuatl name for the plant is xcambocoché. In Tonga it is known as mavaetangi (tears of departure).

The genus name is in honor of Castor Durantes, a fifteenth century Italian botanist. The specific epithet erecta means “upright” in Latin. The plant is also known as D. repens, from the Latin for “creeping”. The latter name was initially used to identify smaller-leaved varieties of the species. Duranta is registered as an invasive weed by many councils of Australia. It is a prolific, fast growing weed that is spread by birds from domestic areas to natural reserves. It was introduced and marketed as a hedge plant some years ago. Many people now fight to keep this thorny pest under control. It is highly ranked in the most invasive weeds in Australia. The leaves and fruits are also poisonous to people and animals and they are reported to have caused the poisoning of domestic cats and dogs. It is reported to invade riparian habitats and scrublands and it is listed as one of the 50 most invasive species in New South Wales and among the top 100 most invasive plants in southeastern Queensland.

Leaves are light green, elliptic to ovate, opposite, and grow up to 7.5 cm (3.0 in) long and 3.5 cm (1.4 in) broad, with pointed or rounded tips and pointed base; the margins, entire or slightly toothed. Petiole is 1.5 cm long.

The zygomorphic, perfect, complete flowers are arranged in terminal and axillary pendulant racemes blooming almost all year long. The calyx has 5 fused greenish sepals. The corolla has 5 fused purple-pink petals often with a white edge and/or striping. There are 4 functional stamens and 1 staminode that are fused to the throat of the corolla. The ovary is superior with 4 locules and multiple ovules. Flowering normally takes place from May to September. The full clusters of fragrant, pale blue flowers attract butterflies in summer.

Fertile flowers are followed by small globose fleshy, yellow or orange berry, up to 11 mm (0.43 in) diameter and containing several seeds. The berries change color from orange to a dark purple similar to mulberries once ripened and are edible without side-effects. However, songbirds eat the fruit without ill effects. The seeds of this species are dispersed naturally by birds that eat the fruits, and accidentally through garden waste disposal by humans and the nursery trade.

Flowers and fruit are often found on the plant simultaneously and make an attractive show. Yellow fruit often hangs on the plant into the winter if the birds don’t eat them. 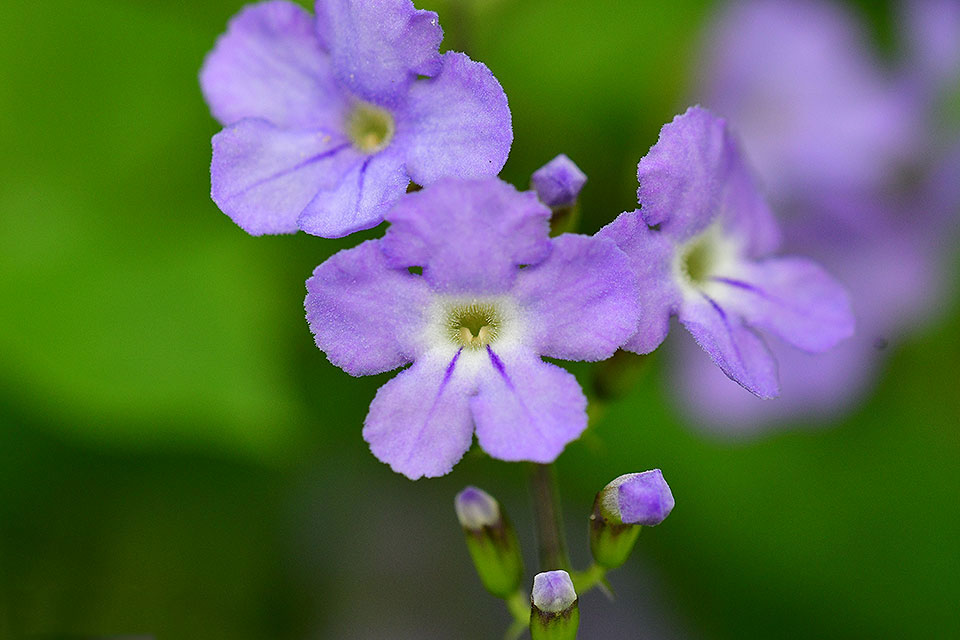 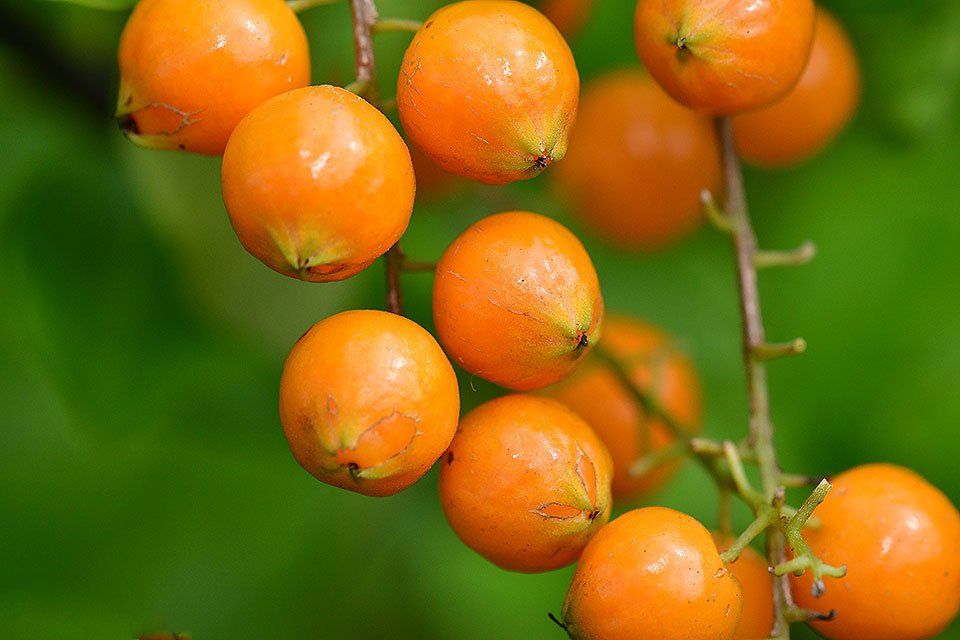 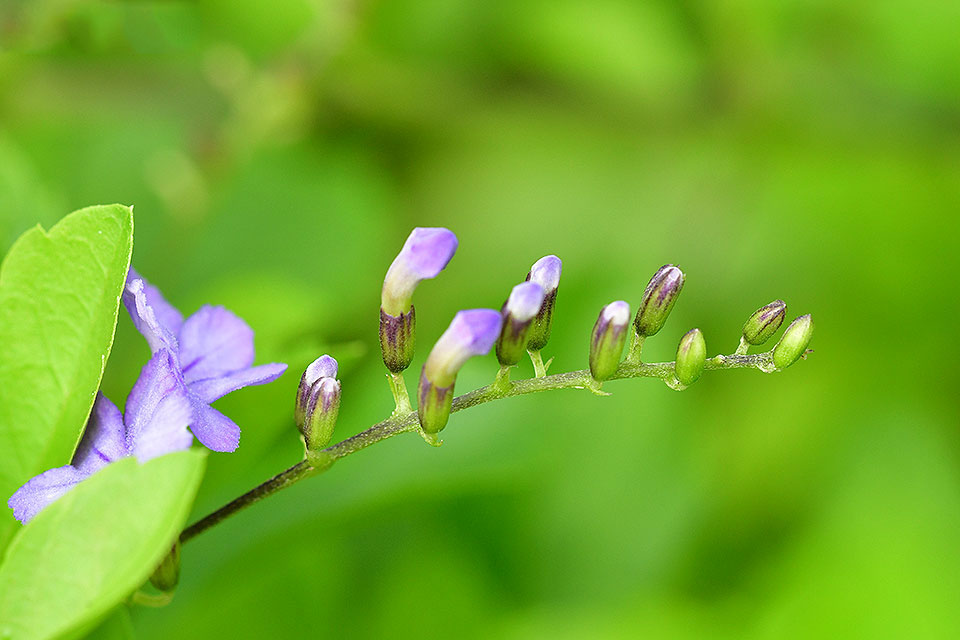 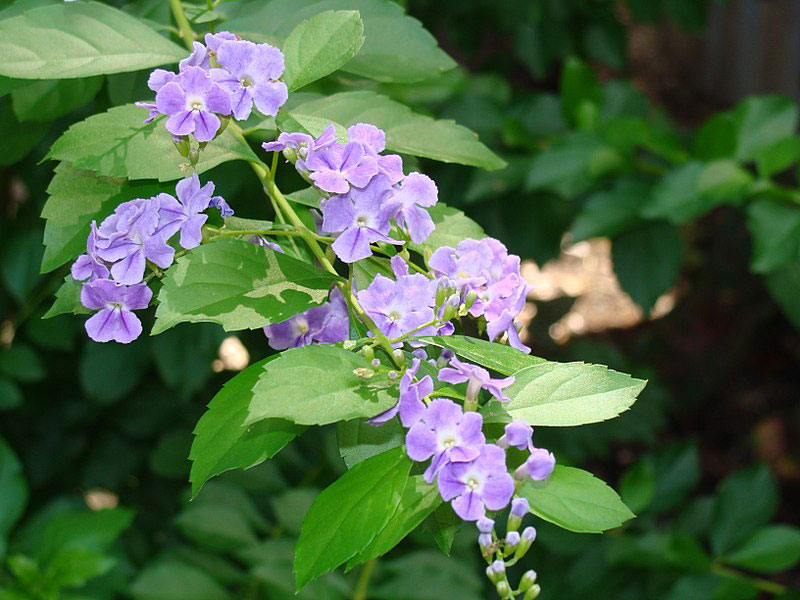 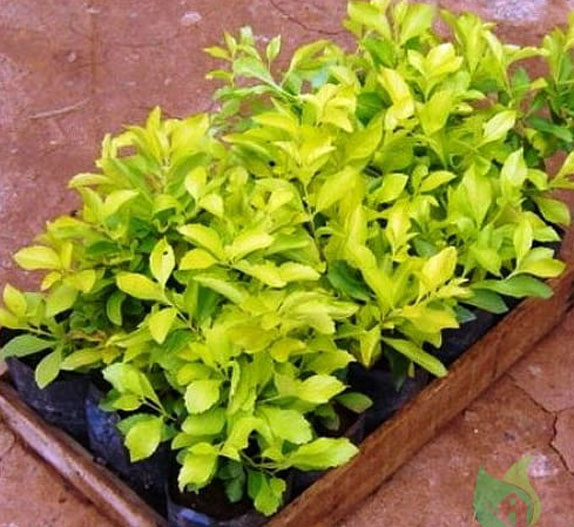 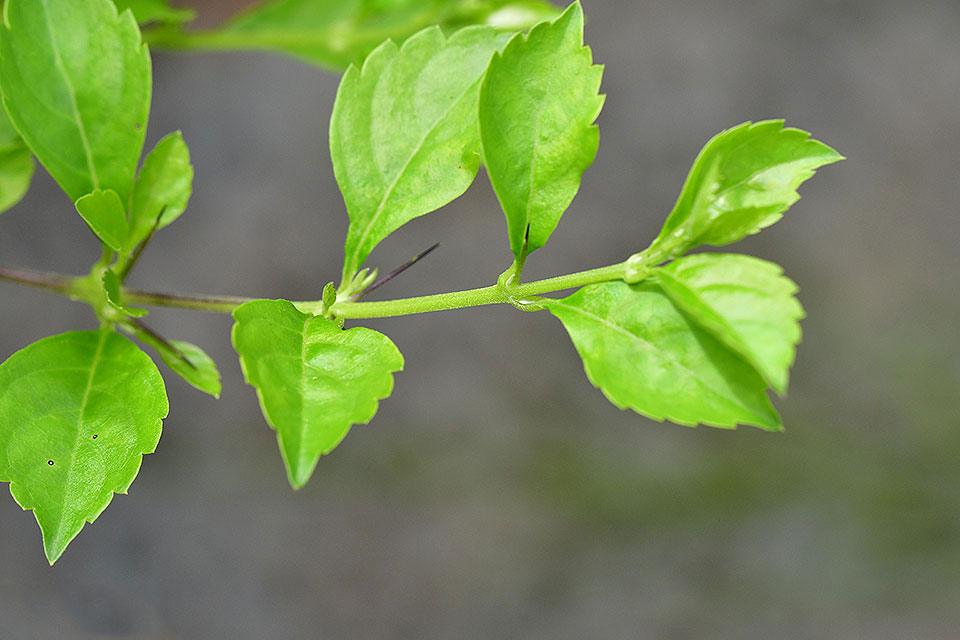 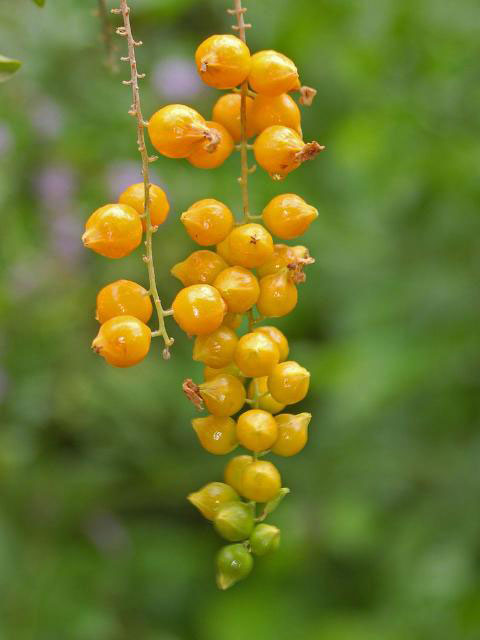 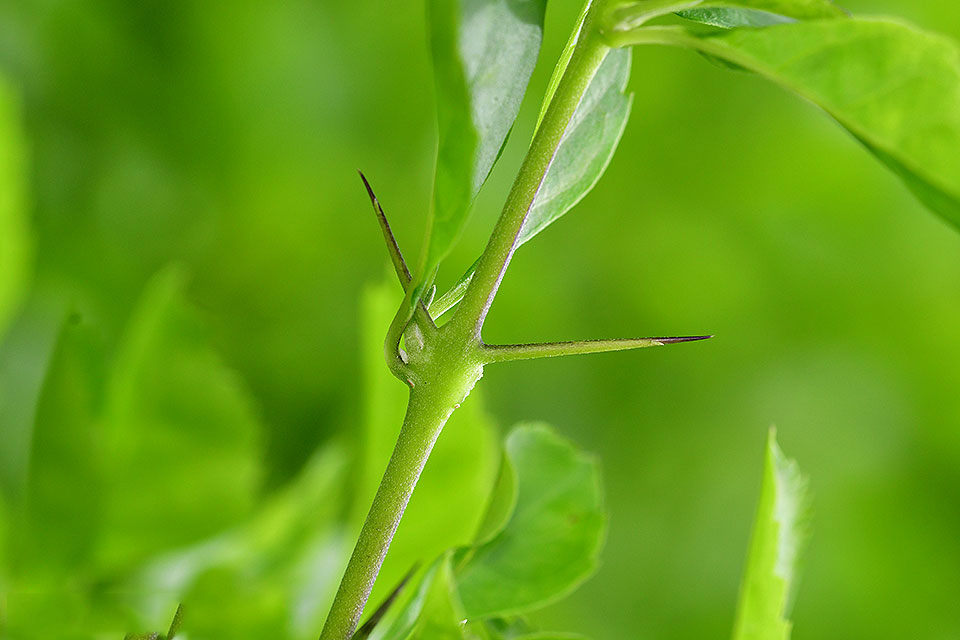 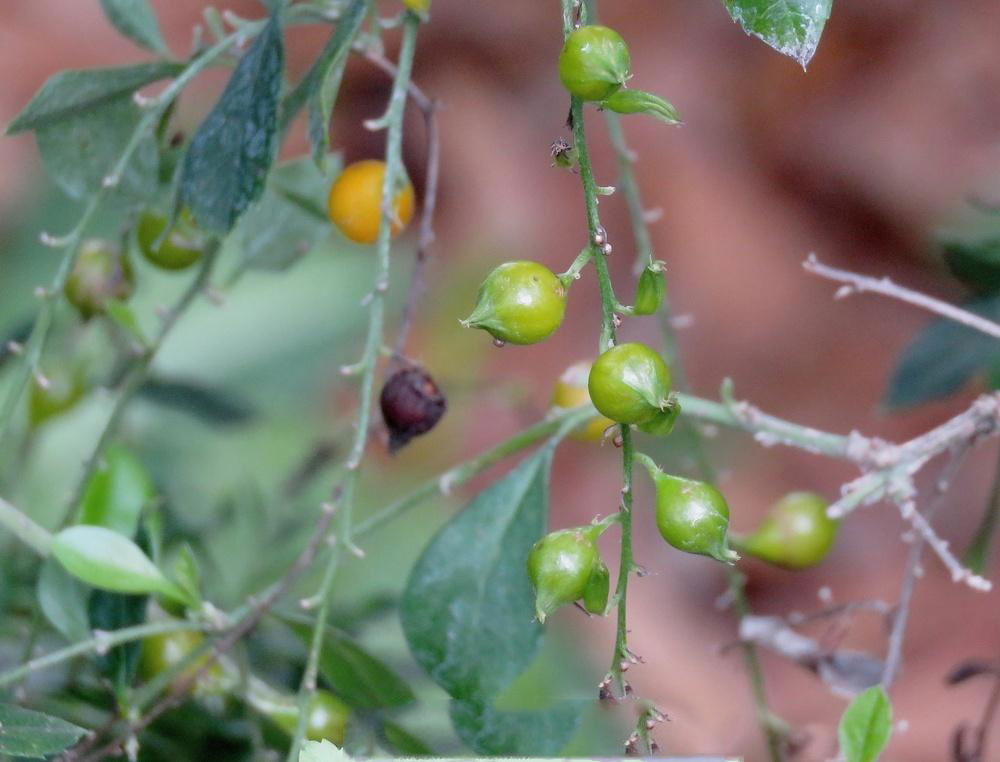 G Herbs and Spices
Share. Twitter Facebook Google+ Pinterest LinkedIn Tumblr Email
Previous Article7 Foods You Need To Be Eating For Spinal Health
Next Article Cooking 101: Spices You Should Try To Add In Your Next Meal