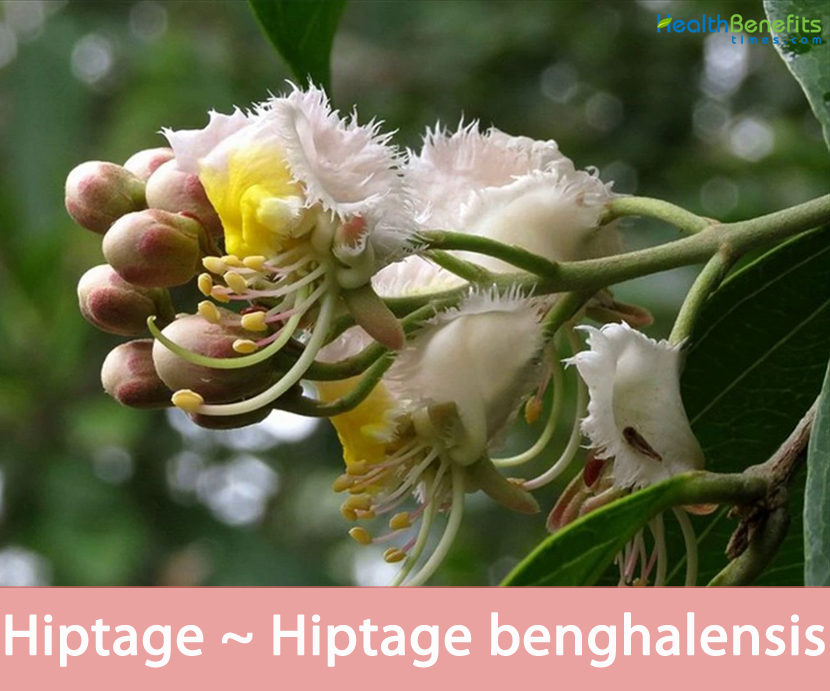 Genus name Hiptage is derived from Greek word hitamai, which means “to fly”, referring to its unique three-winged fruit known as “samara”. Benghalensis is derived from the historic region of Bengal, where it is a native species. “Helicopter flower” name refers to the shape of the flowers, like three blades of a helicopter fan. It has also been recorded from Currumbin on the Gold Coast and in the Wide Bay pastoral district. In northern Queensland there is a much larger infestation near Mossman. This species has occasionally become naturalized in the coastal districts of south-eastern and northern Queensland.

Hiptage (Helicopter Flower) is a large, perennial, woody, much-branched, straggling or climbing evergreen, vine-like shrub with white or yellowish hairs on the stem. The plant normally can reach a height of 10-15 m. The plant is found growing in open forests, secondary forest, forest edges, disturbed sites, along river banks in semi-evergreen and evergreen forests, in sacred groves, clearings, forest margins and on a wide range of soils. Its habitat is variable and prefers climates ranging from warm temperate to tropical. In Hawaii, where H. benghalensis is considered a weed, as it is in Australia, Mauritius and Réunion, it grows from sea level to 1,000 m (3,281 ft). H. benghalensis is cultivated for its white-pink scented flowers.

The simple leaves are oppositely arranged along the stems and borne on short stalks (i.e. petioles) up to 1 cm long. These leaves are relatively large about 6-20 cm long and 4-9 cm wide and are usually somewhat elongated in shape (i.e. lanceolate to ovate-lanceolate), and have long-pointed tips (i.e. acute or acuminate apices). Their upper surfaces are bright green and somewhat glossy in appearance, while their undersides are somewhat duller and paler in color.

Flowers are fragrant and borne in clusters in the forks of the upper leaves (i.e. in axillary racemes) or at the tips of the branches (i.e. in terminal racemes). Each flower cluster consists of 10-30 flowers and can be up to 20 cm long. The individual flowers are borne on short stalks (i.e. pedicels) 15-25 mm long, which have some small bracts on them (each about 3 mm long). The flowers have five sepals about 8 mm long that are partially fused together at their bases (i.e. into a calyx tube) and there is a reddish-brown colored gland about 4 mm long near the base of one of these sepals. They also have five rounded (i.e. sub-orbicular to obovate) petals (1-2 cm long) with fringed margins. These petals are white, cream or tinged with pink, but one is slightly larger and has a bright yellow center.

Each flower also has ten stamens that are arranged in two rows. Nine of these stamens have relatively short stalks (i.e. filaments) about 5 mm long, while the other one is much longer (10-12 mm long) and is almost as long as the style (13-15 mm long). Flowering may occur throughout the year, but is most abundant during spring in south-eastern Queensland. Flowers have very interesting shape and look like a decorative accessory, with fluffy-toothed edges. The fragrance is very strong and pleasant, resembles fruity perfume. Make sure to provide lots of light for profuse blooming. 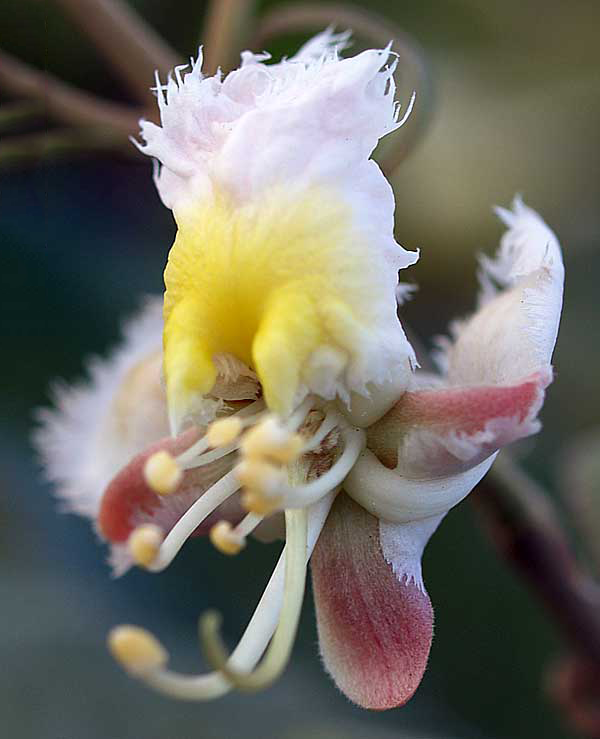 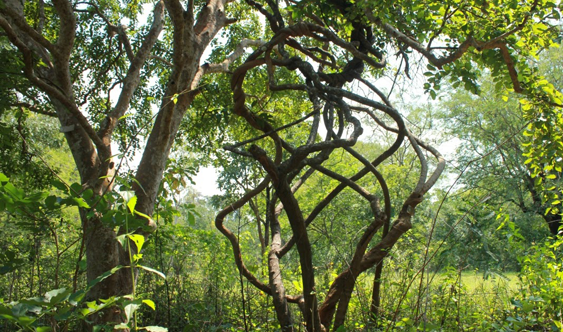 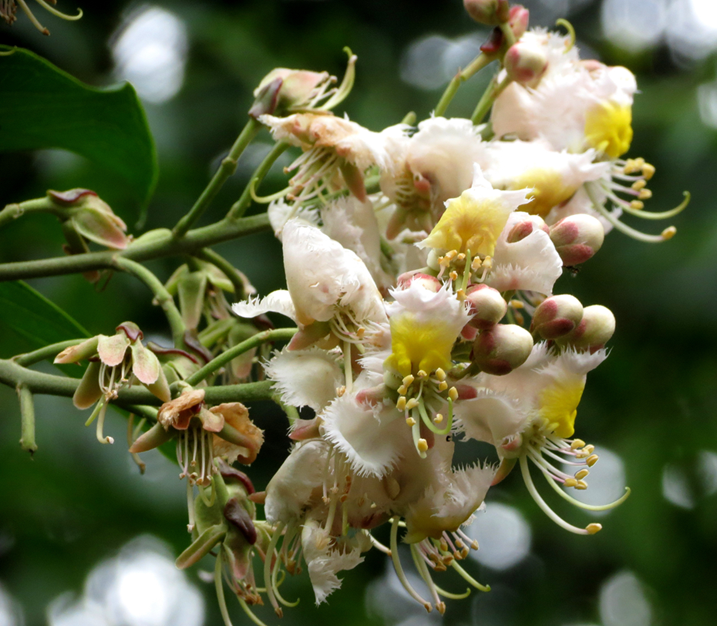 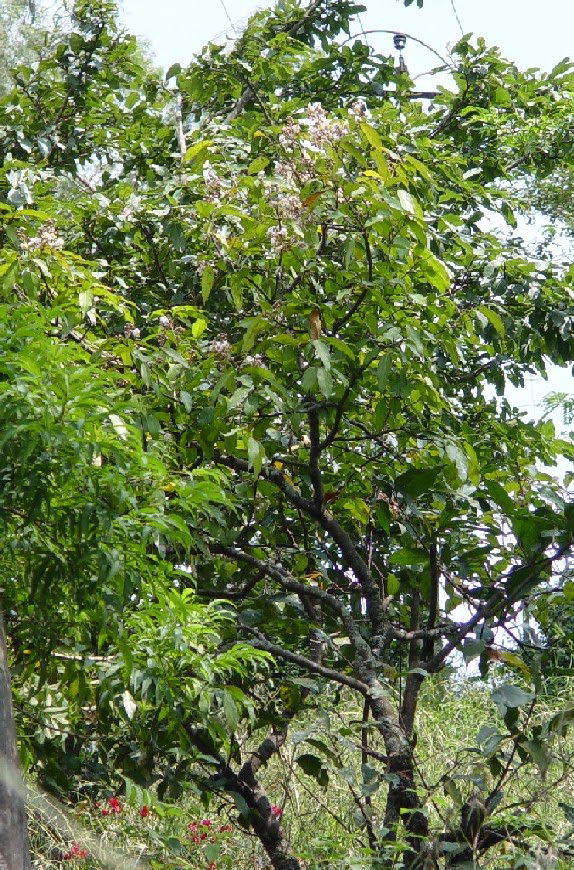 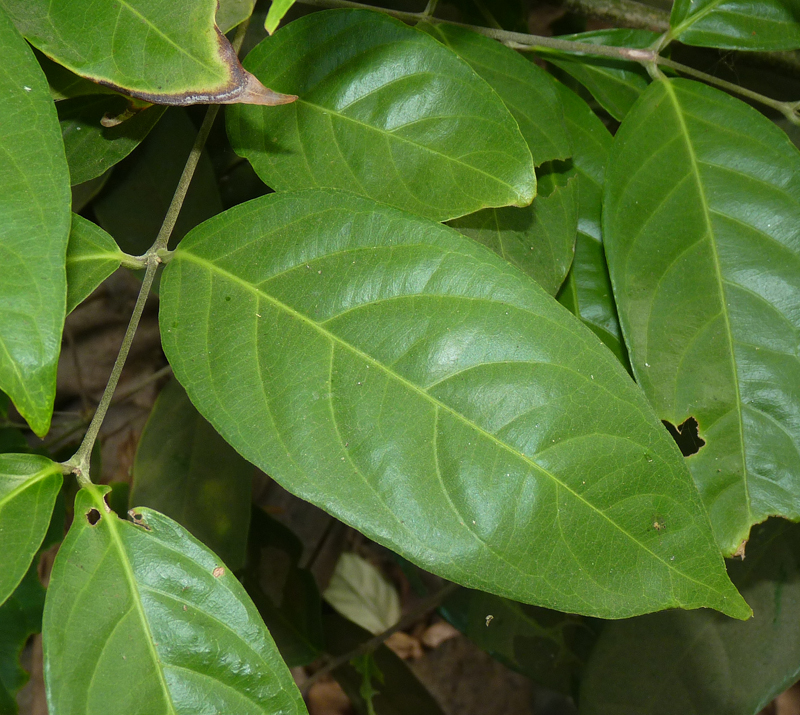 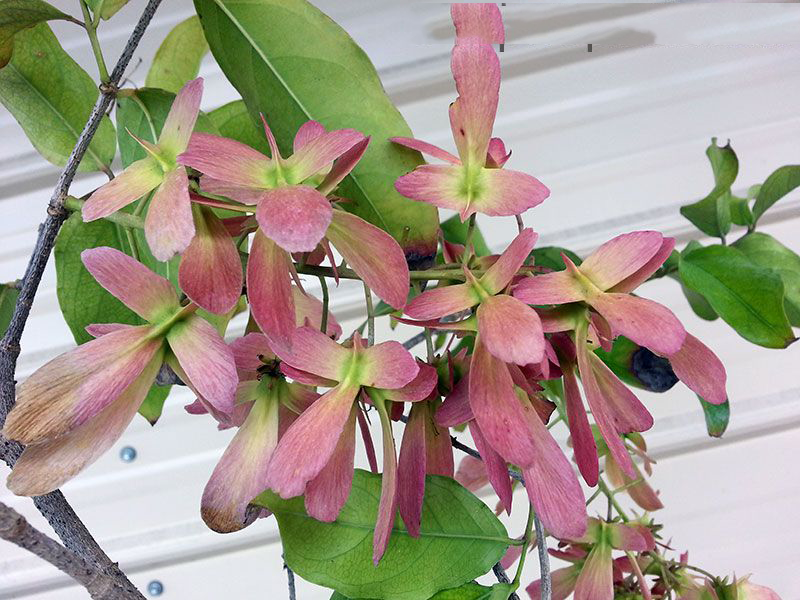 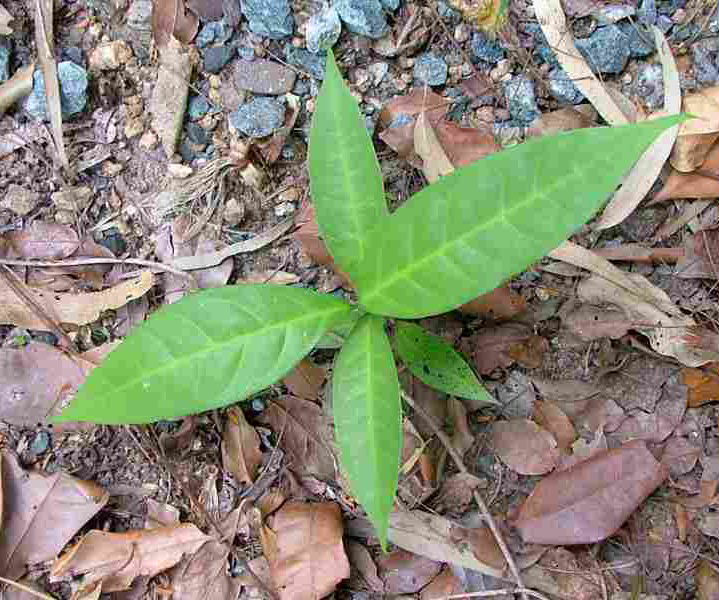 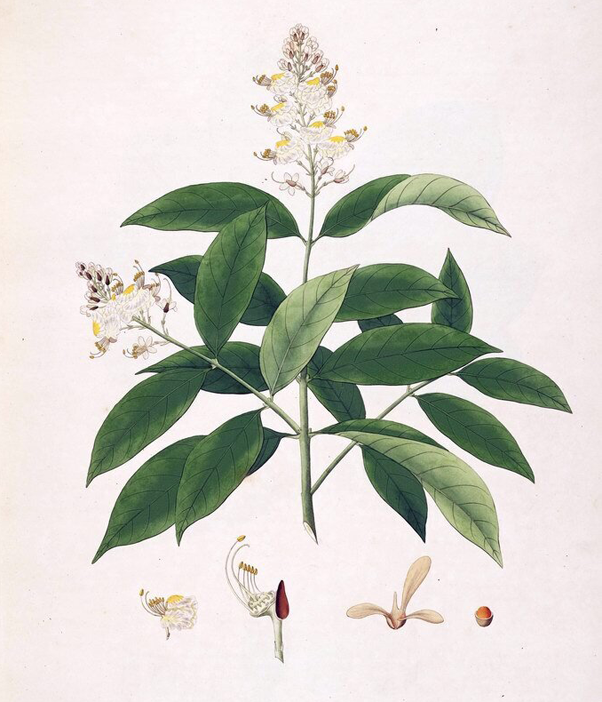 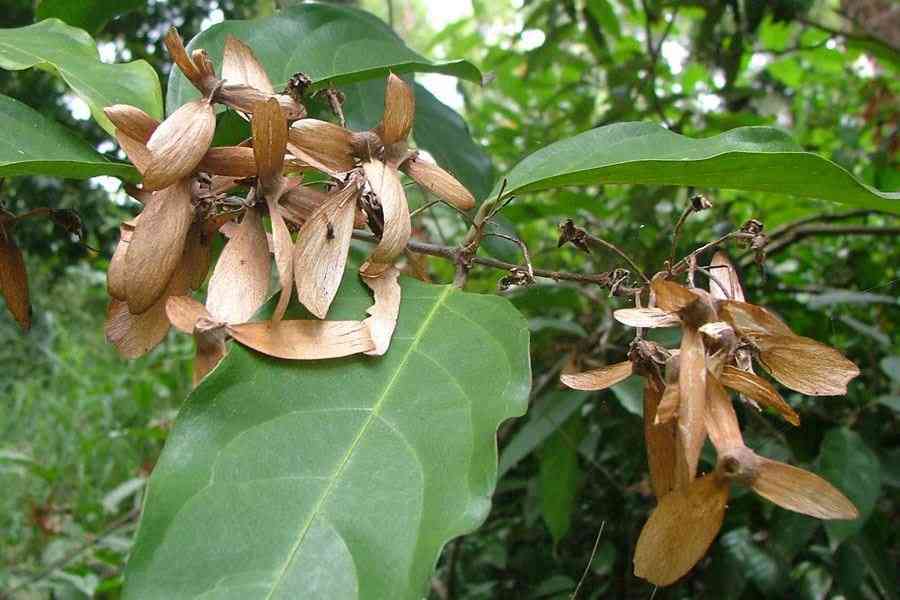 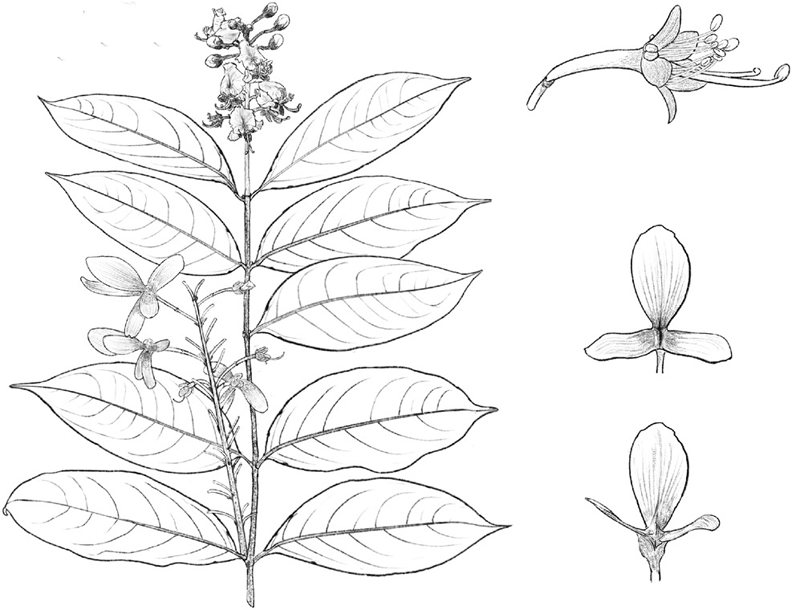 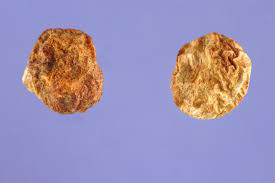 Fertile flowers are followed by three-winged fruit that are very distinctive (i.e. the fruit is a samara). The wings on the fruit are elongated in shape about 2 to 6 cm long and one of them is usually slightly longer than the other two. The developing fruit are green or reddish-green in color, but eventually turn pale brown when mature. Each fruit consists of 1-3 rounded (i.e. sub-globose) seeds.

Hiptage (Hiptage benghalensis) is most commonly naturalized in closed forests and along waterways, and prefers moist and shady habitats. However, it has also been found growing in suburban gardens, in hedges, and in waste areas (apparently where it has not been deliberately planted). While its distribution is currently quite limited, this species is thought to have the potential to be a problem weed throughout the wetter tropical, sub-tropical and warmer temperate regions of Australia.

Mechanical control without a follow-up chemical treatment is not effective. Branches should be cut before flowering to reduce seed production, but herbicide stump treatments are required to prevent regrowth and to ensure plant kill.

Several screening trials have been conducted to investigate and assess herbicides to control H. benghalensis, in Hawaii, USA and Queensland, Australia. Treatment of cut stumps was used in La Réunion with branches cut at ground level and glyphosate applied, and basal bark applications of triclopyr leading to 50% plant kill. Survivors were plants with larger diameter stems in which the treatment did not cover the circumference of the stem completely.

There have been no known efforts at biological control of H. benghalensis.