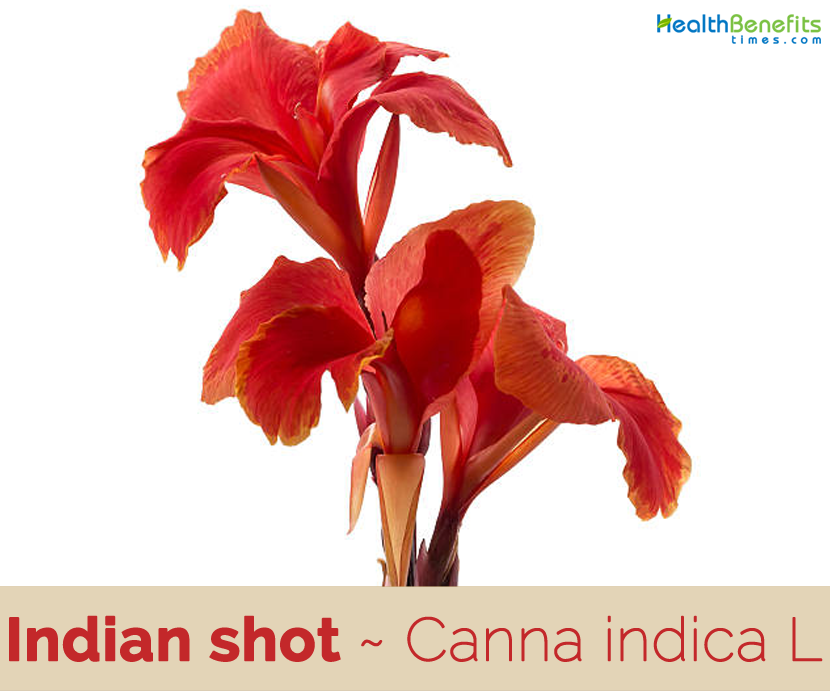 The genus name canna comes from the Greek kanna and the Celtic cana which refers to ‘a reed-like plant’ and is also the root of the musical term ‘canon’. The name canna was applied to this genus as early as 1576 and was formally given to the genus by Linnaeus in his seminal work Species Plantarum. Species epithet ‘edulis’ means ‘edible’, referring to the starchy rhizomes. Canna is famously called Indian Shot. The story is that during an uprising in India, those loyal to the British were running out of ammunition. So they filled the barrels of their rifles with canna seed. The rock hard, perfectly round seed was used as a substitute for lead shot in muzzle loading guns. Hence the name Indian Shot.

Each  and  every part  of  the plant  is  useful for  having  medicinal  activity. The plant provides food (mainly the root), medicines and a range of commodities. It is often cultivated on a home scale for these uses, mostly in S. America and Southeast Asia; whilst it is grown on a small scale in Australia as a commercial source of arrowroot. The plant is widely grown through the tropics and subtropics as an ornamental, being valued especially for its flowers and attractive leaves.

Indian shot is a coarse, rhizomatous, erect, robust, long lived perennial, herb that grows from 90 centimeters to 3 meters tall. The plant is found growing around villages, roadsides, in coconut plantations, clearings, in forest near streams, marshes, lake margins, spoil banks, roadside ditches, wetland edges, stream banks, old gardens, disturbed sites, waste areas and other moist areas. The plant is grown on most types of soil, except heavy clay, provided there is adequate drainage, since it will not tolerate water logging. The best yields are obtained on deep sandy loam, rich in humus. Roots  are thick,  cylindrical  and creamy  white  in color with  a  diameter  of  2-5 mm  with  numerous  root  hairs. Thinner primary and secondary lateral roots are also seen.

Stem is a pseudo stem which reaches up to 1.5-2m in height.  It is erect, herbaceous, sturdy and cylindrical encircled by the sheathing leaf bases.

Leaves are large and foliaceous, lanceolate or ovate reaching up to 65-70 cm in length and 30-35 cm in width.  Having large laminae up to 60 cm long. Inflorescence is waxy-glucose erect peduncle about 30 cm long. Leaves are dark green with purplish brown margins and veins. They are carline, simple, alternate and spiral. The oblong leaves have their petioles extending downwards to form a sheathing base around the stem. The lamina is pinnately, parallel veined. Leaf margins appear smooth and wavy with acute apex.  Surface of the upper leaves are green, dark copper or purplish, while the lower surface covered with a layer of white as talcum powder.

The flowers can be red, yellow or occasionally red and yellow (i.e. yellow with red spots or vice versa) and are quite showy. They are borne singly or in pairs (i.e. monochasial cymes) and arranged into larger branched clusters (i.e. with 6-20 flowers) at the tips of the flowering stems. Each flower appears to have five ‘petals’ but these are actually other floral structures (i.e. staminodes and petaloid filaments) that have become modified to imitate petals. The petals are actually the three bract-like structures below these false ‘petals’ (4-6.5 cm long and 0.4-0.7 cm wide). They are fused together at the base (i.e. into a perianth tube 5-15 mm long) and their margins are curved inwards. Each flower has three slightly different types of false ‘petals’ (i.e. three outer staminodes, an inner staminodes and a petaloid filament). The three outer staminodes are relatively broad (3.5-6 cm long and 0.5-1.5 cm wide) while the inner staminode (i.e. labellum) is usually somewhat narrower (up to 4-5 cm long and 0.8 cm wide) with its tip bent backwards (i.e. it has a recurved apex). The single petaloid filament is narrower again (3-4 mm wide) and has an anther about 10 mm long about half way up one of its sides. Each flower also has three narrow sepals (9-17 mm long and 2-5 mm wide) and their bases are also surrounded by a floral bract (5-30 mm long and 5-15 mm wide) and bracteoles (5-20 mm long and 3-8 mm wide). Flowering occurs mainly during August to October. Flowers are hermaphrodite.

The papery capsules are oval (i.e. ellipsoid) to almost rounded (i.e. sub-globose) in shape, about 1.5-3 cm long and 1.5-2 cm wide and are crowned by the persistent sepals. They are initially green or purplish in color and covered in numerous short projections (i.e. they are verrucose), but turn brown as they mature and may lose some or all of their tiny projections. They split open at maturity to release numerous smooth, black, rounded (i.e. spherical) or egg-shaped (i.e. ovoid) seeds. These seeds are relatively large about 5-8 mm long and 4-7 mm wide and are very hard. Normally seeds are initially white and when mature, black with chestnut brown spots are protected with a smooth coat. Fruiting occurs mainly during October.

Canna edulis (Indian shot) appears to have originated in the Andean region of South America. There is evidence of its cultivation on the Peruvian coast about 2500 BC (earlier than maize and cassava). In South America it now extends from the north, throughout the Amazon basin and as far south as northern Chile; in Central America and the West Indies it has become naturalized as a weed (occasionally cultivated), and it has been spread to parts of Australia, Polynesia and Africa. 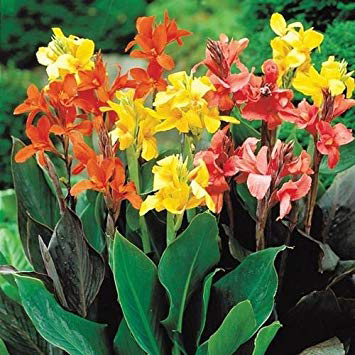 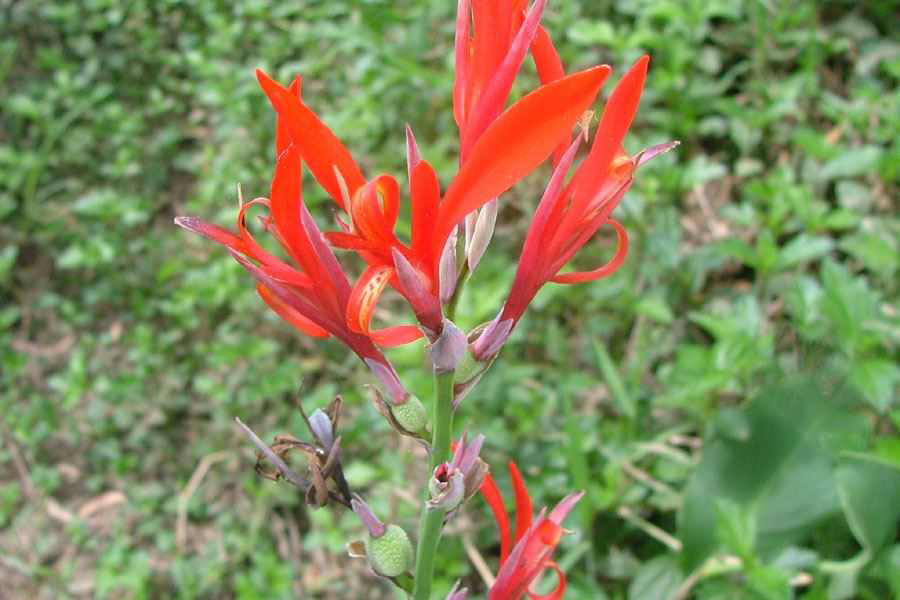 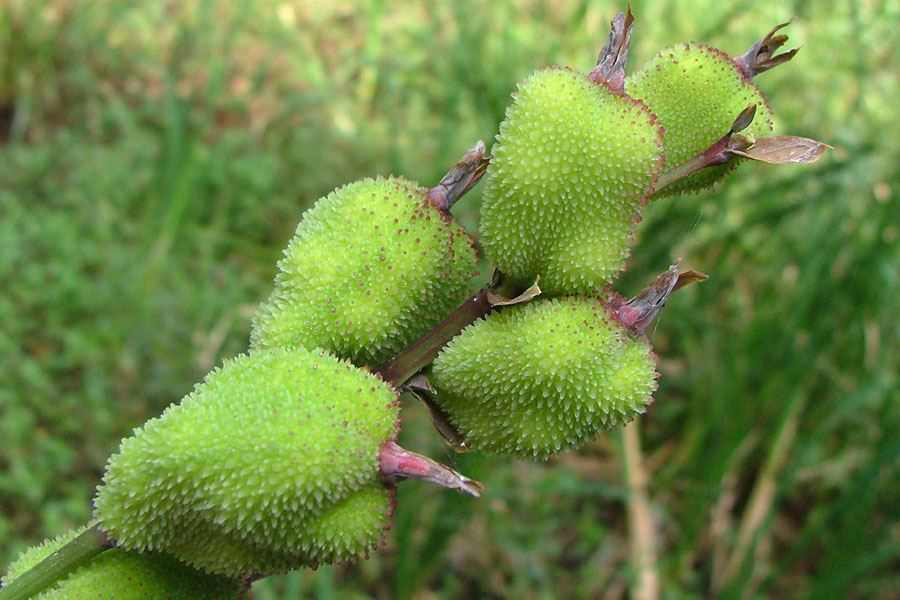 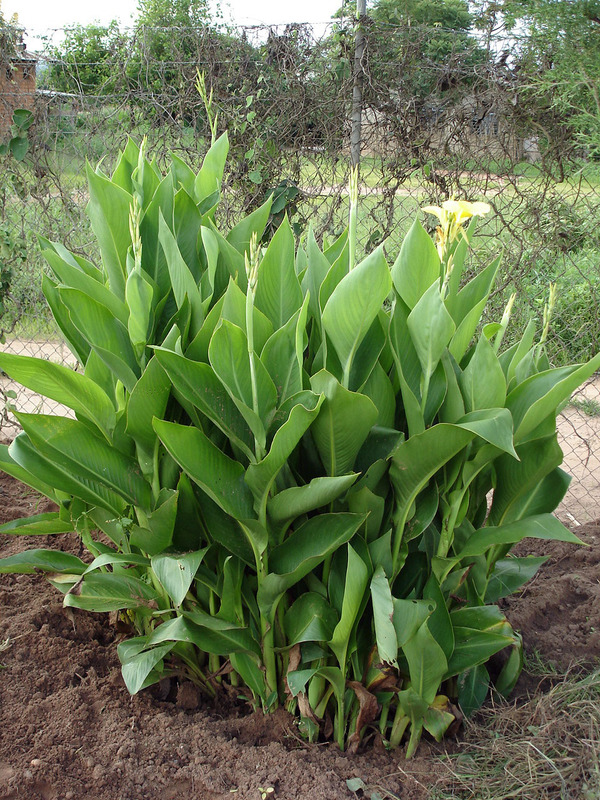 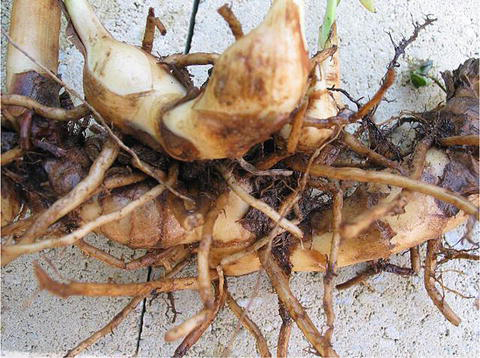 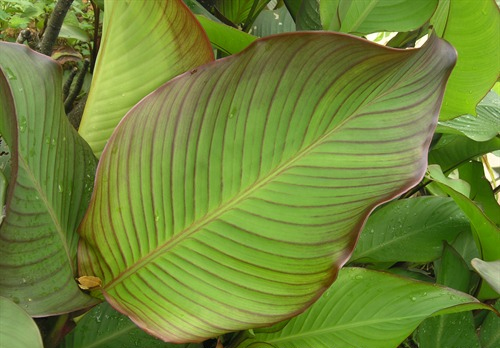 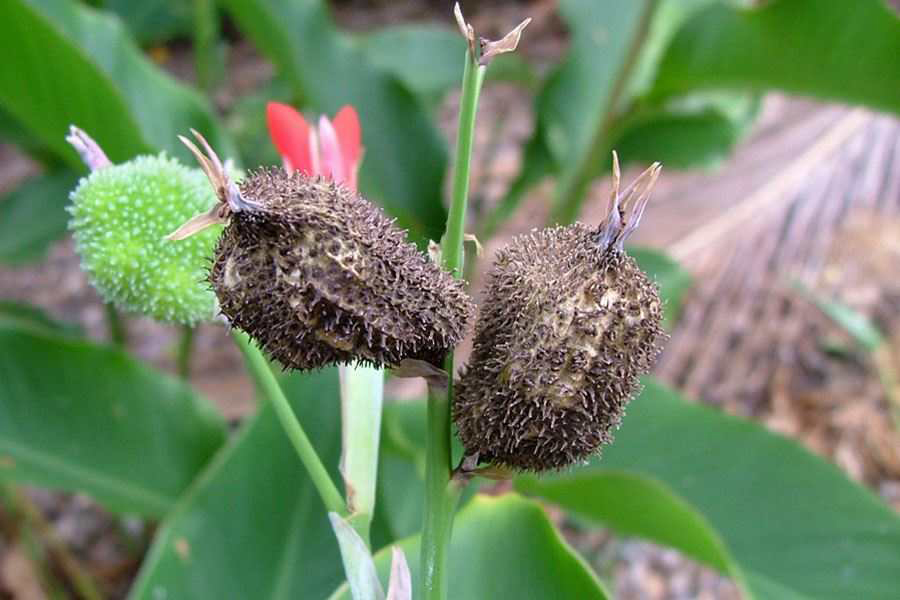 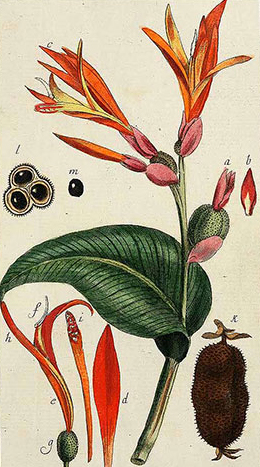 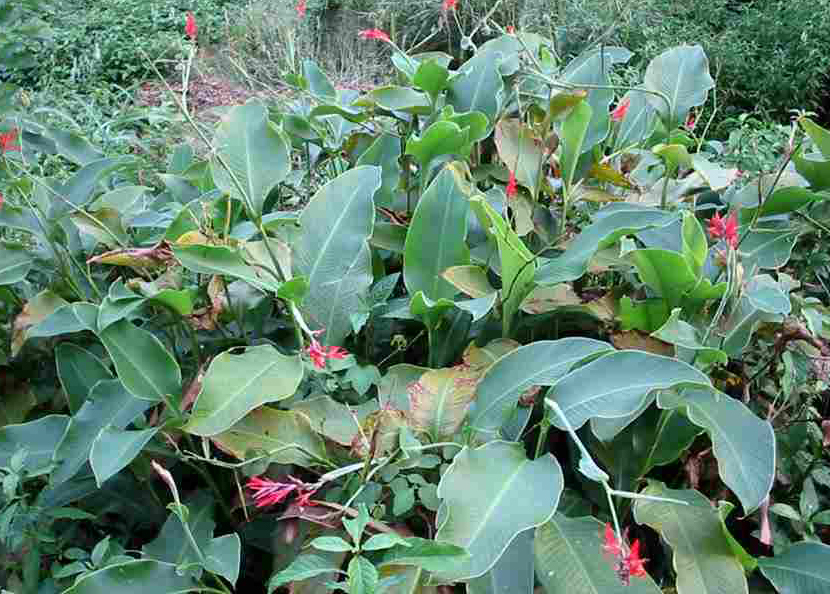 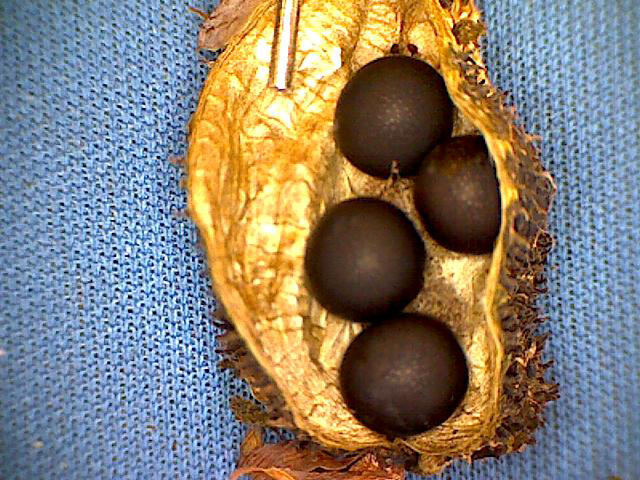 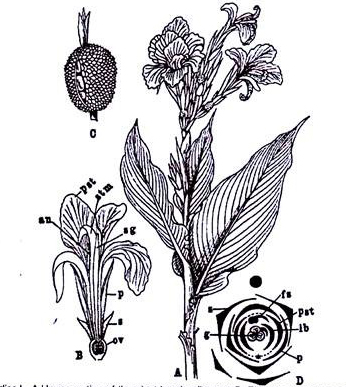 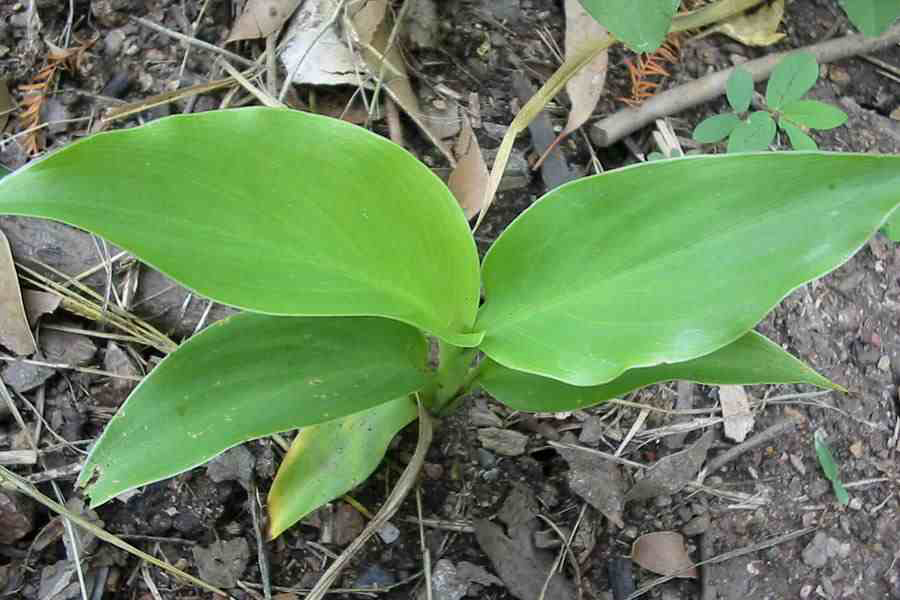 Moves are being made to alert the horticultural industry, particularly suppliers of ornamental plants via nurseries and seed catalogues, of the environmental risks posed by invasive plants. C. indica is one of the species now being brought to their attention as an invasive species in Australia and the USA.

C. indica is very difficult to control using physical or mechanical means, due to the presence of rhizomes, even a small fragment of which, if left in the soil, will regrow.

No attempts have been made at identifying potential bio-control agents, and most pests that attack C. indica are generalists, however, new, species-specific fungi Cercospora cannae and Puccinia cannacearum have been proposed from India, and which may merit further investigation.

No information is available on the use and efficacy of herbicides on C. indica.

Noting the local and commercial use of the rhizome as a food source, it would appear that C. indica is a suitable candidate for control by utilization, whereby at least the cost of control could be repaid by sales of the harvested plant parts.