Trending
You are at:Home»Herbs and Spices»Traditional uses and benefits of Water lettuce 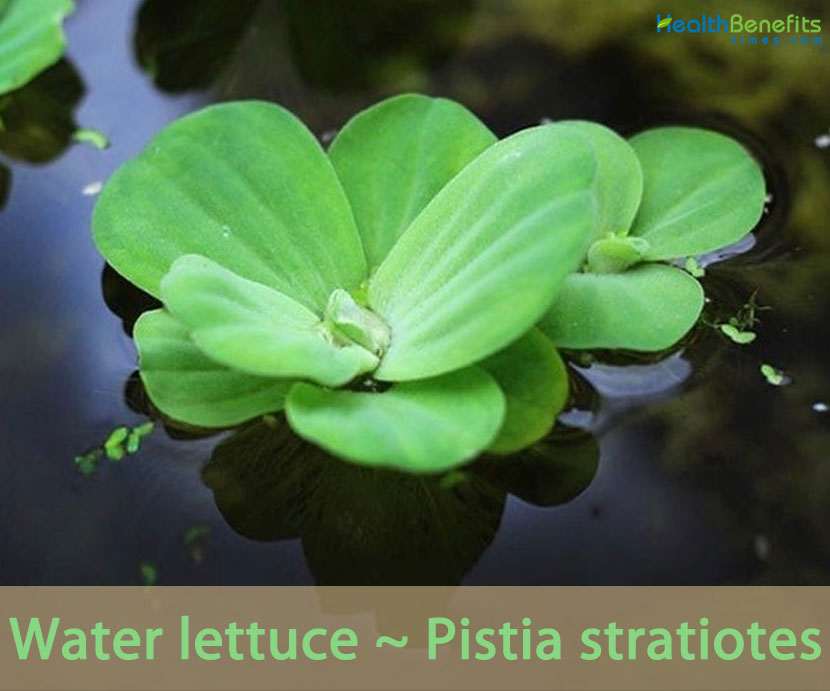 Pistia stratiotes, often called water cabbage, water lettuce or shellflower is a free floating, perennial plant belonging to Araceae (Arum family). It is the sole species of this genus. The plant is native to South and Central America, Africa and south-east Asia. It is also native to the Northern Territory in Australia. It is found in cooler climates, like Belgium, Czechia, France, Hungary, Italy, the Netherlands, Portugal, Romania, Russia, Slovenia, Spain, Ukraine, and parts of the United States. It was first discovered from the Nile near Lake Victoria in Africa. It is now present, either naturally or through human introduction, in nearly all tropical and subtropical fresh waterways and is considered an invasive species as well as a mosquito breeding habitat.  Few of the popular common names of the plant are water lettuce, Nile-cabbage, Shellflower, Tropical duckweed, Water-cabbage, Water bonnet, water lily, floating aroid, pistia and water fern.

The genus name is derived from the Greek word πιστός (pistos), meaning “water,” and refers to the aquatic nature of the plants. The specific epithet is also derived from a Greek word, στρατιώτης, meaning “soldier,” which references the sword-shaped leaves of some plants in the Stratiotes genus. It is commonly used as an ornamental plant in water gardens. The plant is occasionally used locally for food, but only usually where nothing better is available. It has a range of medicinal applications and is also used as a source of organic matter and to remove toxins from polluted water. It is occasionally grown as an ornamental in the tropics and as an indoor aquatic ornamental in temperate regions.

Water lettuce is a free-floating, frost-tender, aquatic herbaceous, perennial plant that normally reaches a diameter of around 30 cm (12 in) and a height of 10cm (4 in). It is commonly used as an ornamental plant in water garden. In tropical and sub-tropical climates it is a perennial. In temperate regions the plant behaves as an annual, returning after the winter months from submersed seeds. The plant is found growing in rivers, dams, irrigation canals, channels, slow-moving streams in tropical, sub-tropical and warmer temperate regions, drainage ditches, ponds, lakes, springs, surface flow wetlands, reservoirs, polluted water, nearly dried-out lagoons, mud at water’s edge, rice paddies and marshes along the edges of large tropical lakes.

Roots of this plant are free-floating, so soil is not necessary for healthy growth. The plant has many fibrous roots that are pendulous, measuring up to 50 cm long, with multiple perpendicular rootlets. Feathery roots dangle downward from the plants, providing a shelter for many small fish. As an ornamental plant, water lettuce provides attractive foliage that inhibits growth of algae and helps keep water clear. It is included on the Federal Noxious Weed List. It is also occasionally commonly called shell flower.

The floating rosettes produce runners (i.e. stolons) from the leaf bases (i.e. axils). These runners are up to 60 cm long and are green, rounded (i.e. terete), and quite hairy (i.e. pubescent). They give rise to new rosettes and then readily separate from the parent plant. Plants resemble small open heads of lettuce. New plants are formed at the ends of stolons radiating outward from the mother plant. Plants can spread rapidly to form dense mats of foliage (to 4” tall), and are considered to be noxious weeds in many tropical and sub-tropical areas where they can quickly cover a pond or lake from shore to shore.

The spongy leaves are pale yellowish-green or greyish-green in color. These leaves are 2.5-15 cm long and 2-8 cm wide and are fan-shaped or slightly spoon-shaped (i.e. spathulate) and have scalloped (i.e. crenated) margins. They have 6-15 prominent ribs (i.e. veins) on their undersides and are borne on very short leaf stalks (i.e. petioles). The upper surface is green and tomentose while the lower surface is paler and denser tomentum. These leaves are arranged in an overlapping fashion on a very short stem (i.e. they are densely alternately arranged into a rosette) and are covered in soft, white, velvety hairs (i.e. they are velvety pubescent). The hairs are water repellent and trap air, thus providing buoyancy to the plant.

The inconspicuous flowers lack petals and arranged on a short column-like flower clusters about 10-20 mm long arising in the leaf forks (i.e. axils). These flower clusters (i.e. spadices) have separate male and female flowers (i.e. the flowers are unisexual). A single female (i.e. pistillate) flower, consisting of an ovary and style, is found at the bottom and several (2-8) male (i.e. staminate) flowers, consisting of two stamens, are located at the top. At the base of the flower cluster is a whitish colored bract (i.e. spathe) that is 7-12 mm long and about 5 mm wide. There is also a cup-shaped membrane on the column, which separates the male and female flowers from each other. Flowering occurs mostly during summer and early autumn. 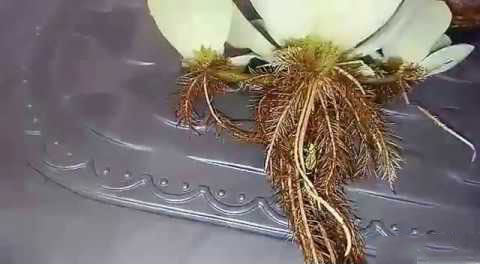 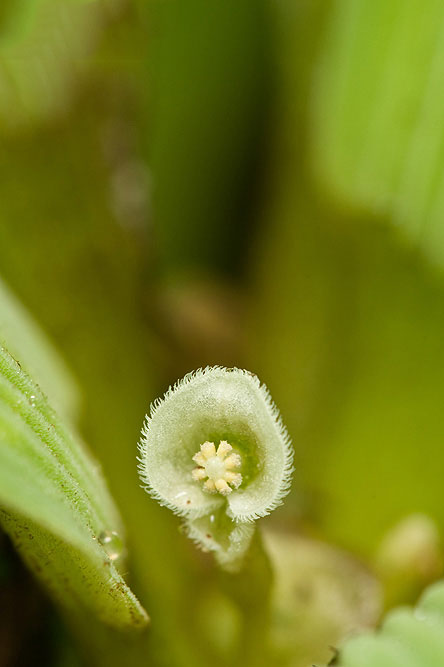 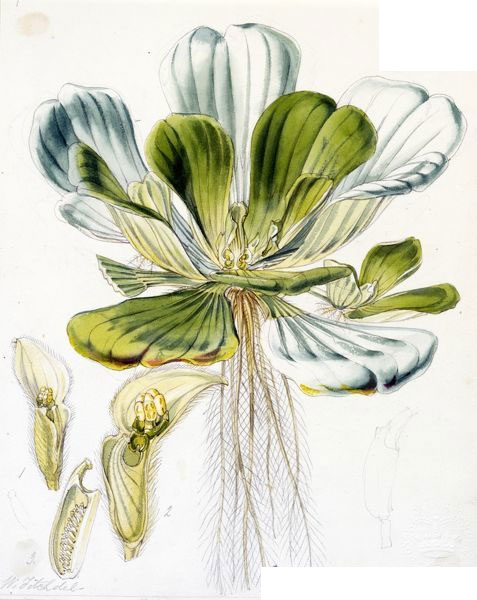 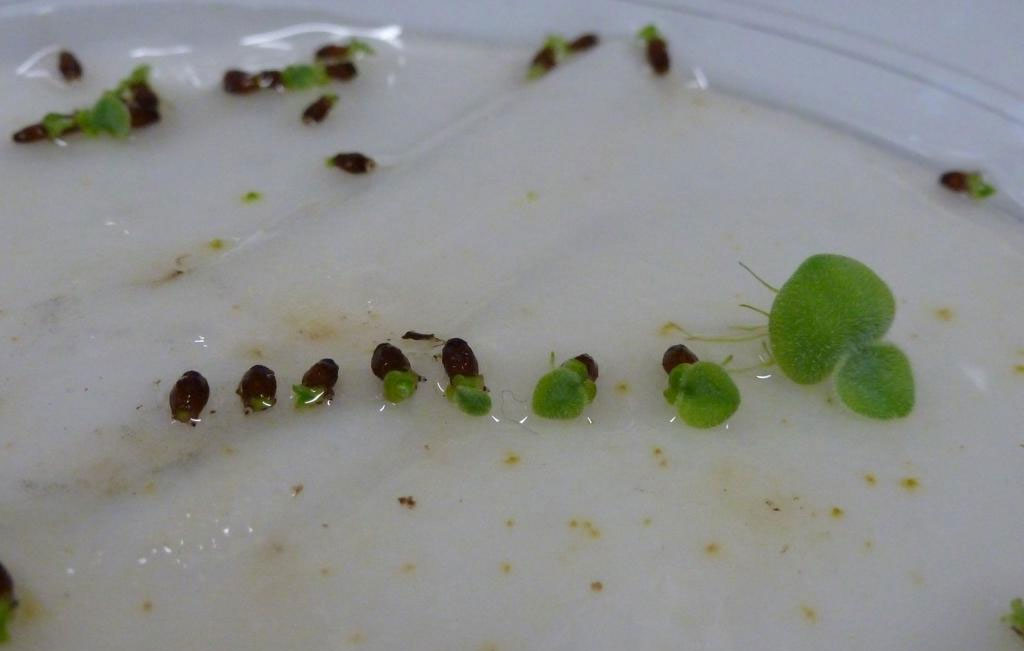 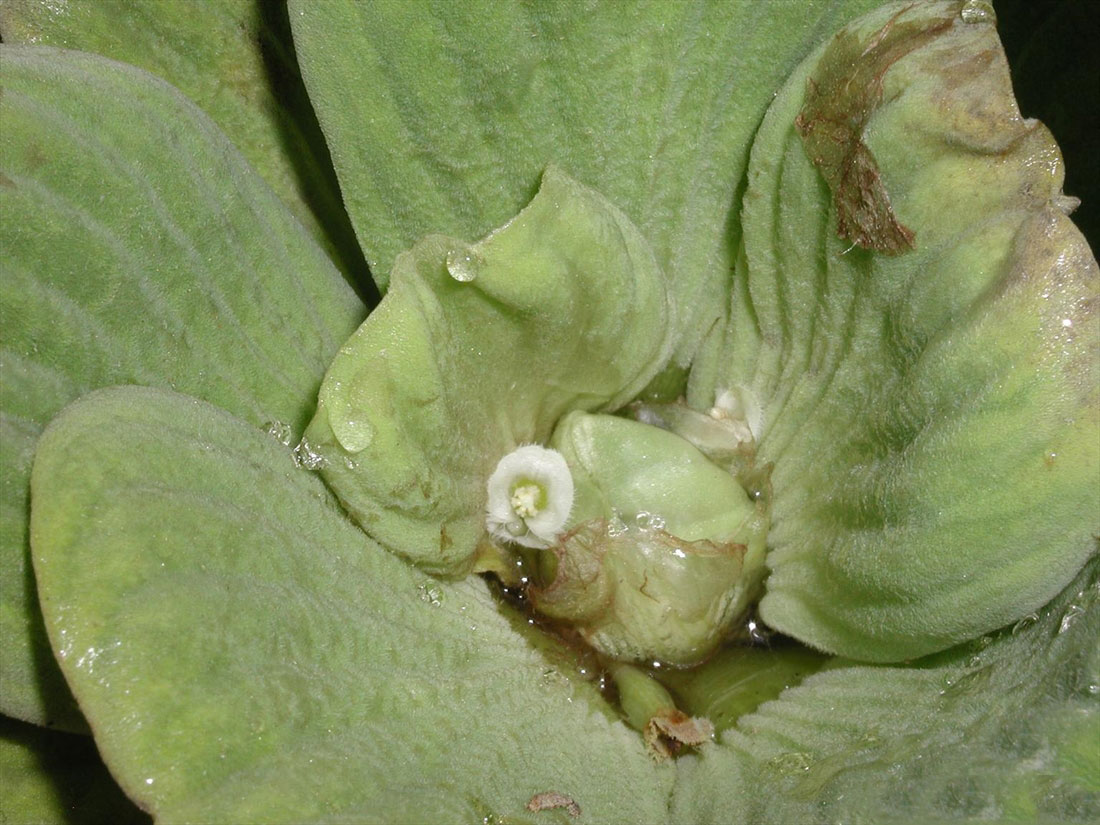 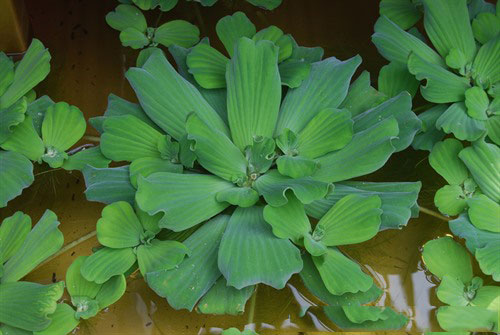 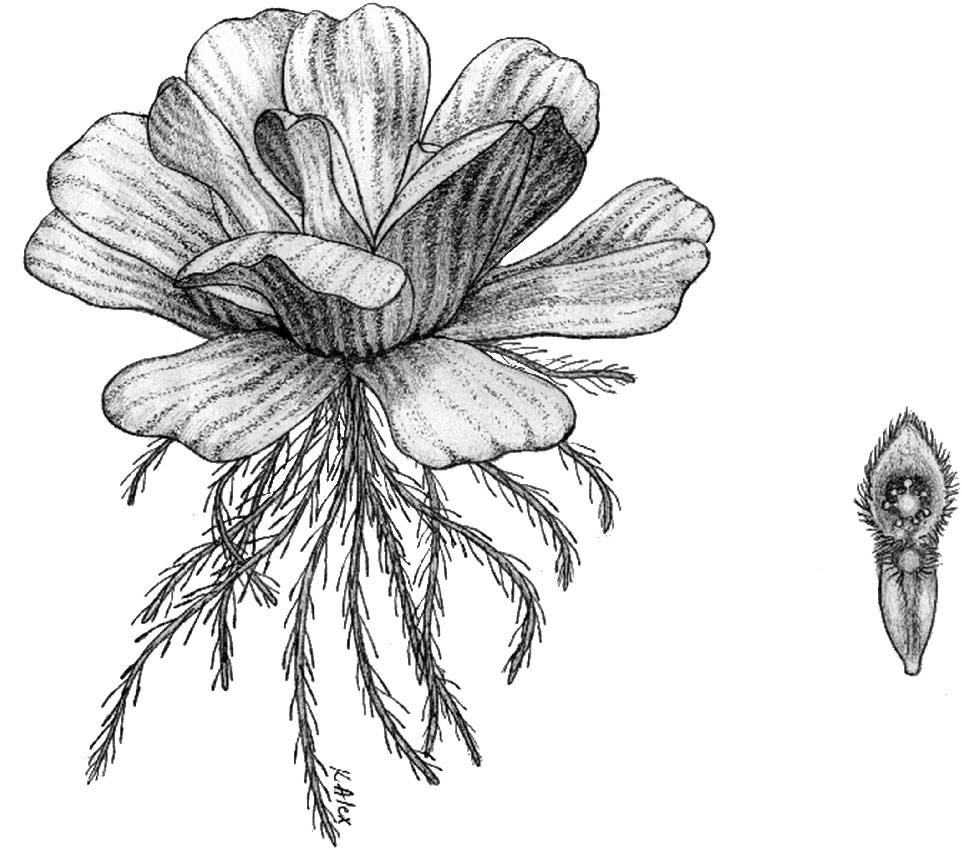 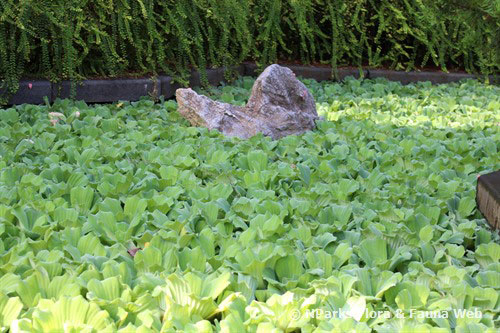 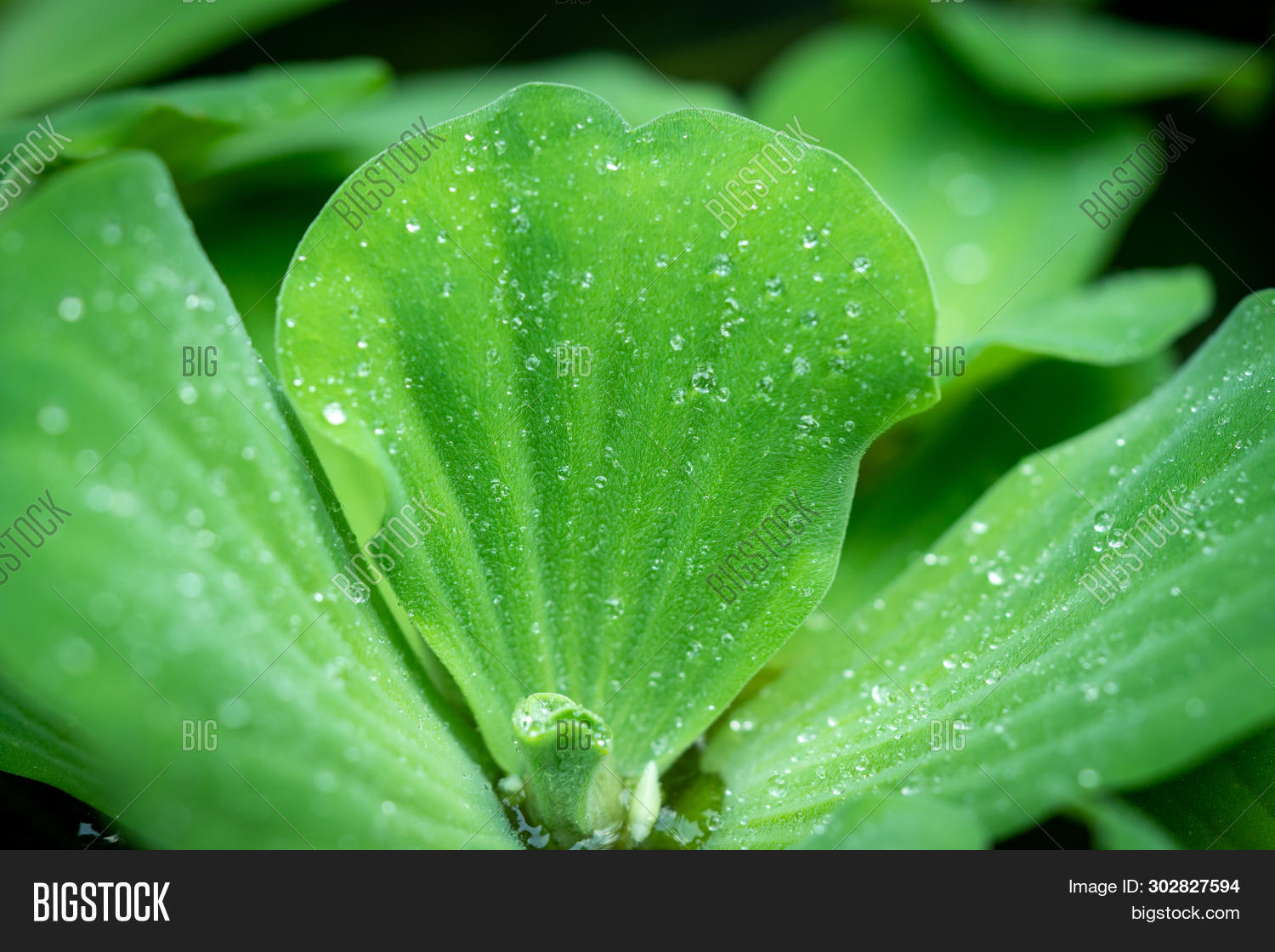 Fertile flowers are followed by egg-shaped (i.e. ovoid) or oval (i.e. ellipsoid) fruit are greenish colored berries that are 5-10 mm long and 3-6 mm wide, thin-walled, containing about 4 to 12 seeds. The mature seeds are light brown colored and about 2 mm long and 1 mm wide, ovoid or oblong in shape, have a wrinkled (i.e. rugose) surface, and contain a small air chamber. The plant undergoes asexual reproduction by propagating through stolons, yet evidence of sexual reproduction has also been observed in the ponds of Southern Brazil.

Listed below are few of the popular varieties of water lettuce

This variation has leaves that are wavier and does not grow as large or rapidly as other varieties. If you want to put water cabbage into a small container, this is a great choice.

This is a large variety of water lettuce that can reach the size of a dinner plate. This does not grow at the same speed at the more common varieties.

It is a form of water lettuce that stays small and can be difficult to find for your aquarium.

Water lettuce can propagate both sexually and asexually in the home aquarium, though sexually is extremely rare. However, water lettuce does pardon the pun, breed like rabbits, and you can soon be overrun.

The flower of the water lettuce is situated in the center of the plant with each individual only having male or female flowers. When successful fertilization takes place, a small many-seeded green berry will appear from which new plants will grow.

In this far more common form of propagation, the mother plant will develop smaller daughter plants that are attached to them by short stolons. Mother plants will develop plenty of daughters with little to no help from you.

Be cautious, however, of this kind of propagation as these mother and daughter plants can soon form thick matting over the aquarium’s entire surface. This can result in little or no light reaching any other plants you have in your aquarium, or even cause the suffocation of your fish.

Management of Pistia can be carried out by physical, chemical or biological control or by a combination of these methods (integrated control).

Physical removal of the plants can be done manually or by means of machines. Depending on the size and type of the infested water body different machines can be used. Weeds may be removed from irrigation and drainage canals using standard equipment such as mowing buckets attached to a tractor or a hydraulic excavator, as well as mowing launches. In general Pistia plants will grow in mixed vegetation with rooted plants and by using these machines the total aquatic vegetation will be removed. Special floating harvesters, which first collect the material and subsequently dump it on the shore, may be used in lakes and rivers. However, it should be taken into consideration that, in general, re-colonization of Pistia will occur. This implies that control measures should be part of a long-term maintenance program. Cost effectiveness of the control measures will depend on the losses brought about by Pistia infestation. This will be connected with the economic importance of the water body as well as the indirect effect on health of the local population via water-borne diseases.

Neohydronomus spp. is specialist feeders on P. stratiotes throughout its natural distribution in Central and South America. Confusion over the identity of the Neohydronomus sp. introduced into Australia for biological control was clarified by O’Brien and Wibmer (1989) who recognized three species. Very promising results have been obtained with the weevil Neohydronomus affinis (Hustache) which originated in South America. DeLoach et al. (1976) reported its specificity, and in 1982 it was released in Australia and subsequently in Botswana, Zimbabwe, Benin, Senegal, South Africa, Papua New Guinea and USA (see Harley et al., 1990; ECOWAS, 1995). The insect is well established in these countries, producing relatively high levels of control.

Spodoptera pectinicornis is reported to control P. stratiotes in Thailand and has been screened and recommended for introduction into Florida, USA. A three-pronged attack using the related weevils Argentinorhynchus bruchi, Argentinorhynchus breyeri and Argentinorhynchus squamosus have been successful in controlling the weed’s spread in lab tests in Argentina. Several species of fungus have also been evaluated; Ramularia spp. and Sclerotinia sclerotiorum have shown potential for controlling P. stratiotes populations. See Waterhouse (1994) and Dray and Center (2002) for further information on biocontrol of P. stratiotes.

Herbicides effective against Pistia include diquat, a combination of diquat and triclopyr, glyphosate, chlorsulfuron, terbutryn, 2, 4-D and endothall.

The application of herbicides in or near water bodies may have serious consequences for the environment. It may also endanger the health of local people if the water is used for drinking, bathing, swimming or washing. These possibilities have to be carefully assessed before the use of herbicides on any but a limited experimental basis. A special formulation of diuron known as AF101 has been recommended in Australia, as well as diquat.