Trending
You are at:Home»Facts»5 Things You Need to Know About Psoriasis 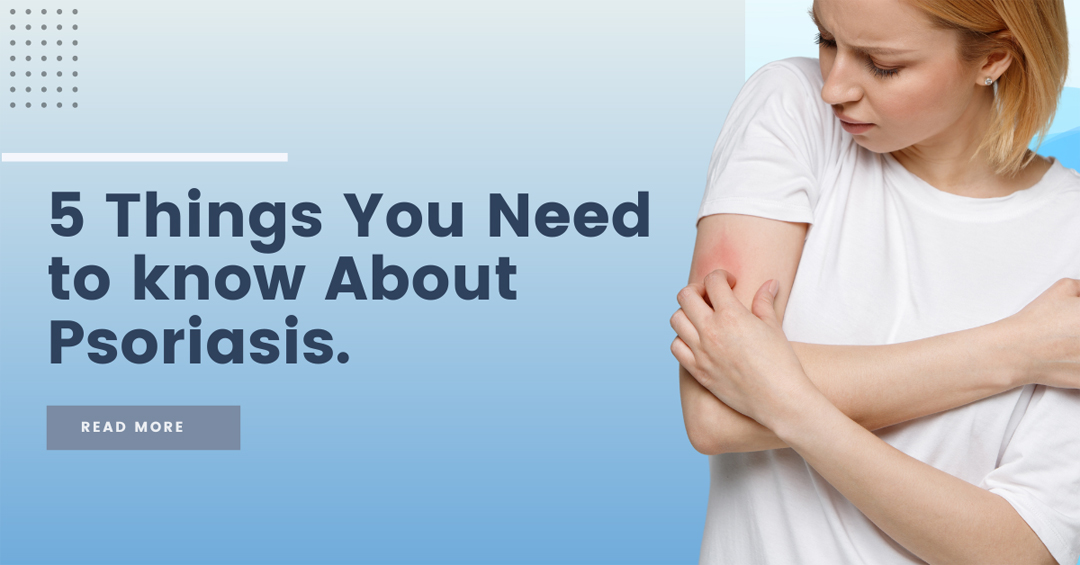 Psoriasis is a common skin condition that affects approximately a million people in the United States alone. It’s a chronic, long-term condition that can cause itching, redness, scaling, and skin inflammation. The good news is that there are treatments available to help manage psoriasis symptoms and there are some lifestyle changes you can make to reduce your risk of developing or exacerbating the condition. Let’s take a closer look at five things you need to know about psoriasis.

Psoriasis is a chronic skin condition that is thought to be an immune system problem. It is believed to be caused by the body’s own T-cells, infection-fighting cells, mistakenly attacking healthy skin cells. While it is not known exactly what causes this mistake, several environmental and genetic factors have been identified as potential triggers.

Common environmental triggers include stress, injuries to the skin (such as sunburn or cuts), infections, allergies, and some medications. Additionally, certain weather conditions (such as cold and dry air) can worsen psoriasis symptoms. Genetic factors, such as having a family history of psoriasis, may also increase one’s risk of developing the condition.

It has also been suggested that diet may influence psoriasis, particularly with regard to the consumption of gluten-containing foods; however, further research is needed in this area to determine if any dietary restriction would help reduce symptoms. In addition to these possible external factors, it appears that hormones can play a role in triggering psoriasis flares in some people – women often find their symptoms get worse during pregnancy or when taking oral contraceptives.

Finally, research suggests that psychological stress can exacerbate existing symptoms and cause flares of psoriasis in those who are susceptible. This could include anything from anxiety and depression to general life stressors such as work or relationship issues. Stress management techniques such as regular exercise and relaxation therapies may help reduce flare-ups associated with psychological stress levels.

Who Is At Risk for Developing Psoriasis?

While it can affect anyone regardless of age, gender or race, certain individuals may be at a higher risk for developing psoriasis. Those at increased risk include:

Overall, while anyone can get psoriasis regardless of age, gender or race there are certain individuals who may be at an increased risk for developing this condition.

What Are Some Common Symptoms?

Common symptoms of psoriasis include red, scaly patches on the skin with silver-white scales that may be itchy or painful. These can appear anywhere on the body, including the scalp and nails. Other common symptoms may include dry, cracked skin that may bleed and thick or pitted nails.

Psoriasis is not only an external condition but can also have internal impacts as well. Up to 30 percent of people who suffer from psoriasis will experience joint pain from a related condition called Psoriatic Arthritis (PsA). This form of arthritis causes inflammation in joints which can lead to stiffness and pain in areas like fingers, toes, spine, and knees. People suffering from PsA will typically experience flares that come with swelling and tenderness around affected joints.

In addition to physical symptoms, people living with psoriasis often experience emotional distress such as low self-esteem due to feeling embarrassed or ashamed about their condition caused by the social stigma associated with visible skin conditions like this one. Anxiety levels can increase while stress levels might flare up during times when plaques worsen making managing daily life more difficult than usual

How Is Psoriasis Diagnosed?

Psoriasis is typically diagnosed through a physical examination of the skin, nails, and scalp by a doctor. During the physical examination, the doctor will look for any signs of thickening or discoloration on the skin, as well as any patches with silver scales. The doctor may also take samples from the rash to test under a microscope in order to determine if it is psoriasis.

A blood test may also be performed to check for antibodies associated with psoriases – such as an antinuclear antibody (ANA) or rheumatoid factor (RF). A person’s medical history should also be discussed with the doctor in order to rule out other conditions that may have similar symptoms. A family history of psoriasis is also important information to discuss during diagnosis, as it can help indicate an increased risk of developing the condition.

In some cases, a combination of all these tests will be used in order to make an accurate diagnosis of psoriasis and distinguish between different types of this condition. If you think you have symptoms characteristic of psoriasis, it is important to speak with your doctor who can properly diagnose you and provide appropriate treatment options depending on your individual case.

What Treatments Are Available?

Treatment for psoriasis depends on the severity of your symptoms and how well you respond to treatment options. Topical treatments such as creams, ointments, or foams are usually prescribed first, followed by phototherapy if necessary. In some cases, oral or injectable medications may also be used.

Tremfya (Guselkumab) is an injectable medication that works by blocking a protein called interleukin-23 (IL-23). IL-23 plays an important role in the development of psoriasis by causing inflammation in the skin. By blocking this protein, Tremfya slows down the process of inflammation, helping to reduce redness and itching associated with psoriasis.

What Are the Benefits of Taking Tremfya?

The most significant benefit of taking Tremfya is that it can help you achieve clear skin quickly and effectively. Studies have shown that patients taking Tremfya saw an average reduction in their symptoms within 4 weeks of starting treatment. However, Before beginning treatment with Tremfya, make sure you speak to your doctor about any other medications or treatments you may be taking for your psoriasis.

You should also let your doctor know if you are pregnant or breastfeeding as these medications may not be safe for use during those times. Finally, since this medication needs to be injected directly into your skin, you should also make sure to follow all instructions carefully when administering it yourself at home. Knowing a trusted online pharmacy is also a must.

Knowing what causes it, who is at risk for getting it, what the symptoms look like, how it’s diagnosed, and what treatments are available are all important pieces of information to have if you believe you may have this condition and even if you don’t! By understanding these five pieces of information about psoriasis, you’ll be better prepared should it ever affect you or someone close to you down the line.