Trending
You are at:Home»Fruits»Health benefits of African Pear ~ Dacryodes edulis 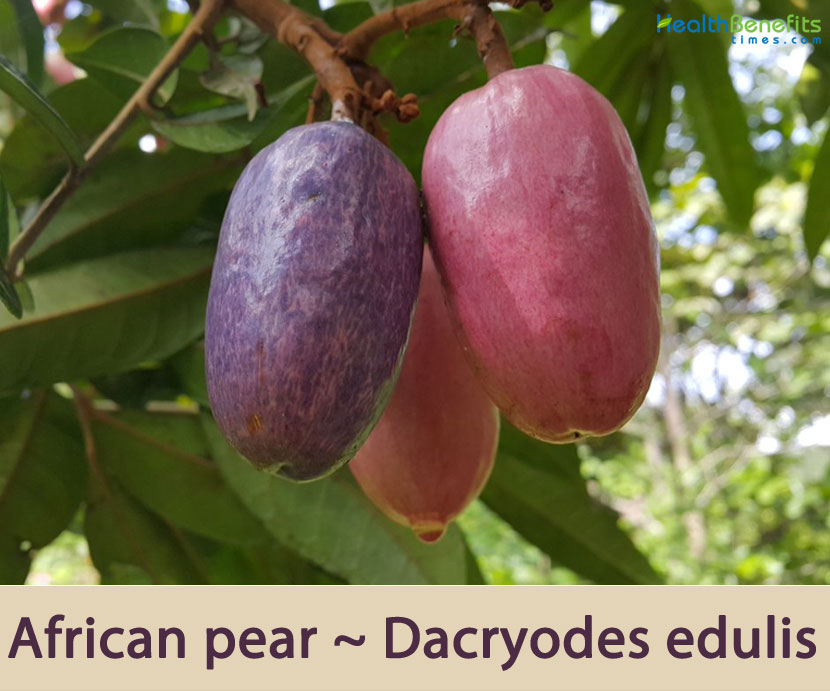 Dacryodes edulis commonly known as African pear, sometimes called safou, atanga and ube is a medium-sized, evergreen tree belonging to the Burseraceae  (Frankincense family) whose members are considered by an ovary of 2 to 5 cells, prominent as in ducts in the bark, wood and intra-staminal disk. The plant is native to Gulf of Guinea and extensively cultivated in other tropical parts of Central African countries. The natural range extends from Angola in the South, Nigeria and Sierra Leone in the West and Uganda in the East. It is also cultivated in Malaysia. Some of the popular common names of the plant are Bush Butter Tree, Butterfruit, African Plum, bush pear, bush plum, safou, Native pear, African pear, Ajong, Elemi, Ube mbu, Safu, African pear tree, Bush butter, Bush fruit tree, Eben tree, atanga, ube and nsafu.

African pear is a dioecious, medium-sized, shade loving, evergreen tree that normally grows about 18-40 m but not more than 12 m in plantations and 50-170 cm in diameter. It is generally branched from low down, with a deep, dense crown. The bole is rather short, slightly fluted, 50-170 cm in diameter and more or less sinuous. The scented bark is yellowish- grey to grey, often shallowly scaly and with lenticels and horizontal folds, slash brownish-pink, exuding drops of translucent-whitish, aromatic resin. Buttresses are absent. The plant is found growing in swamp forest, evergreen forest, and gallery forest and on swampy ground, shady, humid tropical forest.

Leaves are alternate, compound, and imparipinnate, with 5-8 pairs of leaflets. They are glossy and pubescent, the pubescence disappearing with age. They are oblong-lanceolate or ovate-lanceolate, up to 20 -30 cm long and 6 -8 cm wide, broadly cunaete to rounded and asymmetric at base. They are acuminate at apex and margin is entire and glabrescent. Petiole is up to 7.5 cm long. The upper surface of the leaves is glossy.

Flowers are unisexual, subtended, 3 lobed and conspicuous with caducous low bract. Flowers are fragrant, about 5 mm across and are trimerous except for the ovary. They are arranged in dense, ferruginous, stellate-tomentose inflorescence. Sepals and petals are 3, the former showing brown color and the latter, cream color. Stamens are 6 and are slightly shorter than petals. Disc is also 6 but lobed, surrounding the two-celled, glabrous ovary. Styles are very short and stigma is 2-4 lobed. Inflorescence axis is 10-42 cm long or may be longer and deeply grooved. Flowering normally takes place in between January to April.

Fruits are ellipsoid drupe and vary in size, 4-12 cm long and 3-6 cm wide, resembling olives. The exocarp is thin and pink ripening to form blue-green, purple or brilliant black. The fruits are one-seeded, with pulpy pericarp, about 5 mm thick and thin, cartilaginous endocarp. Seeds are oblong-ellipsoid, up to 5.5 cm long. The cotyledons are very much thickened and deeply folded or conduplicate, appearing palmately lobed. The tree flowers at the beginning of the rainy season and bears fruits during 2 to 5 months after flowering. 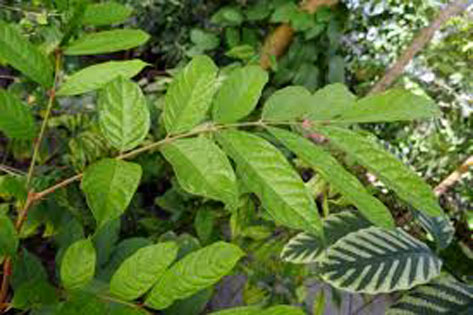 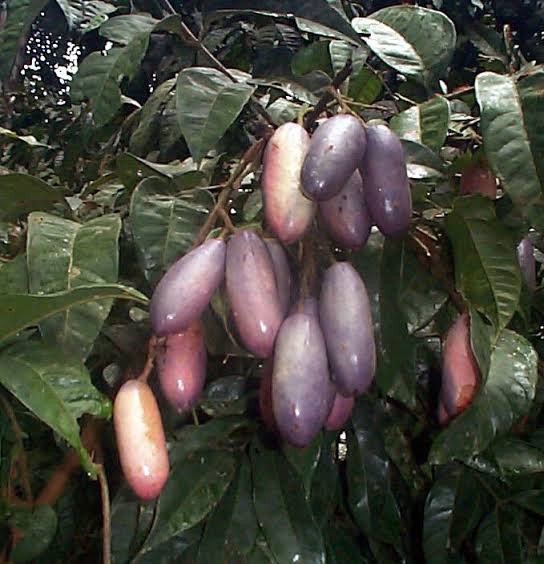 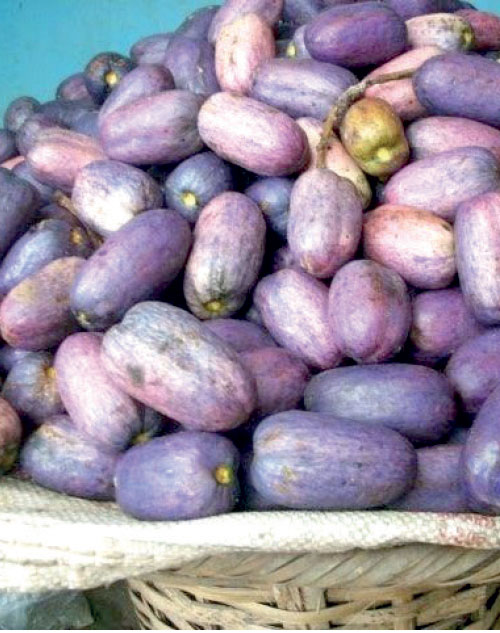 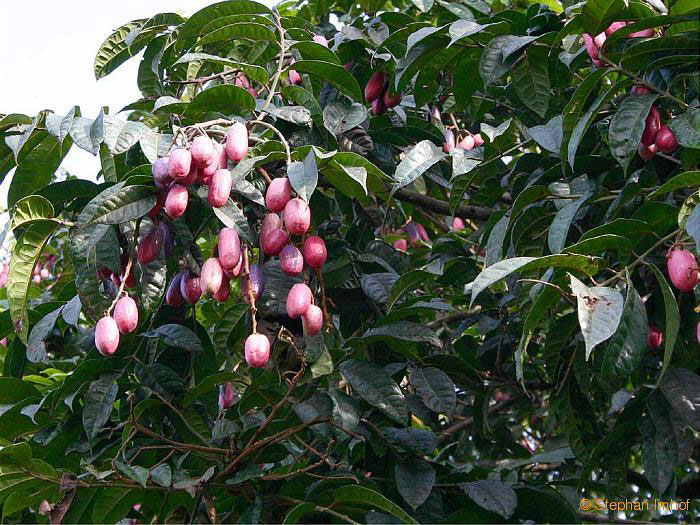 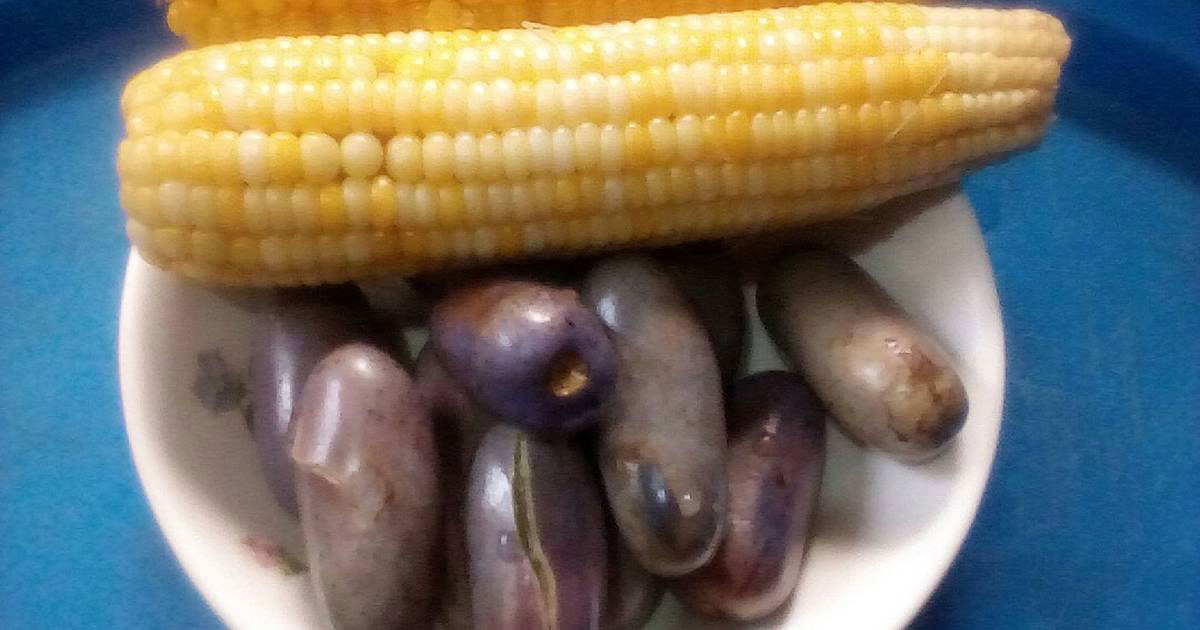 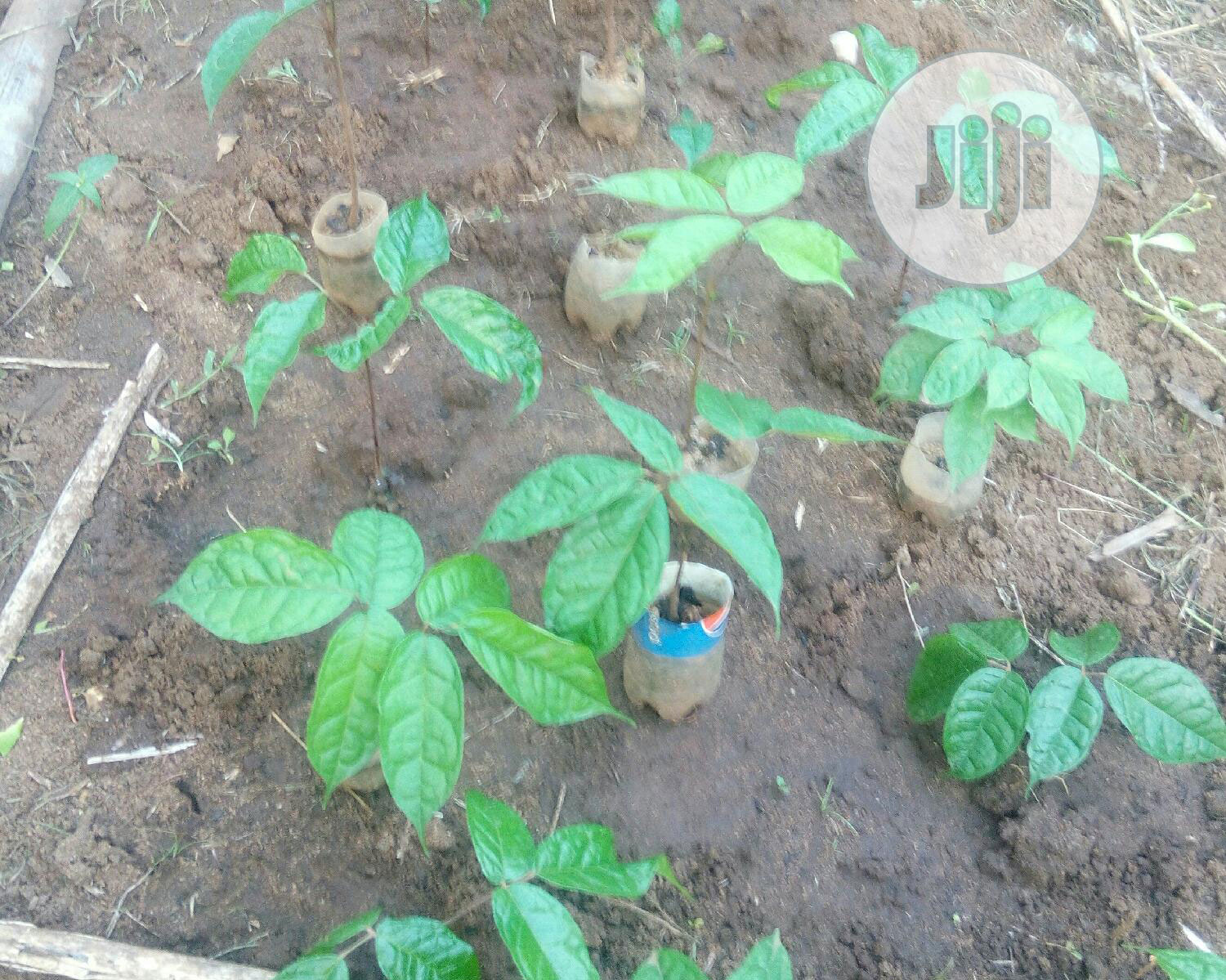 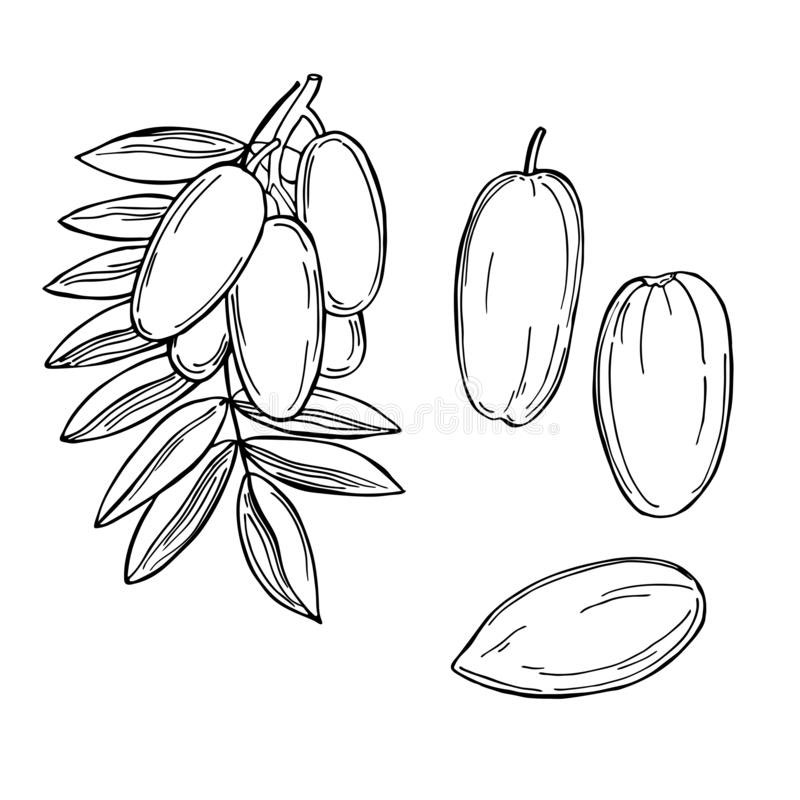 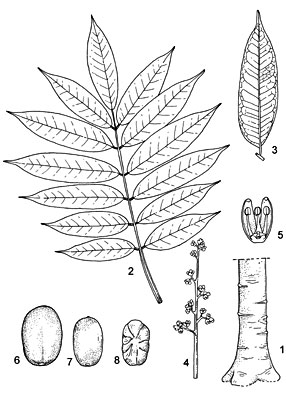 As explained before, African pear consists of the fiber in it. In this case, fiber has Pectin that helps to control diarrhea and binds substance in the intestine. Thus, you can count on African pear to help you dealing with diarrhea for sure.

Surprisingly, African pear can give the health benefits to prevent cancer. This is due to the presence of antioxidants that help to fight free radicals and diseases in the human body. At this point, it is recommended to eat antioxidant foods such as fruits and vegetables to have the healthier body and preventing cancer as well.

As We all know that diabetes is a chronic disease. To deal with this, we need a right treatment and prevention. In this case, diabetes has vitamins and minerals that play important roles in controlling the blood sugar level. Not only for that, but the low glycemic index carbohydrate in it also helps to digest and metabolize the body and lower the blood glucose levels.

Due to the presence of calcium and phosphorus in African pear, then it will be beneficial to promote healthy teeth and bones. Indeed, these minerals play a major role in maintaining bone health, muscle contraction immune system and blood clotting. Thus, make sure you consume dairy foods and African pear to have such strong bones and teeth.

Consuming African pear helps to lower the high blood pressure. It is due to the presence of potassium in it. This will be resulting in the lowering level of blood pressure. As the consequence, it can encourage heart health and prevent the risks of stroke. To get this benefit, you can eat 5 portions of fruit per day.

African pear helps in promoting the skin health. This is due to the presence of antioxidants and vitamin C and riboflavin to keep the skin glowing. Not only for that, it is rich in oil that can treat skin diseases such as ringworm, craw-craw, and related others.

Nigerian pear consists of a great amount of antimicrobial properties, and for this reason, it is being used in making toothpaste in certain parts of Africa. Multiple local studies reveal that these potent properties also play a major role in combating the bacteria, which often causes mouth odor and tooth decay.

Therefore, if you are looking for a natural way to handle either of the two mouth conditions, it is suggested you increase your pear fruit intake to quicken the recovery.

Bush pears help to improve immunity due to the presence of vitamin C which helps the immune system to resist certain diseases and also maintain a healthy immunity. Immune boosting property in African bush pear comes from vitamin C and essential minerals that act as antioxidants that help to strengthen immunity and improve the infection-fighting ability of the immune systems.

Soluble fiber content on bush pear is a good property that gives it the ability to reduce constipation, aid to a normal bowel movement. This fiber consists of pectin, cellulose, and lignin that resist the action of the digestive enzyme. Pectin helps to control diarrhea and binds substance in the intestine.

Studies have shown that regular consumption of this fruit slows the risk of macular degeneration in aged people. African pears exhibit strong antioxidants properties that help to prevent some age-related illness which causes poor vision.

You may be surprised to hear that African pear is a pregnancy super fruit. It consists of natural folic acid which is considered good in pregnancy. The presence of folic acid in African pears helps to prevent deficiencies in baby’s brain and spinal cord. African pear is rich in sugars, carbohydrates, fiber, foliate, pantothenate and vitamins such as vitamin B6, thiamine, niacin, riboflavin, the antioxidant vitamin (vitamin C) which helps to fight the free radicals in the body.

The benefit of African pear to lose weight is related to the nutrient called as soluble fiber. The fiber makes stomach feel full and it prevents you to eat more foods that can lead to lose weight. Since then, the fruit is good for weight loss but for the best result, it is better to do diet treatment as recommendation from the doctor.

African pear consists of good amount of Vitamin C and it has been believed to increase mood. It encourages the production of neurotransmitters like norepinephrine, which gives a great impact to the mood of the person. In addition, it also has the benefit for the function of brain.

Some people may not concern about the benefit of African pear to relieve pain. It can speed up the process of recovery of injuries or wounds. The benefit comes along with vitamin C and linked with the boosting of immune system.

Eye problem such as cataract can be treated with African pear. It is because the condition commonly happens when the lens of human eye is having less of vitamin C.

The main use of D. edulis is its fruit, which can be eaten raw, cooked in salt water or roasted. Cooked flesh of the fruit has a texture similar to butter. Pulp consists of 48% oil and a plantation can produce 7-8 tons of oil per hectare. Fat content of this fruit is much higher compared to fruits such as apple, guava, and pawpaw. It is also rich in vitamins. The kernel can be used as fodder for sheep or goats. The flowers are useful in apiculture.

Wood of D. edulis is elastic, greyish-white to pinkish. The wood has general use for tool handles, and occasionally for mortars, and is suitable for carpentry.

Seed of Dacryodes edulis is rich in different proportion of carbohydrates, proteins, and crude fibers, appreciable amounts of potassium, calcium, magnesium and phosphorus. It is also rich in essential amino acids such as Lysine, Phenylalanine, Leucine, and Isoleucine. It consists of a considerable amount of fatty acids such as palmitic acids, oleic acids, and linoleic acids. Physicochemical analysis suggested that the seed have valuable functional attributes of industrial interest. The important natural product, gallic acid, is found in significant quantity in the seed of Dacryodes edulis. The vaso-modulatory properties of the seeds have been reported.