Trending
You are at:Home»Herbs and Spices»Health benefits of Tahitian Chestnuts 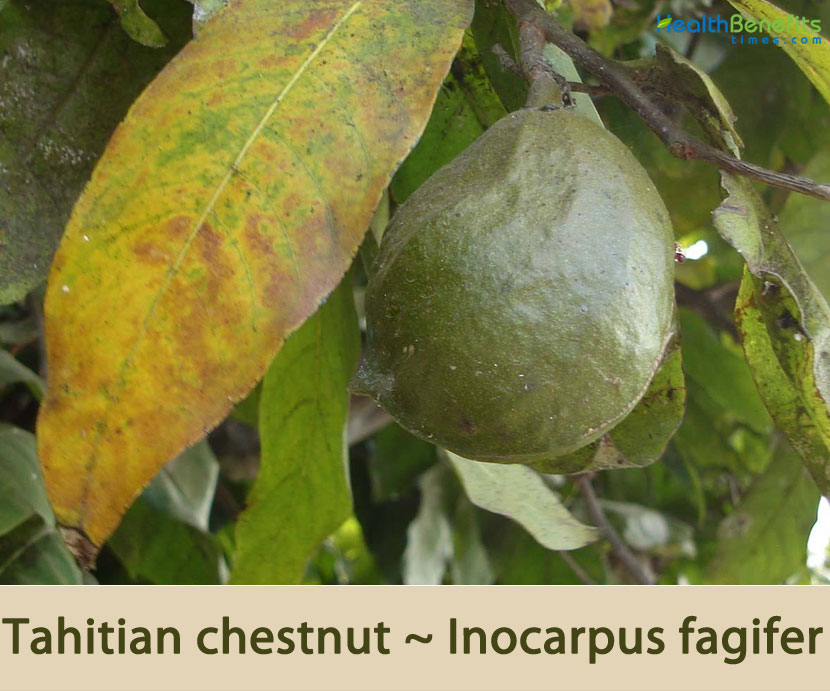 Inocarpus fagifer, commonly known as the Tahitian chestnut, Polynesian chestnut, is a species of flowering plant in the subfamily Faboideae of the legume family, Fabaceae. The plant is native to Indo-Malaysia and is naturalized after ancient aboriginal introduction in Micronesia, Melanesia and Polynesia (extending to the Marquesas). It is cultivated in the Pacific islands as well as in New Guinea, Indonesia, especially Java and Sulawesi, the Philippines and occasionally in the neotropics. It is the only edible and culturally important member of the genus Inocarpus. It is popularly known as Tahiti Chestnut, Polynesian Chestnut, Otaheite Chestnut, Ailali, Arau, Booi, Dola, Dulafa, Gatet, Gayam, Gnuilaba, Julapa, Kayam, Keam, Kurak, Mabe, Mape, Marap, Marare, Marau, Mwaqe, Mworopw, Namambe, Naqi, Nokomo, Tolok and Zulapa.

Tahitian chestnut is a medium size, leguminous, evergreen tropical tree that normally grows about 20 m (66 ft.) in height, though it can reach heights of 30 meters or more with short, thick, irregular, and very fluted bole of up to 7 – 90 cm (3–35 in) in diameter. The plant is found growing in coastal forests, margins of swampy places, along rivers, dry forest, lowland secondary forest, stream banks, swamps and marshes, mangrove areas, and coconut plantations, home gardens, lowland seaside forest, waterlogged areas, and highly alkaline soils along shorelines. The plant tolerates a wide range of soils from mildly acidic to very alkaline or saline coastal soils, from free draining soils to impeded drainage as well as seasonally waterlogged or even continually waterlogged soils. It tolerates soils of low to medium fertility, and can grow in a wide pH range of 5 mildly acid to pH 14 strongly alkaline soils. It has medium to high tolerance of steady and strong winds and is wind firm due to a strong lateral root system including buttresses. The plant has shallow taproot and well-formed network of lateral roots. The bark is rough and flaky and varies from brown to grayish. The grayish color is more common in older trees. Other bark characteristics appear relatively constant with age.

The flowers are fragrant and clustered along a short rachis found at the apex of branches, stems, and twigs. They are about 1 cm (0.4 in) long and have five petals that vary from white to cream to pale yellowish. Trees begin flowering at an age of 3–5 years. Flowering is seasonal and in most cases usually taking place in November–December, with fruiting in January–February of the following year, though this varies through the trees range and from year to year. A similar pattern is found in PNG and Vanuatu.

The tree starts bearing fruit at about eight years old.  Fruits are irregularly ovoid, slightly flattened, and rounded or oblong with a flange down one end. They are produced either singly or in clusters. Fruits weigh nearly 50–110 g (1.8–3.9 oz.) and measure 46–130 mm (1.8–5.1 in) in length, 34–120 mm (1.3–4.7 in) in width, and 40 mm (1.6 in) in thickness. The skin is smooth and covers a fibrous shell encasing the kernel. Young fruits usually are green, but as they ripen the color usually changes from green to orange-brown. However, in some types the fruits remain green even when ripe. At maturity the fruits are usually indehiscent, although there are some dehiscent types. The division of the shell is visible when the mesocarp is removed. Tahitian chestnut generally fruits once a year. In Vanuatu fruits reach maturity between January and April.

The  white,  kidney-shaped seed or  kernel  is  contained  in a  fibrous, brownish, relatively  thin about  2–3  mm (0.08 in) thick shell. Seeds are large, each weighing 5–50 g (0.2–1.8 oz.), and measuring 20–70 mm (0.7–2.8 in) long and 16–40 mm (0.6–1.4 in) wide. The kernel is edible when cooked but is highly perishable and has a short shelf life. It rapidly changes color from white to reddish brown after being extracted from the shell. The fleshy mesocarp, or pulp, is eaten by flying foxes and cockatoos. These animals bite off fruits and fly with them to other trees, dispersing the seeds. The kerel (seed) must remain encased inside the shell to be viable. 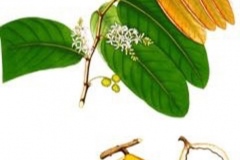 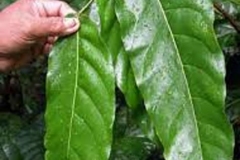 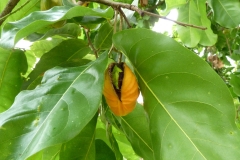 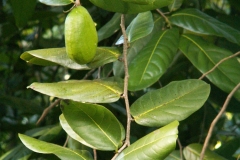 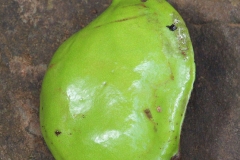 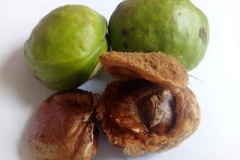 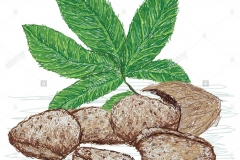 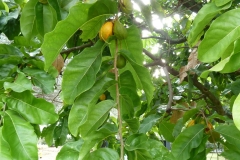 Tahitian chestnut has many benefits for human life. Not only for health but also beneficial for the economic field of society. Here’s the review for you:

To treat diarrhea, leaves of plant is required. Simply cut small pieces of the leaves, and then boil until boiling. Drink boiled water to treat diarrhea. This method is considered a natural way that has been used by ancient society.

Tahitian chestnut fruit consists of flavonoids hepatica which is one source of antioxidants. Antioxidants are necessary for the body to fight free radicals that can cause numerous diseases.

Tahiti chestnut fruit consists of good amount of vitamin C that can help treat canker sores. If you are suffering from canker sores, there is nothing wrong you consume this fruit in a natural way.

Tannins present in this fruit can help the process of food absorption. Optimal absorption of food will affect the health of the body because the organs get the nutritional intake.

The  tree  is  a  good  candidate  species  for  inclusion  in home gardens,  mostly  as  a  boundary  line  species  for shade, windbreak, and a companion crop.

The tree is highly suitable, mainly for a rural pig fence at early stages of growth. The buttresses can be chipped off to accommodate the fencing.

The tree is rated moderately suitable for fence posts because it is fairly durable as poles (10–15 cm [4–6 in] diameter). As sawn timber it may be more susceptible to termites.

It makes a good boundary marker, although was less common traditionally than cut nut and canarium nut.

The tree is a good medium-height tree for windbreaks because it tolerates strong winds and resists breakage.

The tree provides a good wildlife habitat for some nesting bird species. It also provides habitat for red ants that are a biological control of Amplypelta co-cophaga, a major pest of cocoa in the Solomon Islands.

The fallen kernels and monocarps are food to some fresh-water fish and prawns and possibly can be useful in fish farming.

It was found in Choiseul, Solomon Islands, to provide very good coastal protection, particularly for slowing down the shoreline erosion created by rise in tides. This has been observed, for example, along beaches and shorelines in Choi-seul and the Kolombangara Islands.

Tahitian chestnut is an attractive evergreen tree with potential for use in urban centers for beautification while also providing shade and shelter. It is planted and protected in rural villages for such functions as well.

The wood is of moderate quality and reported to be used for flooring in Temotu, Solomon Islands.  Treating the wood with appropriate preservatives may provide protection against wood borers and increase its suitability for light construction purposes.

The wood is used for carvings and tool handles in Fiji, the Solomon Islands, Vanuatu, and Tonga. The buttress is used in the Reef Islands (Solomon Islands) as a platform for dancing; when placed over a hole it provides a resounding tone

The wood is used for making canoes in Rennell and Bellona, the Solomon Islands. In Wallis, the leaves were sewn together to make sails for boats.

Large leaves were traditionally used for wrapping and parceling throughout the Pacific islands.  In Fiji, cooked kernels were wrapped with the leaves when sold in the market. In Tonga, the leaves were used for making belts.

In Tonga, the leaves were once used to cover the ground beneath mats