Trending
You are at:Home»Herbs and Spices»Health benefits of Marigold – Tagetes erecta 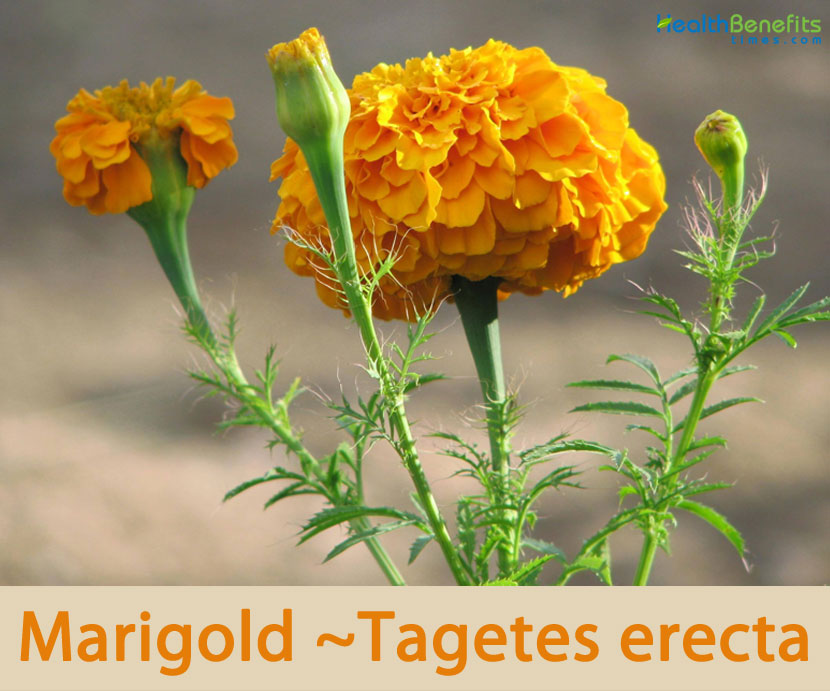 Marigold scientifically known as Tagetes erecta L. is an herbaceous plant belonging to Aster family (Asteraceae ⁄ Compositae), cultivated commercially for its yellow flowers, both as an ornamental plant and as a source of feed pigments and food coloring additives. The plant is native to Central America, Mexico and Guatemala. It has been intentionally introduced across tropical, subtropical and temperate regions of the world and now it can be found cultivated and naturalized in North and South America, the Caribbean, Africa, Asia, Europe and Oceania. They are also found in the countries of Central America and the Caribbean: Belize, Bolivia, Colombia, Costa Rica, Cuba, Ecuador, El Salvador, Guatemala, Guyana, Honduras, Jamaica, Nicaragua, Panama, Puerto Rico, and Venezuela. Similarly, in Mexico, it is found in the wild in the states of San Luis Potosí, Chiapas, State of México, Puebla, Sinaloa, Tlaxcala and Veracruz. It became naturalized also elsewhere in the tropics and subtropics and is widely cultivated globally as a popular garden ornamental. It is cultivated commercially for its dye mainly in Latin America, in Africa on a small scale in Zambia and South Africa.

African Marigold, American Marigold, Aztec Marigold, Big Marigold, Marigold, Mexican Marigold, Saffron Marigold, French marigold, Big marigold, Marigold, Mary Bud, Gold Bloom, Pot Marigold and Ruddes are some of the well-known common names of the plant. Some authorities regard Tagetes patula (the French marigold) as a synonym of Tagetes erecta. The name Tagetes is from the name of the Etruscan Tages, born from the plowing of the earth. It likely refers to the ease with which plants of this genus come out each year either by the seeds produced in the previous year, or by the stems which regrow from the stump already in place. Specific epithet means erect or upright. The common name in English, marigold, is derived from Mary’s gold, a name first applied to a similar plant native to Europe, Calendula officinalis. The Aztecs gathered the wild plant as well as cultivating it for medicinal, ceremonial and decorative purposes. It is extensively cultivated commercially with many cultivars in use as ornamental plants, and for the cut-flower trade. Marigold is very popular flowers commonly cultivated in India and other countries.

Opposite leaves at the bottom are alternate at the top, up to 20 cm long, pinnate, composed of 11 to 17 leaflets. Leaflets are lanceolate to linear-lanceolate, up to 5 cm long and 1.5 cm wide, acute to acuminate, serrated to sub-holders. The lower ones of each leaf are frequently setiform (in the form of threads); the superiors are sometimes completely setiform; with abundant round glands. The margin is dentate and the leaf blade length is less than 2 inches and color of leaf is green. Foliage and flowers are aromatic when brushed or crushed.

Flower-heads are borne singly, on stalks 3-10 cm. Flowers are usually yellow, orange, red and maroon in color. Each flower consists of large number of petals that overlap. Biggest petals are located on a periphery and smallest in a center of a flower. Flowers contain both male (stamen) and female (pistil) reproductive organs. Flowering normally takes place in between May until October.

The history of Marigold begins with the Aztecs in Mexico, where these flowering plants were used as herbal medicine and in religious ceremonies. Later, the plant was taken to Spain, where the seeds were traded through Europe. It became popular in the churches in Spain and the name changed to Marigold. By the early 1900s, the importance of marigold flower increased when it became a part of the Burpee seed catalog after the company funded research on the plant and introduced new varieties. Today, the marigold flower is available in a variety of heavily scented and odor-free species.

Listed below are some of the popular Marigold varieties 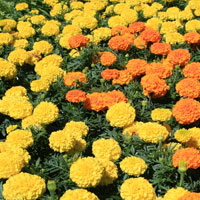 These marigolds are tall, erect-growing plants up to three feet in height. The flowers are globe-shaped and large. Flowers may measure up to 5 inches across. African Marigolds are very good bedding plants. These flowers are yellow to orange and do not include red colored Marigolds. The Africans take longer to reach flowering stage than the French type.

These Marigolds grow 5 inches to 18 inches high. Flower colors are red, orange and yellow. Red and orange bicolor patterns are also found. Flowers are smaller (2 inches across). French Marigolds are ideal for edging flowerbeds and in mass plantings. They also do well in containers and window boxes. 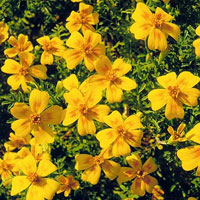 The signet Marigolds produce compact plants with finely divided lacy foliage and clusters of small, single flowers. They have yellow to orange colored, edible flowers. The flowers of signet marigolds have a spicy tarragon flavor. The foliage has a pleasant lemon fragrance. Signet Marigolds are excellent plants for edging beds and in window boxes. 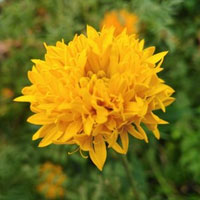 These marigolds are the sterile hybrids of tall African and dwarf French marigolds, hence known as mule Marigolds. Most triploid cultivars grow from 12 to 18 inches high. Though they have the combined qualities of their parents, their rate of germination is low

According to the research done by The Journal of Nutrition, the antioxidants in marigolds help fight and prevent cancer. Researcher examined the effects of lutein, an antioxidant extracted from marigolds, on breast cancer tumors. The results of their study show that lutein not only reduced the number of tumors in the breast, it also prevented new cancer cells from developing. Researchers found that even in small dietary amounts, the lutein from marigolds had a positive effect. Marigold has also been found effective against leukemia, colon and melanoma cancer cells.

Marigold is used traditionally in the area of wound healing. Rubbed on burns, scrapes and irritated skin, marigolds provide relief. When tested on rats, researchers in Brazil discovered that one of the mechanisms for wound healing comes from marigolds having the ability to promote the growth of new skin tissue, as well as new blood vessels that feed the skin. Researchers also state that marigold acts as an anti-inflammatory due to the presence of other compounds, including triterpenes and steroids.

Drinking marigold extracts with clean drinkable water is known to be quite effective in treating painful mouth and stomach ulcers. Marigold extract tends to encourage lymphatic system which is why it can decrease swelling and cleanse toxins which may be contributing to ulcers.

Marigold flower consists of high content of vitamin C which is a powerful antioxidant. Marigold flowers thus can be helpful in delaying or preventing cardiovascular diseases, cancer and strokes.

Marigold flowers have anti-inflammatory properties; they can provide relief from joint pain and arthritis. It is a common practice to use marigold extracts or oil for treating arthritis.

Petals of marigold flowers can be used to prepare curing baths by boiling them for some time before adding them to warm water for bath. Adding them to the bath tub can heal vaginal infections, bladder infections and hemorrhoids.

Marigold flower is effective in treating oily skin. Soak fresh flowers in warm water and then apply them to the skin at least once a day. Leave it on for 10- 15 minutes before washing it off with water.

Marigold is used by people to treat eczema, bruising and allergic reactions. People who have oily complexions also use this flower to get rid of their oily complexion. For this, they apply the wet fresh flower and wash their face with water. Marigold flower can also save your eyes and avoid any diseases of the eye like cataract and many others.

Marigold flower can reduce acid in the digestive system and can help digest food minutes. People also use the flower of Marigold to treat warts and scabies. You cannot even have any allergic reaction or hormonal effect due to these Marigold flowers. So use this flower and become healthy.

Flowers of marigold consist of number of active chemicals which has been found to reduce the number of cells that are being damaged by the free radicals. At the same time, it also helps in fighting the growth of bacteria at the places where the skin is wounded.

Marigold plays a vital role in the treatment of many eye diseases. It helps to reduce the inflammation of the eye, treatment of conjunctivitis and a number of other chronic ocular inflammatory conditions. It speeds up the treatment of the infections in the eyes.

Extracts from marigolds are extremely helpful in managing the symptoms of the common cold; flu coughs fevers or sore throats. It greatly boosts the immune system of the body to a significant level.

Nowadays, many people spend long hours sitting both on the job and at home, leading to development of various diseases such as piles/hemorrhoids. In such cases, you don’t have to look for expensive treatments in order to treat piles. You can use Marigold as part of your natural hemorrhoid treatment. For this, grind the yellow petals into paste form and apply the paste over the affected site. It will shrink the swollen veins that subsides the pain and swelling. Moreover, bleeding will also stop, regenerating the blood vessels to restore the normal integrity.

Marigold has natural antiseptic and antibacterial properties which are effective in treating microbial infections of the ear. If pus is present in the ear, first clear all the pus from the affected site and then put 2-3 drops of Marigold oil over it. The pus formation will be resolved in some days.

Extracts that have been taken from the flower show a property to lower the C-reactive protein and cytokine levels in the body and guard the cells against being damaged by free radicals. This is one of the most basic causes of cell deterioration and aging. The Marigold flower not only controls the oxidative damage that is provoked by the free radicals in the body that can affect the fragile tissues of skin under eyes and other sensitive parts but also protect against infections of the skin, GI tract, and genitals caused by viruses or bacteria.

16. Soothes Pains during Cramps and Spasms

Marigold’s antispasmodic actions are beneficial for giving relief from muscle spasms, stomach cramps, “charley horse” pains and pre-menstrual cramps. It is able to decrease cramping by improving the circulation of blood to the painful area and reducing the inflammatory responses. Florets of Marigold can be consumed in the form of tea to help digestion internally and improve liver health or applied over the abdomen in ointment/extract form in order to seep into tense muscles through the skin.

Traditional uses and benefits of Marigold