Trending
You are at:Home»Fruits»Health benefits of African Spinach 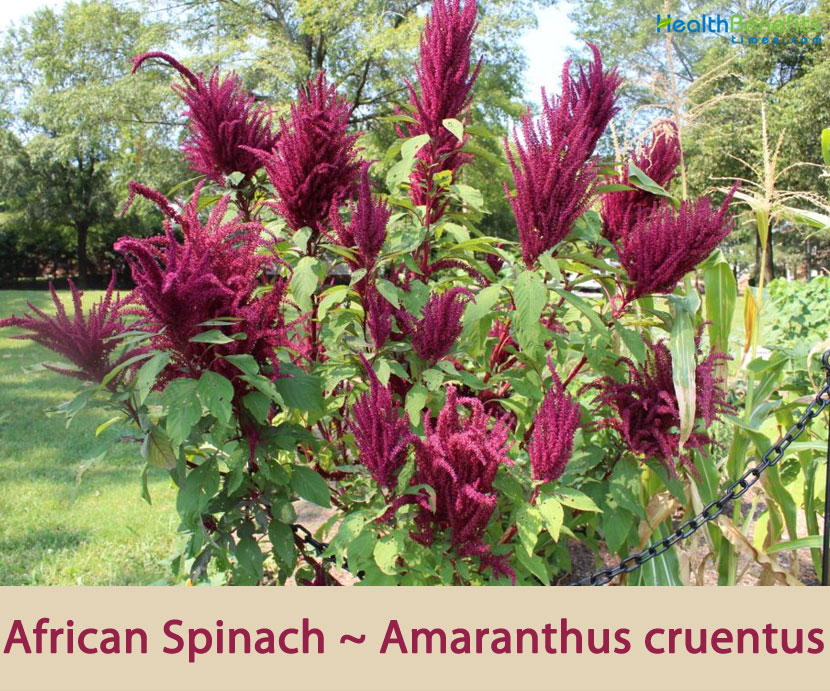 Amaranthus cruentus commonly known as African spinach is a flowering plant species that yields the nourishing staple amaranth grain. It is one of three Amaranthus species cultivated as a grain source, the other two being Amaranthus hypochondriacus and Amaranthus caudatus. The plant is native to Central-South America particularly Peru. In Mexico, it is called huautli and in English it has numerous common names, including Indian-spinach, Sudan-spinach, blood amaranth, bush greens, caterpillar amaranth, panicled amaranth, purple amaranth, red amaranth, red shank, wild amaranth, grain amaranth, velvet flower, prince’s feather and Mexican grain amaranth. In Maharashtra, it is called shravani maath or rajgira. In Kerala, it is called chuvanna cheera or commonly, cheera.

This species was in use as a food source in Central America as early as 4000 BC. The seeds are eaten as a cereal grain. They are black in the wild plant, and white in the domesticated form. They are ground into flour, popped like popcorn, cooked into porridge, and made into a confectionery called alegría. The leaves can be cooked like spinach, and the seeds can be germinated into nutritious sprouts. While A. cruentus is no longer a staple food, it is still grown and sold as a health food. In Maharashtra, during month of Shravan, a stir fried vegetable with just grated coconut is served during festivals. The stem is used in curry made up of Vaal Hyacinth bean.

African spinach is an annual, invasive, short-lived, fast-growing herbaceous plant that normally grows up to 2 m (6 ft.) in height. Normally plant reproduces only by seeds and has a short growing period of 4–6 weeks. It produces one dominant, large, central root (tap root). Stems are erect, green or reddish purple, stout, branched, angular, glabrous or thinly to moderately furnished with multicellular hairs. Thick stems are often 0.1 to 2.0 m in height, ribbed, and red dyed. Leaves are arranged spirally, simple, without stipules, long-petiolate. Lamina is broadly lanceolate to rhombic-ovate, 2–18 cm long and 2–15 cm wide, attenuate or shortly cuneate at base, obtuse to subacute at apex, mucronate, entire, glabrous to sparsely pilose and pinnately veined. Small fine hairs cover leaf and stem surfaces.

Several unisexual flowers are green and form finger-like spikes with long and dense terminal panicle and axillary spikes below. The terminal spike is often lax. There are 5 tepal segments, which are lanceolate, acute, 2-3 mm long, with a sharp and long tip, causing the inflorescence to feel distinctly prickly. Five, 1 mm long stamens form a male flower, while the female flower is a 1-celled ovary crowned by 3 stigmas. At maturity, the whole plant may be reddish. The large and complex inflorescence consists of numerous concentrated cymes arranged axillary, ended with racemes and spikes. The top one, with numerous laterals, is perpendicular, with thin branches up to 45 cm long. There 2-3 mm long bracts. The inflorescence is more than 50 cm long, characterized by high color variability. Flowering normally takes place in between July to September.

Each of them produces about 50 000 seeds in round or more often in lenticular shape, 1-1.5 mm in diameter, shiny, and dark brown. The mass of 1000 seeds is around 0.6-1.0 g. Grains are lenticular, with a color that varies from white, pink, through gold and brown to black. The coat of the seed is smooth and thin. The germ is campylotropous, which is caused by the shape of the seed and they are bent down and surround the perisperm like a ring. The perisperm is the main seed storage. Endosperm is present only in the micropylar area of the seed. 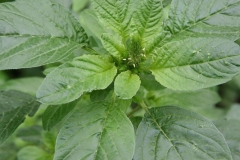 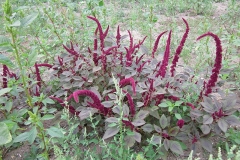 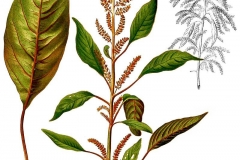 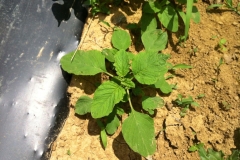 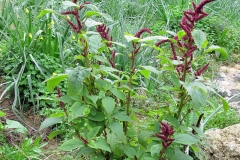 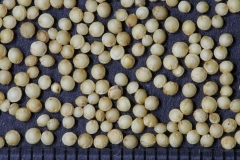 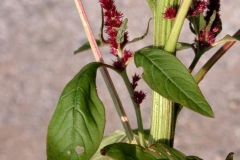 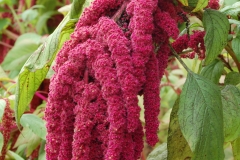 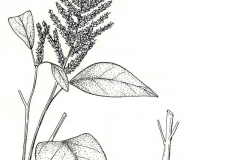 Consuming African spinach helps in preventing a heart attack due to its richness in lutein that prevents the thickening of the walls arteries, thus preventing atherosclerosis that is caused due to hardening of the arteries. Also proteins aids in reducing the cholesterol and other fat deposits in the blood vessels.

It consists of a high content of nitrite that helps in preventing the occurrence of heart attack and also prevents the body from heart diseases associated with fat deposition. Thus the intake of spinach regularly contributes to a healthy heart.

African spinach contain important antioxidants such as lutein, xanthene, and beta-carotene that help to improve eyesight and prevent the eyes from the effect of ultraviolet rays that can cause cataracts as well as vitamin A deficiency.

Also, zeaxanthin and lutein contained in African spinach aids in preventing cataracts and macular degeneration that can lead to blindness.  Regular consumption of African spinach helps greatly protecting our eyes from the damage caused by sunlight, thus promoting a healthy eye.

African spinach consists of some anti-ulcer properties that help to prevent the body from gastric ulcers. Research has shown that spinach and some other vegetables are capable of protecting the mucous membrane of the stomach, thus reducing the occurrence of gastric ulcers.

Also, the glycoglycerolipids contained in spinach helps in increasing the strength of the digestive tract lining, thus preventing unwanted inflammation in the body. Therefore consuming spinach daily will help in protecting the body from a gastric ulcer.

Regular intake of African spinach helps to improve skeletal and bone health because it consists of certain minerals related with bone health such as calcium and magnesium.

It is also a good source of vitamin K that is liable for retaining calcium in the bone matrix, thus resulting in bone mineralization. It is also rich in minerals like zinc, phosphorus, copper, manganese, and magnesium that help in the building of a strong bone and preventing osteoporosis. These minerals are also important for maintaining 8. healthy nails and teeth. Consume African spinach today for a strong and healthy bone.

Consuming African spinach regularly can help in preventing anemia due to its rich iron content. As we all know that iron deficiency leads to anemia. Iron is essential for menstruating women and growing children. It provides fewer calories and is free from cholesterol and fat.

Iron is essential in the body for good energy, as it is a component of hemoglobin which transfers oxygen to the body cells. Sufficient intake of iron-rich foods can go a long way in the prevention of anemia and consuming regularly can be of help.

African spinach helps in metabolism improvement because it consists of the amount of protein needed in the body which the enzymes convert into amino acid which in turn gives normal structure to the body cells. Also, the reformed mammal protein helps in the development and growth of muscle.

They help in increasing the body’s healing ability and provide a boost to the entire metabolism, thus leading to the optimal function of the organs. Consuming African spinach will contribute greatly in boosting metabolism.

African spinach has important contents such as foliate, potassium, and others that correct issues relating to cognitive depreciation and reduce the occurrence of Alzheimer’s disease. This suggests that regular eating of this vegetable reduces the occurrence and offer gradual corrections to already existing neural problems.

It helps in maintaining the proper function of the brain during old age. Regular consumption of African spinach makes your brain active and young and also helps in correcting cognitive issues.

African spinach is an excellent food for the skin as it is loaded with vitamins A, C, E and K as well as important minerals that play a vital role in skin care. It helps in treating acne, its richness in vitamin B also aids in protecting the skin from the harmful effects of ultraviolet rays that lead to skin cancer, sun damage and premature skin aging. It is packed with tons of antioxidants that destroy free radicals in the body; eating spinach will also help in reducing age-related degeneration, thus making your skin look younger and radiant.

African spinach is an excellent food for weight loss because of its low fat and calorie content. It has a good quality of fat-soluble dietary fiber and it’s very nutritious. Fiber helps in weight loss through proper digestion, lowering blood sugar levels, preventing constipation and curbs overheating. It is a good food for those who are trying to lose or maintain their weight. Adding African spinach to your daily diet will help greatly in weight maintenance.

African spinach consists of numerous minerals that can help in the prevention and treatment of cancer. It is rich in flavonoids which a phytonutrient with anti-cancer properties. It has been found effective in reducing cell division in human stomach and skin cancer cells. Various constituents in African spinach like folate, chlorophyll, and tocopherol help in the treatment and prevention of cancer.