Trending
You are at:Home»Vegetables»Health benefits of Air Potato ~ Dioscorea bulbifera 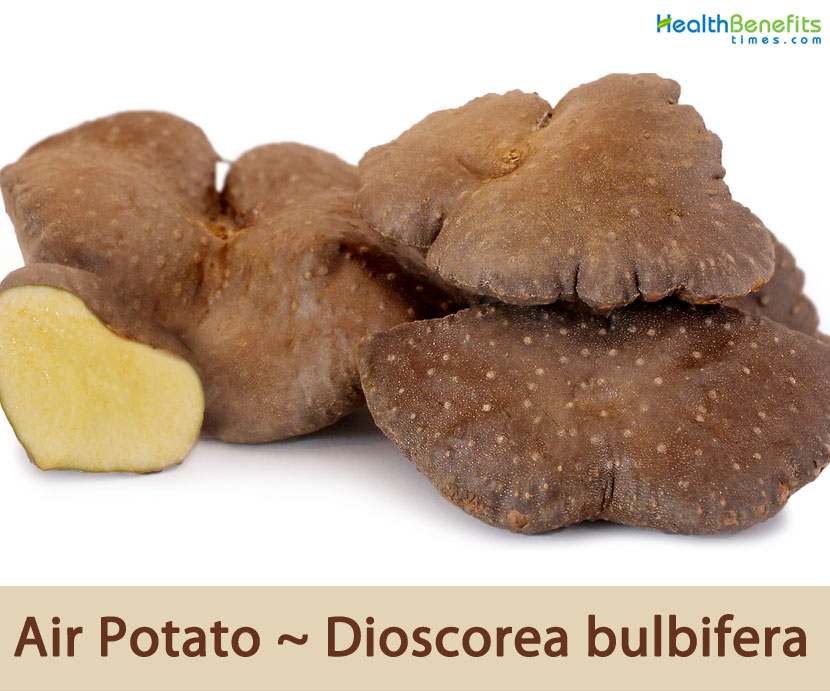 Dioscorea bulbifera commonly known as the air potato or air yam is a species of true yam in the yam family, Dioscoreaceae. The plant is native to Tropical Africa, Southern Asia, Maldives, and Northern Australia. In Myanmar, it is found in Chin, Kachin, Mandalay, Mon, Sagaing, and Shan. It is extensively cultivated and has become naturalized in many regions (Latin America, the West Indies, the Southeastern United States, and various oceanic islands). It is also known as the up-yam in Nigerian Pidgin English, since the plant is cultivated more for its bulbils than for its tubers. Name air potato refers to the numerous bulbils (potato-like tubers) that grow on the stem and hang in the air.

Popular common names of the plant include Aerial yam, Bitter yam, Cheeky yam, Potato yam, Wild yam, parsnip yam, Bulbil-bearing yam, Hoi, Malacca yam, yam and otaheite yam. Air Potato produces several axillary tubers but these can occasionally weigh several pounds. These are edible and potato like in flavor. Root tubers are usually absent or insignificant. This plant was introduced to the United States as a potential food crop but quickly escaped cultivation. It is considered extremely invasive in Florida and other parts of the Southeast were it smothers native flora. It has also been reported as escaping cultivation in parts of the Midwest.

Air Potato is a monocotyledonous, dioecious, herbaceous, perennial, non-spiny, climbing plant that normally grows up to 10 m long.  The plant grows quickly, around 8 inches per day, and easily climbs to the top of the tall shrubs and trees. Hosts plant often dies as a result of lack of light (which is essential for the process of photosynthesis). Normally plant is found growing in moist forests, mesic forests, hardwood forests, disturbed areas, urban forests, forest gaps, forest edges, ruderal areas and along roadsides, mixed forest margins, river banks, valley sides, thickets, fence rows, and hardwood hammocks. It requires a deep, well-drained, sandy loam that is not liable to water-logging. Air yam is found in both Africa and Asia with slight differences between those found in the two places. The plant has terete (rounded) stems that are thin, wiry, and usually unwinged.

Leaves are cordate-shaped with elongated tips, thin and glabrous, and range from 10-20 cm in length and 5-15 cm in width. Leaves are long-petioled; often 8 cm on mature leaves and between 2-3 cm on newer leaves nearest the terminal bud, and occur in an alternate arrangement along a branching, hairless, stem. Leaves are vibrant green on the upper surface and a lighter green on the lower surface depending upon conditions. Basal lobes of leaves are broadly rounded. Leaf margin is entire. Leaf venation is parallel and converges at the leaf base. Leaves of D. bulbifera and other Dioscorea species have three arcuate primary nerves which radiate from the central base of a given leaf to converge at the leaf tip. The remaining primary nerves, while converging at the base, do not reach the leaf tip. Petioles are distinctly flattened along the upper surface and, at the point of attachment to individual leaves; flare out to create small wing-like structures which are ruffled in appearance.

Air potato is dioecious (with carpellate (female) and staminate (male) flowers borne on separate plants), and only carpellate plants have been observed in Florida. The carpellate inflorescences are spikes to 16 inches long that may be borne singly or in fascicles of up to six in the leaf axils. Each carpellate inflorescence bears up to 50 tiny greenish-white flowers. Flower production is not common in Florida air potato plants, but is most likely to occur at the end of the growing season (late summer through early winter). Since staminate plants have not been documented in Florida, there is no sexual reproduction and seed production. Instead, plants reproduce asexually by means of bulbils (aerial tubers).

One to four bulbils are produced at each leaf axil, and a single plant is capable of producing nearly 200 bulbils in a growing season. Potato-like in appearance, they are generally globose, but occasionally irregularly shaped, and can measure up to 6 inches long and weighing from 0.5 to 2 kg. Bulbils may be brown, rough, and spotted with warts, uneven and very thick, with a firm, starchy and slimy texture, and soft orange or brown colored with a smooth skin.  Air potatoes have a mild, earthy, and sometimes bitter flavor.

Bulbils may be produced at any time of year, but are most prevalent at the end of the growing season (autumn to winter). After they have dropped from the vine, the bulbils typically undergo a period of dormancy, sprouting at the beginning of the next growing season. Potato-like tubers (bulbils) are considered as the chief means of reproduction that are located at the leaf axils. Some varieties can be eaten raw while some require soaking or boiling for detoxification before eating. It is not grown much commercially since the flavor of other yams is preferred by most people. However it is popular in home vegetable gardens because it produces a crop after only 4 months of growth and continues for the life of the vine, as long as two years.

Fertile flowers are followed by dry, winged, dehiscent, trilocular capsule 1.8-2.8 cm in length and from 1-1.5 cm in width. Seeds are unilaterally winged, elongated and are slightly curved at the point of attachment. Seeds range in length from 12-22 mm. 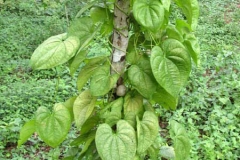 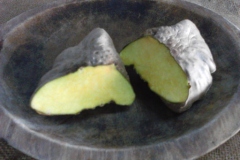 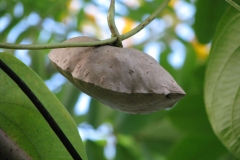 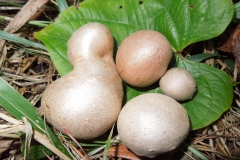 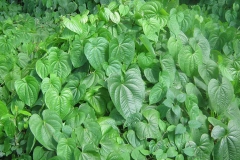 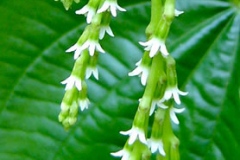 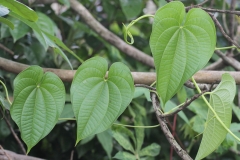 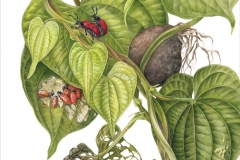 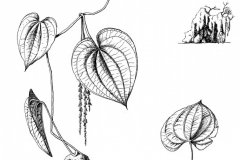 Powdered form of air potato has been traditionally used for treating different skin conditions. You can apply it topically to relieve blisters and boils.

Air potato has been consumed to help cure or prevent different kinds of eye ailments like conjunctivitis. Conjunctivitis or pink eye is the inflammation of the outermost layer of the white part of your eye as well as the inner surface of your eyelids.

Apparently, air potato is rich in flavonoids and isoflavonoids which can be sources of antioxidants. Though there have been mentions that flavonoids are poorly absorbed in your body, it could be insignificant when it comes to antioxidant activity. Still, this is something to look into more.

Air potato has been used as a home remedy to treat or cure some respiratory disorders. It is good for treating asthma, coughs, and tonsillitis.

Eating air potato can do different things to your body that can lead to a healthier heart. First, it seems to be able to decrease your blood cholesterol levels. Another thing is that it is also able to help regulate your blood pressure. Normal levels of cholesterol and blood pressure can both help in keeping your heart healthy and reducing the risk of different kinds of heart diseases.

Air potato has been found to have anti-inflammatory activity. This can be very helpful for different conditions like swelling caused by injuries as well as arthritis.

Consuming air potato can help improve or keep your digestive system healthy and away from some common digestive disorders. It should be helpful in regulating your stool movement thus avoiding conditions like constipation and diarrhea.

Prevention is a key step in the management of air potato. Bulbils are the primary mechanism of spread and research has shown even minutely small bulbils can sprout and form new plants. Water is also a major means of dispersal, so care must be taken to first remove populations along water bodies where bulbils may be easily spread.

Weeds such as air potato usually attack open or disturbed areas following a burn, clearing or mowing so these areas are mostly vulnerable to invasion. Healthy ecosystem with good species diversity will help to discourage infestations. Regular monitoring and removal of plants can prevent the spread and establishment of air potato. Programs to educate homeowners on proper plant identification will also reduce the spread of this species. Native alternatives to air potato for use in home landscaping or natural areas include Carolina jessamine, Florida yam, purple passionflower and American wisteria.

Cut vines that are high in trees. Remove bulbils and dig up underground tubers if possible. Burning is not recommended, as it results in excessive damage to the native vegetation under the vines.

Mechanical control is limited for air potato, as control of the vines usually results in damage to the vegetation being climbed/smothered by the air potato. Mowing may help suppress air potato in the short term; however mowers and other brush-cutting equipment may disperse bulbils long distances, either through contaminated equipment or throwing of bulbils during the mowing operation.

Air potato leaf beetle, Lilioceris cheni, has been an effective biological control for air potato. The air potato beetle was released in 2012 to help control the air potato vine by causing damage to the leaves of the plant. Those with air potato leaf beetle on their property will see better control if they remove and dispose of (in landfill-bound garbage containers) the “potatoes” left behind by the vine in the fall and winter. The beetles eat the leaves, but not the bulbils.

Chemical control of D. bulbifera should include mechanical cutting followed by application of one of the following herbicides to the cut stems:

Follow-up treatments are recommended at 6-month intervals until control is completed.