Trending
You are at:Home»Herbs and Spices»Facts and benefits of Alkanet 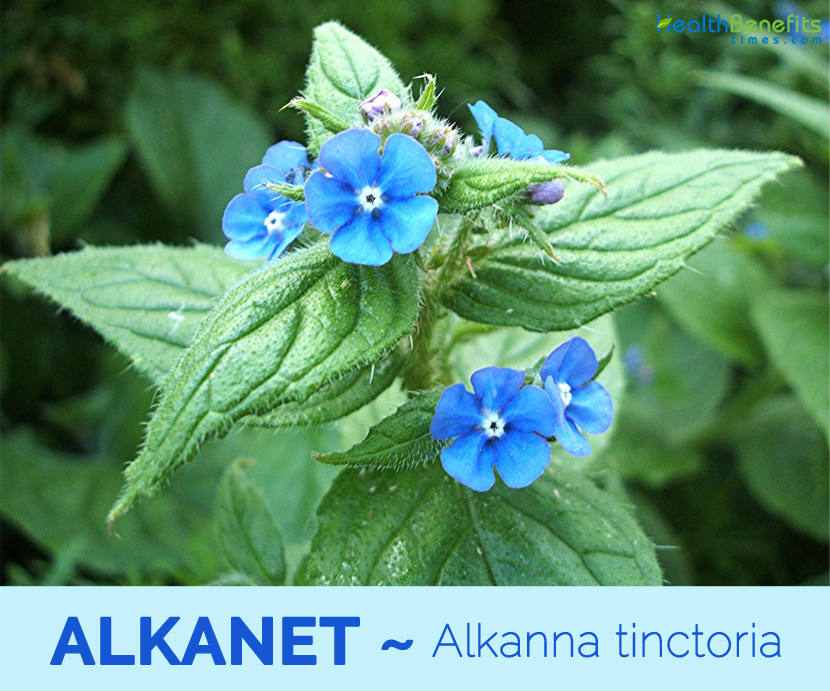 Alkanna tinctoria commonly known as alkanet, bugloss, anchusa, Spanish bugloss, dyer’s bugloss, orchanet, common alkanet and hoary puccoon is a plant in the Boraginaceae (Borage family) whose roots are used as a red dye. The plant is native in the Mediterranean region. The name Anchusa is derived from the Greek word anchousa which means paint, from the use of the root as a dye. The root produces a fine red coloring material which has been used as a dye in the Mediterranean region since antiquity. The root as a dyestuff is soluble in alcohol, ether, and the oils, but is insoluble in water. It is used to give color to wines and alcoholic tinctures, to vegetable oils, and to varnishes

Alkanet is a biennial or perennial herbaceous plant that grows about 0.3 to 0.6 m in height. The plant is found growing in all kinds of temperate environments such as grazing pastures, in alfalfa fields, in pine forests, on prime rangeland, as well as riparian and even in waste or deserted lands. It prefers moderately fertile, humus rich, moist but well-drained soil and can grow in nutritionally poor soil. The plant has dark red root of blackish appearance externally but blue-red inside, with a whitish core. Root produces a fine red coloring material which has been used as a dye in the Mediterranean region since antiquity. It is also used to give color to wines and alcoholic tinctures, to vegetable oils, and to varnishes. The plant has prostrate, branched stems. The stems are covered with long white hairs.

The alternate leaves are about 1-2 inch long and are oblong with rounded tips. Lower leaves are stalked and can grow up to eight inches in length. Leaves in the upper part of the herb are narrow, they can be oblong or lance like in shape, these upper leaves can reach about six inches in length with a width an inch.  The leaves have sparse white hairs on their upper sides, hairs along their margins, and a white “fur” on their undersides.

The plant produces blue to purple trumpet-shaped flowers that are arranged in loose, 1-sided scorpioid racemes.  The corolla is rather small, between funnel and salver-shaped; usually purplish-blue, but in some species yellow or whitish; the calyx enlarges in fruit. Flowering normally takes place from June to July. Flower is followed by minute nut like fruits. The root, which is often very large in proportion to the size of the plant, yields in many of the species a red dye from the rind. Root as a dyestuff is soluble in alcohol, ether, and the oils, but is insoluble in water and is used to give color to wines and alcoholic tinctures, to vegetable oils, and to varnishes.

According to USDA National Nutrient, alkanet root has proven to be very important part of herbal plant to cure several diseases. Listed below are top health benefits of alkanet root which you can read and learn more in order to add your knowledge especially for your herbal and health information.

Alkanet root is quite helpful to maintain the health of heart. This can be done by soaking alkanet root into the water and extract the essence to be drunk. By doing so, the alkanet root can help to release the poison out of the body and enhance the function of heart to absorb blood.

Rheumatic disease is one which normally attack muscle and nerves to be painful and sore felt. Rheumatic can be overcome by continuously applying the essential oil of alkanet along the painful area or routinely consuming the powder to reduce the pain.

After sore and painful of rheumatic, the alkanet root is beneficial to reduce the sore due to other cases. One of them is sore of stomach when the woman gets period or more popularly known as dysmenorrhea. When a woman has dysmenorrhea, the stomach will feel very painful that she cannot do anything. Therefore, the anti-inflammation effect of the root can act as anti-sore too to cure this condition.

Alkanet root has been proven to be very effective in increasing hair strength since alkanet is natural hair color which is very safe and has no effect on your health. Alkanet root extracted into oil can be very useful to cover hair cuticle, prevent hair fall, and symptom of bald.

Anti-virus and anti-bacterial features present in alkanet root are very amazing to protect your essential organs of the body, particularly skin. As the most forward body protector, skin is very unsafe of getting suffered by any foreign materials which can create problems such as aging or wrinkle. Applying alkanet root oil or consuming alkanet root powder help you to maintain the skin health and beauty by reducing aging and wrinkle by shadowing the remained scare.

Alkanet root is quite beneficial for overcoming and healing skin fungi. The root has very effective anti-fungi to particularly heal any diseases related to skin fungi such as phlegm, ringworm, and eczema on your skin disorder.

Alkanet root is beneficial to prevent the cracking nail and lessen the inflammation happen to the nail. Regular use of essential oil of alkanet root along your nail will prohibit the nail to be irritated, sore, and infected.

Alkanet root can also be applied to cure herpes. Herpes is such immunity and skin disorder which lead to a very serious condition of skin scare or skin bleeding due to the open scare. Herpes is caused by virus; thus, in order to heal the disease, you need such anti-virus effect which you can get maximal from alkanet root.

Natural cooling character of alkanet root helps to cool down the fever just like what Ayurveda traditional healing do. Moreover, alkanet root can induce the sweat which will fasten the healing process of fever suffering.

Alkanet root has hypo-tense impact which helps to lessen stress on your cardiovascular system and is very effective to reduce higher blood pressure. This also may help to prevent plague, prohibit heart attack to be happened and reduce the risk of get suffering from stroke disease.

Alkanet root is helpful to protect the skin from any infection and recover the inflammation. Alkanet root is widely used to heal burn scars since it has the natural ability of anti-inflammation and cooling to absorb the heat out of the skin. This makes alkanet root useful as sunblock and sunburn remover.

No need to consume much chemical diet medicine which is not surely safety guaranteed if you want such a slim and shaped body. Consuming alkanet root powder routinely may help you to reduce the excessive weight of the body safety and naturally.

Traditional uses and benefits of Alkanet