Instagram has over a billion active users with half a billion of them logging on the platform every day. And since people of every age and gender use Instagram, Health experts should also use Instagram. People get inspiration, advice, and a bit of a daily laugh from doctors, nurses, and healthcare providers.

Here is a list of top 10 American health experts who are also Instagram experts whom you should follow to fill your feed with some valuable posts. 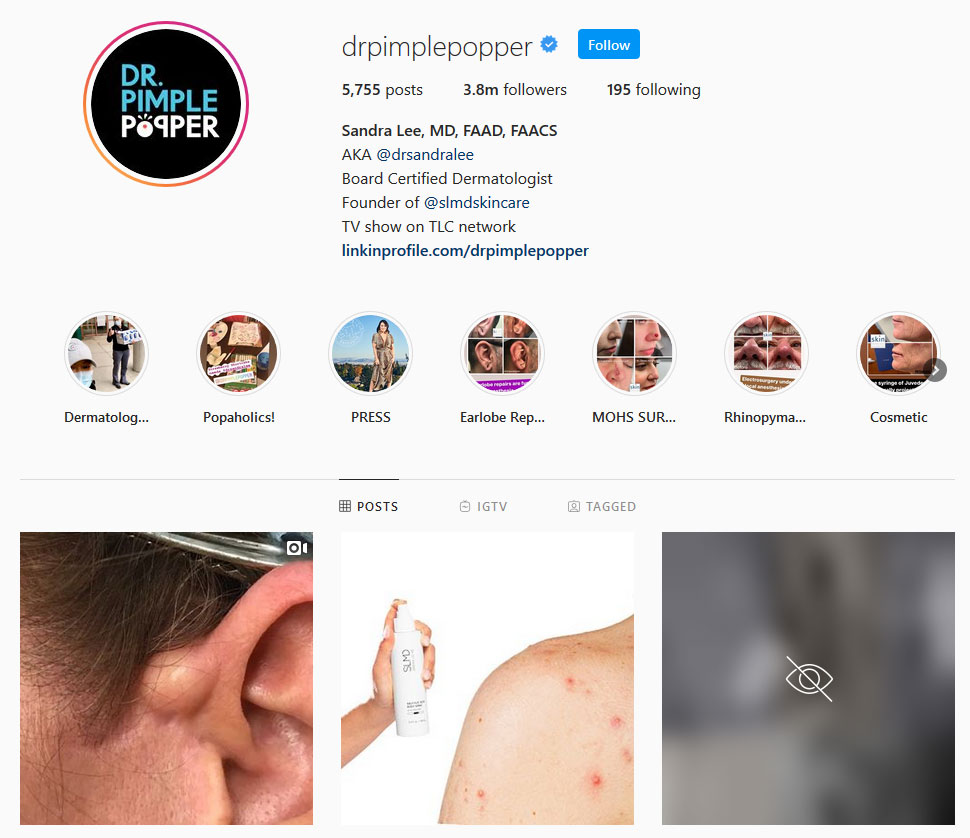 Sandra Lee is an American board-certified dermatologist and a Youtuber from California. She is well known for her online videos and her television series Dr. Pimple Popper. Her videos of skin extractions on patients are quite popular on Instagram. She offers discounted treatments or free treatments in exchange for permission from the patients to post videos of procedures on them.  Lee has also launched her own line of skincare products, SLMD Skincare Products in 2017 which includes products like acne cleanser and lotion, clarifying treatment with retinol and a daily moisturizer. The television series Dr. Pimple Popper was first premiered in July 2018 and has four seasons as of now. She is probably the most followed doctor on Instagram. She also has over 6 million subscribers on YouTube with almost 2 billion views on the videos. 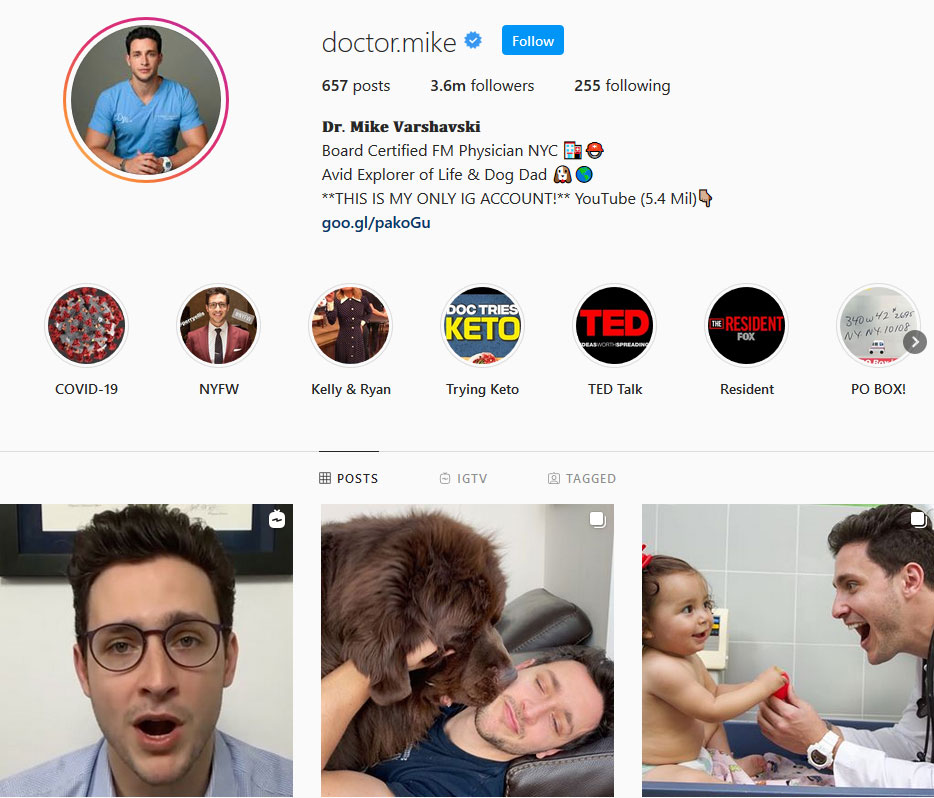 Mike (Mikhail) Varshavski is a Russian-American internet celebrity doctor. He went viral after he was featured in a Buzzfeed Article and People’s magazine issue in which he was given the title of The Sexiest Doctor Alive. He also has a YouTube channel where he uploads videos on medical knowledge and entertainment. In 2015, Mike established a foundation, Limitless Tomorrow, to give scholarships to students and he has raised money for it with the help of his social media accounts. In 2016, he collaborated with the dating app Coffee Meets Bagel in a campaign and raised 91 thousand dollars for his foundation. In 2018, Doctor Mike was nominated in the category of Health and Wellness in the Shorty Awards. He also has over 5 million subscribers on YouTube with over 500 million views on the videos. 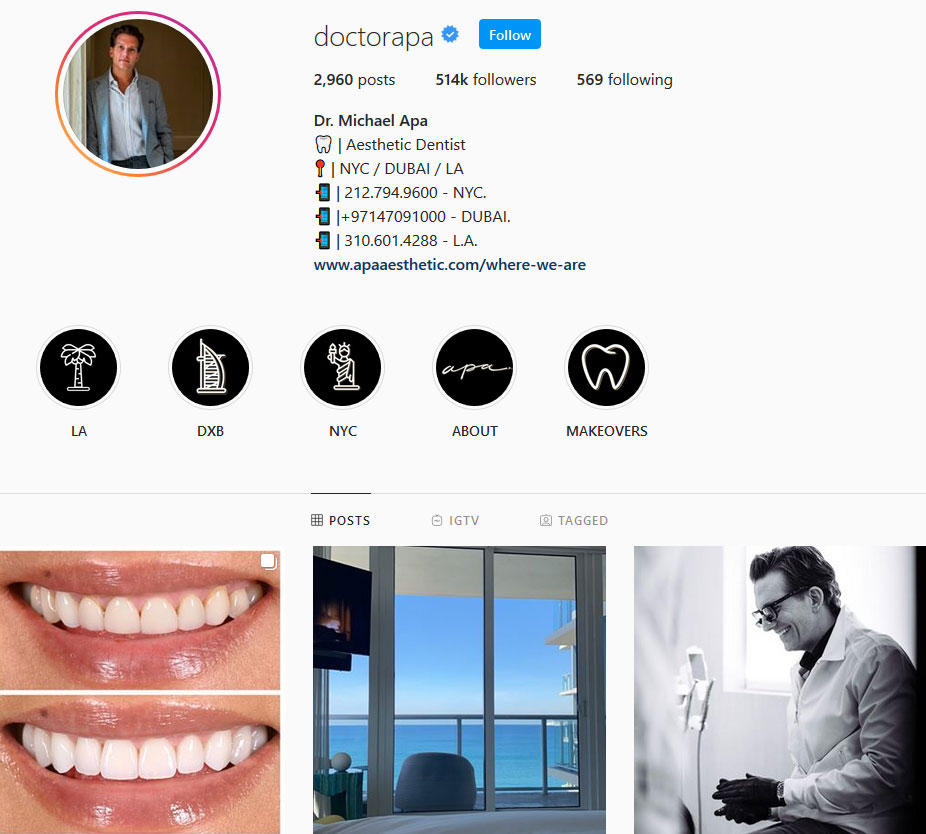 Michael Apa is an Aesthetic Dentist based in New York. He also practices dentistry in Dubai and Los Angeles. He makes dentistry not boring and entertains people with his content on Instagram. His Instagram is filled with lifestyle photos. He regularly makes trips from New York City to Dubai and back and also travels to Los Angeles for his job so there are a lot of photos featuring his travel. It also contains pictures from when he has made a television appearance. He likes to share humorous memes, particularly from the medical world to keep his followers entertained. The before and after images of his patients’ smiles display the remarkable transformation he does with his skills. He has become a well-known name in the medical world and also to the general public on Instagram. 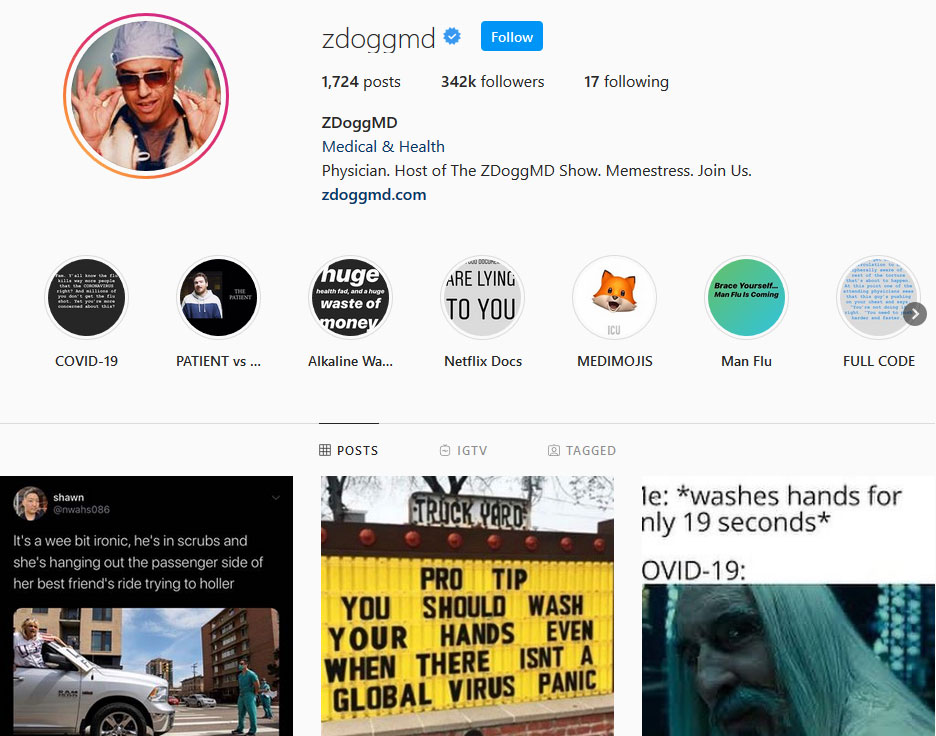 Zubin Damania is an American physician, comedian, musician, and internet personality. He also writes and performs comedic raps on medical issues. He founded Turntable Health which was a direct primary care clinic in Las Vegas in 2013. He has also given a talk at TEDMED 2013 on the topic “Are Zombie Doctors Taking Over America?”. He promotes the idea of a patient-centered organization dedicated to preventative care. He rose to popularity by writing, filming, and performing musical parodies and comedy sketches about the medical issues and other issues present in the American healthcare system. He does these comedy videos under an alias name called ZDoggMD. He has been named one of the top 14 people to watch in 2014 by leading newspapers and magazines and is featured or interviewed in several medical based and other types of well-known publications. 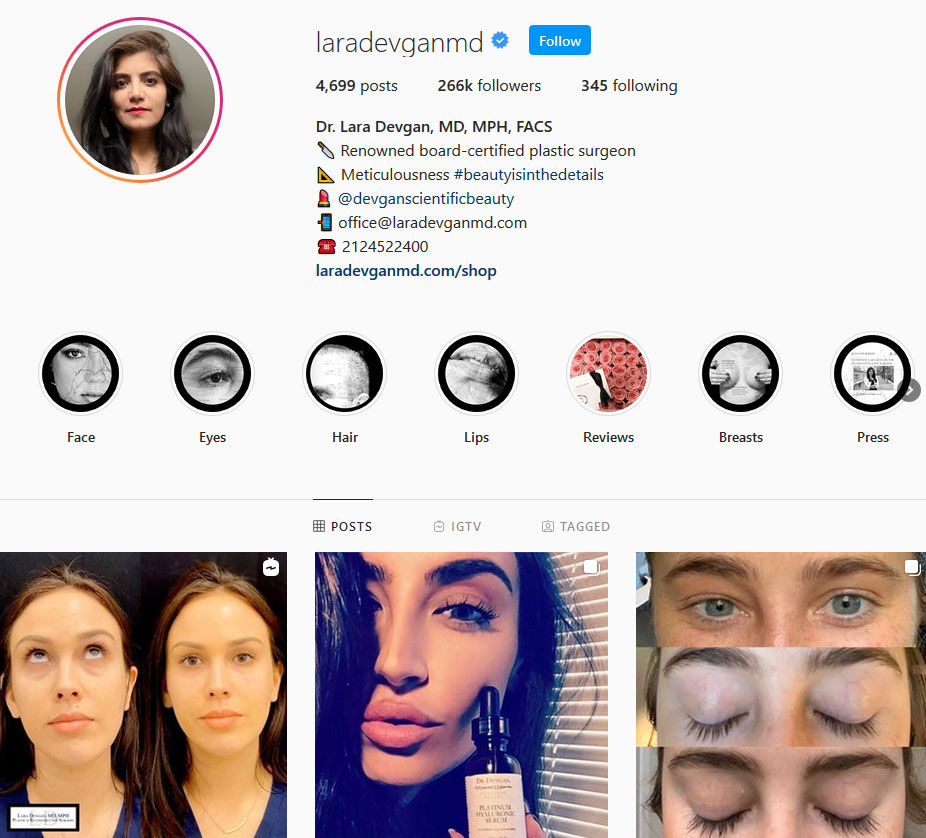 Lara Devgan is a Plastic and Reconstructive Surgeon based in New York. She is an attending physician at several of the New York City Hospitals. She joined RealSelf which is a review and directory website for cosmetic and aesthetic medicine in 2018 as the Chief Medical Officer. Her Instagram has been growing well as she is a plastic surgeon and plastic surgery is visual in nature which suits the needs of this image sharing platform. She is also the owner of a luxury skincare line. Her products are also very popular and bring her a lot of new audiences. She posts before and after photos of the patients she has operated on for the audience to see. She regularly shares media articles that she has been featured or mentioned in. 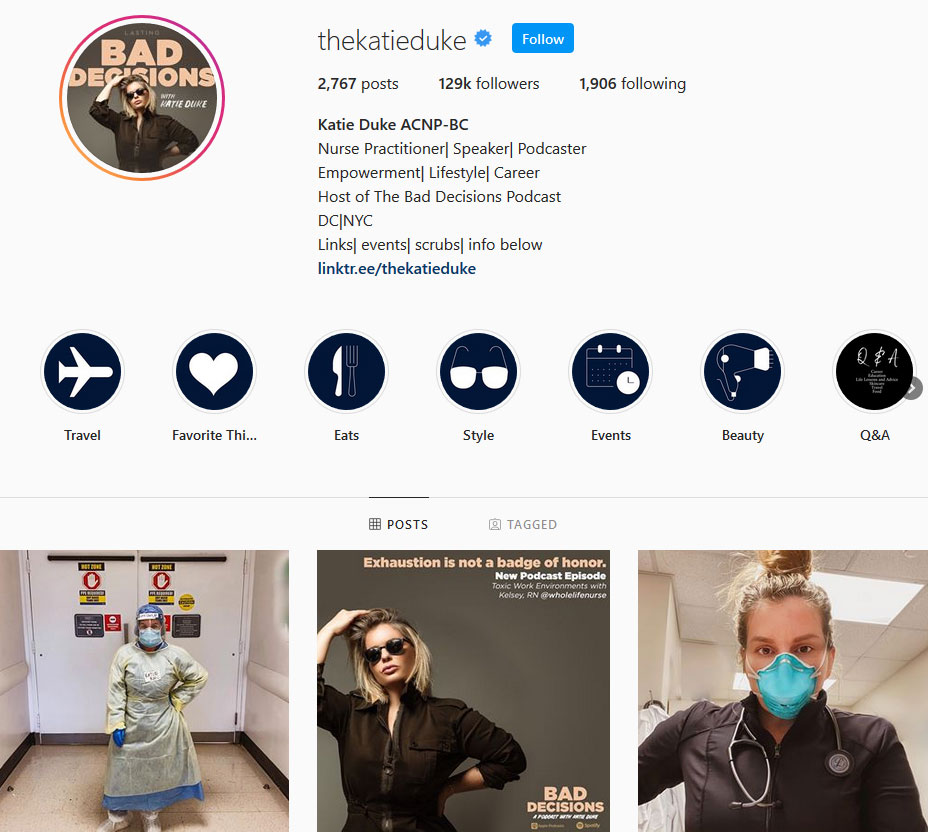 Katie Duke is a Nurse Practitioner in New York. She has 15 years of experience in Nursing with the last 4 years spent working as a Board-Certified Acute Care Nurse Practitioner specializing in Inpatient Cardiology and Cardiac Surgery. She also serves as a Clinical preceptor to graduate students. She is also an editorial contributor, motivational speaker, and social media influencer. She hosts a podcast called Bad Decisions and is the founder of the “Duke It Up” Event which is an empowering and mentoring workshop. She strives to be the public face of Nurses in America. She shares honest photos on the struggle of maintaining a healthy lifestyle and finding work-life balance working in the healthcare field. In 2019, she launched a uniforms collection which is an affordable and functional clothing line for healthcare providers. 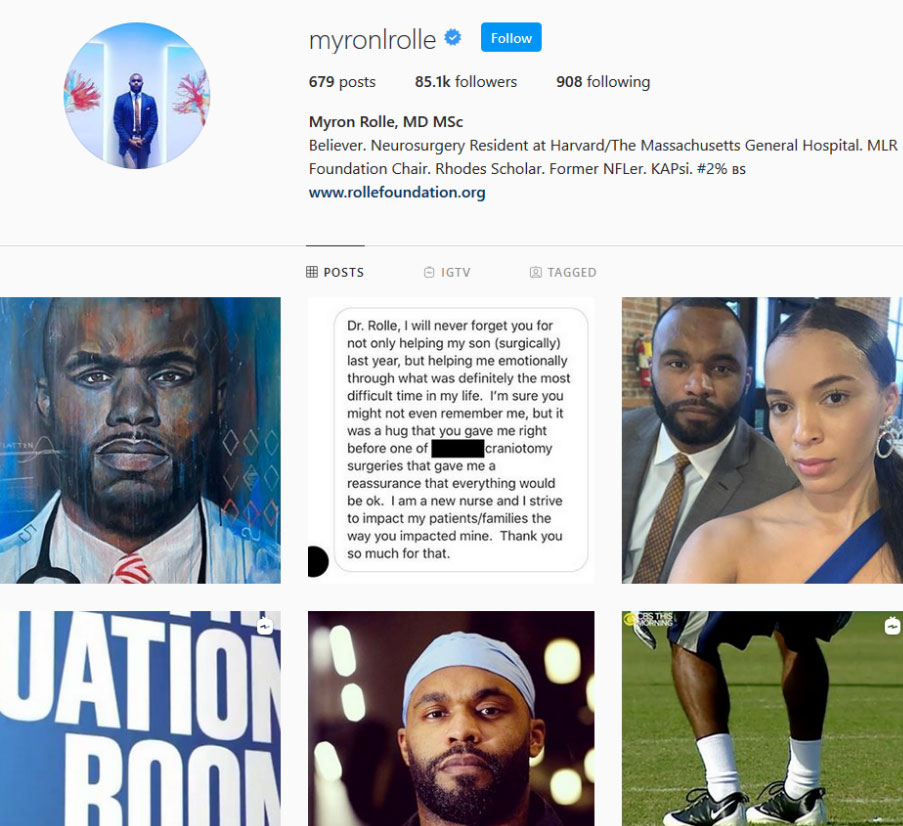 Myron L. Rolle is a Bahamian American neurosurgeon resident at Harvard. He is also a former NFL football player. He played college football in Florida and was drafted by the Tennessee Titans to play in the 2010 NFL Draft. He also spent a brief time with the Pittsburgh Steelers before retiring from football. He chose to leave the NFL to enroll in a medical school and graduated in 2017 and practicing currently at Massachusetts and Harvard. He was awarded a Rhodes Scholarship. In 2010, he was chosen to be the second smartest athlete in sports by Sporting News Magazine. He is quite popular on Instagram because of the personal and professional photos he shares from his impressive and inspiring life and also for the football photos he shares of the old times. 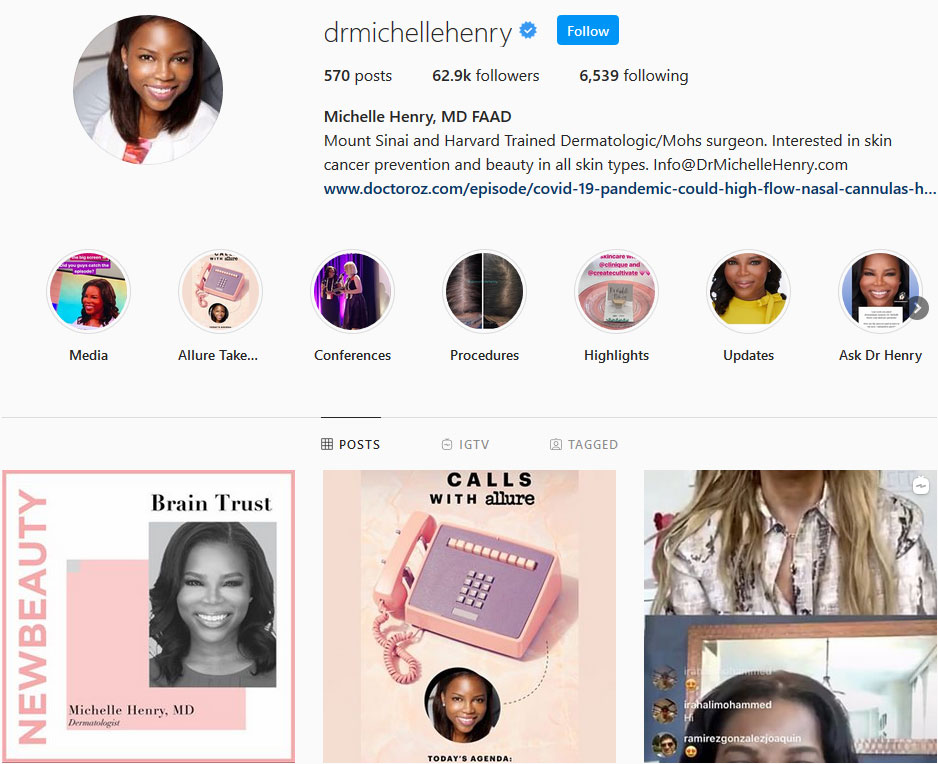 Michelle Henry is a Harvard trained Mohs Surgeon and a board-certified dermatologist. She is currently a Clinical Instructor of Dermatology in New York. She practices Mohs micrographic, reconstructive, and cosmetic surgery. She specializes in high-risk cancer treatments, aesthetic surgery, and Skin of Color. She also has extensive experience in teaching physicians aesthetic procedures such as injecting neuromodulators, injecting fillers, laser surgery, and hair restoration. She has published numerous articles and chapters on skin cancer treatment and cancer surgery. She is a committed research scientist and received Tromovitch Award by the American College of Mohs Surgery. Her treatment philosophy is to provide holistic care while utilizing the latest techniques. On Instagram, she showcases procedures she performs, conferences she attends, and media articles she has been featured in. She regularly posts before and after photos of her patients. 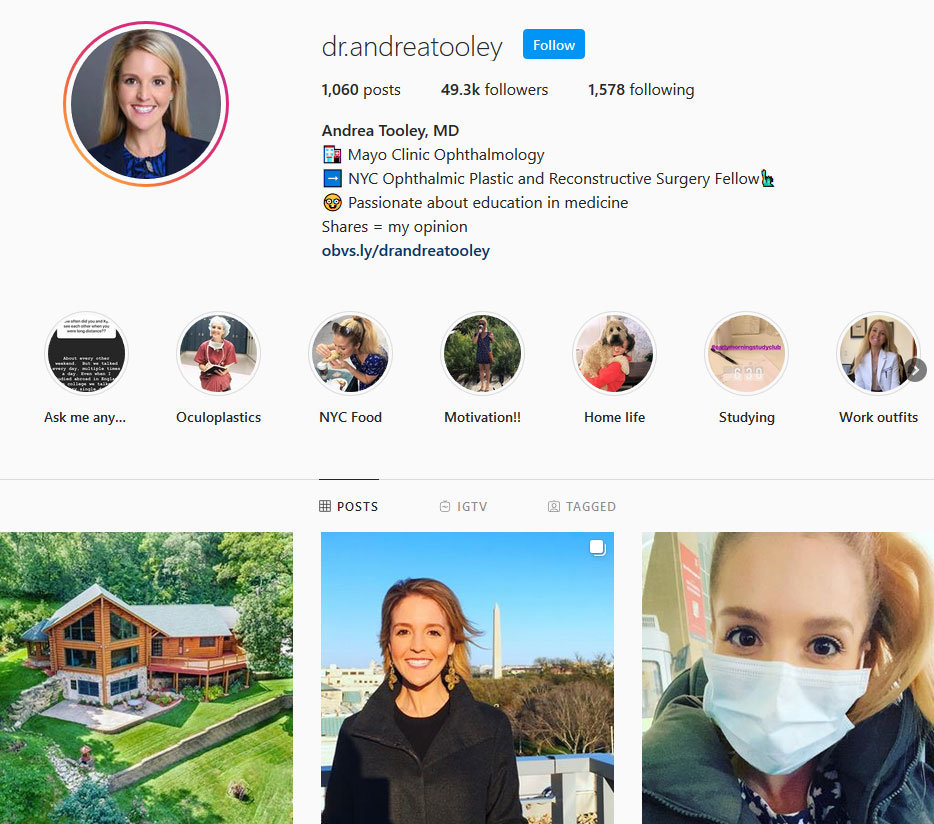 Andrea Tooley is an ophthalmic plastic and reconstructive surgery fellow living in New York City. She uses her Instagram to share her passion for health, wellness, and medicine. She has a love for fitness and cooking. She loves to talk about med school, studying for med school, and how to enjoy the journey to become a physician. As an eye surgeon, she often shares her photos from the operating room operating on her patients, testing out surgical equipment, or learning from her mentors. She regularly shares tips on how to study for upcoming medical board examinations and clips from conferences she attends. She also has a youtube channel with almost 70 thousand subscribers and almost 5 million views on her videos. She does video interviews with physicians and medical professionals and posts for her viewers. 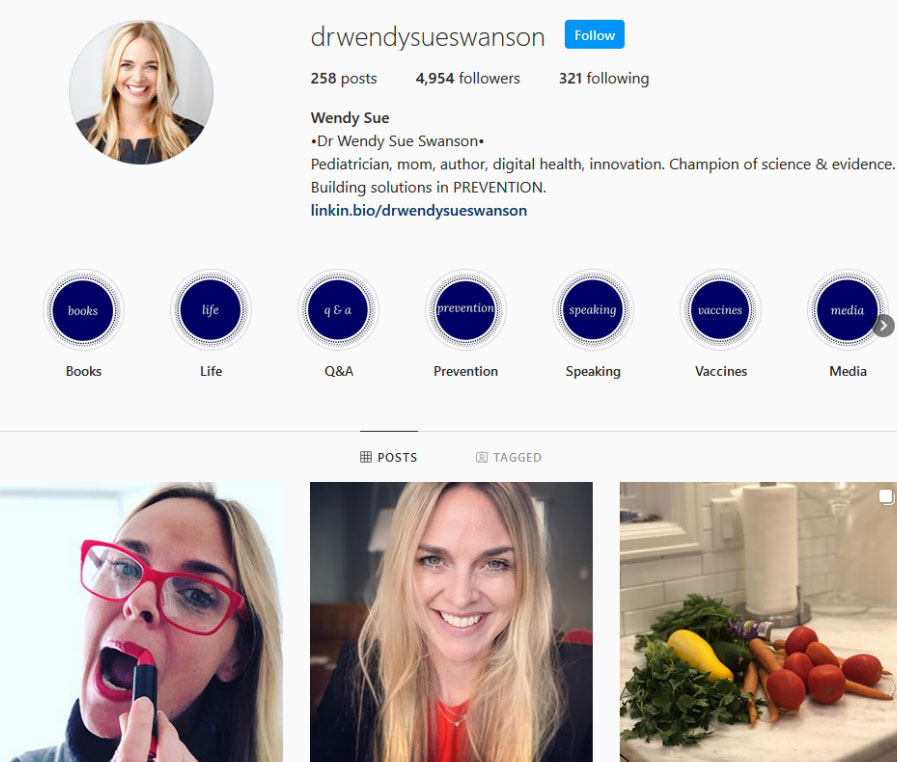 Wendy Sue Swanson is an American Paediatrician based in Seattle. She is also an educator and author of her blog called “Seattle Mama Doc”. She has created a valuable source of information for parents who need medical advice for their young children. She’s passionate about digital health, innovation, and evidence-based science. Her Instagram showcases her as an expert pediatrician and includes interviews of her with the media and clips of her when she’s featured in some podcasts. She also shares general illness tips on how to prevent them and cure them. She strongly supports the idea that parents should use online technologies and tools to connect with healthcare providers as she believes that a well-informed patient reduces the chance of a medical emergency and reduces healthcare costs too. She has dedicated her career to educating physicians and the general public through her various published articles.