Trending
You are at:Home»Herbs and Spices»Traditional uses and benefits of Angel’s Trumpet 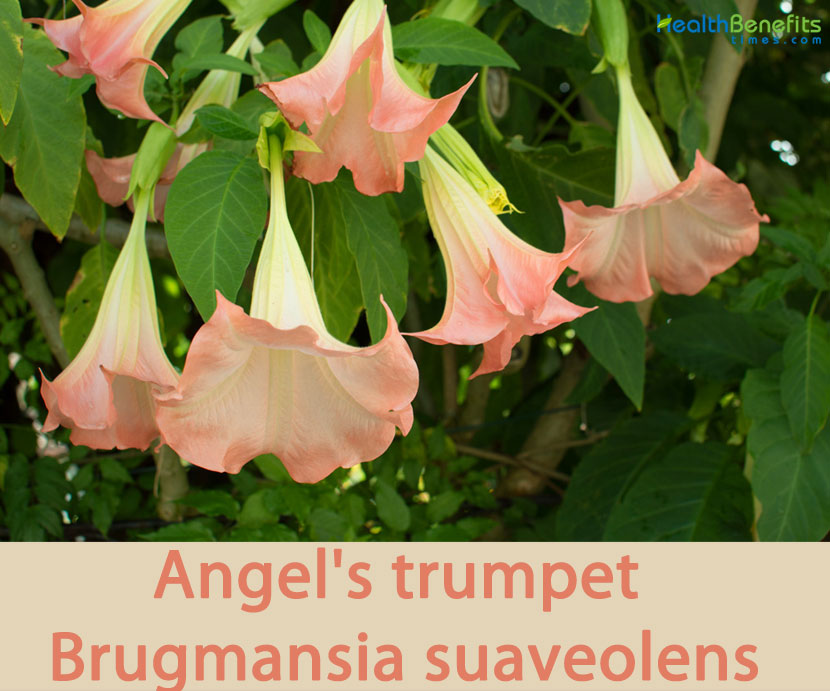 Brugmansia suaveolens commonly known as Brazil’s white angel trumpet or angel’s tears is a species of flowering plant in the nightshade family Solanaceae. Angel trumpets are closely related to potato, tomato, eggplant, petunia and tobacco. The plant is native to coastal rainforests of south eastern Brazil. As a result of human interaction with this species, it can now be found growing in residential areas throughout much of South America and occasionally in Central America, Mexico, California, Greece and even in parts of Florida. Like several other species of Brugmansia, it exists as an introduced species in areas outside its native range. Angel’s trumpet, night bells, trumpet flower, white angel’s-trumpet, angel star, angel’s tears, Brazil’s white angel trumpet, snowy angel’s trumpet, cornucopia, datura, devil’s trumpet, downy thorn-apple, Hindu datura, Hindu thorn-apple, hoary thorn-apple, horn-of-plenty, jimson weed, metel, purple thorn-apple and thorn apple are some of the popular common names of the plant.

The genus name was given in honor of Sebald Justin Brugmans (1763-1819), a Dutch botanist and physician. Latin specific epithet suaveolens means with a sweet fragrance. The common name Angel’s Trumpet comes from the trumpet-shaped flowers being aimed downwards, resembling the angelic horns. The name refers to two different plants – Brugmansia and Datura, and is often used for both genera. In many tropical and temperate areas of the world it is used as an ornamental plant (e.g. Europe) and in traditional medicine. It is also considered an invasive weed, having escaped from cultivation, particularly in the Pacific but occasionally elsewhere. In parts of eastern Australia it blocks waterways by forming extensive colonies through vegetative reproduction. It should also be monitored in other countries where present, especially in Africa and Asia. Like close relatives in the genus Datura, Brugmansia species consists of alkaloids which are used as narcotics and are responsible for cases of accidental poisoning.

Angel’s trumpet is a semi-woody shrub or small tree that normally grows about 3 m tall, or to 4.5 m or taller under optimal conditions, and usually with a many-branched single trunk. The plant is found growing in lowland rainforest, forest edges, disturbed habitats, riverbanks and urban open spaces. It is occasionally naturalized in dense forest along streams. In India, it is often heard of in the Sanskrit scriptures as being one of the plants of choice of the travelling sadhus, particularly worshippers of Lord Shiva, the god of dissolution. With the proper preparation it is said to have hallucinogenic properties, however beginners beware, for a wrongly prepared dose can be both toxic and fatal. Commonly, Datura species are grown for their attractive flowers. However, all parts of the plant are poisonous. Angel’s Trumpet is extensively cultivated and naturalized in India. It can be seen growing wild in the Himalayas, up to altitudes of 1300-1700 m.

The leaves of Brugmansia suaveolens are green, deciduous, alternate, petiolate (up to 12.2 cm long) and simple, ovate-lanceolate. It is up to 25 cm long and 15.2 cm wide, and even larger when grown in the shade, with entire or slightly undulate margin, acute-acuminate apex, asymmetric and cuneate base. The lower surface is more covered by multicellular trichomes mostly on main veins, and pale green than the upper one. 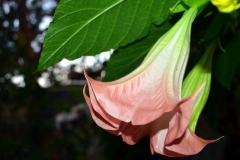 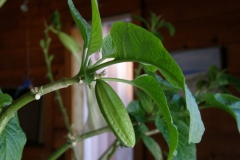 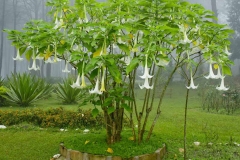 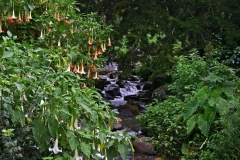 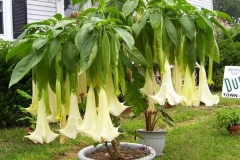 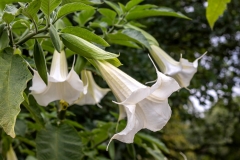 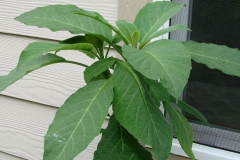 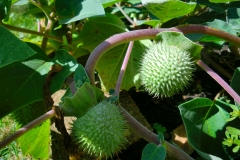 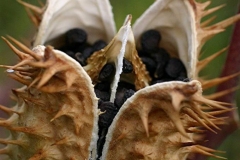 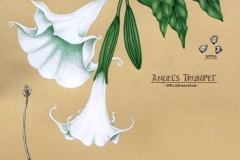 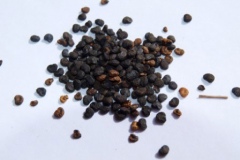 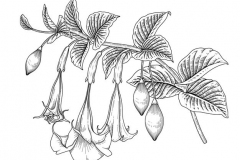 The plant produces pendulous trumpet-shaped flowers that are highly distinctive. The flowers can be white, cream, yellow and pale orange or even pale pink in some varieties and are pendulous, hanging almost straight down. The flowers are remarkably beautiful, sweetly fragrant and about 30 cm long. The corolla has five points that are slightly recurved. The stamens are included in the corolla, have the filaments adnate to the corolla tube, the anthers basifixed and adherent between them, forming a short sheath around the style. The ovary is 2-locular, ca. 5.0 × 1.5 mm, with a style 21.0–25.5 cm long and stigma elongate. Angel trumpet produces both single and double-flowered blooms.

Fertile flowers are followed by smooth, 4-valved, indehiscent, lanceolate-ellipsoid, fusiform, berry-like capsule. It is 2.5 to 3.5 inches long with a round to egg-shaped appearance. Seeds are numerous, compressed, unevenly shaped, coarsely rugose-tuberculate, 4 mm long and 6 mm wide.

Angel’s trumpet is unsafe for anyone to use, but some people have extra reasons not to use it:

Large areas of B. suaveolens infestation are controlled by cultivation when weeds are at the seedling stage. Cultivation becomes less effective as plants mature because stems become woodier and roots may not be completely severed. Seedlings emerge over a long period of time, so repeated cultivations may be necessary to reduce the level of infestation. However, tillage may promote seed survival as seeds decay more rapidly on the soil surface than when buried, and there is greater loss of seed to predators under no-till than conventional tillage systems.

Isolated plants of Brugmansia and Datura species should be hand-pulled before they set seed. Navie reports that individual plants can be manually removed with the aid of suitable tools, but care must be taken to remove the crown as plants may regrow from the base.

Herbicides used to control Datura species may be suitable for Brugmansia. Parsons and Cuthbertson (2001) report that Datura can be controlled with 2, 4-D at the seedling and young growth stages, but plants become resistant as they mature. Other effective non-selective herbicides include atrazine, diquat and glyphosate. The following herbicides have been used to control Datura in crops: bentazone in soybeans and groundnuts; 2, 4-DB in certain varieties of groundnut; dicamba in grain sorghum and maize; and picloram + 2, 4-D in summer cereals. However, some of these products should not be used near waterways, and in such situations a basal bark or cut stump application of an aquatically registered formulation of glyphosate is suggested.