Trending
You are at:Home»Herbs and Spices»Facts and Benefits of Angostura 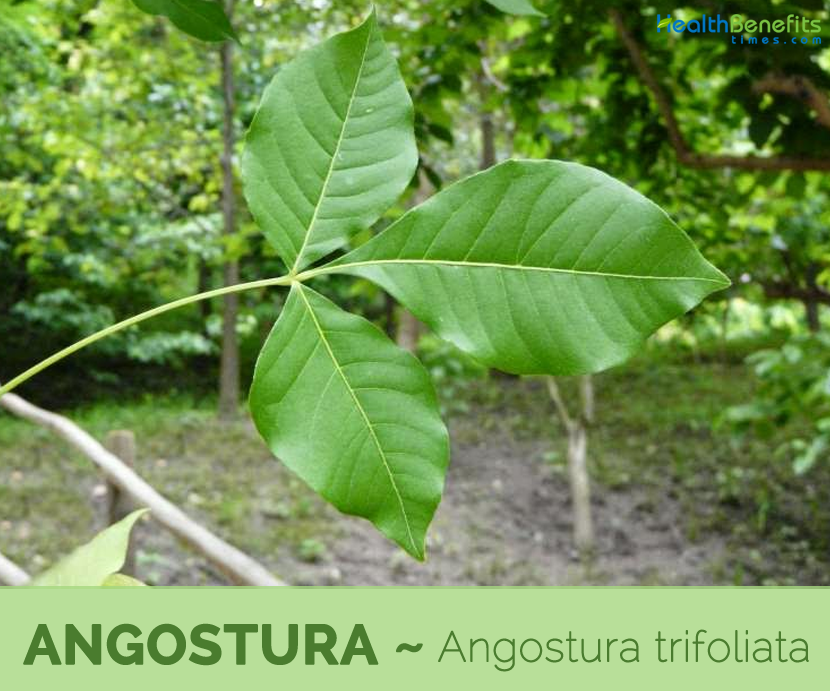 Angostura is an ambiguous tree or shrub which grows between 10 meters and 20 meters in height.  The plant has straight stem irregularly branched, covered with smooth plenteous chunky external grey bark. The outer layer of bark is a yellowish grey cork which is easily removed, often being soft, the inner surface is lighter brown and sometimes laminated, fracture short and resinous white, points being visible on broken surface; the transverse section shows numerous cells filled with circular crystals of Calcium Oxalate, small oil glands, small groups of bast fibers with a musty smell and bitter taste.

Leaves are alternate, petiolate and composed of three leaflets oblong and pointed, smooth, glossy and vivid green, sometimes with small white spots on them and in their first state having a tobacco-like aroma, this odor is one of the characteristics distinguishing the true Angostura from the false which is odorless.

Flowers have salver-shaped corollas and arranged in axillary, terminal, peduncled racemes. The flowers also have a peculiar nauseous smell. Fruit is a 5-celled seed capsule, two or three of which are often unsuccessful; two seeds in each capsule, round and black, one only is normally fertile.

Angostura plant has widely been used by the natives of those regions to treat a varied number of health ailments. Bark of this plant is highly effective in cure of fever and diarrhea. Its bark has got amazing soothing and anti-inflammatory properties that are useful in providing quick and safe recovery from numbness, palsy and tremors. Besides this, the decoction made using the bark helps in improving appetite, assisting in digestion, weight loss and alleviating stomach pain. Listed below are some of the well-known health benefits of using Angostura plant

Strong decoction of the bark of Angostura helps to treat recurrent and whooping coughs along with certain problems related to the human pulmonary system.

Antispasmodic properties of this plant make Angostura very useful in treating disorders caused due to weak digestive system such as Irritable Bowel Syndrome and Crohn’s disease. The plant helps to improve digestion, metabolism and is successful cure of these diseases.

With the help of perspiration and urination, excess of water is removed from the body which solves the problem of water retention in the body. This also helps in efficient weight management of a person.

Angostura is known as a diuretic that helps to increase perspiration and urination in a person. By both these actions toxins gets expelled from the body efficiently and effectively.

Due to the presence of two important chemical compounds angosturin and galipine, the bark of Angostura displays useful anti-tuberculosis qualities. This property is used for natural, safe and permanent treatment of life threatening disease – Tuberculosis

Angostura indirectly impacts your skin by making it flawless and blemish free naturally. By efficient detoxification of the toxins in the form of perspiration and urination, it gives one smooth and spotless and beautiful skin easily.

Bark of Angostura is found to be very effective on the nerves of the spine. It is used in helping people with minor to chronic paralytic problems.

Angostura aids in stimulating blood circulation in the body so that each and every cell of the body receives enough amount of nutrition and stays healthy.

Angostura helps in eliminate toxins from the body in the form of perspiration and regular elimination of bowel from the body. This flushes out the harmful toxins and pathogens from the body which are the reason behind various external and internal health issues.

Angostura is found very effective in preventing the reoccurrence of malaria in a person. It powerfully fights against the causes leading towards this problem and difficult symptoms in an effective manner.

Angostura stimulates the health of hair by encouraging outward circulation of blood. This encourages the flow of blood to the scalp and also supplies large amounts of nutrients to the scalp and hair follicles. On getting sufficient quantity of oxygen and nutrients your hair becomes strong, vitalized and healthy.

Traditional Uses and benefits of Angostura