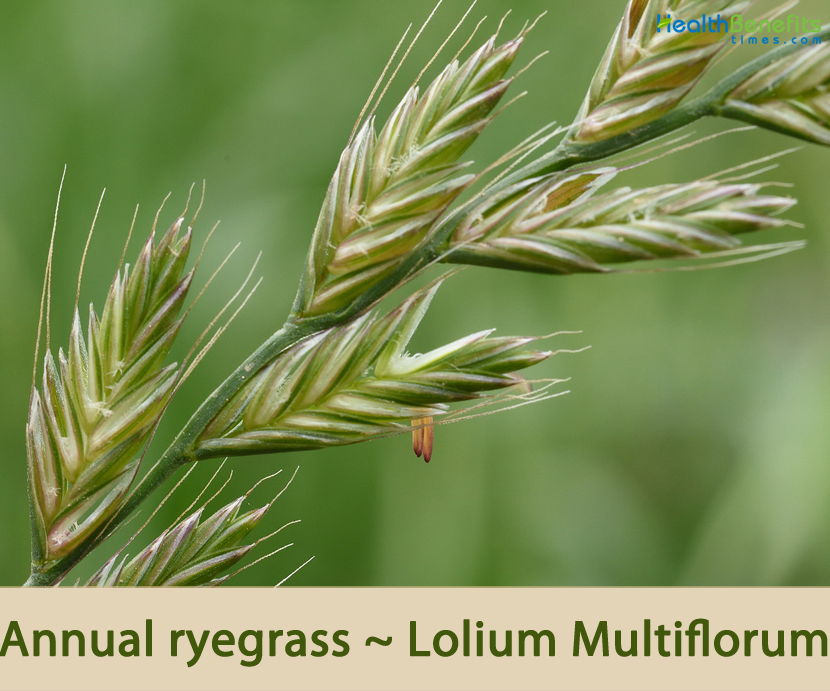 It is a perennial grass that is grown for silage, and as a cover crop. It is also grown as an ornamental grass. It has been cultivated and naturalized around the world to help stabilize soils and prevent erosion. However, in fertile soils it can out compete rarer grasses and has spread to waste areas alongside. It readily naturalizes in temperate climates, and can become a noxious weed in arable areas and an invasive species in native habitats. It is a host plant to wheat yellow leaf virus in its native Europe. It is sometimes considered a subspecies of perennial ryegrass. It differs from L. perenne in its spikelet, which has a long bristle at the top, and its stem, which is round rather than folded.

Annual ryegrass is a short, rhizomatous, fast-growing, herbaceous annual, biennial, or perennial cool-season grass that normally grows about 3–4 ft. (90– 120 cm) tall.  The plant is found growing in mesic to moist pastures, grasslands, cultivated fields, Meadows, field margins, roadsides, fruit orchard, upland crop field, weedy field, waste areas and other disturbed sites. The plant grows on a wide variety of soil types and prefers fertile, well-drained loam or sandy loam soils, but establishes well on many soil types, including poor or rocky soils. It tolerates clay or poorly-drained soils in a range of climates and will outperform small grains on wet soils. It does not tolerate shade for extended periods. The plants form an extensive, dense root system, even in low fertility and acidic soils, which makes it a good candidate for use for erosion control on sloping fields and grassed waterways.

Alternate leaves are up to 40 cm long and 5-12 mm wide; they are ascending to widely spreading, linear in shape, and rather floppy. The blades are medium green to dark green on both sides, shiny, and hairless. Upper surface is evenly ribbed; lower surface is smooth and shiny.  The base of each blade is wider than the sheath or the culm, around which there extends a pair of auricles. The leaf sheaths are pale green to pale reddish green, hairless, and longitudinally veined. Young leaves are rolled in the bud. Auricles are small and narrow. Ligule is white, translucent, shorter than wide.

At the apex of the culm, there develops a floral spike about 6-10 inches long, consisting of alternate spikelets along the rachis (flowering stalk). These spikelets are located edgewise along the rachis. The culm often undulates from one spikelet to the next. Each spikelet consists of a single outer glume and 8-20 lemmas with florets. In each spikelet, the ascending lemmas are arranged in 2 overlapping ranks. The glume (8-12 mm. in length) is longer than the lemmas, but shorter than length of the spikelet; it is linear-elliptic, convex along its outer surface, where there are 3-5 longitudinal veins.

Each lemma is 6-8 mm. in length, linear-elliptic, and convex along its outer surface, where there are several longitudinal veins. The upper lemmas have awns (shorter than the length of the lemmas), while the lower lemmas frequently lack awns. Each lemma has a single floret with an ovary, 3 stamens, and a pair of feathery stigmata. The blooming period can occur from late spring to fall, but lasts only 2 weeks.

Seeds are relatively flat, 4-6 mm long, 1 mm wide and straw-coloured, with the seed embryo often visible through the outer layers. 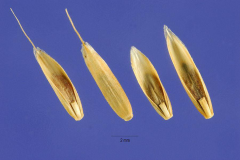 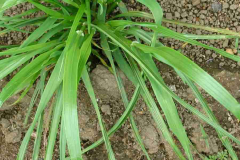 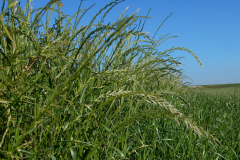 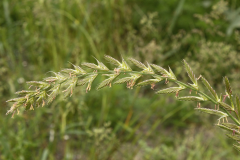 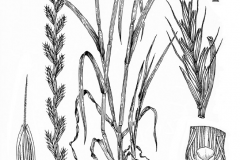 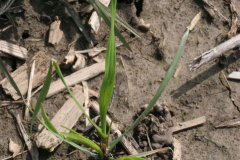 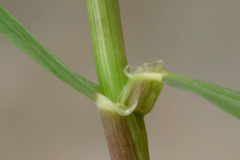 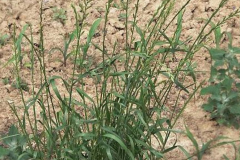 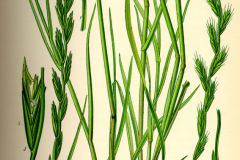 Natural hardpan (fraigpan) or manmade compaction prevents corn and soybean roots from getting deep moisture. These soils are found predominately in southern Ohio, Indiana, Illinois, Kentucky and Missouri. Annual Ryegrass grows through and breaks up hardpan, creating macropore channels that corn and soybean roots follow to reach moisture underneath. It will take approximately 4 years (4-6” fraigpan) of continuous no-till with annual ryegrass each year to achieve this. Planting Annual Ryegrass for as little as 2 years in a row may be as effective as running a ripper. In the long run, a cover crop and no-till is a far better strategy for improving soil health and crop yields than conventional tillage.

Ryegrass has an extensive, soil-holding root system. The cover crop establishes quickly even in poor, rocky or wet soils and tolerates some flooding once established. It’s well-suited for field strips, grass waterways or exposed areas.

A high N user, ryegrass can capture leftover N and reduce nitrate leaching over winter. Provided it survives the winter, its extensive, fibrous root system can take up as much as 43 lb. N/A, a University of California study showed. It took up about 60 lb. N/A by mid-May following corn in a Maryland study. Cereal rye scavenged the same amount of N by mid-April on this silt loam soil. Ryegrass works well ahead of no-till corn or soybeans in the Corn Belt, sometimes winterkilling, or spray it for weed-controlling mulch.

Growers applying manure are being required to apply manure in a more environmentally friendly fashion. Using Annual Ryegrass could help keep the nitrogen in the soil profile and available for the crop the following year.

When a grower changes to no-till or acquires a farm that is new to no-till, it commonly takes up to 5 years for key soil properties (aggregate stability, organic matter, increased infiltration, pore space, fungi, etc.) to occur. Adding Annual Ryegrass can reduce this transition period by half.

Ryegrass helps slow growing; fall-seeded legumes establish and overwinter in the northern U.S., even if the ryegrass winterkills. It tends to out compete legumes in the South, although low N fertility favors the legume.

Mixed with legumes or grasses, annual ryegrass usually establishes first and improves early-season weed control. With adequate moisture, it serves well in Hardiness Zone 6 and warmer as living mulch in high-value systems where you can mow it regularly. It may winterkill elsewhere, particularly without protective snow cover during prolonged cold snaps. Even so, its quick establishment in fall still would provide excellent, winterkilled mulch for early-spring weed suppression.

Soybean cyst nematodes results in lower soybean yield. Research studies indicate that Annual Ryegrass can (with at least 40 days growing with the soil temperature about 50 degrees) stimulate cyst eggs to hatch in the fall. This results in a very low count, if not elimination, of the nematodes the following year. Fields in the southern half of Illinois, Indiana, Ohio, and Missouri are likely places to benefit, since odds are good that they satisfy the environmental conditions.

Ryegrass is very palatable forage. You can extend the grazing period in late fall and early spring by letting livestock graze cover crops of ryegrass or a ryegrass-based mix. Annual ryegrass can be used as emergency forage if alfalfa winterkills. It establishes quickly and produces a lot of forage in a short amount of time.

Control of established plants by mechanical or hand weeding will only be effective if complete removal from the soil is achieved, preventing subsequent regrowth. This is generally impractical, although cultivation is able to successfully control small and recently emerged seedlings. In competition experiments between wheat and L. multiflorum, the yield of wheat was increased at higher N fertilizer rates, and when crop density was increased. Cross-sowing of wheat is not an effective means of controlling L. multiflorum.

In trials in Argentina, pre-emergence applications of trifluralin gave effective control of L. multiflorum, and resulted in increased yield of barley. Clodinafop is recommended for the control of Italian ryegrass up to the three tiller stage and, in trials in Chile, gave good control of a range of annual grass weeds including L. multiflorum only when sprayed at an early growth stage. Oxyfluorfen applied to broccoli crops in autumn gave 69-97% control in the USA. Post-emergence application of metribuzin at the two leaf stage gave good control of L. multiflorum in wheat in Mississippi, USA. In South Africa, 80% control was achieved using triasulfuron in wheat and barley. Propyzamide, fluazifop, chlorsulfuron applied pre-emergence in wheat and haloxyfop-ethoxyethyl have all been used successfully to control L. multiflorum. Mamarot and Rodriguez give recommendations for herbicide use against Lolium spp. in a range of crops, for example, EPTC and atrazine in maize; carbetamide in legumes, rape and sunflower; monolinuron in potato; and a wide range of herbicides related to sethoxydim and fluazifop in broad-leaved crops. In Australia, glyphosate and/or paraquat-based herbicides are used for control of Lolium spp. prior to crop sowing.

Biotypes of L. multiflorum with evolved resistance to herbicides have been reported in Brazil, Chile, France, Italy, the UK and USA. In the UK, seeds were collected from fields in which diclofop-methyl had failed to control the grass. Glasshouse trials were performed on these accessions to determine their susceptibility to various herbicide treatments. Resistance to diclofop-methyl, fenoxaprop and fluazifop was detected, with some evidence of resistance to traloxydim and partial resistance to isoproturon. Diclofop resistance has also been reported in biotypes from wheat fields in Oregon, USA. These biotypes were susceptible to pre-emergence tri-allate + diuron or post-emergent applications of metribuzin and these have been recommended as alternatives for the control of L. multiflorum. Sulfometuron-resistant biotypes have been reported in Mississippi, USA.

The potential for biological control of L. multiflorum as a weed has not been investigated due to the economic importance of this species as a forage grass.