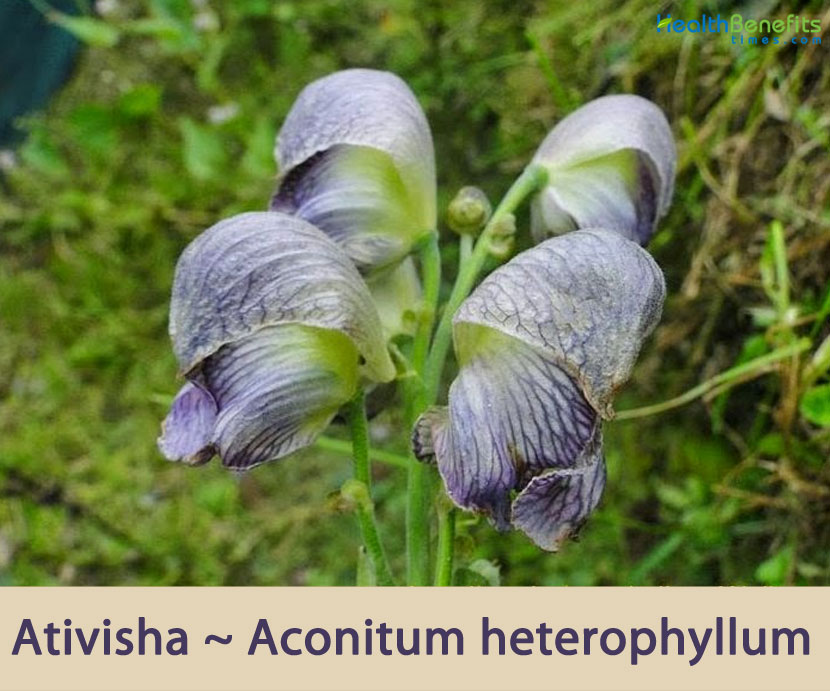 Aconitum heterophyllum commonly known as Ativisha, Indian Atis, Atis, and Atees is an herbaceous perennial plant belonging to Buttercup family (Ranunculaceae). The plant is native to Western Himalayas and occurs in the alpine Himalayas of Sikkim, Nepal and adjoining parts of southern Tibet also from Kashmir to the Kumaun hills at altitudes of 2500-3900 meters. Popular common names of the plant are Himalayan monkshood, Monk’s hood, Indian atees, Ativisha and Aruna. Apart from that it is also known as Shuklakanda, Bhangura, Ghunavallabha, Ghunapriya, Kaashmira, Vira, Visha, and Shishubhaishajya in Ayurveda. The root and tuber of the plant are used in internal prescriptions for fevers, rheumatic conditions and for loss of vitality.

Ativisha is an herbaceous perennial plant that normally grows about 15 – 90 cm tall, occasionally reaching 200 cm tall. The plant is found growing in alpine to sub-alpine open slopes, common on grassy meadows, upper oak/coniferous forest, also glacial riverine, rocky moist areas, alpine dry scrub, open grass and shady moist alpine slopes. Sandy loam and slightly acidic soil, with pH about 6, has been found to be the best for the proper growth of the plant.

The plant roots are tuberous and paired. The shape of the roots is conical or cylindrical, about 2 – 7.5 cm long (maximum) and 0.4 – 1.6 cm thick (maximum). When the plant starts tapering to end, the thickness is gradually reduced. The color of the roots is yellowish and greyish white externally. The scars of fallen rootlets and with a rosette of rudimentary leaves form a wrinkle marks in the external surface.  The roots are starchy and white with a surface pointed to the center with 4 – 7 yellowish to brown dots arranged concentrically, towards the end of fibro-vascular bundles. It is odorless, bitter and has no tingling sensation.

Stem erect, leafy, 1-3ft., simple or rarely branched from the base, glabrous below and puberulous above.

Leaves are ovate-heart-shaped to rounded, usually 5-10 cm in length, sharply toothed but largely heteromorphous, the upper clasping the stem. All leaves have large rounded teeth. Lowest leaves are deeply lobed and long-stalked.

The flowers are hooded, large, and white to violet colored. They are present in lax leafy panicles or slender racemes with very variable bracts which are either small linear, small ovate, or large ovate. It has hairy corolla. Carpels are five in number, containing 10–18 follicles. Flowering and fruiting occur from August to October in the third year of growth.

Fertile flowers are followed by seedpods that are 16-18 mm long, shortly hairy and erect. 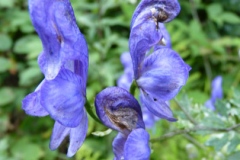 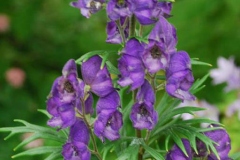 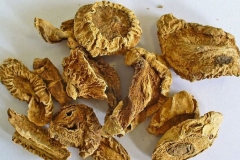 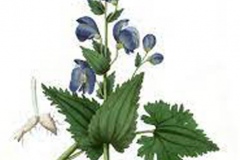 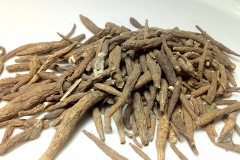 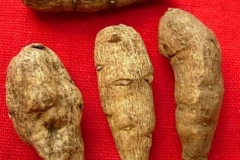 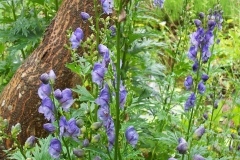 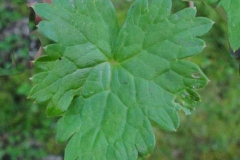 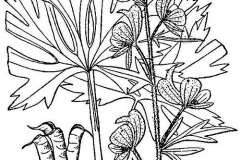 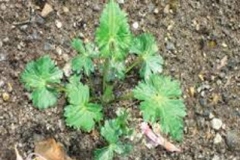 Ativisha has antidiarrheal action. It acts as an absorbent, which reduces the liquid content of the stool and binds the stool. Additionally, it decreases the frequency of the loose stools. For this, it is commonly used along with nutgrass and dried ginger powders. Pulverized Ativisha can be consumed three to four times a day with a minimum of two to three hours to treat fever.

Ativisha powder should be mixed in Basil Leaf Juice and honey. It can be given to children for treating common cold and infections of upper respiratory tract. This mixture gives relief from nasal blockage, running nose, fever, sneezing and nasal irritation. It also prevents secondary infections.

Ativisha powder along with Pistacia Integerrima and honey helps to treat bronchitis and cough. It helps to clear the lungs, reduces inflammation and modulates the mucus secretions. The root bark powder of Ativisha can be given to patients particularly children to provide relief from cough, nasal blockage, running nose, sneezing, and nasal irritation.

Ativisha has stomachic, digestive, and metabolism enhancer actions, which encourages digestion and metabolism. Ativisha helps to digest food and promotes a proper assimilation of the foods, which helps to treat mal-absorption syndrome.

Decoctions of Ativisha, dry ginger, Cyperus Rotundus, and Tinospora cordifolium can be eaten together to digest all the undigested food you had, and it gives you better relief. Sometimes the food we consumed would not digest because of low digestive fire that develops the Ama formations, which means the toxic and it leads to ingestion. Ativisha helps to digest the toxins with its digestion and appetizer properties.

Ativisha is an excellent herb for general detoxification of the body. Root powder can be given to children for clearing out worms in the body. It can also detoxify the blood and improves immunity.

According to Ayurveda, vomiting occurs when the three doshas are imbalanced, particularly Pitta and Kapha. The imbalance is caused by improper eating habits and eating excessive foods such as sour, cold diet, raw or uncooked food, heavy diet, pungent, sharp, and cause burning sensation.

These habits lead to toxic due to improper digestion formation in the body and cause indigestion. As Ativisha has digestive properties, it helps digest the foods that created Ama and caused vomiting and give you complete relief from the conditions. The balancing properties of Ativisha such as appetizer, digestion, and Tridoshas called Vata, Pitta, and Kapha are the reasons for this effect.

Because of the inactive lifestyle we are living today, Piles become the most common issue developed due to chronic constipation. When Vata dosha becomes imbalanced in the body, constipation is created.

Powder of Ativisha root, fruit rind of chebulic myrobalan, rhizome of the sweet flag, leadwort root, fruit of Piper longum, salt of sodium & potassium, and costus rhizome are mixed and consumed with warm water two times a day at 3 to 6 grams as dose.

Decoction extracted from an equal amount of roots of Ativisha, Ashwagandha, Musli, Guduchi (stem), and Atibala can be taken a day thrice as a dose of 14 – 28 ml for parotitis and mumps.

Half teaspoon of dried and powdered mixture of roots of Ativisha, leaves of Ajuga parviflora, and roots of Podophyllum hexandrum is given two times a day in early morning and night after food for three months as a carminative and to treat diabetes and leucorrhoea.

Traditional uses and benefits of Ativisha

Consumption: Two times a day with honey after food