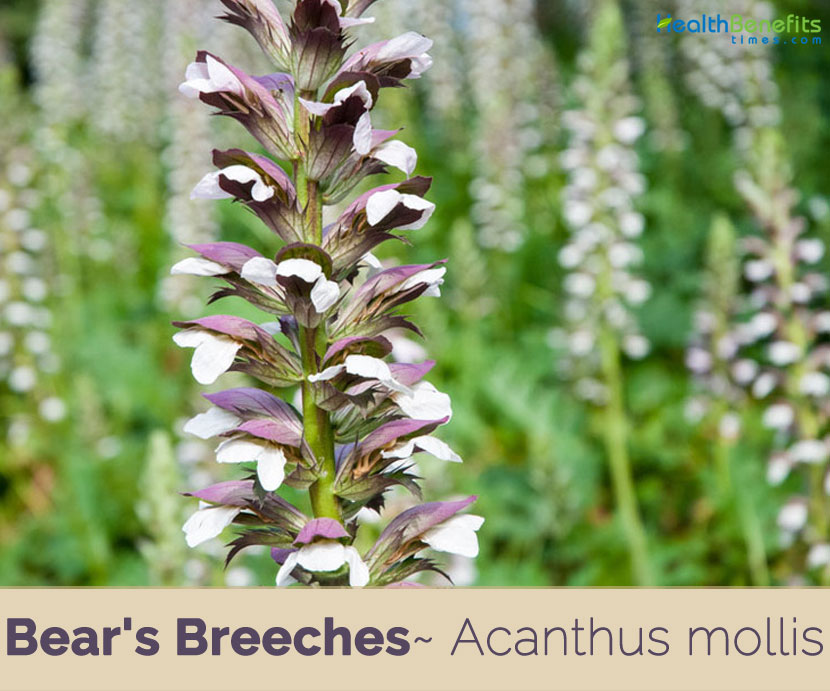 Bear’s breeches scientifically known as Acanthus mollis, commonly known as sea dock, bearsfoot or oyster plant, is an herbaceous perennial plant with an underground rhizome in the genus Acanthus. It is regarded as an invasive species in some jurisdictions. For centuries, stone or bronze stylized versions of acanthus leaves have appeared as decoration on certain styles of architecture and furniture. The plant is native to southern Europe, Morocco, Tunisia, Algeria, and the Mediterranean islands, Turkey, Syria and the Canary Islands. Most of the lands where this flower grows are the wild lands. Apart from bear’s breeches it is also known as Artists’ acanthus, Bearsfoot, Brank-ursin, Greek acanthos, Oak-leaf bear’s-breeches, Oyster plant, Sea-dock, Sea-holly, bear’s breech, common acanthus, acanthus and soft-leaved bear’s breeches. The plant is officially the national flower of Greece.

The name of the genus derives from the Greek name of the plant ἄκανθος ákanthos; it was imitated in Corinthian capitals. This ἄκανθος ákanthos is related to ἄκανθα ákantha meaning “thorn” referring to the thorn-bearing sepals, or any thorny or prickly plant in Greek. The Latin name of the species, mollis meaning “soft, smooth”, refers to the texture of the leaves. Acanthus leaves have a classical appearance and were the source of the Corinthian leaf motif developed and used as a decoration in ancient Greek and Roman art and architecture. It is believed that the leaves of A. mollis or A. spinosis were the model for the sculptured leaves that adorn the capitals of the Corinthian columns that became popular in the 4th century B.C.

Bear’s Breeches are a clump-forming, rhizomatous, perennial herb that grows up to 30–80 cm (12–31 in) of height, with a maximum of 180 cm (71 in). The plant is found growing in woodland scrub, stony hillsides, waste land, roadsides, railway banks, coastal areas, disturbed areas, forests, riparian zones, scrublands and urban areas, coastland and ruderal/disturbed. It can grow in a variety of soil types, including clay, and those that are dry and sandy. It prefers light to medium soil types. Leaves are borne on petioles up to 50 cm long and are about 30 cm long and   50 cm wide, hairless, and with deeply pinnate lobes that are acutely toothed.

Inflorescence is a cylindrical spike 30–40 cm (12–16 in) long and can produce up to 120 flowers. Flowers are tubular, whitish, and lilac or rose in color. Each flower is up to 5 cm (2.0 in) long and it is surrounded by three green or purplish bracts. The central bract is spiny and larger than the other two. The calyx has two lips: the upper is purple on top, rather long and forms a kind of “helmet” on top of the corolla. The corolla is reduced to a white lower lip, trilobed, with purple-pink venation. The four stamens are fused to the corolla and look like tiny brushes. Flowering normally takes place from June to August. Fertile flowers are followed by an ovoid capsule containing two to four large black seeds. 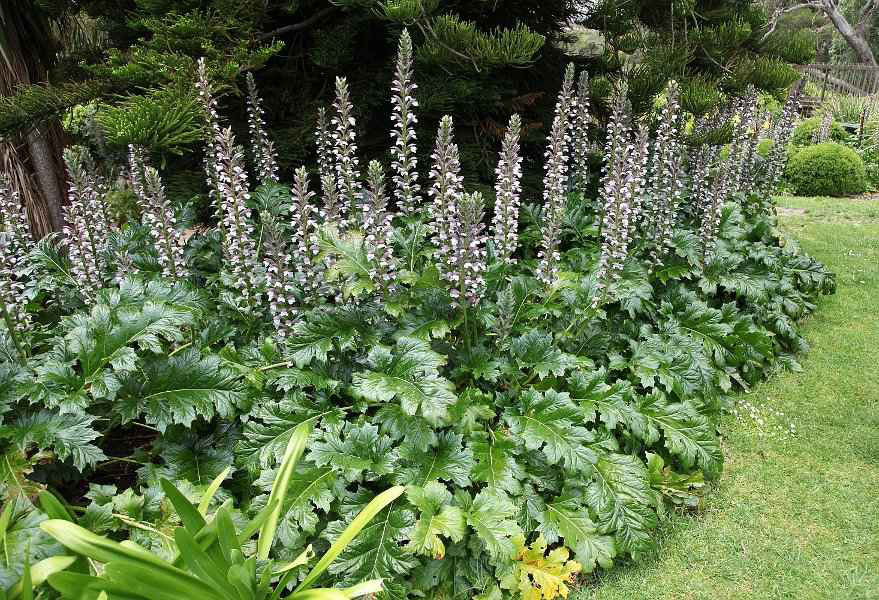 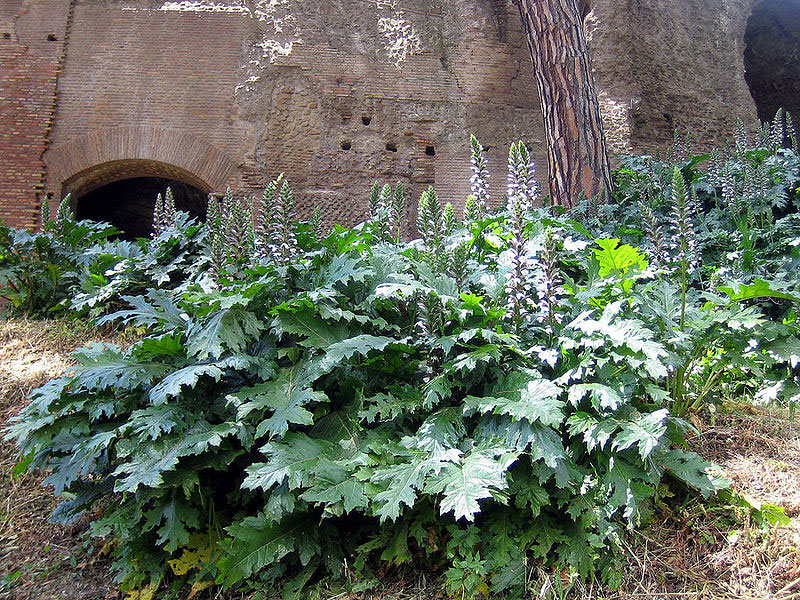 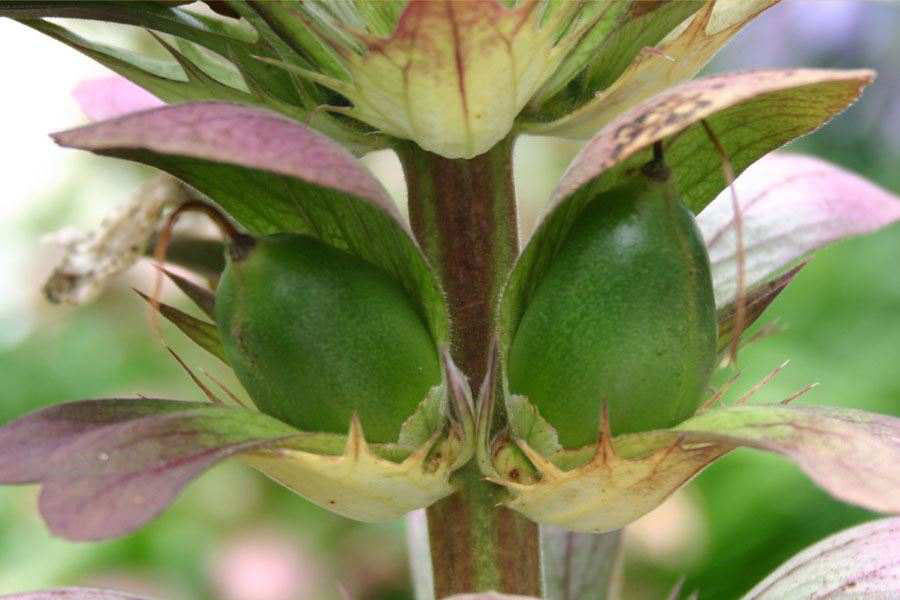 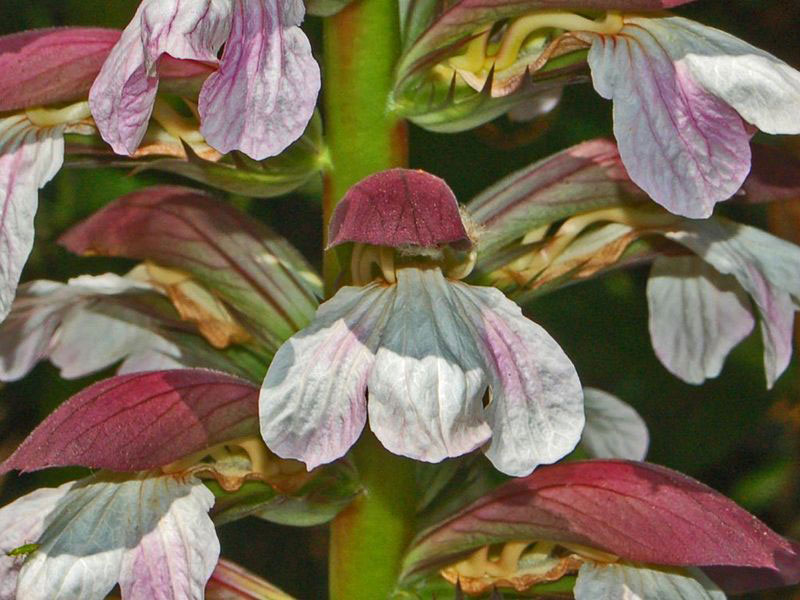 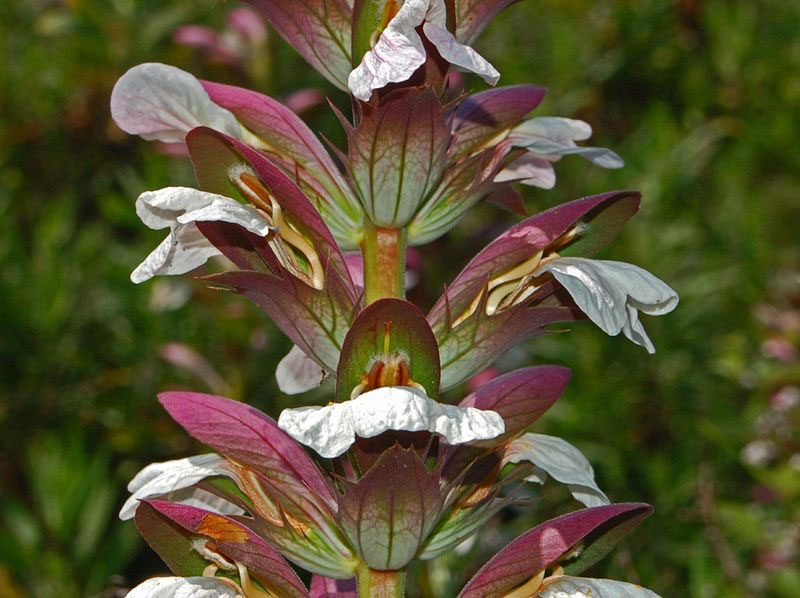 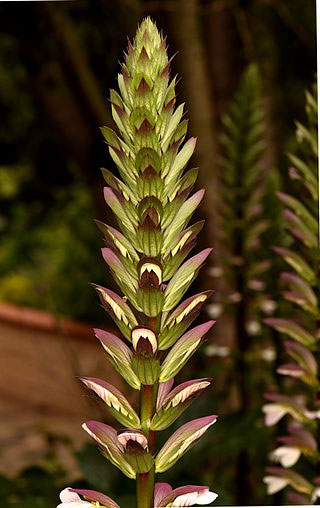 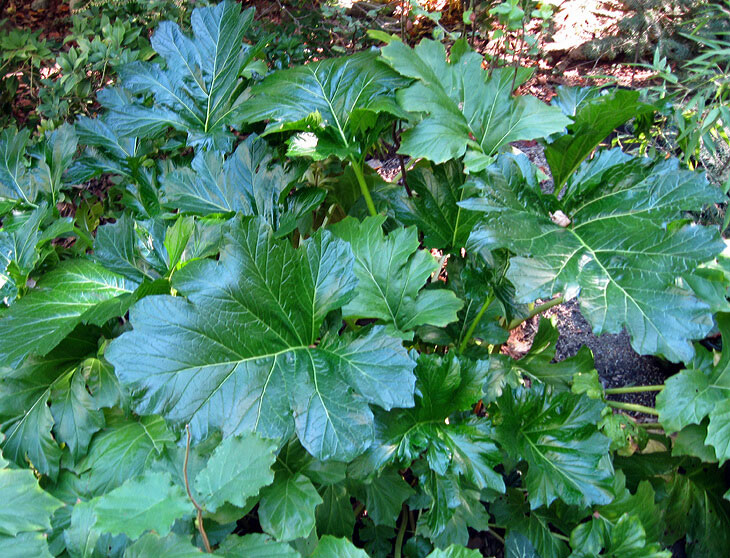 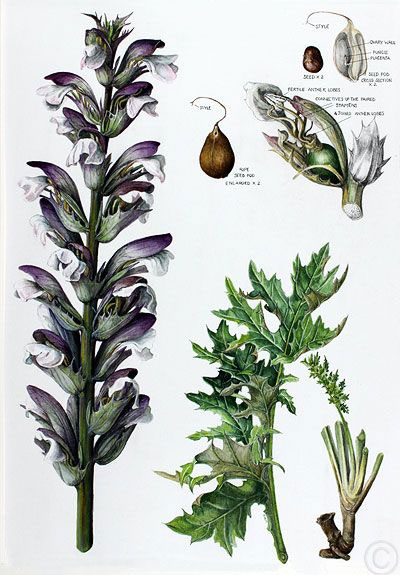 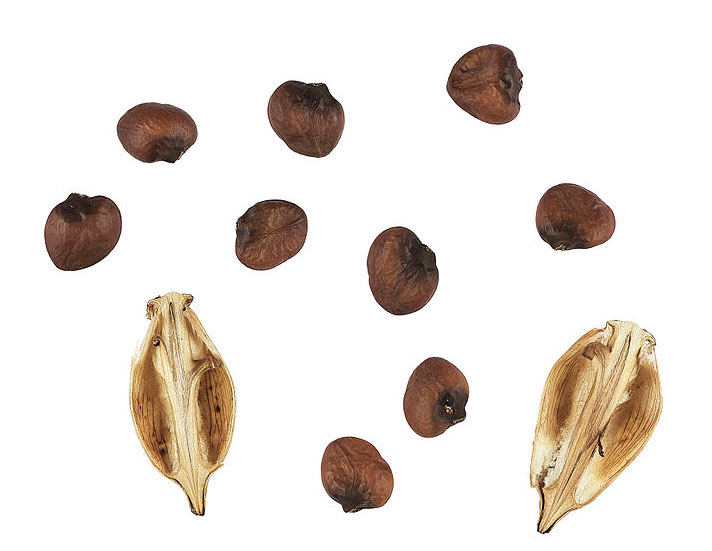 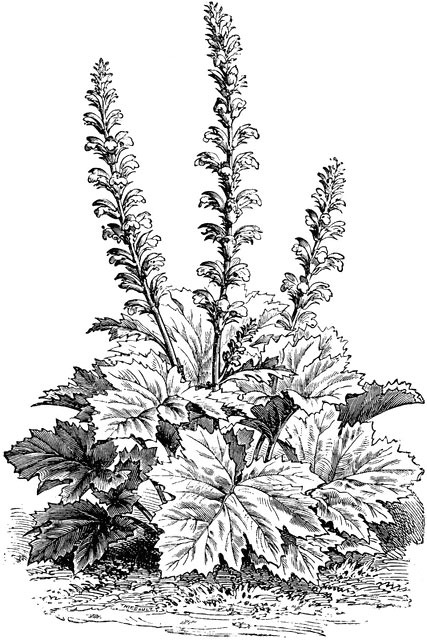 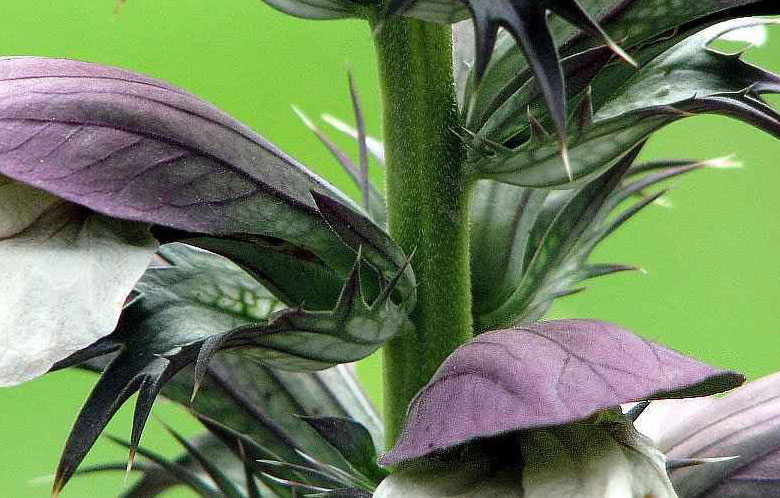 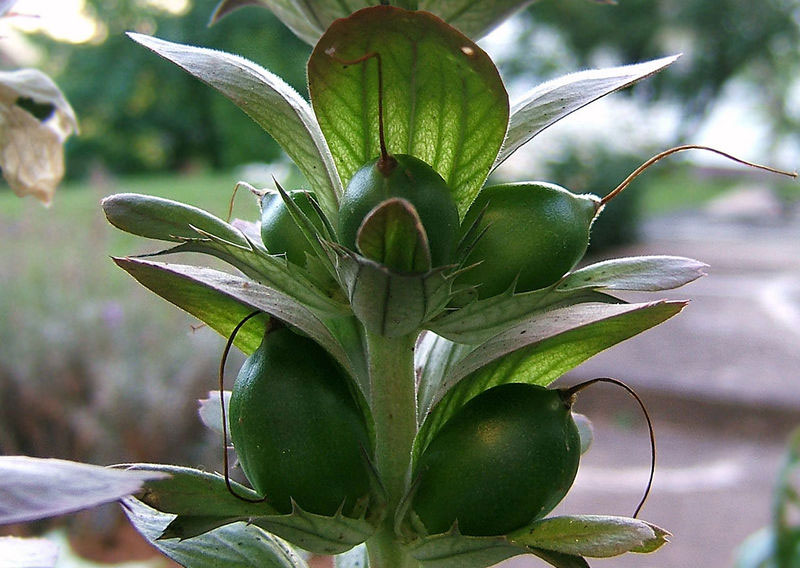 Acanthus mollis Common Bear’s Breeches: This is the most popular species, but it can also be the most temperamental about blooming, with buds being damaged by late spring frosts.

Acanthus. Spinosus Spiny Bear’s Breeches: This is more adaptable than A. mollis and more thistle-like.