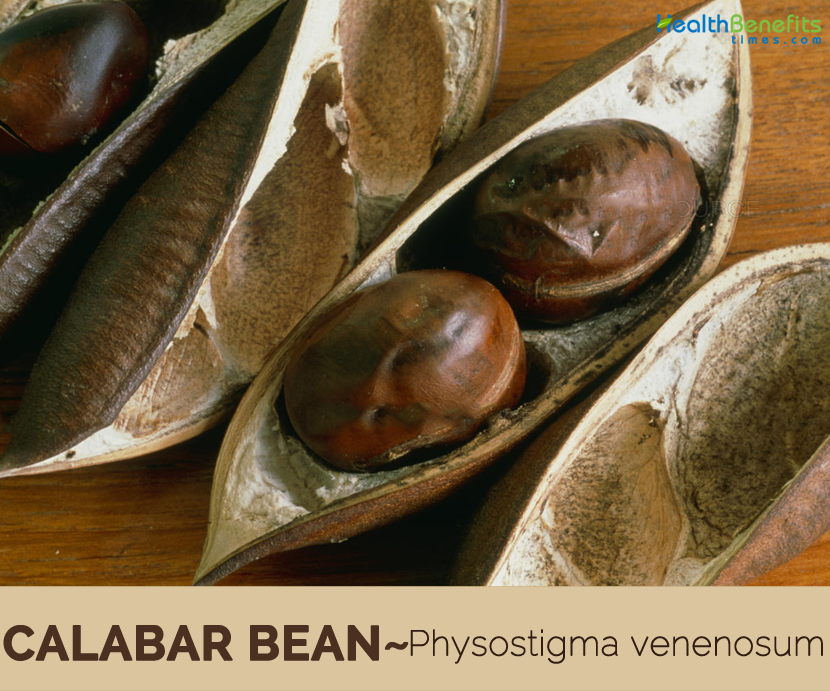 Physostigma venenosum with many common names including Calabar bean, physostigma, ordeal bean, chop nut, esere nut, faba calabarica, Fève of Calabar, Jewish de l’Ordalie, Legume and Physostigma is a large, evergreen climbing perennial native to West Africa, especially southeastern Nigeria and is cultivated in India and parts of South America. It is a dark brown, kidney shaped seed of a leguminous plant often considered poisonous to humans. It derives the first part of its scientific name from a curious beak-like appendage at the end of the stigma, in the center of the flower; this appendage, though solid, was supposed to be hollow (hence the name from φῦσα, a bladder, and stigma). Seeds are toxic to humans and prove fatal most of the times.

Calabar bean is a large, evergreen, herbaceous, scrambling or climbing perennial with the stem woody at the base, up to 2 inches (5 cm) in diameter. The plant is found growing in closed rain-forests, primary and secondary, dry and wet; riparian seasonally flooded forest and marshes. The plant has a habit like the scarlet runner, and attains a height of about 50 feet (15 m) climbing high among the trees. The plant has large, pinnate, trifoliate leaves. The flowers, resting on axillary peduncles, are large, about an inch long, grouped in pendulous, fascicled racemes pale-pink or purplish, and beautifully veined. The fruit is a dark brown pod that grows to about 6 or 7 inches (15 or 18 cm) in length. Each pod contains from 2 to 3 seeds. The dark brown or blackish kidney-shaped seeds are about 2.5 cm long and have an extremely hard shell. They are rounded at the ends, uneven and somewhat polished with the hilum extending along the whole convex side. The cotyledons are whitish.

This plant is native to an area of Africa around Nigeria once known as Calabar. The plant is widely known in Africa because the seeds had been used as an “ordeal poison” to determine if a person was a witch or controlled by evil spirits. When used for this purpose, the victim was made to ingest several beans; if the person vomited the beans and survived the “ordeal,” his innocence was declared. Western settlers who were captured by native tribes and who underwent the “ordeal” soon learned not to chew the bean, but to swallow the kidney-shaped bean intact, thus not permitting the release of the toxic constituents. The plant has been long recognized as a commercial source of the alkaloid physostigmine, first isolated in 1864.

The dose for calabar bean may be different for every patient. The dose that you take depends on your age, health, and several other conditions. Herbs are not always safe. Please discuss with your herbalist or doctor for your appropriate dosage. Since the herb is considered toxic used very carefully and minor doses.