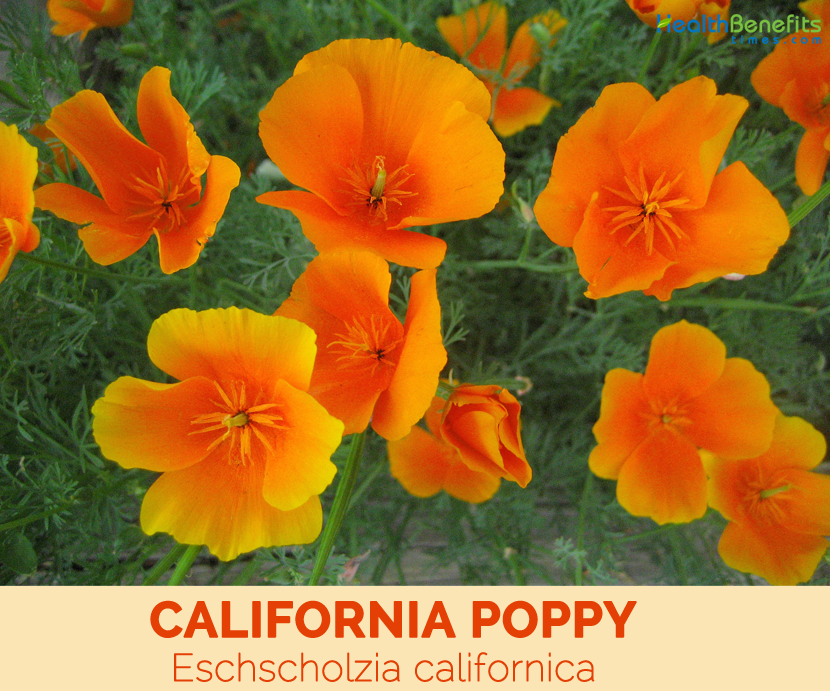 Eschscholzia californica commonly known as California poppy, Californian poppy, golden poppy, California sunlight, golden cup, flame flower, la amapola, and copa de oro (cup of gold) is a species of flowering plant in the family Papaveraceae and is native to hillsides, roads and open areas of California but is found along the entire western coast of the United States as far north as Washington state and as far south as Mexico. It is an ornamental plant flowering in summer with showy cup shaped flowers in brilliant shades of orange; yellow and red (occasionally pink). It is also used medicinally and in cooking. It became the official state flower of California in 1903. Genus name honors Johann Friedrich Eschscholtz (1793-1831) of Tartu (Dorpat), Estonia, who attended Otto von Kotzebue on his first expedition around the world (1815-1818). Specific epithet means of California. The flower is usually golden orange, hence its common name “golden poppy.”

California poppy is a perennial or annual plant that grows about 5–60 in (13–152 cm) tall. The plant is found growing in open, well drained areas, in grasslands in deserts, and from valleys to foothills. The plant normally thrives well even in sandy, poor soils, with proper drainage. Plant has alternately branching glaucous blue-green foliage. The leaves are alternately divided into round, lobed segments.  The bright yellow-to-orange flowers are solitary, axillary and long-pedicled. They are 2.5 to 4 cm in diameter with a cup-shaped receptacle. The sepals are fused. Four crenate petals, orange-red at the base, form an open dish. The stigma is thread-like. There are numerous yellow stamens. Flower color ranges from yellow to orange, with flowering from February to September. The petals close at night or in cold, windy weather and open again the following morning, although they may remain closed in cloudy or rainy weather.

The fruit of the California poppy is a narrow; dehiscentes (burst, naturally) capsule is anything between 3 cm and 9 cm (about 1.2 inches and 3.5 inches) in length. The natural fruit splits open into two and release several small seeds that can be black or dark brown in color. California poppy has the ability to stay alive in mild winter (depending on your range). California poppy withers completely when weather conditions become very cold. Plant foliage turns straw-brown after flowering. Cultivars are available in semi-double to double forms in additional colors including white, pink, red, lilac and purple.

The California poppy (Eschscholzia californica) is both an annual and perennial.  It is often yellow though most people are more familiar with the orange ones.  Here are the different subspecies and varieties

California poppy is a beneficial herb which is commonly used for depression, long-term mental and physical tiredness (neurasthenia), nerve pain, various psychiatric conditions, blood vessel problems, sensitivity to weather changes, and sedation. While California poppy seed acts as a pain reliever, it also has other health benefits. Listed below are few of the health benefits

Many people use California poppy seed as a natural sleep inducer. They report that it works as soon as you take it and can bring restful, refreshing sleep for people who suffer from insomnia.

Due to the sedative effects of this poppy, many use it to treat anxiety or tension. It’s also been used to help treat incontinence in people who have trouble with it during high levels of stress.

Since it is natural, with no known side effects, it’s an effective and safe anti-anxiety remedy for children. Those with behavioral problems, such as ADD or ADHD have found the California Poppy Seed to be just as effective as the prescription medication they take for their disorder.

Elderly people can also benefit from this natural remedy. It can improve the intellectual capacity for those suffering from memory or concentration issues due to aging.

Due to the antimicrobial properties of the California poppy seed extract, the tincture can be applied directly to cuts and scrapes to help decrease the risk of infection and speed up healing.

How to Consume California poppy

California poppy has not known culinary uses. However, remedies are made from the aerial parts of the plant. They are largely used for promoting relaxation and sleep.

If you decide to go ahead with California poppy in your daily diet, be sure to talk with your physician first. After talking with your healthcare professional, they may decide you can take California poppy for pain or other reasons. The dosage and guidelines might look something like this:

If you choose to take the herb in dried form, you can also get your California poppy by way of a nice cup of tea.

Again, even though the plant is considered to be relatively safe with little or no documented side effects, it is important to consult a physician before introducing it to your habits. It is also cautioned that pregnant or breast-feeding woman do not take California poppy in any form