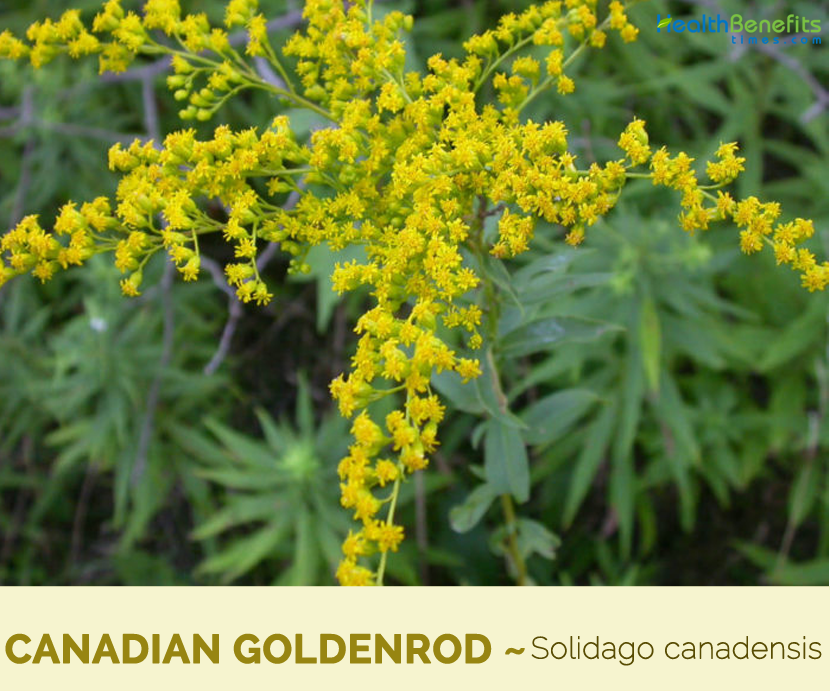 Solidago canadensis commonly known as Canadian goldenrod is an herbaceous perennial plant of the family Asteraceae (Aster family) native to northeastern and north-central North America but established as an invasive plant in many other regions. Some other popular common names of the herb are Canada Goldenrod, Giant Goldenrod, Tall Goldenrod, common goldenrod, Shorthair goldenrod, Harger’s goldenrod and Rough Canada goldenrod. The herb can be found in a variety of habitats, although it is not shade tolerant. It typically is one of the first plants to colonize an area after disturbance and rarely continues once shrubs and trees become established. It is found neither in very dry locations nor in waterlogged ones.

Scientific name of goldenrod, “solidago”, originates from Latin word “solidare” which means “to make whole”. Name refers to the fact that goldenrod has excellent potential to heal the wounds. This plant is also known as woundwort. The “canadensis” part of its name comes from the plant being first identified in Canada. Goldenrods are attractive to bees and butterflies. Goldenrods have been wrongfully accused of causing hay fever which is actually an allergic reaction to wind-borne pollen from other plants such as ragweed. It is often grown as an ornamental in flower gardens.

Canadian goldenrod is an erect, rhizomatous, herbaceous perennial plant that grows about 6 feet (1.8 m) tall.  The plant is found growing in disturbed areas of moist to dry prairies, openings in floodplain and upland forests, infrequently grazed pastures, thickets, savannas, tall grass prairies, limestone glades, and gravel seeps. In more developed areas, it occurs in cultivated and abandoned fields, vacant lots, power-line clearance areas, and along fences, roadsides, and railroads. It can tolerate a fairly wide range of soil fertility and texture conditions, but is typically found in fairly moist soils. It is not found on waterlogged sites and is found only rarely on very dry sites. The plant’s extensive root system is very deep and fibrous with 2- to 5-inch-long rhizomes (horizontal underground stems) emerging at the base of aerial stems.  . The rhizome is cylindrical, noded, diagonally ascending and short. Stem is erect, cane-like, leafy, mostly unbranched, slender, hairless in the lower half, and have small soft hairs in upper half below the flowers. They are usually red tinged beneath, and glabrous to loosely appressed pubescent higher up.

Leaves are alternate along the stem and lance shaped with sharp teeth around the edge. They are hairless on the upper surface, and hairy beneath especially on the veins. Leaves are described as being 3-nerved, meaning the midrib and 2 parallel lateral veins are prominent. Basal leaves form but falls off early leaving only stem leaves that are all nearly the same size. Leaves lack stalks, so bases attach directly to the stem.

Flower heads form in dense, elongated, pyramid-shaped clusters. Each flower head consists of 9 to 17 yellow ray flowers surrounding fewer than 10 yellow disk flowers. Flower heads are less that 1/8-inch wide. The ray florets are narrow, lingual and female. The disc florets are funnel-shaped, 5- tipped and androgynous. The fruit is an achene, which is cylindrical with numerous ribs. It is brown, sparsely pubescent and 3.5 to 4.5 mm long with a tuft of hair which facilitate wind-induced dispersal of seed. The herb is sometimes browsed by deer and is good to fair as food for domestic livestock such as cattle or horses.

The herb is valued in treating various urinary tract disorders and used both for such serious ailments as nephritis or for such common complaints as cystitis. It has also reputedly been used to break down and flush out kidney and bladder stones. Here are some of the benefits that you can expect to receive when you take Canadian Golden Rod:

There are a lot of things that our body needs but does not get. What we place inside our bodies instead are toxins that can cause a wide variety of diseases. Toxins are known to cause different problems throughout the body. To get rid of them competently, there is a need to take in antioxidants. Antioxidants can be found in Canadian goldenrod so taking it can successfully remove the toxins in your body that may cause various forms of diseases.

2. Improve the health of your urinary tract

3. Antidote for certain types of allergies

4. Beneficial for a sore throat

Goldenrod can be a good choice for you if you are suffering from sore throat. It will competently get rid of the mucous that has been stuck in the lungs. This is because of the antiseptic and the antimicrobial properties of this herb. If you do not particularly like the taste of Canadian goldenrod, you can mix it a bit with honey to make it easier to drink.

5. Get rid of mouth inflammations

6. Get rid of fungal infection

Canadian Goldenrod consists of saponins which can be useful in getting rid of certain types of fungal infection. If you are suffering from Candida, you can just take goldenrod in different forms. Some are saying that they can take goldenrod in fried form, but everything fried may not be that good for the body. People who have tried this, however, have stated that Canadian goldenrod rather tastes good when fried.

If there is one thing that can make you feel uncomfortable, it has a fever. When you think about it, this is the body’s way of telling you that it is trying to fight some kind of infection in your body. If you would like to feel more comfortable faster, taking goldenrod in tea form can be the answer. Canadian goldenrod has a diaphoretic property which makes the pores of the skin open to make releasing sweat easier to do.

8. Flush out the system

Canadian goldenrod can act as a diuretic which means that it will help increase the amount of urine and salt that will be released by the body. By doing this, the kidney and the bladder will be rid of toxins, so the possibility of acquiring kidney stones will lessen considerably. There are also other organisms that may get stuck in the kidneys and bladder as well. The use of Canadian goldenrod can help get rid of these organisms.

9. Prevent the onset of asthma

One of the reasons why people suffer from asthma is because of their exposure to certain types of allergies. If you are allergic to ragweed and you know that this can eventually lead to asthma, take Canadian goldenrod in tea form immediately. It may also be available in tincture form and solid form.