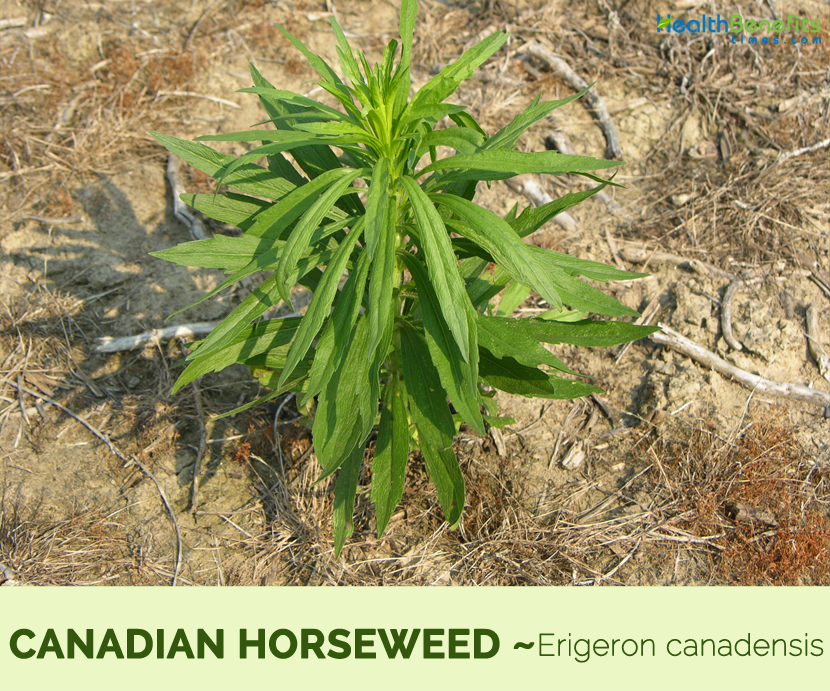 Native to North America and Central America, Canadian Horseweed or Canadian fleabane is one of the common names of Erigeron Canadensis which is an annual weed that belongs to the Asteraceae ⁄ Compositae (Aster family). Other common names of Canadian Horseweed are horseweed, Canadian fleabane, colts tail, mares tail, butterweed, Flea Wort, Pride weed, Daisy Fleabane, Philadelphia Fleabane, Sweet Scabious, Frost weed, Field weed and Mourning Widow. The plant can also be found in the European part of the former USSR, the Caucasus, Eastern and Western Siberia, the Far East, Central Asia, Scandinavia, Atlantic and Middle Europe, the Mediterranean, Asia Minor, Mongolia, Iran, Japan, Australia and China. The genus name of horseweed ‘Erigeron’ is derived from the Greek terms ‘eri’ denoting ‘early’ and ‘geron’ meaning ‘old man’, denoting the grayed and hairy fluff (pappus) that are attached to the seed tops. It is also known as mare’s tail or horseweed because of its leafy stem which looks like a horse’s tail. Moreover, this herb may also be named fleabane since it produces oil similar to turpentine that keeps fleas away or owing the fact that the tiny seeds of the herb have similarity to fleas.

The alternate leaves are elliptic, narrowly lanceolate, or narrowly oblanceolate, 0.8-3.1 in (2-8 cm) long and 0.08-0.31 in (2-8 mm) wide, with ciliate-serrate leaf margins. The leaves are sessile or almost sessile and are spaced closely together along the stem, appearing almost whorled. Lower leaves are short stalked and often have bristly hairs. Leaves are smaller higher up on the stem. The middle and upper leaves measure up to 8cm long and are 1cm wide and they are stalk less with smooth margins.

This plant has numerous flower heads that measure 0.08-0.16 in (2-4 mm) tall and 0.12-0.28 in (3-7 mm) wide and are crowded into branched terminal clusters. Flower heads are composed of white ray and yellow disc florets. The ray florets are white or purplish and very small, only reaching 0.02-0.04 in (0.5-1.0 mm) in length. Each head contains about 20 disc florets. The flowers typically bloom in June and can last until September. Fertile florets produce a dry pale tan to light gray-brown cypsela with a fluffy pappus and 2 to 3 mm long white bristles attached for wind dispersion. It is a prolific seed producer with approximately 700,000 seeds per pound.