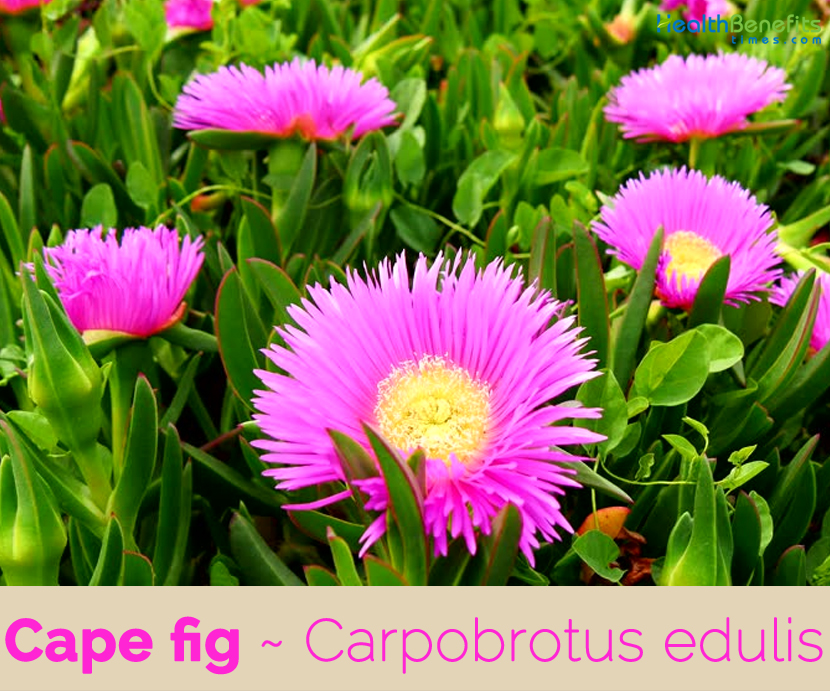 Carpobrotus edulis, Cape fig or Hottentot fig, is a ground-creeping plant is a member of the fig-marigold family Aizoaceae, one of about 30 species in the genus Carpobrotus. It was previously classified in Mesembryanthemum and is sometimes referred to by this name: Mesembryanthemum edule. It is a creeping, mat-forming herb native to South Africa, but has established in many cooler, very sandy soiled, Mediterranean regions of California and Australia. Few of the popular common names of the plant are Cape fig, Fig-marigold, Highway ice plant, Hottentot fig, Ice plant, Sour fig, Pigface, Yellow-flowering sour fig, Freeway iceplant, kaffir fig and introduced pigface. The name Carpobrotus means ‘edible fruit’.

Carpobrotus is derived from the Greek word karpos, meaning fruit, and brotos, meaning edible. The Latin words, edulis, means edible, and parviflorus means with small flowers. The Afrikaans common names ghaukum and ghoenavy come from old Khoi names for the plant. The name Hotnotsvy (Hottentots fig) was in use as long ago as 1685 and is probably derived from the fact that the colonists observed the Khoikhoi using this plant and eating its fruits. It got the name vy (meaning fig and pronounced fay) because the developing fruits superficially resemble figs but it is in no way related to figs (Ficus species, family Moraceae, the mulberry and fig family). It is now considered to be an invasive plant by the California Invasive Plant Council.

Cape fig is a moderately vigorous, creeping, upright branched, mat forming succulent species and member of the fig-marigold family Aizoaceae that grows about 1 foot tall and about 5 feet wide. The plant is found growing in coastal dunes, coastal habitats, on cliffs, sand-dunes, salt marshes, coastal scrubs, roadsides and railway lines inland, winter-wet depressions, sandy pastures, open woodlands, cliffs and river estuaries. The plant prefers flat, sandy ground, on loose sand dunes, lime-rich and brackish soils, and gravelly gardens, as well as in containers, rockeries, and embankments, and will cascade over terrace walls. The plant has shallow and fibrous roots. Stems are spreading or prostrate, about 8-13 mm in diameter and up to 2 m long forming large mats, sometimes rooting at the nodes.

The fleshy (i.e. succulent) leaves are stalk less (i.e. sessile) and oppositely arranged along the stems. Elongated leaves are succulent, up to 5 inches (12.5 cm) long and up to 0.5 inch (1.2 cm) thick, sharply 3-angled and triangular in cross-section, opposite, slightly connate at the base, bright green or slightly glaucous, waxy, often tinged red along edges and becoming generally reddish or orange with age. Adaxial and lateral surfaces are distinctly concave; keel denticulate, sometimes only in upper portion; tips obtuse to acute. The stems and leaves are also hairless (i.e. glabrous).

The large and showy yellow flowers (7-8.5 cm across) are borne singly at the tips of short side branches (i.e. solitary and terminal on lateral branches). They are borne on a fleshy stalk (i.e. they are pedicellate) and have numerous false ‘petals’ (30-35 mm long and 1.5-2.5 mm wide). The true petals resemble the fleshy (i.e. succulent) leaves and their bases are fused into a tube (i.e. perianth tube) 15-25 mm long around the ovary. Two of these petals are larger about 20-45 mm long, almost opposite and closely resemble the leaves. The structures that mimic petals are actually derived from modified stamens (i.e. they are petaloid staminodes). There are about 120-130 of these in each flower and they are arranged in 3-5 rows. They are yellow with whitish colored bases, but may turn pinkish with age. Each flower also has very large numbers of stamens (i.e. approx. 400-600) that are arranged in about 6 or 7 rows. The ovary has 8-10 compartments and is topped with the same number of styles (7-15 mm long). The flowering period extends from late summer to winter.

Fertile flowers are followed fleshy (i.e. succulent), globular or sub-globose fruit  that is about 1.4 inches (3.5 cm) in diameter, shaped like a spinning top, on a winged stalk. Fruit is initially green turning to yellowish to reddish-purple in color as they mature. These fruit consists of numerous seeds that are embedded in the sticky, sweet, jelly-like mucilage. The fruits can be eaten fresh and they have a strong, astringent, salty, sour taste. They are not as tasty as those of C. acinaciformis and C. deliciosus which are sweeter. 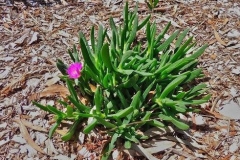 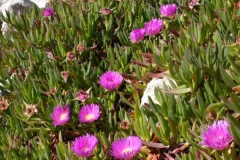 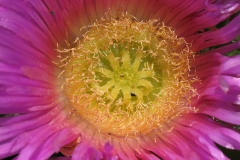 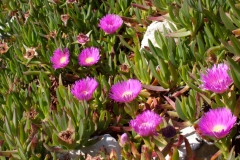 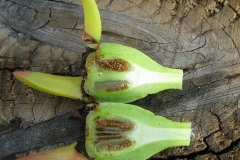 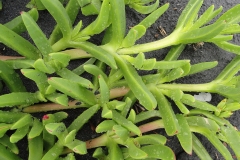 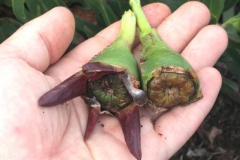 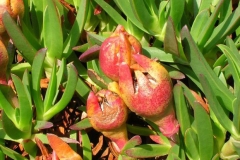 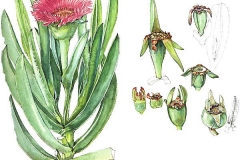 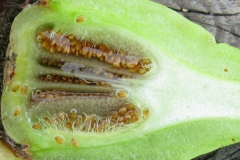 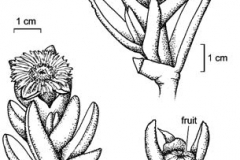 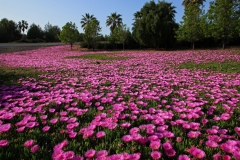 Carpobrotus acinaciformis has purple flowers, robust, short, greyish green, sabre-shaped leaves and tasty edible fruits. It is used to make a delicious jam, and grows in coastal sands usually close to the sea, in the Western Cape, from Saldanha to Mossel Bay.

Carpobrotus deliciosus has purple, pink or white flowers, almost straight, reddish green leaves and sweet fruits that make excellent sour fig preserve. It grows on sand dunes and in rocky grassland along the southern and eastern coast of South Africa from Riversdale in the Western Cape through the Eastern Cape to KwaZulu-Natal.

Carpobrotus dimidiatus has rose-purple flowers and grows on dunes in the Eastern Cape to KwaZulu-Natal and Mozambique.

Carpobrotus mellei is the only species that occurs in the fynbos on sandstone mountain slopes inland, it is found only in the Western Cape in the Hottentots Holland Mountains, the Langeberg and the Swartberg. It has pink or purple flowers, narrow small leaves and a small club-shaped fruit.

Carpobrotus muirii is similar to Carpobrotus deliciosus but has narrower leaves and is only found only in the Strandveld in the Western Cape, from De Hoop to Stillbaai.

Carpobrotus quadrifidus (including C. sauerae), has large violet-pink, pale pink or white flowers-the largest flower found in the family Mesembryanthemaceae-and straight, stubby grey leaves and grows in sandy lowlands along the west coast from southern Namaqualand in the Northern Cape to Saldanha in the Western Cape.

Cape fig is easily removed by hand pulling, making it a good target for community or school group restoration projects. Because the plant can grow roots and shoots from any node, all live shoot segments must be removed from contact with the soil to prevent re-sprouting. If removal is not possible, mulching with the removed plant material is sufficient to prevent most re-sprouting, but requires at least one follow-up visit to remove re-sprouts.

Because of the high water content of shoot tissues, burning of live or dead plants is not a useful method of control or disposal. Attempts to control Carpobrotus edulis by solarization or freezing also have been found to be ineffective.

a. Insects and fungi

There are currently no biological controls for Carpobrotus edulis. The iceplant scale insects, Pulvinariella mesembryanthemi and P. delottoi, have a small impact on some individuals, but would likely not be useful as a control tool. Additionally, occasional parasitism by dodder can be seen, but its impact appears to be minimal.

Because of the salty and astringent quality of the leaves and the fibrous to woody quality of stems, grazing is improbable to be an effective control for Cape fig.

The herbicide glyphosate has been effectively used to kill Carpobrotus edulis clones at concentrations of 2 percent or higher. Addition of 1 percent surfactant to break apart the cuticle on the leaves increases mortality. Mortality reportedly is greater when the water utilized is more acidic. Adding an acidifier to hard water before mixing with glyphosate can increase the effectiveness of the treatment. It takes several weeks for the clones to die off, and re-sprouting can occur from apparently dead individuals for several months afterward. Spraying should be avoided in areas in which native species are interspersed with Cape fig clones. Impacts to native species can be reduced by treating Cape fig in early or mid-winter when most native plants are dormant. Subsequent growth from seedlings needs to be controlled.