Trending
You are at:Home»Herbs and Spices»Traditional uses and benefits of China grass 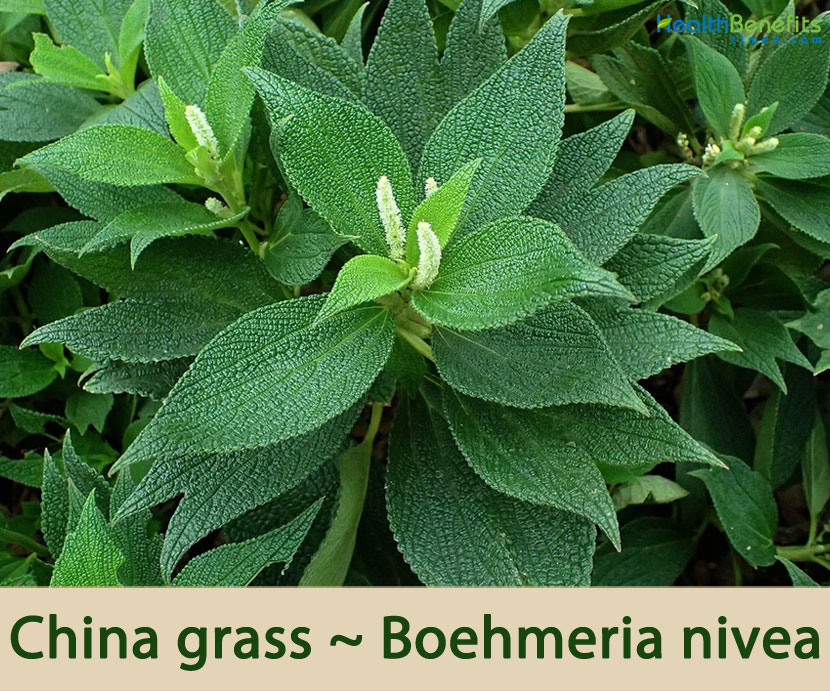 China grass or Ramie scientifically known as Boehmeria nivea is a flowering plant belonging to the nettle family Urticaceae. The plant is native to thickets, forest margins and roadsides, often in rocky places, in southern China to the Himalayas of Bhutan, Sikkim and Nepal, but is now cultivated in a number of tropical to subtropical climates around the world, including parts of the southeastern U.S. and California. Despite its strength, however, it has had limited acceptance for textile use in the U.S. In tropical Africa small-scale cultivation has taken place in Sierra Leone, Cameroon, Equatorial Guinea, Gabon, DR Congo, Kenya, Uganda, Tanzania, Mozambique, Madagascar and the Mascarene Islands but it has not become successful and its present distribution in tropical Africa is unclear. Some of the popular common names of the plant includes Ramie, China-grass, Chinese grass, Chinese silkplant, Rhea-fibre, White ramie, Rhea, false nettle, Ramie blanche, zhu ma, ramie de Chine, namban kara mushi, rami, ortiga blanca and ramio. The word “ramie” is derived from the Malay word rami.

Genus name honors George Rudolf Boehmer (1723-1803), professor of botany and anatomy at Wittenberg, Germany. Specific epithet means snow-white in probable reference to the underside of the leaves. It is harvested from the wild for local use as a food and also for medicinal use. It is highly cultivated for its high quality fiber or as an ornamental plant. It is also used in preventing miscarriages during pregnancy. The leaves are used as treatment of fluxes and wounds while the roots are used in the treatment of threatened abortions, colic of pregnancy, hemorrhoids, leucorrhoea, impetigo, etc. The root is edible when peeled and boiled. It has a pleasant and sweet taste. The leaves are furthermore used in making cakes. Ramie is planted to prevent soil erosion. The inner bark is a source of the known longest fiber used in making paper.

China grass is an erect, branched, herbaceous, monoecious, perennial, flowering plant that normally grows from 50 – 300 cm tall, with stems up to 2 cm in diameter, however occasional plants up to 7 meters tall are recorded. The plant is found growing in forest margins, thickets, and moist places along streams, roadsides, often cultivated and rocky places. It is ideally grown in sandy loam, well drained or sandy soil with a moderate supply of water; it does not tolerate waterlogged conditions. It is best known for providing a textile fiber of excellent strength and quality from the inner bark of the stems. It was used to make mummy cloths in Egypt during the period of 5000-3000 BCE. It is used in soil stabilization projects and also occasionally cultivated for its fibre or as an ornamental plant in southern Europe. Stem is usually unbranched and hollow, 8–16 mm in diameter, initially green and hairy, turning brownish and woody.

The simple leaves are arranged alternately along the stem and have long petioles. They are heart-shaped (cordate), broadly ovate, 7–15 cm (2.8–5.9 in) long and 6–12 cm (2.4–4.7 in) broad, with tapering pointed tip and have an accuminate leaf apex with finely serrated leaf margin. The upper surface of the leaves are green, roughened with few scattered hairs while the lower surface is white, except the nerves, and densely covered with appressed, matted, white hairs. This gives it a silvery appearance; unlike stinging nettles, the hairs do not sting. The true ramie or China grass is also called Chinese plant or white ramie.

Inflorescence is axillary, racemose, paniculate, 3–8 cm long, each branch bearing several crowded or well-separated flower clusters, mainly female with a few male branches towards base. Male clusters are small, usually with 3–10 flowers while female clusters are larger, usually with 10–30 flowers. Flowers are unisexual; male flower shortly pedicelled, perianth 3–5-lobed, stamens as many as lobes and incurved with persistent rudiment of pistillode.  Female flower is sessile, perianth tubular, 2–4-lobed, and greenish-white to pinkish in color, pistil with 1-celled ovary with 1 ovule, style exserted, slender and hairy on one side, stigma filiform. Male and female flowers are found on the same plant. Flowering normally takes place in between September to October.

China grass or Ramie is mostly used for fabric production. Outer bark is removed and then the fibrous inner bark is taken off and boiled before being spun into thread. Tensile strength is 7 time that of silk and 8 times that of cotton. It is often blended with cotton (55% ramie and 45% cotton). 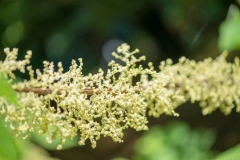 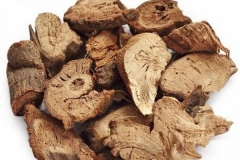 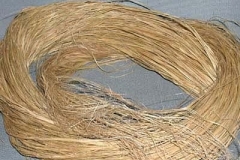 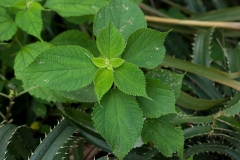 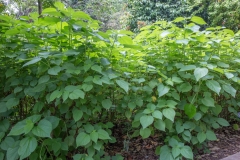 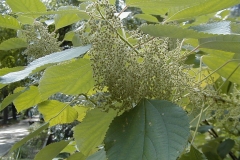 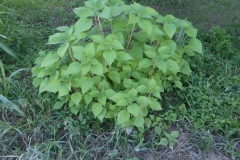 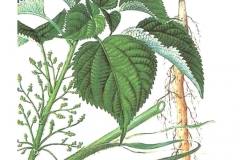 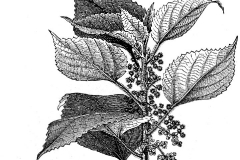 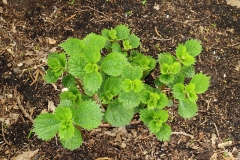 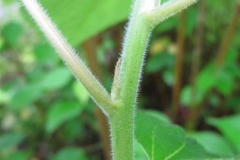 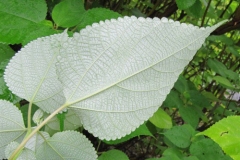