Trending
You are at:Home»Vegetables»Health benefits of Chinese Potatoes 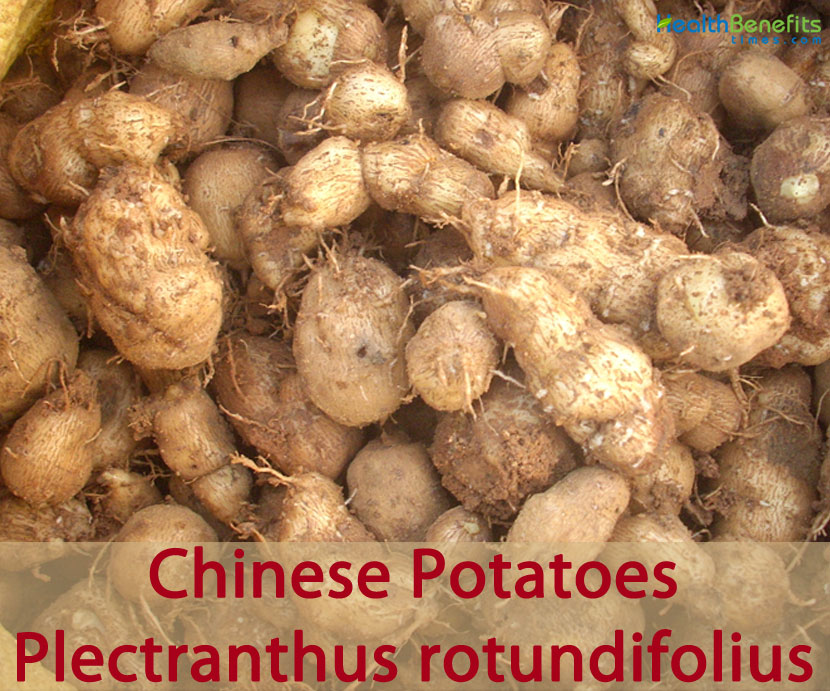 Plectranthus rotundifolius, synonyms Coleus rotundifolius and Solenostemon rotundifolius, commonly known as native or country potato in Africa and called Chinese potato in India, is a perennial herbaceous plant of the Lamiaceae ⁄ Labiatae (mints, menthes family). The plant is native to tropical Africa. It is cultivated for its edible tubers mostly in Madagascar, tropical and southern Africa, Sri Lanka, India, Malaysia and Indonesia throughout continental Asia to Peninsular Malaysia, Sumatra, Java, and the Moluccas and possibly in the Philippines. It is closely related to the coleus plants widely cultivated as ornamentals and is now again placed in the genus Coleus, after being placed in the defunct genus Solenostemon and in Plectranthus.

Hausa potato, Madagascar potato, Chinese-potato, Salaga-potato, Sudan-potato, Country-potato, Fra-fra-potato, Coleus, coleus potato, Kafir potato, Zulu potato, native potato, Zulu round potato, fabourama and koorka are some of the well-known common names of the plant. The plant used to be widely cultivated as a root crop in the savanah belt of Africa, though it has largely fallen out of favor there. It is still occasionally cultivated in Africa, but is much more commonly grown in Southeast Asia.

Chinese Potatoes is an aromatic, semi-succulent perennial herbaceous plant that normally grows up to 1 m tall. The plant cannot stand waterlogging and prefers a well-drained sandy loam, but can tolerate a range of soils and heavy clays are unsuitable. It is an herb with prostrate or ascending habit and a succulent stem reaching up to 15-30 cm in length, forming tubers in clusters around the base of the stem. The tubers are small and dark-brown. The stem is decumbent or ascending, quadrangular, with densely pubescent on the angles and roots at the nodes.

The plant produces egg -shaped, potato-like tubers usually 2 – 4 cm long, occasionally to 8 cm, occurring in clusters of 3 – 7 at the base of the stem. They are blackish, brownish, reddish-grey or whitish, with rough skin. The plant forms new tubers in clusters around the bases of the stems.

The leaves are rather thick, juicy, faintly aromatic when bruised and arranged oppositely. The petiole is 3-5 cm long and puberulous. The blade is ovate to sub-orbicular, measuring 2-6 cm long and 1.5-4 cm wide, wedge-shaped at the base, coarsely crenate at the margins, puberulous at the apex and with gland-dotted below.

The inflorescence is a terminal false spike, measuring 5-15 cm long, with distant whorls of 4-6 flowers. The flower-stalk is 1-2 mm long. The bracts are small. The sepal is bell-shaped, measuring 1.5-3 mm long, glandular-hairy and 5-toothed. The upper tooth is oblong, pointed and very short median teeth with rounded tip while the lower teeth is highly fused that forms an almost flat tip but ends abruptly in 2 widely apart acute tips. The flower is tubular and 2-lipped, measuring 7-12 mm long, light to dark violet, velvety and gland-dotted. The tube is strongly curved. The upper lip is very short and with 4-lobed while the lower lip is boat-shaped. There are 4 stamens that curved within the lower lip. They are up to 2.5 mm long; shortly unite at the base and envelope the style. The style is 2-fid and slightly exceeding the stamens. Flowering occurs between February and August. Normally the crop reaches maturity in 5-8 months.

Fertile flowers are followed by fruit consisting of 4 nutlets, but rarely developing. 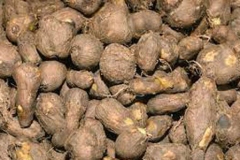 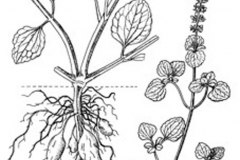 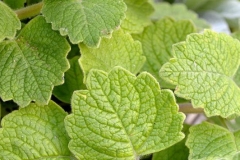 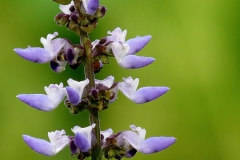 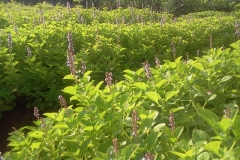 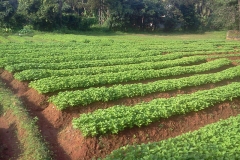 The Chinese Potato is an aromatic herb that affects heart contractions and blood clotting. It also lowers blood pressure.

The Hausa potato has a cytotoxic and anti-tumor promoting activity, which can be used to treat cancer.

In Ghana, dysentery is treated with Chinese Potatoes. Leaves are boiled, and drank or groundnut paste added to it to make a meal for the sick person. Potatoes are also cooked with the peel, filtered and drank at intervals of help with diarrhea or dysentery. This not only stops dysentery, but it also energizes the person.

Leaf is used to treat a wide range of digestive issues including, bloating and abdominal discomfort.

Chinese Potatoes has an antispasmodic action, making it valuable in treating respiratory complaints, including asthma and bronchitis.

The leaves have a strong camphoraceous aroma and are used as a body rub to cleanse, deodorize the skin, and treat skin conditions.

Chinese Potatoes are difficult to store. Traditionally the tubers are stored in the ground under a tree where it is cooler than in the open. When stored in this way under hot conditions the special taste of Chinese potato usually lasts for two months only, after which the tubers become bland and are no longer considered a delicacy. Chinese potato is also packed in bags or baskets stuffed with straw, but if these are kept under warm conditions the tubers will soon shrivel and are no longer edible. To keep the tubers longer, people put them in pots sealed with cow dung. The small tubers needed for the next planting season are stored in this way. In cooler conditions, such as in highland regions or in South Africa, storage is easier.