Trending
You are at:Home»Herbs and Spices»Know about Christmas Rose (Black Hellebore) 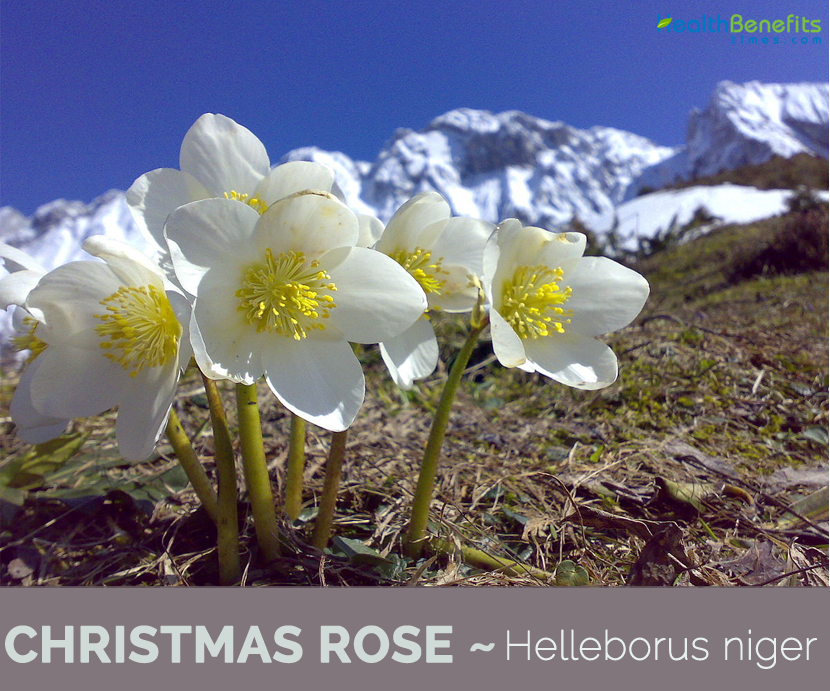 Helleborus niger with many common names including Christmas Rose, Black Hellebore, Hellebore, Lenten Rose, bear’s foot, brumal rose, Christmas plant, Christopher’s herb, Christ’s herb, clove-tongue and St Agnes’ rose is an evergreen perennial flowering plant in the buttercup family, Ranunculaceae.  Although the flowers resemble wild roses (and despite its common name), Christmas rose does not belong to the rose family (Rosaceae). It is called the Christmas rose because the flowers bloom in mid-winter near Christmas. Bloom time can vary significantly based upon the degree of harshness of the winter climate. The plant is native to alpine areas and open woodlands in southern and central Europe, Greece and Asia Minor. Genus name comes from the Greek words bora meaning food and helein meaning injures/destroys in reference to the plant’s toxic leaves, stems and roots which are toxic to humans if swallowed. Specific epithet comes from the Latin word niger meaning black in reference to the color of the roots.

Christmas rose (Black Hellebore) is an evergreen perennial low-growing flowering plant that grows about 9–12 in (23–30 cm) tall. The plant is found growing in moist, organically rich, humusy, and neutral to alkaline, well-drained soils in part shade to full shade. Roots are short and black. The stem is erect, glabrous, branched, woody at the base and almost leafless. The leaves are basal, persistent, alternate, palmately cleft, with long petioles. They consist of 7-9 leaflets which are dark green, shiny, tough, narrow and lanceolate. Leaves are glabrous, dark green above with a lighter underside. In the St. Louis area, leaves remain evergreen in moderate winters, but may become somewhat tattered in extremely cold winter areas where temperatures dip below zero, particularly if foliage is not protected by snow cover.

The flower is white with a greenish margin, reddish on the outside. It is hanging and splayed. There are 5 broadly ovate, campanualate bracts with red brown borders, which tend toward each other. The petals are altered to nectaries. There are numerous yellow stamens. The fruit is a pod-like, many-seeded follicle with a curved beak and horizontal stripes. The seeds are matte black, ovate and have a long swelling on them.

One of the more controversial herbal remedies still in use today is hellebore, which has been known for thousands of years as both a poison and a medicinal remedy for certain conditions. Most species within this genus are poisonous, but there are some that can be manipulated by expert herbalists to be administered safely, as there are some powerful effects of the herb that can be beneficial to our health. Listed below are few of the health benefits of Christmas rose (Black Hellebore)

Increasing blood flow to the pelvic region, mostly in females, can be unsafe in some cases, such as during pregnancy, but in other situations, a substance that functions as an emenagogue can be very helpful in regulating periods and improving overall reproductive health. Hellebore does just that, but as revealed before, should only be administered or considered after thorough discussions with your doctor that may bring about other, safer options for the same effect. (1)

Very small doses have been associated to reducing spasmodic disorders in children, such as epilepsy or other muscle/neurological conditions. The powerful chemicals found in hellebore can calm that part of the body and mind, but as always, there is a high risk with any type of hellebore use, so always refers a medical professional first to see if there are other viable options. (2)

While forcing yourself to excrete does not seem like something that you would ever want to do, there are certain situations where emptying your stomach is the best thing for you, mostly if you have consumed something toxic in too large of a quantity. A purgative (laxative) basically makes your body’s rejection mechanisms go into overdrive and cause your body to force substances out by loosening up the bowel passages. White and black hellebores were both used as extremely effective purgatives in ancient history, particularly in Greece. However, due to its extremely toxic nature, consuming the plant to force it out of the stomach is just as dangerous and can result in death or a number of other side effects. (3)

Although the white and black hellebore tend to get most of the attention, green hellebore also has a known use as a fever reducer, and was widely used in the treatment of typhus and other fevers in American antiquity. This can help speed healing and ease distress and discomfort, but should only ever be administered by a trained herbalist of physician.(4)

In many countries, due to food quality standards and living conditions, parasites are still a very real problem, and things like intestinal worms can worsen existing nutritional deficiencies and make life miserable. Small doses of hellebore, perhaps because of its highly toxic nature, have been related with successfully eliminating worms in the digestive tract. (5)

Because of hellebore’s ability to cause urination and excretion, it has occasionally been used for people trying to lose weight quickly. If you want to reduce water weight and clear out your gut, then it can achieve that, but it can be very dangerous to force your body into this sort of emptying process on a regular basis, i.e. eating disorders.

Individuals who suffer from a condition such as nervous system disorders may come across as having a mental disorder. Helleborus may help to act as a homeopathic remedy in helping to restore some of the lost concentration and inability to focus. These individuals can’t remember much and they often drop items or go completely blank suddenly without warning. In extreme cases, they may even develop a condition similar to Alzheimer’s disease.

People, suffering from headaches or migraine accompanied by mental dullness, perhaps following any injury or surgery, may find Helleborus beneficial as a homeopathic remedy. Often, such headaches start on in the back side of the head or in the neck. In such cases the sufferer may have a pressure to pull down the head towards his/ her body for relief. The pain caused by the headache or migraine may be accompanied by vertigo and light-headedness that may result in vomiting.

Helleborus is recommended when someone is experiencing blank stares, involuntary sighs, and if they happen to be in a dark mood that doesn’t seem to go away with time or adequate sleep.

There may be swelling in the brain tissue that could be caused by meningitis. Helleborus may work as a homeopathic remedy to help the body naturally reduce the actual swelling or for symptoms such as extreme hot or cold feelings or even a sort of stupor.