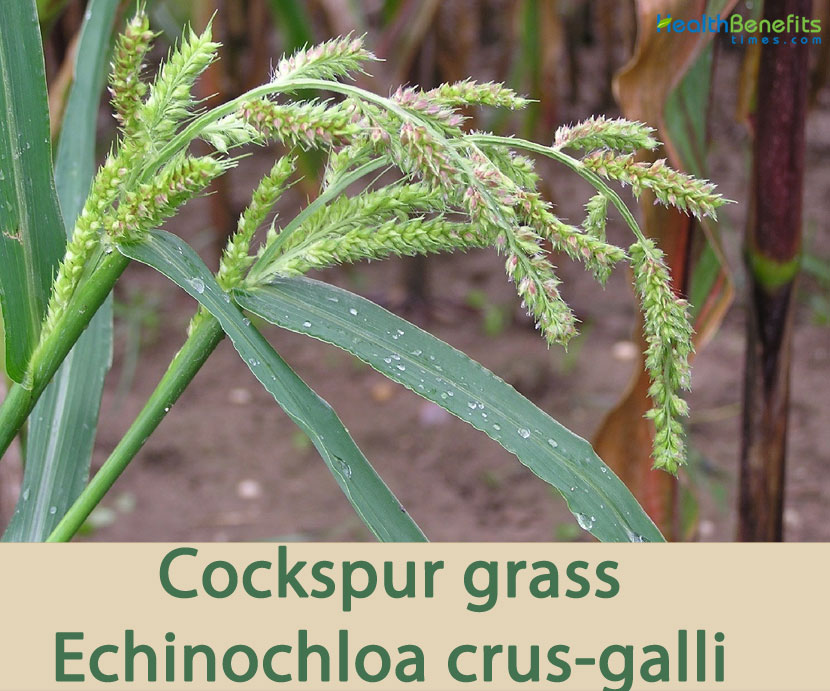 It is considered one of the world’s worst weeds, it reduces crop yields and causes forage crops to fail by removing up to 80% of the available soil nitrogen. It acts as a host for several mosaic virus diseases. Heavy infestations can interfere with mechanical harvesting. Individual plants can produce up to 40,000 seeds per year. Water, birds, insects, machinery, and animal feet disperse it, but contaminated seed is probably the most common dispersal method. The plant is occasionally gathered from the wild for local use as a food and medicine. It is sometimes cultivated for its edible seed in India, and is also sometimes grown in soil reclamation projects.

Cockspur grass is a tall, robust, non-rhizomatous, quick growing, warm-season annual grass that normally grows about 0.8–1.5 m tall. The plant is found growing in ditches or stream beds, in cultivated fields, paddy fields, swampy places, along roadsides, ditches, waste places, waterways, wetlands, wet meadows, floodplains, lakeshores and fallow fields. The plant grows best in rich, moist soils with high nitrogen content, but it can also thrive on sands and loamy soils. The plant has fibrous root system. Stems are erect, hairless, spreading or lying horizontally on the ground and bending upwards but rooting from nodes in contact with the soil. Stems are 5-150 cm (2in.-5ft) long, coarse, smooth, usually round in cross-section but occasionally much flattened.

Elongated leaves are alternate, 5-50 cm (2-20 in.) long, 6-22 mm (¼-¾ in.) wide, flat, deep green or somewhat purplish, hairless or with 1 to 3 solitary hairs near the base of the blade. Leaf sheaths are usually hairless, occasionally with a few hairs along the edges, and lower sheaths are commonly purplish. The ligule (membrane where the leaf joins the sheath) is lacking, the juncture smooth and pale to purplish. Nodes are hairless; sometimes the lower nodes are minutely hairy.

The panicle (loose and non-symmetrical cluster of flowers) is green or purple, densely branched, protruding, slightly drooping and can range from 8-30 cm in length. The erect branches are sessile (attached to the main stem) and 5 cm long. Ovoid spikelets (individual flower with a cluster) are pale green to dull purple, densely arranged on branches, and are short-bristly along veins. Fertile lemma (specialized bracts enclosing a floret) is pale yellow, ovate to elliptic, acute, lustrous, and smooth and 3-3.5 mm long. Flowering normally takes place in between July to September.

The whole spikelet drops away when mature, leaving a naked stem behind. Grains (seeds) are 1.3 to 2.2 mm long, hard, shiny, pale yellow, and rounded on one surface but flattened on the other. It is enclosed within the persistent lemma and palea. 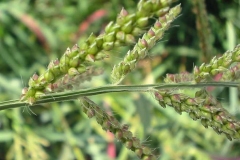 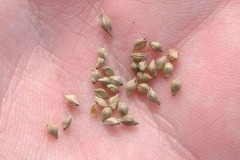 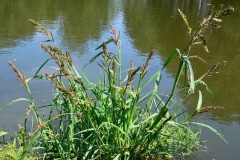 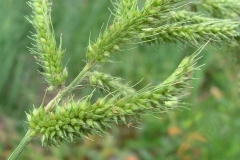 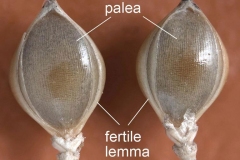 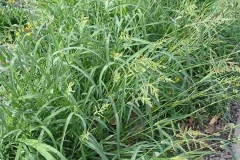 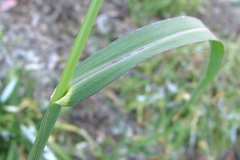 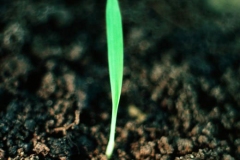 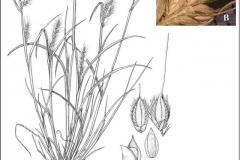 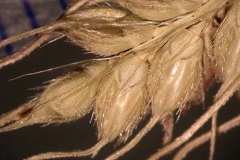 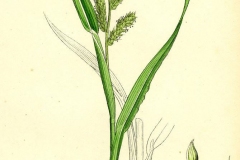 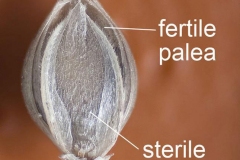 Hand weeding can be effective if adequate labor is available, but when young, E. crus-galli is hard to distinguish from young rice, making hand weeding very difficult.

Bhatia et al. found that high populations of E. crus-galli in rice fields were due to new seed added every season. Pot and field studies revealed that 97.7% of the seed reserves were exhausted in one season, and by the third season the soil was free of viable seed. Farmyard manure and other organic fertilizers can be major sources of weed seeds, including E. crus-galli, but these lose their viability after being subjected to anaerobic fermentation for one month.

Deep water flooding (up to 22 cm) can provide good control of E. crus-galli in rice. Water-sowing, a method of direct-broadcast sowing of rice began in California, USA, during the 1920s as a cultural method to control E. crus-galli var. crus-galli by continuously-flooded water management.

The use of Azolla in transplanted irrigated rice failed to suppress E. crus-galli var. hispidula, which increased by 226.4%, whereas some weeds were suppressed. Field and laboratory studies in Asia have indicated that some rice cultivars exhibited strong allopathic effects against E. crus-galli.

Different tillage systems in soybean and maize fields in northern Italy have been shown to profoundly alter the weed community, with species linked to increased disturbance being annuals, such as E. crus-galli.

Tsukamoto describes using virulent isolates of Exserohilum monoceras and Cochliobolus sativus to achieve an approximate 80% reduction in dry matter of different botanical varieties of E. crus-galli. Zhang studied optimal temperature and dew-point for the development of E. monoceras on E. crus-galli and E. colonum after inoculation. E. monoceras continues to be the most studied potential bio control agent, with Tosiah et al. evaluating its effects at different leaf development stages and on different varieties of E. crus-galli. In surveys in Malaysia, Tosiah et al.  found E. monoceras, E. longirostratum and Curvularia lunata among the fungi present on diseased E. crus-galli plants. E. monoceras was consistently found associated with the disease, virulent, stable and with the ability to produce spores profusely in culture, suggesting that it could be used as a biocontrol agent.

Li Jing et al. (2013) evaluated Cochliobolus lunatus as a potential mycoherbicide for barnyard grass, and found that one particular virulent strain was highly pathogenic at the 1- to 2.5-leaf stages, and was safe to rice. It is suggested that this strain could be a potential mycoherbicide for barnyard grass control in paddy fields in the future. Zhang et al. found high mortality in E. crus-galli from a strain of Bipolaris eleusines, with no pathogenicity to rice, maize or wheat. Jyothi et al. (2013) report trials with C. lunatus and Alternaria alternata, achieving 100% mortality of the target weed and no effect on rice.

In a review of research progress on mycoherbicides for control of E. crus-galli in rice in China, Zhang et al. (2011) suggest that mass production and formulation technologies have proved to be the major stumbling blocks that hinder bio-herbicide development.

The introduction and spread of E. oryzoides and E. phyllopogon in California, USA, have caused rice farmers to rely on herbicides such as molinate or propanil to protect the crop from serious losses in yield and grain quality. Propanil-resistant E. crus-galli was initially found in Arkansas, USA, during 1990, and was the result of dependence upon propanil for a long period. Propanil formulations tank-mixed with quinclorac, thiobencarb or pendimethalin were effective for controlling resistant and susceptible biotypes when applied post-emergence, whereas quinclorac and mixtures of quinclorac with pendimethalin and thiobencarb were very effective when applied pre-emergence. Malik et al. (1996) reported herbicide resistance in E. crus-galli against butachlor and thiobencarb. In Spain, E. crus-galli var. hispidula (in rice) showed resistance to quinclorac, whereas E. crus-galli var. crus-galli (in maize), showed resistance to atrazine. An analysis of 4 isoenzymes from 3 different biotypes of E. crus-galli with tolerance to quinclorac from Spain showed different enzyme PAGE patterns.

In the Philippines, Juliano et al. (2010) confirmed for the first time that E. crus-galli populations were resistant to both chloroacetamide (butachlor)- and acetanilide (propanil)-group herbicides commonly used in direct-seeded rice in the Philippines. In Arkansas, Riar et al. (2012) describe resistance to acetolactate synthase (ALS)-inhibiting herbicides. Panozzo et al. (2013) also found resistance to at least one ALS-inhibiting herbicide in 14 E. crus-galli populations in Italy. It is suggested that ALS-resistant, and especially ALS- and ACCase multiple resistant barnyard grass are threatening the sustainability of Italian rice crops due to the lack of alternative post-emergence herbicides.

Ma et al. (2014) discuss the control of quinclorac-resistant E. crus-galli in China, and found that that penoxsulam and bispyribac-sodium gave effective control.