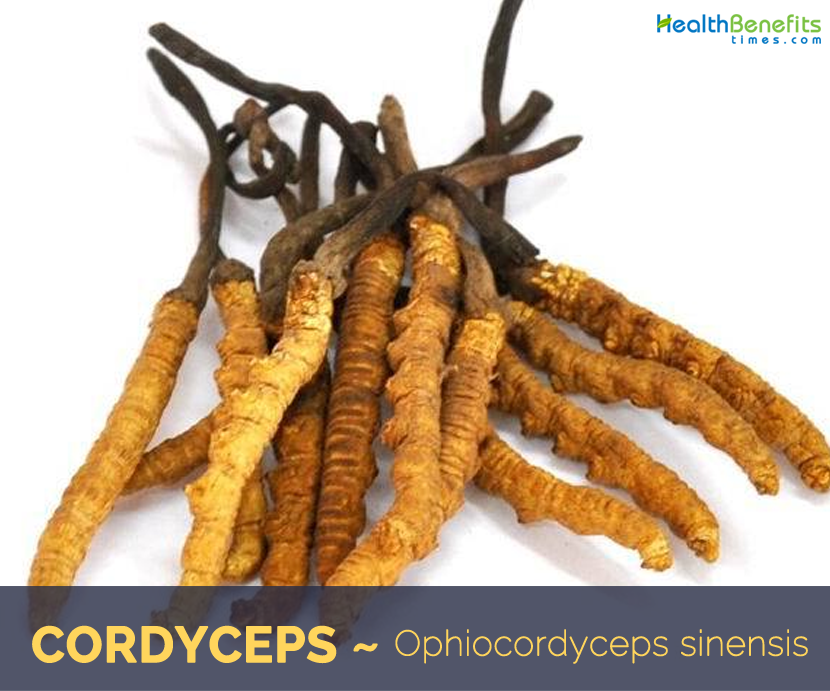 Ophiocordyceps sinensis (formerly known as Cordyceps sinensis) is an entomopathogenic fungus. It is also known as Cordyceps, caterpillar fungus, yarsha gumba, vegetable caterpillar, dong chong xia cao, Vegetable caterpillar  and is commonly mistaken as a mushroom but is actually a parasitic fungus, native  to China, Tibet, India, Bhutan, and Nepal. Cordyceps is the composite of a genus of fungus that grows on the larva of insects. To date, more than 350 Cordyceps-related species have been found worldwide based on fungus and/or insect host. Cordyceps sinensis is formed when the fungus attacks moth caterpillars infecting it with spores during fall then develops over the winter. When spring comes, the fungus has completely killed and wrinkled the caterpillar growing and producing a long slender fruiting body. The fruiting body which is composed the remains of the caterpillar and the fungus are then hand collected, dried and preserved to be used as an herbal medicine. Cordyceps sinensis has been used for centuries in traditional Asian medicine and Chinese medicine, although only as of late that the western medicine has taken notice for its medicinal benefits.

Ophiocordyceps sinensis consists of two parts, a fungal endosclerotium (within the caterpillar) and stroma. The stroma is actually the upper fungal part and is dark brown or black, but can be a yellow color when fresh, and longer than the caterpillar itself, usually 4–16 cm (1-6 inches). It grows singly from the larval head, and is clavate, sub-lanceolate or fusiform, and distinct from the stipe (stalk). The stipe is slender, glabrous, and longitudinally furrowed or ridged.

The fertile part of the stroma is the head. The head is granular because of the ostioles of the embedded perithecia. The perithecia are ordinally arranged and ovoid. The asci are cylindrical or slightly tapering at both ends, and may be straight or curved, with a capitate and hemispheroid apex, and may be two to four spored.

It is sweet in taste and neutral in nature, and it can replenish the kidney, soothe the lung, stop bleeding and eliminate phlegm. The fungus C. sinensis has been used for the treatment of fatigue, cough, hypo sexuality, asthenia after severe illness, renal dysfunction, and renal failure.

Cordyceps originated in traditional Chinese medicine about 5,000 years ago and is one of the world’s oldest “super foods.” The health benefits of cordyceps were first described in ancient Chinese medical texts, and folk healers have used it alone or combined with other Chinese herbs to fight various diseases. They have also been featured in Christian, Hindu, and Chinese religious ceremonies as a symbol of immortality and longevity.

Some of the first people to discover the mushrooms’ benefits observed animals growing strong after eating the wild fungus. Herders and farmers would later use cordyceps powder for tonics and teas to help increase milk production and reproductive capacity of their livestock. Others later began drying them in the sun to preserve their many benefits.

Ophiocordyceps Sinensis (Yarsagumba) improves general health and well-being. It cleanses the body and boosts immunity, which helps to prevent several diseases. It is beneficial for the heart, lungs, reproductive organs, brain and blood vessels. In general, it improves blood circulation, oxygen uptake, stamina, and endurance. Therefore, it is popular among athletes and is used for increasing their performance. However, Cordyceps supplements are very expensive but available in form of extract capsule, powder capsule, liquid extracts and tablets forms. Listed below are few of the health benefits of cordyceps

Cancer is the second main cause of disease-related mortality throughout the world. However, related therapy strategies are still limited to surgery, radiotherapy, and chemotherapy. Due to the limitations of surgery and radiotherapy and the side effects of chemotherapy, there is increasing interest in developing antitumor drugs from natural products. Research have shown that cordyceps has antitumor activity in various cancers through several pathways. Both natural and cultured cordyceps have demonstrated antitumor effects.

Traditionally, Cordyceps is used to reduce fatigue and stress and to improve the physical performance. It boosts the ATP level in the liver and muscles, which help to increase the energy level, decrease fatigue and improve performance.

Additionally, it also reduces and delays the lactic acid accumulation in the muscles, which decreases exhaustion and stress, improves physical performance and increases the stamina. The similar results are found in a rat research using swimming test.(1), (2), (3), (4)

Research studies on the effects of cordyceps have come up with several exciting results, especially in relation to cardiovascular health. Research showed that patients given a powdered supplement of cordyceps were considerably less likely to suffer heart failure. This is mainly due to the anti-inflammatory and antispasmodic properties of the herb, which can prevent heart arrhythmias and other complications.(5)

Research suggests that cordyceps improve endurance and stamina due to their ability to boost one of the top sources of energy during exercise called ATP (adenosine triphosphate). Cordyceps contain an important nucleic acid needed to make ATP called adenosine. Research has found that higher ATP production helps athletes keep up with intense workouts and extend the timeframe where they can stay active at a high level. Another research also found that cordyceps would improve exercise performance in older adults aged 50 to 75 years old.

Testosterone is essential for normal sperm development. It activates genes in Sertoli cells, which encourage differentiation of spermatogonia. Cordyceps has traditionally been used for the enhancement of sexual function in human beings. Evidence shows that C. sinensis and C. militaris help to improve reproductive activity and restore impaired reproductive function. The administration of C. sinensis enhanced libido and sexual activity, and restored impaired reproductive function in both sexes in human.

6. Protective effect on the Kidney

Ophiocordyceps Sinensis has been used for the treatment of renal diseases, such as chronic nephritis, chronic pyelonephritis, chronic renal dysfunction or failure, and nephritic syndrome. The C. sinensis extract considerably improved renal function via antiapoptotic and anti-inflammatory activity in rats subjected to 60 minutes of ischemia and following 3 days of reperfusion of the kidneys. The result indicates that C. sinensis plays a potential therapeutic role in renal transplantation.

Yarsagumba (Cordyceps Sinensis) helps to reduces chronic stress in the brain. Chronic stress causes chronic inflammation in the brain, which may result in various mental disorders and imbalance in neurotransmitter levels. It is responsible for memory impairment and decline in cognitive functions. Chronic stress can also cause depression, mood disorders, and neuro-degeneration. Neuro-degeneration can lead to the development of amnesia, dementia, Alzheimer’s disease and Parkinson’s disease. Yarsagumba reduces inflammatory markers, which indicates improvement in brain health. It is likely to restore the balance of neurotransmitters and lowers chronic stress.(6)

Cordyceps has been used to prevent and delay aging and to reduce the effects of aging. It is commonly recommended by herbalists and experts of traditional medicine for the weakness, fatigue, and impotence linked with aging. The anti-aging effects are attributed to its antioxidant action. Its extract increases the activity of catalase, superoxide dismutase, and glutathione peroxidase and decreases the activity of monoamine oxidase and reduces lipid peroxidation level. Further, it improves the neurological functions, especially memory and learning. It is also likely to prolong the lifespan by inhibiting oxidative stress. Traditionally, it is used in elderly people for preserving strength, restoring the health and treating geriatric problems. It is also used after illness for reducing physical debility and mental stress.(7), (8)

Cordyceps has been traditionally used in Chinese medicine for a variety of respiratory problems that included upper respiratory infections, bronchitis and asthma. Cordyceps is believed to increase the oxygen absorption capability of the body, thus improving the respiratory functions.

Cordyceps has been used for the treatment of chronic hepatitis and related diseases. There are several ways in which it contributes to the treatment of and protection against liver disease. First, cordyceps has a potential enhancing effect on the immunological function of patients suffering from chronic hepatitis B and from post-hepatic cirrhosis. Second, cordyceps was shown to prevent and reverse liver fibrosis via degradation of collagen in rats with liver cirrhosis induced by dimethylnitrosamine, inhibit proliferation of hepatic stellate cells in vitro, down regulate intercellular adhesion molecule-I and CD126 in human fibroblasts, and decrease expression of transforming growth factor-β and platelet-driven growth factor. Third, cordyceps decreased lipid peroxide levels in serum and hepatic tissue, and lowered serum TNF-α in bacillus calmette guerin plus LPS-induced liver injury in mice.

Cordyceps (Yarsagumba) help to improves memory and retention span by lowering chronic inflammation in the brain.  It also exerts anti-oxidant action by increasing the level of glutathione and superoxide dismutase. It helps to prevent the decline of mental functions and improves the memory.(9)

Medical use of Cordyceps – Yarsagumba

Cordyceps (also called Caterpillar fungus, Cordyceps Sinensis & renamed Ophiocordyceps Sinensis) is a type of fungi (edible mushrooms and medicinal fungi), which is used for increasing strength, stamina, physical performance and libido and for reducing fatigue and stress. Cordyceps supplements commonly consists of Cordyceps Sinensis and well-known for its adaptogenic, aphrodisiac and immunity booster actions in traditional medicine. It is commonly used in Traditional Chinese Medicine and Tibetan Medicine for its aphrodisiac action and for increasing physical performance and endurance. Because it is commonly used for its adaptogen and aphrodisiac characteristics, sometimes called Himalayan Viagra.