Trending
You are at:Home»Fruits»Facts about Cornelian Cherry (Cornus mas) 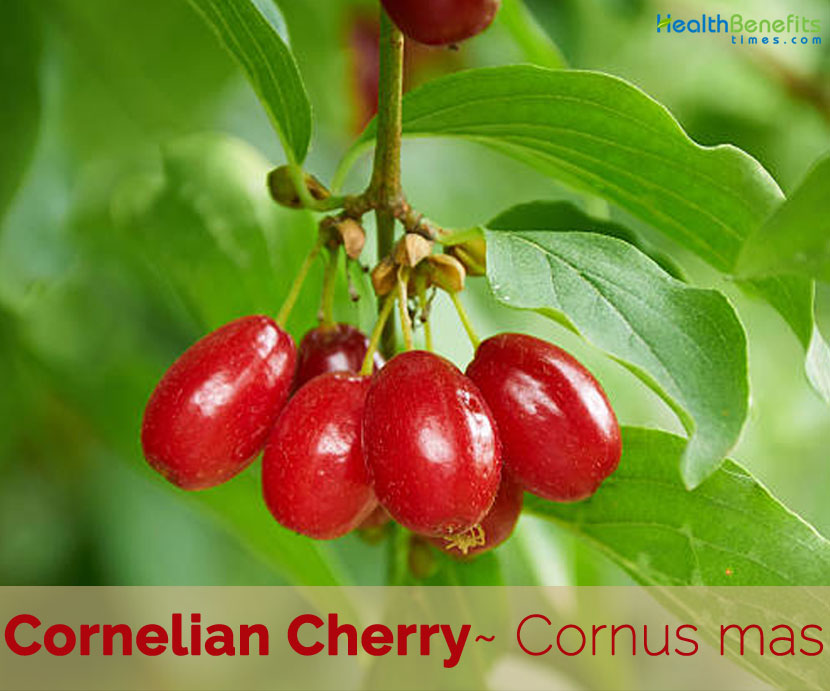 Genus name comes from the Latin word cornu meaning horn in probable reference to the strength and density of the wood. Cornus is also the Latin name for cornelian cherry. Specific epithet comes from the Latin word for male in reference to the absence of fruits that sometimes occurs for several years after new plants begin to bloom. Common name refers to the cherry-like fruits which resemble in color the semi-precious gemstone carnelian (or cornelian).

Cornelian cherry is a light-demanding and medium to large, slow-growing, and deciduous, multi steamed shrub or small tree that normally grows about 20-25 ft. (6-8m) tall and spread up to 15 ft. (4.5 m) wide and short bole is usually up to 25 cm in diameter, occasionally to 45 cm. The crown is regular, bushy, hemispherical, and may expand more horizontally up to 5 m. The trunk is straight, sometimes with sinuous or multiple stems, the branches ends often drooping. The bark is grey-brownish, peeling off in scaly flakes like crocodile skin. The young shoots are hairy grey-greenish, becoming hair less lately. The plant is found growing in woodlands, especially in calcareous soils, undergrowth in light, mainly oak and hornbeam forests, also at forest edges and in shrubby thickets on slopes. The plant can be easily grown in average, medium, well-drained soil in full sun to part shade and normally prefers moist, organically rich soils. It also a long living tree, surviving up to 300 years.

The plant bears deep brown branches, while the twigs are greenish. The leaves are arranged opposite to one another with a short stalk and measure about 4 cm to 10 cm in length and 2 cm to 4 cm in width. The shape of the leaves vary from ovate to oblong with an entire margin that is shortly acuminate and supplied with visible parallel veins. Leaves are dark green above and lighter below. They turn to mahogany red in autumn.

Cornelian cherry trees bear small hermaphrodite yellow flowers measuring about 5 mm to 10 mm in diameter. Each flower has four small yellow petals. These flowers appear in clusters of 10 to 25 flowers towards the end of winter sometime between February and March, much before the leaves of the new growth season appear.

Fertile flowers are followed by spherical or elliptical, drupe, with an average length of 1.5–2 cm long and 1.5 cm in diameter and a weight of 1.6–2.6 g with a smooth and shiny rind and containing a single seed. The fruit is edible when it falls and is spread by animals. Fruits are edible, although sour tasting fresh off the plant. Fruits may be used for making syrups and preserves. 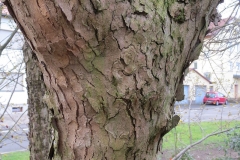 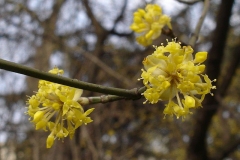 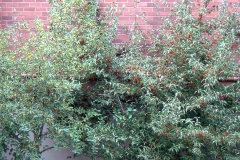 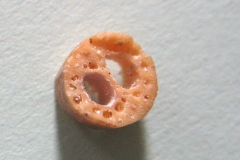 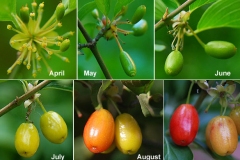 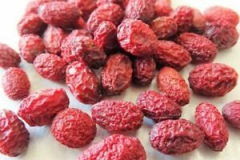 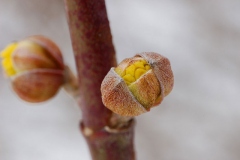 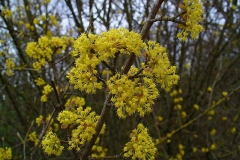 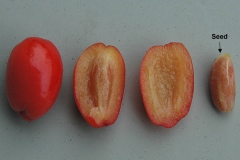 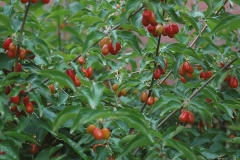 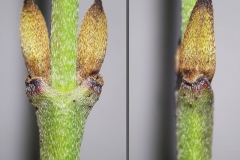 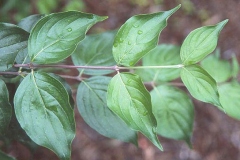 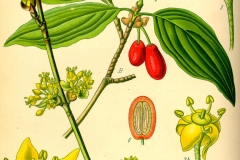 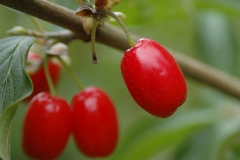 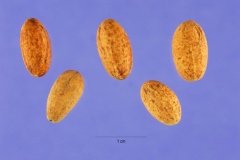 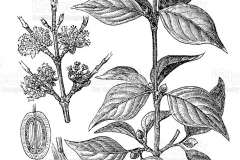 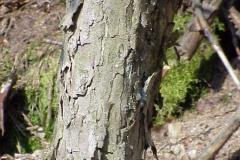 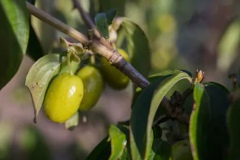 Cornelian cherry is native of the temperate zones of Eurasia, with a Pontic and Mediterranean distribution. It occurs from central and southern Europe (Pyrenees, France, Italy and Balkan Peninsula) to Asia Minor (Turkey, Caucasus). Though, it can also be commonly found all over Europe outside its natural range, as it has been exported for centuries first as a fruit and medicinal plant, then as an ornamental shrub, and is now naturalized in some countries. Though its natural northern limits are Belgium and Germany, it has been planted in colder regions: e.g. in Oslo, Corneli-cherry trees in parks and gardens ripen every year. It has also been exported to North America as a landscape ornamental, and to China as an ornamental tree and for medical uses.