Trending
You are at:Home»Herbs and Spices»Facts and benefits of Cuckoo Pint (Arum) 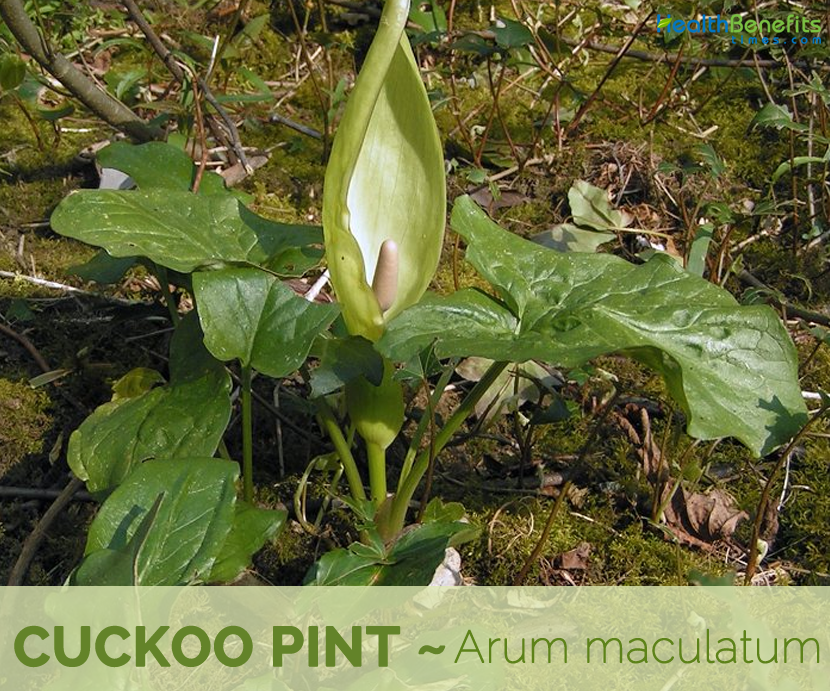 Cuckoo Pint (Arum) scientifically known as Arum maculatum is a common woodland plant species of the Araceae family. It is known by an abundance of common names including Snakeshead, adder’s root, adder’s meat, arum, wild arum, arum lily, lords-and-ladies, devils and angels, cows and bulls, cuckoo-pint, Adam and Eve, bobbins, naked boys, starch-root, wake robin, friar’s cowl sonsie-give-us-your-hand, cheese and toast and jack in the pulpit, bloody man’s finger, bobbin’ Joan, bobbing Jane, brown dragons, bulls and cows, calf’s foot, cobbler’s thumb, cocky baby, devil’s ladies and gentlemen. The plant is native to the Southern Europe and northern Africa as well as Turkey and Caucasus. Arum is from the Greek word ‘aron’ which is variously described as meaning ‘climbing’ or ‘poisonous plant’. Maculatum is ‘speckled’ after the spots which appear on the leaves.  Traditionally, these are supposed to be spots of Christ’s blood when the plant grew under the cross but the Latin ‘maculatus’ also means ‘pollute’, ‘taint’ and ‘dishonor’ as well as ‘spot’ so the name is more likely to be a result of the spots spoiling the look of the leaves. Similarly the name “lords-and-ladies” and other gender related names refer to the plant’s likeness to male and female genitalia symbolizing copulation.

Cuckoo Pint (Arum) is a shade-loving tuberous perennial that grows about 30-38cm tall. The plant is found growing in woods and along shaded ditches and hedgerows on calcareous soil. The plant prefers moist, well-drained and reasonably fertile soils, humus rich soil, and shady damp calcareous soil. The plant has large, deep, starchy root. In mature specimens the tuber may be as much as 400 mm below ground level. The plant only has a flower stem which is about finger thick and upright.

Arum has large tuberous roots, somewhat resembling those of the Potato, oblong in shape, about the size of a pigeon’s egg, brownish externally, white within and when fresh, fleshy yielding a milky juice, almost insipid to the taste at first, but soon producing a burning and pricking sensation. The acridity is lost during the process of drying and by application of heat, when the substance of the tuber is left as starch. When baked, the tubers are edible, and from the amount of starch, nutritious. This starch of the root, after repeated washing, makes a kind of arrowroot, formerly much prepared in the Isle of Portland, and sold as an article of food under the name of Portland Sago, or Portland Arrowroot, but now obsolete. For this purpose, it was either roasted or boiled, and then dried and pounded in a mortar, the skin being previously peeled.

Leaves are large about 45cm long, shiny ‘arrow’ shaped leaves that are dark green but can be variegated with white or purple patterning or spots.

Flowers are borne on a poker-shaped inflorescence called a spadix, which is partially surrounded in a pale green spathe or leaf-like hood. The flowers are hidden from sight, clustered at the base of the spadix with a ring of female flowers at the bottom and a ring of male flowers above them. Flowering normally takes place in spring (April–May).

Above the male flowers is a ring of hairs forming an insect trap. Insects, especially owl-midges Psychoda phalaenoides, are attracted to the spadix by its faecal odor. The insects are trapped beneath the ring of hairs and are dusted with pollen by the male flowers before escaping and carrying the pollen to the spadices of other plants, where they pollinate the female flowers. The spadix may also be yellow, but purple is the more common.

In autumn, the lowest ring of flowers form a cluster of bright scarlet, attractive berries, which remain long after the leaves have withered away, and on their short, thick stem alone mark the situation of the plant. In spite of their very acrid taste, they have sometimes been eaten by children, with most injurious results, being extremely poisonous. One drop of their juice will cause a burning sensation in the mouth and throat for hours. In the case of little children who have died from eating the berries, cramp and convulsions preceded death if no medical aid had been obtained.

Medical Use of Cuckoo Pint

Arum maculatum has a long history of medical use. While these do not provide cancer natural cures, it can help alleviate a range of different symptoms. The berries are highly toxic and should be avoided. The large tuberous root, however, has long been supposed to have medicinal powers. The root is full of starch and has been used in many ways. Some of the medicinal uses of Arum maculatum include:

Arum maculatum is described to help alleviate the symptoms of sore throats. It is taken as a homeopathic remedy and the tincture helps to reduce swollen membranes.

Root at one time was used as a diuretic and stimulant. It has dramatic and unpredictable results and this has meant that it is rarely used in this way now without supervision from a trained professional.

An ointment or tincture from the root has been used to help alleviate symptoms of rheumatism. It is applied to the skin, however given the extreme toxicity of the plant; this should be done with great care and professional advice sought first.

Appropriate dose of arum depends on several factors such as the user’s age, health, and several other conditions. At this time there is not enough scientific information to determine an appropriate range of doses for arum. Keep in mind that natural products are not always necessarily safe and dosages can be important. Be sure to follow relevant directions on product labels and consult your pharmacist or physician or other healthcare professional before using